The waste is collected and processed to produce raw gas, which is then converted into electricity. Alternatively, following further mechanical and chemical processes, and purification, the gas is compressed. This is called compressed biogas (CBG), and has pure methane content of over 95 per cent.

CBG is exactly similar to the commercially available natural gas in its composition and energy potential. With a calorific value of approximately 52,000 kJ per kg and other properties similar to that of compressed natural gas (CNG), CBG can be used as an alternative, renewable automotive fuel. Given the abundance of biomass and waste in the country, the potential for CBG production from various sources in India is estimated at about 62 million tonnes per annum. Thus, CBG has the potential to replace CNG in the automobile, industrial and commercial segments in the coming years.

There are multiple benefits of converting various kinds of waste into CBG on a commercial scale. These are:

The government launched the Sustainable Alternative Towards Affordable Transportation (SATAT) scheme in October 2018, which will benefit vehicle users as well as farmers and entrepreneurs. CBG plants are proposed to be set up mainly through independent entrepreneurs. The CBG produced at these plants will be transported in cylinders to the fuel station networks of oil marketing companies (OMCs) to be marketed as green transport fuel. Entrepreneurs will be able to separately market the other by-products from these plants, including bio-manure and carbon dioxide, to enhance returns on investment.

The government plans to roll out 5,000 CBG plants across India in a phased manner. This initiative is expected to generate direct employment for 75,000 people and produce 50 million tonnes (mt) of bio-manure for crops. In February 2019, the government handed over the 100th letter of intent to a CBG entrepreneur (producer) under the SATAT scheme.

At the state level, Haryana and Punjab are expected to see investor interest in bio-CNG plants that run on paddy and wheat straw, thanks to the central government’s October 1, 2018 announcement of incentives for utilising these agricultural residues, instead of burning them. Of late, the burning of paddy straw has become a major environmental concern.

The Haryana government signed an MoU in September 2018 with Indian Oil Corporation Limited (IOCL) for setting up bio-CNG plants based on paddy straw and other agri-waste in the state. The first such compressed biogas plant (CBP) is likely to be set up in Kurukshetra.

The MoU will open up opportunities for the setting up of 200 CBPs in the state by 2023, with a total capacity of about 1,000 tonnes per day (tpd) of CBG. This will result in the annual production of about 0.4 mt of CBG. According to government estimates, a biogas plant with 100 tpd of agro residue feedstock capacity can produce about 10 tpd of compressed biogas and 30 tpd of dry manure. Such a plant costs about Rs 350 million and requires 6-10 acres of land. 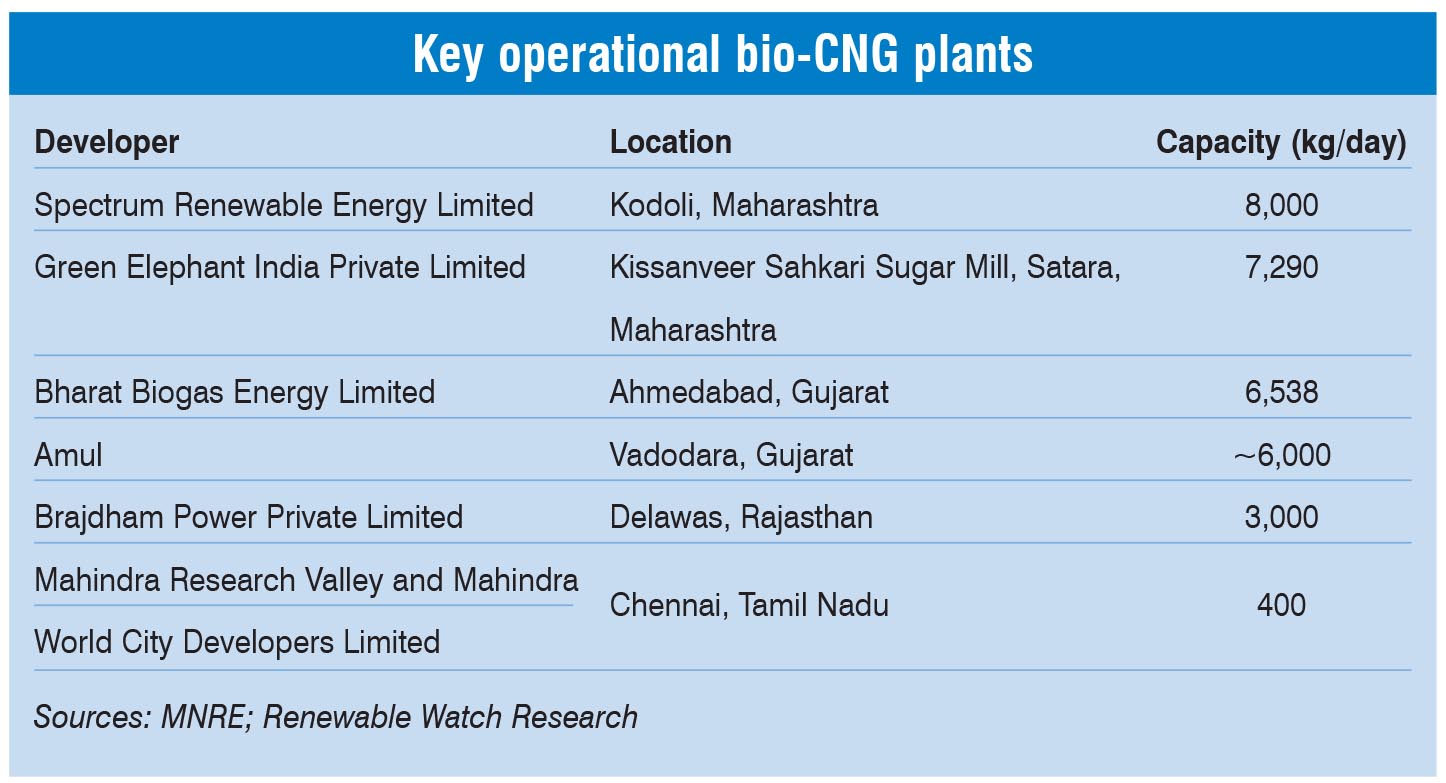 The private sector is also driving the momentum. For example, IOT Infrastructure and Energy Services, a 50:50 joint venture between state-owned IOCL and Germany’s Oiltanking GmbH, is upgrading its biogas plant to manufacture bio-CNG for vehicles.

“We have been running a power plant at Namakkal on biogas and realised that by increasing its methane concentration, we can convert it into bio-CNG for automobiles,” Vivek Venkatachalam, managing director, IOT, told the Economic Times in January this year.

Now, with an investment of Rs 250 million, and the implementation of a technology developed by IOCL’s research and development team, the plant will be converted into a bio-CNG unit with a daily output of 12,000 kg beginning July 2019.

IOT is also looking to set up five greenfield projects in the next two to three years, for which it is in talks with agri-waste companies that can supply feedstock. The cost of each of these units will be in the range of Rs 500 million-Rs 650 million. Further, IOT is in talks with OMCs to sell bio-CNG. The idea is to set up manufacturing units in clusters where feedstock is available, and then sell the product in areas nearby.

In another initiative, in May 2018, the UK-based anaerobic digestion project developer Rika Biofuels announced an investment of $100 million-$150 million to build bio-CNG plants in Punjab, as part of its efforts to find sustainable solutions to paddy straw burning. It signed an MoU with the Punjab Bureau of Industrial Promotion and the Punjab Energy Development Agency. The agreement has paved the way for the setting up of biogas and bio-CNG plants in the state.

The company specialises in processing “problem” feedstock, including high volume manure and agricultural waste such as crop straw. The Punjab Infrastructure Development Board will facilitate regulatory clearances and incentives by the state government, while the latter will arrange land parcels for the same under the State Industrial and Business Development Policy, 2017 and the State New and Renewable Sources of Energy [NRSE] Policy, 2012.

These plants will be based on a new, patented anaerobic digester concept and straw extruding technology. Rika plans to build more than 10 bio-CNG plants, creating up to 1,000 jobs across the entire operations and supply chain with the aim of having the first plant operational in 2019. The capacity of each plant will be  around 100 mt of paddy straw intake daily.

According to K. Krishan, chairman, CVC Biorefineries Private Limited, “Replacing imported LNG with farm-waste-based CBG will enhance energy security and foreign exchange outflow. In October 2018, Union Minister for Petroleum and Natural Gas Dharmendra Pradhan announced a target of 15 mt of bio-CNG, which amounts to 20.4 billion cubic metre or 56 million metric standard cubic metre per day. The potential, with optimal utilisation of manure and municipal solid waste plus sewage/sludge, is much higher.”

Press mud/Filter cake is rich in organic matter and is one of the by-products generated during the sugar manufacturing process, which makes it suitable for biogas generation. Nordic Cleantech in Chennai has experience in setting up pilot- and commercial-scale biogas plants for demonstrating biogas potential from press mud. Its engineers have developed a unique process for increasing the loading rates based on the dry fermentation process that will decrease the digester size by 40 per cent and reduce the operating costs. Given the current demand for bio-CNG, the power generated from press mud will play a crucial role as an alternative to natural gas, while revenues generated will add to the bottom line of sugar mills. In addition, valuable organic fertiliser by-products can be produced from the digestate (>80 per cent).

A standard 3,500 tonnes of cane per day sugar mill in India can generate about 100-125 tpd of press mud. One tonne of press mud, on an average, can generate 85-100 cubic metres of raw biogas. A 100 tpd capacity biogas plant can generate 850-950 kWh of power, or close to 4,000 kg of purified methane gas (CH4 >95 per cent). The biogas plant can be operated for 365 days in a year, while press mud generated during the crushing season can be stored and used during the off-season. To encourage the bio-CNG sector, the central government is offering a subsidy of up to Rs 40 million. The government is also offering a guaranteed bio-CNG offtake price of Rs 46 per kg.

The petroleum minister, during a visit to a bio-CNG plant in Germany, stressed  the need for responsible pricing of fuel. He further sought the intervention of the members of the Organization of the Petroleum Exporting Countries to ensure sustainable fuel prices. “It is high time to move to responsible pricing, one that balances the interests of both the producer and the consumer. We also need to move to transparent and flexible markets for both oil and gas,” he said.

Although compressed and bottled bio-methane can easily be used in CNG vehicles without modification, there are no legal standards or guidelines issued by the government – neither for using biogas as a transportation fuel nor for injection in the natural gas grid. In the absence of proper legal standards, project developers will need regulatory approvals for grants and permissions from different government departments such as the Petroleum Explosives Safety Organisation and the Ministry of Environment, Forest and Climate Change.

The pace of hydropower capacity addition in recent years has been rather slow, particularly in the north-eastern region, which has a significant untapped hydro potential. Central sector PSU North Eastern Electric Power Corporation Limited (NEEPCO), […]

Energy for All: Call for collaboration to fulfil shared interests

By Rajiv Ranjan Mishra, Managing Director, Apraava Energy Development is meaningless un­less it is inclusive and driven by a clearly defined purpose. As a developing country faced with the challenges of reviving economic growth and […]