After a long lull, the power sector is set to witness a mega initial public offering (IPO) by private thermal power producer Bajaj Energy Limited (BEL). Set up in 2008, BEL is a part of the diversified Bajaj Group. With an aggregate portfolio of 2,430 MW in Uttar Pradesh, BEL has filed its papers for a Rs 54.5 billion IPO. BEL’s IPO plan is significant because it is the first thermal power company to go public in 10 years. The last IPO in the thermal power segment was launched by Adani Power and RattanIndia Power (formerly known as Indiabulls Power) in 2009.

The primary reason for BEL to go public is to raise funds to buy 100 per cent stake in Lalitpur Power Generation Company Limited (LPGCL), another subsidiary of the company, which operates the 1,980 MW Lalitpur thermal power plant (TPP) in Uttar Pradesh. BEL currently has a share of about 20.69 per cent in LPGCL while the remaining is held by other Bajaj Group companies.

BEL has a total installed capacity of 2,430 MW – 450 MW from its five coal-based power plants (90 MW each), and 1,980 MW from LPGCL’s Lalitpur coal-based TPP. The 90 MW projects are located in Barkhera (Pilibhit), Maqsoodapur (Shahjahanpur), Khambarkhera (Lakhimpur), Kundarkhi (Gonda) and Utraula (Balrampur) in Uttar Pradesh. Each of the five power plants comprises two generating units of 45 MW each. The plants commenced commercial operations in the first half of 2012. 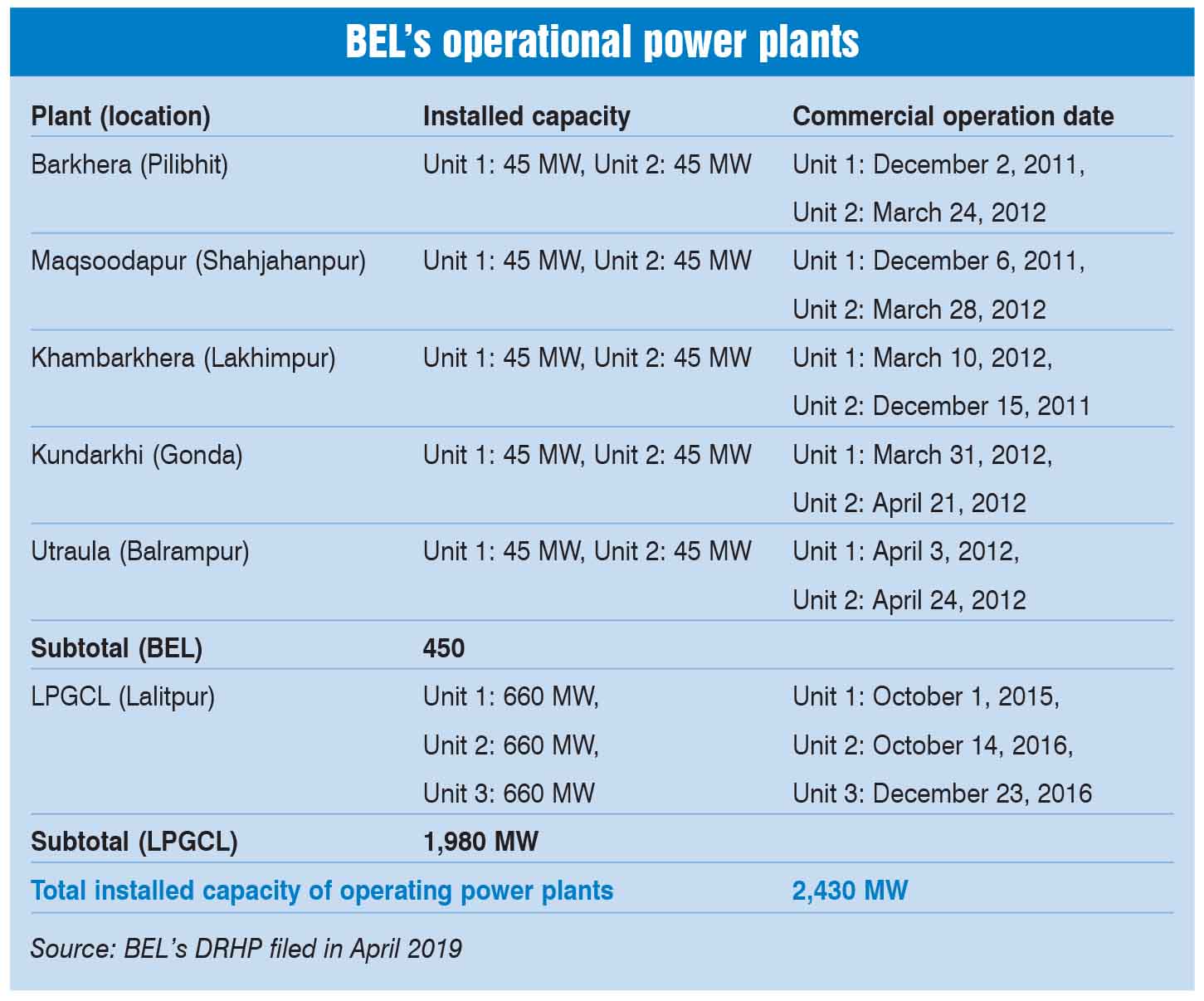 The Lalitpur coal-based power plant is located across Mirchwara and Buragaon in Uttar Pradesh. The plant is based on supercritical technology and comprises three units of 660 MW each. The commercial operation of the first unit began in October 2015, while the second and third units began commercial operations in October 2016 and December 2016 respectively. The plant’s PPAs with UPPCL are valid through 2041.

In April 2019, BEL filed the draft red herring prospectus (DRHP) with the Securities and Exchange Board of India (SEBI) for its IPO. The company plans to raise Rs 54.5 billion through a public issue, comprising a fresh issue of up to Rs 51.5 billion and an offer for sale of Rs 3 billion by promoter Bajaj Power Ventures Private Limited (BPVPL). BEL intends to use the net proceeds from the IPO for purchasing 69.9 million equity shares of LPGCL from BPVPL and Bajaj Hindusthan Sugar Limited,  thereby completely acquiring LPGCL’s 1,980 MW power plant.

In the past, BEL had faced the issue of unilateral termination of PPAs for its five 90 MW power plants by UPPCL. In July 2017, UPPCL issued a termination notice to BEL citing high tariffs of Rs 7.63 per unit, which was more than the utility’s average procurement cost of about Rs 4.10 per unit. BEL approached the Uttar Pradesh Electricity Regulatory Commission (UPERC), which ruled in its favour, calling the termination of the PPAs unjust. The commission ordered a reduction of the tariff by around 50 paise per unit.

Power offtake risks and backing down of power by discoms remain key risks for gencos in the sector. The availability of firm long-term PPAs and FSAs will help BEL mitigate power procurement and fuel supply risks. In addition, BEL will need to install the necessary emission control equipment by 2021 in line with the revised environmental regulations. Failure to do so may lead to penalties, or even the shutdown of units.

Going forward, BEL will consolidate its power business with the acquisition of LPGCL. The acquisition is expected to provide greater synergies in operations, which can be utilised in its future power projects. In the years to come, BEL plans to expand its presence in the power sector through both organic and inorganic routes.