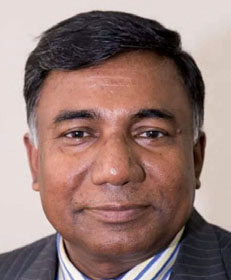 Bangladesh has a vision to boost its installed generation capacity to 24,000 MW by 2021, with the aim of becoming a middle-income country. A decade ago, less than 50 per cent of the people had access to electricity. Today, 93 per cent have access to electricity, underlining the impressive progress made by the Bangladesh government in achieving its goal of providing electricity to all citizens by 2021. Further, the Power System Master Plan (PSMP) 2016 envisages importing 9,000 MW of power from neighbouring countries by 2041. The objective of cross-border electricity trade (CBET) is to fulfil the power needs of participating countries in the region by utilising the available resources, including harnessing the hydro potential, tapping the solar power potential of Indian states such as Gujarat and Rajasthan, and meeting the peak demand for electricity in the region. It is necessary for Bangladesh to explore additional investment opportunities to develop hydropower plants with equity participation in Bhutan, Nepal and the north-eastern region of India. It is also essential to unlock regional power market opportunities through professional, diplomatic cooperation to intensify the progress of CBET across the region.

Globally, more and more countries are undertaking power pooling to make regional grids more robust in order to increase the reliability of supply and reduce investment needs to minimise supply costs. However, in South Asia, such electricity trade initiatives are insignificant at present, although there is some bilateral trade (around 2,300 MW) taking place. The South Asian region comprising Bangladesh, Bhutan, India, the Maldives, Nepal, Pakistan and Sri Lanka is a home to a quarter of the world’s population. The region is experiencing a rapid growth in energy demand, concomitant with economic growth and industrialisation. However, electricity supply has not kept pace with the demand. As a result, the region faces significant power interruptions and inadequate energy supply remains a major challenge. Trade in electricity can help bring down prices, mitigate power shocks, relieve shortages, facilitate decarbonisation and provide incentives for market extension and integration.

Countries in this region have rapidly growing energy demand, significant seasonal complementarities in energy demand, and large though unevenly distributed primary energy generation potential across countries and seasons. Their national electricity systems face several challenges. Electricity supply has not kept pace with demand and is frequently interrupted. At the same time, there is under-utilisation of the available generation capacities due to fuel supply shortages and price controls. Electricity shortages not only impose hardships on households, but also hinder business activity and new investments. Electricity generation and transmission shortages have also prompted the use of costly, energy-inefficient, and pollution-intensive power sources, including aged and highly polluting coal-fired plants and diesel generators. The fuel structure varies significantly across the region. Coal constitutes as much as 35 per cent of the total commercial energy requirement in India. In Bangladesh, natural gas (67 per cent) is the dominant fuel. In Pakistan, oil constitutes 46 per cent and natural gas 38 per cent of the total energy consumption. Sri Lanka is largely dependent on oil (87 per cent), whereas Nepal and Bhutan have high  hydro potential. Integrating and enhancing all these sources would help establish a prosperous and secure power market in the South Asian region. Bangladesh is a country with limited options for primary fuel. However, the region offers substantial, though unevenly dispersed, fuel resources such as fossil fuel, hydro and renewables. The region’s combined hydro potential of 350 GW offers huge scope for tapping clean energy as well as dealing with the persistent power supply challenges.

Electricity trading is a common practice in many regions around the world, benefiting those countries immensely. Bangladesh sees ample opportunities for regional cooperation and meeting its power needs through cross-border electricity trade. In fact, it is already importing electricity from neighbouring countries. 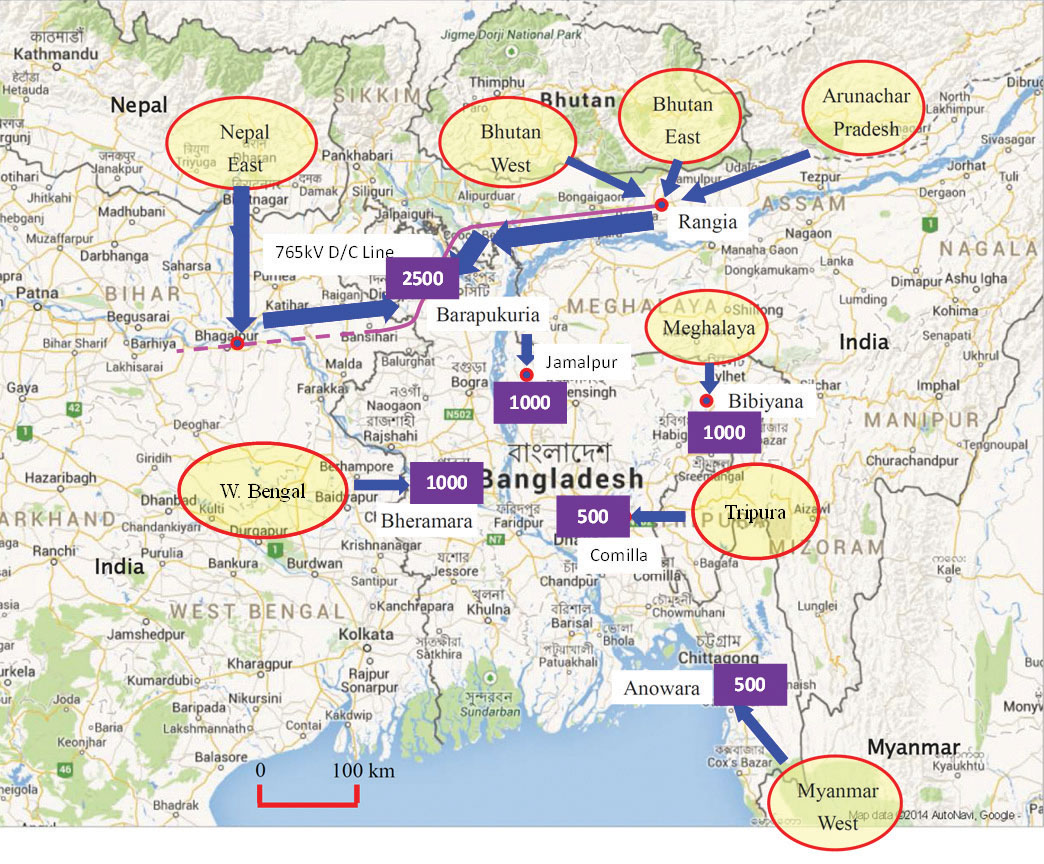 In an attempt to broaden regional cooperation on CBET, several other projects are in progress. For instance,  construction of the 765 kV Katihar-Parbotipur/ Barapukuria-Bornagar transmission highway is under consideration. Plans have also been made to import 500 MW of power through the 400 kV establishment of the Surjamaninagar (India)-Comilla (Bangladesh) transmission line. Bangladesh currently imports 1,160 MW of power from India and imports of another 3,500 MW from India are in the pipeline. During the visits of the Bhutanese prime minister and the Nepalese energy minister, discussions were held to facilitate joint investments and CBET with the two countries. The signing of an MoU is awaited for the implementation of a hydropower project in Bhutan through a joint venture. Talks are also on for importing power from Nepal and Myanmar. Meanwhile, negotiations are under way to import 500 MW of power from Nepal, from a GMR project, through the designated nodal agency of the Indian government.

Looking at Bangladesh’s current energy mix, 56.5 per cent is coming from gas-based power plants, which is a major challenge. Natural gas production is passing through tough times, leading to a huge shortage. The government has not discovered any new gas field in the last decade. Gas shortage is an important concern, as uninterrupted supply is a must for power plants to remain active and reduce the supply-demand gap. The shortage could also affect economic growth. As such, Bangladesh’s energy mix is likely to experience a major shift, from gas to coal and to nuclear. In the current competitive landscape, fuel diversification is the next big challenge for Bangladesh to become the Asian tiger.

Electricity import brings several benefits such as reduced power supply costs, import bill and investments. The saved foreign exchange and investment could be diverted to other sectors where it would bring higher socio-economic improvements. Electricity imports would not only reduce the dependence on imported gas (which is a volatile market), but would also help address the energy security issue, which is a key concern for Bangladesh. Bangladesh is soon going to come up with a CBET policy, a significant part of which is the option to export as well as import power. The country will have to participate in regional cooperation in order to increase its GDP growth and ensure sustainable development and economic freedom to achieve its goal of becoming a developed country by 2041. Bangladesh will benefit not only through CBET by importing electricity but also through export because of the favourable seasonal diversity and fuel diversity. For instance, it has low demand during the winter, whereas Bhutan, Nepal and parts of India have high demand due to the heating load. Meanwhile, hydropower generation declines during this season. Therefore, Bangladesh can export its surplus power to its neighbouring countries during the dry season.

Regional electricity cooperation may include sharing of cross-border infrastructure, establishing regional power producers and enhancing competition across regional markets. This would need, among other things, investment in new border interconnections and the development of harmonised codes, policies and regulations for the overall growth of the power sector. Given the significant potential of hydropower generation in South Asia, this is expected to play a major role in any future strategy for regional power cooperation. Effective cooperation can only be achieved and sustained if the countries of the region recognise the long-term benefits of the association and work towards harnessing the potential. Ultimately, cooperation in the power sector presents a win-win situation for the South Asian region as a whole as well as for the participating countries. In order to ensure effective regional cooperation for power sector development, Bangladesh has been actively participating in different activities organised under BBIN (Bangladesh, Bhutan, India, Nepal Initiative), BIMSTEC (Bay of Bengal Initiative for Multi-Sectoral Technical and Economic Cooperation), SASEC (South Asia Subregional Economic Cooperation Programme), D-8 (Developing-8) and UN-ESCAP (United Nations Economic and Social Commission for Asia and the Pacific). This has paved the way for new opportunities in regional cross-border trade. Further, significant progress has been made in establishing a BIMSTEC grid for electricity exchange among the member countries.