Over the past couple of years, there has been an increasing focus on the implementation of smart meters in the country. It is a key component of various central government schemes and programmes such as the Ujwal Discom Assurance Yojana (UDAY), the Integrated Power Development Scheme (IPDS), and smart grid pilots. Energy Efficiency Services Limited (EESL) is implementing the Smart Meter National Programme for replacing 250 million conventional meters. Besides this, various states have issued mega tenders for the procurement and installation of smart meters. Notably, bulk tendering with demand aggregation has brought down meter prices. The Central Electricity Regulatory Commission (CERC) and the Central Electricity Authority (CEA) have also notified regulations and standards to be followed by the utilities for setting up a robust communication network. A look at the various central and state initiatives driving smart meter uptake in India…

Launched in 2014, the IPDS envisages the installation of smart meters with supervisory control and data acquisition (SCADA) systems in all urban areas. A project cost of Rs 8.30 billion and a grant of Rs 5 billion have been approved by the government under the scheme. However, disbursements have been nil, as of February 2019. Nearly 4.1 million smart meters are targeted to be installed under the scheme by 21 discoms across 12 states. The states can either procure them on a stand-alone basis or through an aggregator such as EESL and PFC Consulting.

The Ministry of Power (MoP) has sanctioned 12 smart grid pilot projects with 50 per cent funding from the government. All these projects (excluding the Smart Grid Knowledge Centre at Manesar) involve the implementation of advanced metering infrastructure (AMI), along with other functionalities such as outage management system, SCADA and demand response. The pilot projects envisage the implementation of 170,000 smart meters, of which over 132,000 have already been installed. Five smart grid projects under the National Smart Grid Mission (with 30 per cent funding from the MoP), which are currently under way, also entail AMI/smart meter implementation.

EESL is implementing the Smart Meter National Programme under which it aims to replace 250 million conventional meters with smarter versions. In this context, EESL has signed agreements with various state discoms to undertake smart metering projects. EESL is implementing its proven model of bulk procurement, demand aggregation and monetisation of savings.

EESL has released two tenders so far. The latest was launched in March 2018 for procuring 5 million smart meters on a pan-Indian basis. It witnessed the participation of 16 manufacturers. The results have not yet been announced. 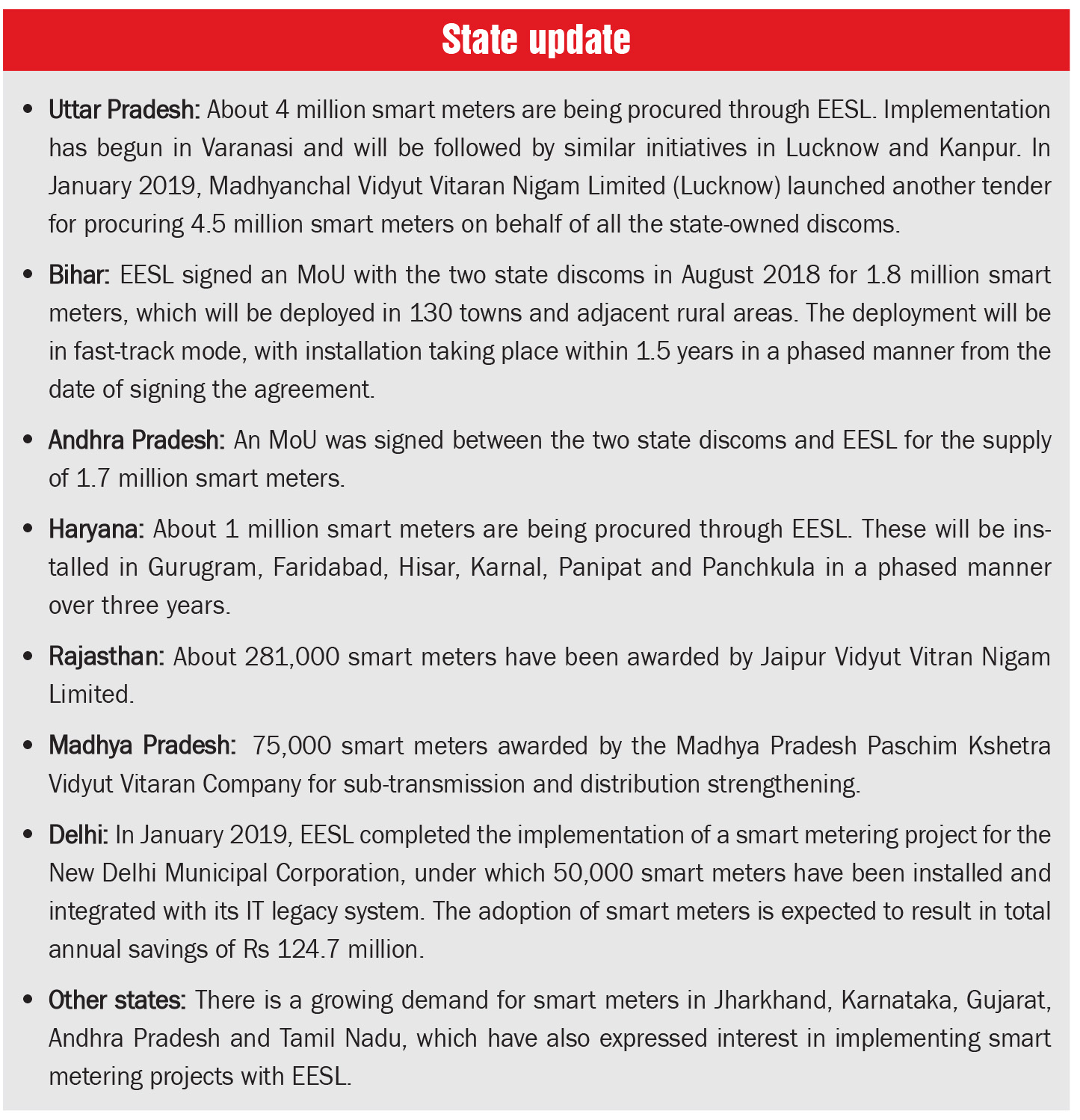 With growing digitalisation of the power system, the need for a robust communication backbone for data and voice transfer has assumed greater significance. A communication system is vital for maintaining grid stability and security. It is also a key component of AMI. It enables two way communication between smart meters and the head-end system (HES) to enable remote reading, monitoring and control of meters (consumer, feeder, distribution transformer, etc). In order to maintain a robust communication network, the CEA and the CERC have notified guidelines and specifications that will help power utilities to frame their communication infrastructure plan/strategy for the upcoming IT and OT applications.

The next few years are expected to see a significant policy push towards smart metering. The proposed amendments to the Electricity Act 2003 mandate the use of smart meters. Recently, the MoP announced an ambitious target to convert all meters to smart prepaid meters over three years starting April 2019. To conclude, smart meter deployment in India is slowly gaining ground though a complete shift to smart meters is still awaited.