Transmission tower designs have evolved significantly over the years. New tower designs such as monopoles and narrow base towers address right-of-way (RoW) issues, minimise the visual impact, enable faster execution and ensure ease of installation. Besides this, there have been advancements in tower foundation designs, survey techniques and installation methods. However, tower failures continue to be a cause for concern. As per a Central Electricity Authority (CEA) report, 52 incidents of tower failures were reported during October 2016 to March 2018.

In order to overcome RoW, time and resource constraints, transmission utilities are adopting multi-circuit towers, narrow base towers and pole structures. Monopoles or sleek towers typically consist of polygonal tubular sections with a tubular cross-arm arrangement for fixing tension. The use of monopoles in the transmission segment is fast gaining traction. This is because they have less land and manpower requirement, and a shorter shutdown period and erection time as compared to traditional towers. They are also more economical and offer better aesthetics.

Delhi Transco Limited (DTL) has installed monopoles in some areas. For the construction of the foot overbridge near the Sarita Vihar metro station, the height of the 220 kV double circuit (D/C) BTPS-Okhla transmission line had to be raised to accommodate the bridge. In this case, Delhi Transco used monopoles at the line. The transco also deployed monopoles at the 220 kV D/C Mundka-Kanjhawla transmission line to accommodate the Mundka-Bahadurgarh corridor. Powergrid is also using symmetrical monopoles at its 320 kV high-voltage direct current (HVDC) Pugalur-Thrissur line.

Another emerging technology solution is narrow base lattice towers. These are being designed and used to minimise the RoW requirement. Like monopoles, these towers can also reduce the corridor requirement. APTRANSCO has developed narrow base towers with a base roughly equal to that of a monopole. The transco has deployed these poles in narrow corridors and on traffic dividers in cities. The transco has developed 132 kV towers with a 1.2 metre base, 220 kV towers with a 2.2 metre base and a 400 kV twin moose with a 7 metre base.

Another technology solution to reduce RoW and land requirements is multi-circuit towers. These are extensively used for LILO of D/C lines in forest areas and at substation entries. Multi-circuit towers are designed to carry three, four or even six circuits. However, multi-circuit towers remain underutilised owing to concerns regarding the failure of the entire circuit in case of a fault in a single connection. 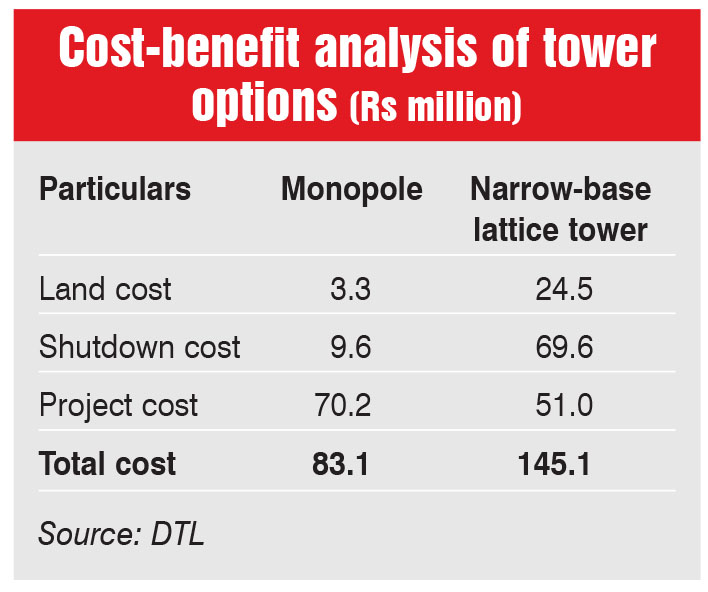 A strong tower foundation is crucial for the stability of towers, particularly during strong winds, hurricanes and other adverse weather conditions. Some of the commonly used tower foundations are precast, grillage, reinforced cement concrete (RCC) spread, pile type and plain cement concrete (PCC). The precast foundation is used when the construction period is limited. The grillage foundation is used in firm soil areas, where concreting is expensive. It is a factory-made design. The RCC foundations can be designed for a variety of soil conditions. The PCC-type foundations consist of a plain concrete footing pad with a reinforced chimney and the stub is anchored to the bottom of the pad through the rods and the chimney.

An emerging tower foundation design is micropiling. Micropile-based tower foundations comprise piles with a diameter smaller than 200 mm. Micropiles can be used in a wide range of geotechnical conditions, making them an ideal option for transmission projects in deserts, mountains and marine environments.

On the tower installation front, the built-up method is the most widely used method for tower installation. In this method, tower members are installed from top to bottom. Of late, helicopters are being used for the erection of towers, particularly in inaccessible mountainous regions. The towers are erected in sections and the bottom section is first lifted and placed on the stub, followed by the upper section, which is bolted to the first section. This method is not widely used in India owing to the prohibitive cost of mobile cranes and poor road connectivity.

With regard to tower survey techniques, LiDAR technology and drones are gaining traction. LiDAR is used for carrying out aerial surveys to optimise route corridors for transmission lines and determine the position of towers through topographic mapping with the help of an aircraft. The data collected through a LiDAR survey can be directly linked to modelling software. Drones are also being used by transmission utilities to assess the potential site locations, design site layouts, generate 3D visualisations and make RoW estimations. Powergrid is deploying helicopters equipped with LiDAR and thermovision cameras for aerial patrolling, and operations and maintenance of transmission lines and towers. 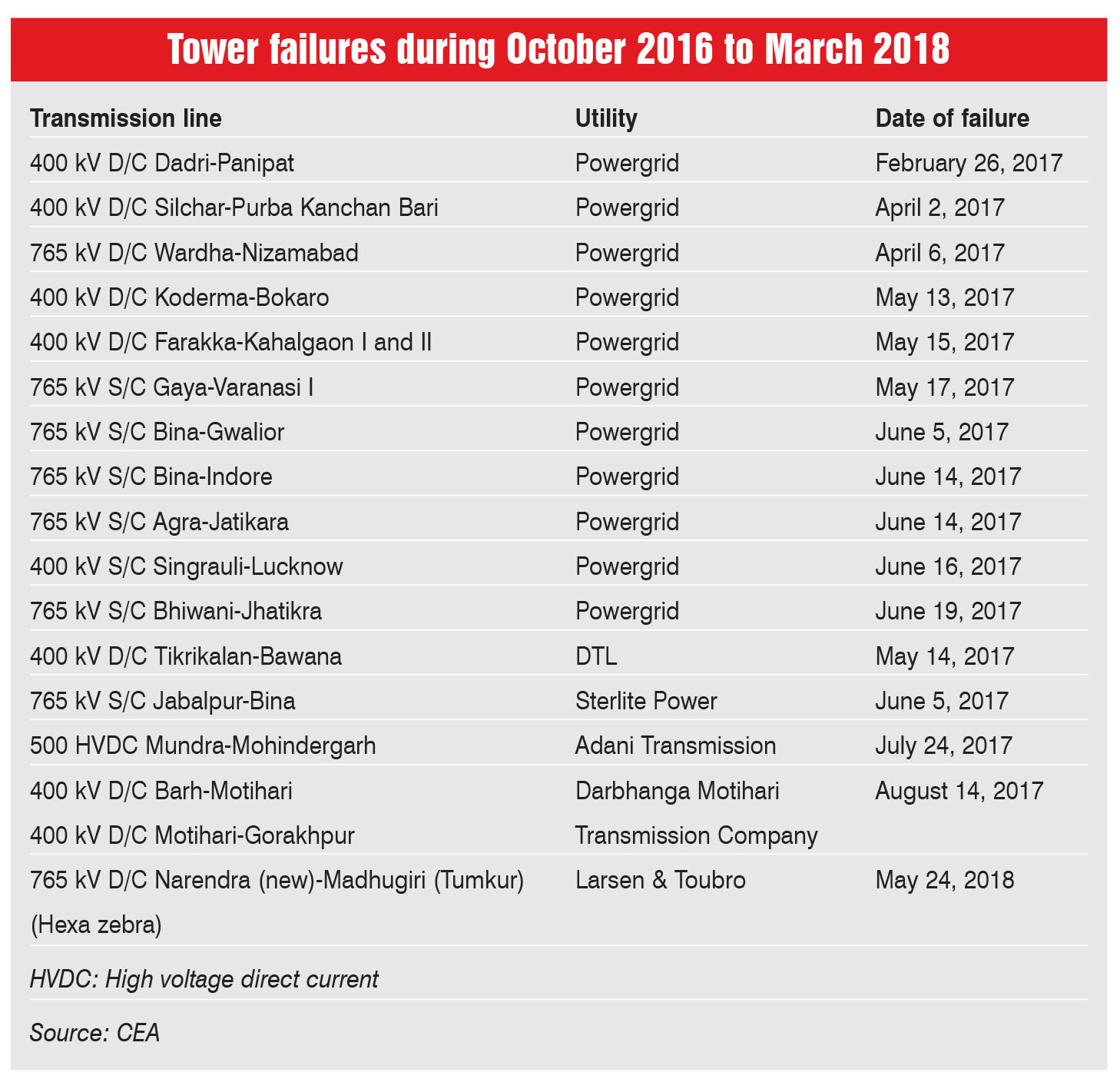 The standing committee noted that high wind velocity during storms, cyclones and whirlwinds is the most common cause of failure. Besides this, tower design deficiency, such as missing cover plates, missing bolts in joints, unplugged holes, and a hanging erection trolley (used for stringing) could lead to tower failure. The other reasons of tower failure include change in the course of river, fire underneath the tower, and rusting of tower legs and stubs.

Over the years, competition in the transmission line and tower market has increased significantly. Therefore, to secure tenders, contractors often quote equipment prices with a very low margin. Besides, the utilities are increasingly decreasing project timelines. A 36-month project is being executed in 24 months. Further, there is a lack of test beds for tower testing purposes. This increases the project completion time since an untested tower is not accepted by consumers.

Net, net, the demand for transmission towers will continue to increase to ensure reliable power supply. To cater to this demand, new and robust technologies need to be deployed to drive the expansion of the transmission network in the country.