Coal continues to be the mainstay of India’s power generation, accounting for nearly three-fourths of the total power mix in 2018-19. Almost 90 per cent of coal-based capacity in India uses indigenous coal, which has very high ash content of 30-45 per cent. The huge quantum of ash generated during power production not only requires large areas of land for disposal, but it is also one of the major sources of air and water pollution. In 2017-18, about 196 million tonnes (mt) of fly ash was generated by 167 thermal power plants (TPPs) as per the Central Electricity Authority (CEA). Of this, around 67 per cent was reported to be utilised, as against the utilisation target of 100 per cent, which was to be achieved by December 2017.

In 2017-18, only 69 TPPs could achieve the fly ash utilisation target as per the norms of the Ministry of Environment, Forest and Climate Change (MoEFCC). In a recent initiative to ensure complete fly ash utilisation, the National Green Tribunal (NGT), through an order dated November 20, 2018, imposed penalties of up to Rs 50 million on TPPs that have not fully disposed of the fly ash generated from operations. A look at the key trends in fly ash generation and utilisation…

The MoEFCC issued the first directive for promoting fly ash utilisation in the country in September 1999, which has been amended from time to time. In the most recent amendment, notified in January 2016, the ministry mandated 100 per cent fly ash utilisation by TPPs by end December 2017. In addition, it was specified that power plant developers will bear the entire cost of ash transportation up to a radius of 100 km. For distances of more than 100 km and up to 300 km, the developer will share the cost of ash transportation equally with the user/construction agency. Further, it directed TPPs to set up or assist in setting up manufacturing facilities for ash-based products on their premises so as to reduce the transportation of fly ash. The notification also made the use of fly ash-based products for all government schemes such as the Pradhan Mantri Gram Sadak Yojana,  Mahatma Gandhi National Rural Employment Guarantee Scheme and Swachh Bharat Abhiyan. It advised the Ministry of Agriculture and Farmers’ Welfare to consider using fly ash as a soil conditioner.

In February 2018, the Ministry of Power launched a web-based application called Ash Track aimed at enabling better ash management by providing an interface between fly ash producers (TPPs) and potential ash users such as road contractors and cement plants. The app gives information about fly ash producers and prospective users in each area as well as on ash availability. It allows users to apply online for fly ash procurement.

Despite various efforts and mandates by the government, the majority of the TPPs have not been able to comply with the 100 per cent fly ash disposal target. The states sought time extension of two to five years to meet the 100 per cent utilisation target. However, their request was rejected by the NGT as any extension in time would have conflicted with the mandate under the Environment (Protection) Act, 1986, particularly when such an extension could harm the environment. The tribunal further imposed penalties ranging from Rs 10 million to Rs 50 million (depending on capacity) on the TPPs as the cost of damage to the environment. 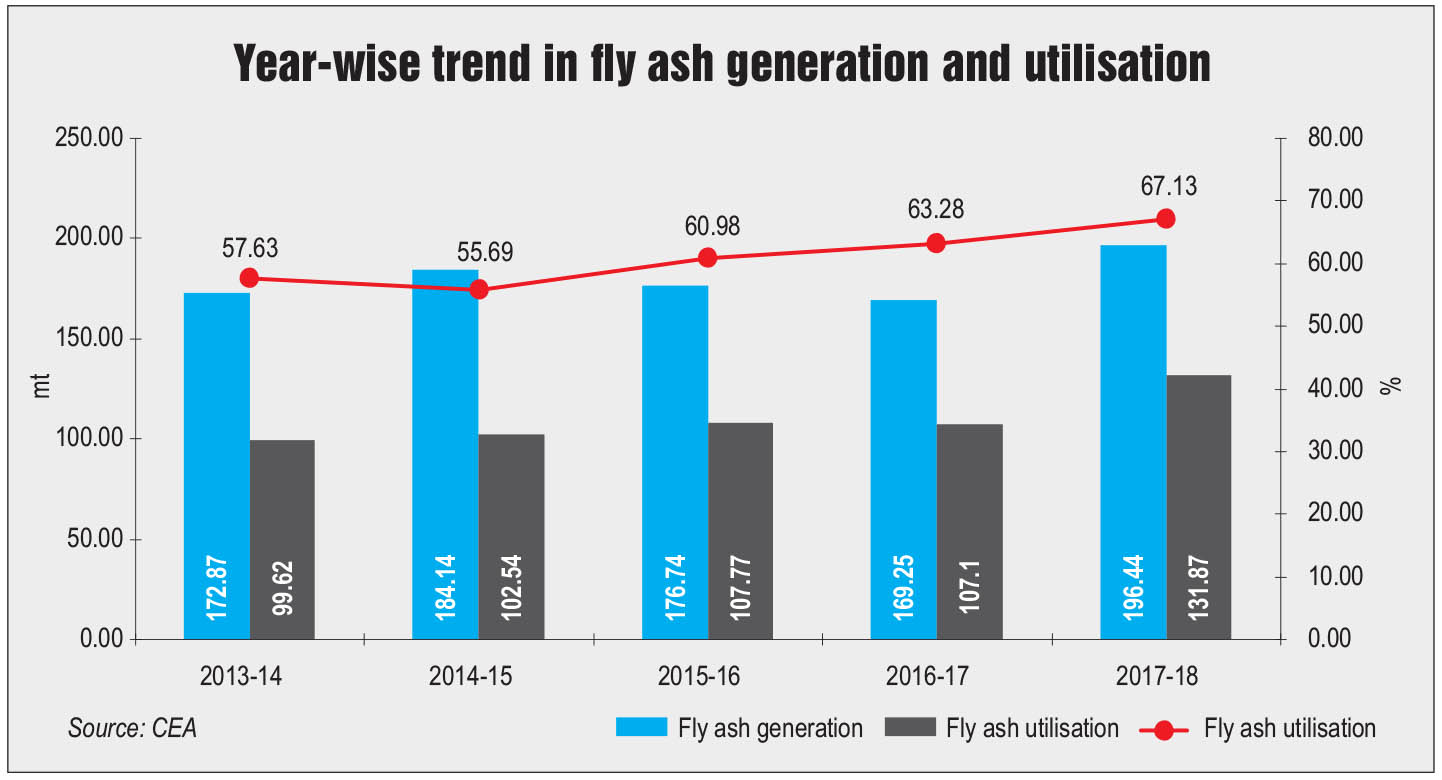 Fly ash utilisation improved by around 4 percentage points in 2017-18 over 2016-17, when around 107 mt of the total 169 mt fly ash was utilised. In 2017-18, fly ash generation across 167 TPPs (aggregating 177 GW of capacity) stood at 196.44 mt, of which around 131.87 mt was utilised. Of the 167 TPPs, 60 TPPs recorded 100 per cent or more fly ash utilisation; 23 TPPs recorded fly ash utilisation of 90-100 per cent; 28 recorded 70-90 per cent utilisation; 16 recorded 50-70 per cent; and 35 recorded less than 50 per cent. Meanwhile, five TPPs did not generate any ash during the year These are the Gupta Energy Private Limited TPP and Mihan TPP of Abhijeet MADC Nagpur Energy Private Limited in Maharashtra, the Rajghat TPP of Indraprastha Power Generation Company Limited in Delhi, CESC’s Titagarh TPP in West Bengal, and the Patratu TPP of Patratu Vidyut Utpadan Nigam Limited in Chhattisgarh.

Utility-wise, of the 87 utilities for which the CEA received data, 31 utilities achieved a fly ash utilisation level of 100 per cent or more. These included the state gencos of Haryana, Punjab, Rajasthan and West Bengal, as well as CESC Limited, Torrent Power, NLC India Limited and Maithon Power Limited (a joint venture of Tata Power and the Damodar Valley Corporation). Another 15 power utilities achieved fly ash utilisation in the range of 90-100 per cent.

Meanwhile, the ash utilisation level of the country’s largest generator, NTPC Limited, stood at 53 per cent. The utility is taking a number of initiatives to utilise the fly ash generated at its power plants. It has signed an agreement with the National Highways Authority of India for the supply of ash from its Unchahar, Tanda, Simhadri, Talcher-Kaniha and Farakka units. It is also running a trial for bulk transportation of fly ash to cement plants in the north-eastern states through inland waterways at Kahalgaon (West Bengal). NTPC is also in discussions for mine reclamation in Korba and Vindhyachal. It is developing ash parks at Varanasi, Raipur, Pune and Cuttack. Further, the company has developed rail loading facilities for fly ash at the Ramagundam, Rihand and Kahalgaon (thermal) units and is in the process of developing similar facilities at Vindhyachal, Sipat, Mouda and Simhadri. 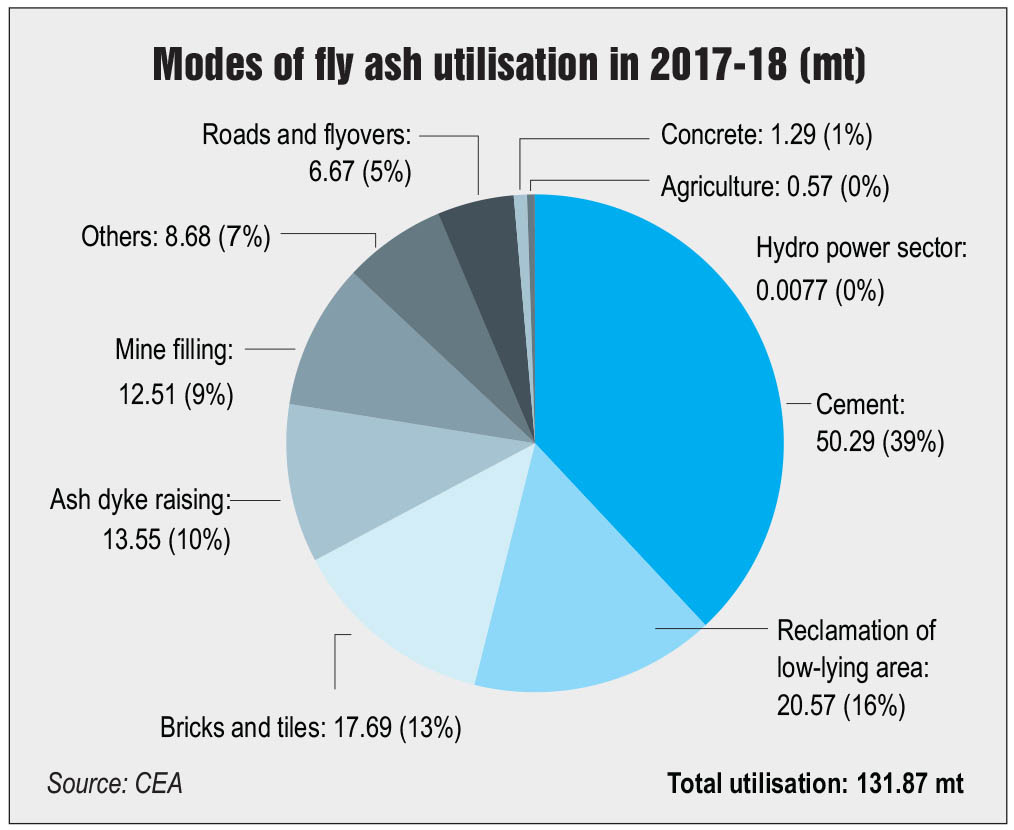 With a 38 per cent share in total utilisation, the cement industry is the biggest consumer of fly ash in India. Blending fly ash in cement is environmentally sustainable and financially attractive since it reduces the requirement of coal and limestone in cement manufacturing. Around 15 per cent of fly ash was utilised as a substitute for soil/sand to reclame low-lying areas, thereby saving the fertile topsoil. Besides these, fly ash is used in the manufacturing of bricks and concrete (13.4 per cent share in 2017-18), which binds the ash and prevents it from escaping into the environment. Fly ash-based bricks and tiles are as good as clay-based conventional bricks. Another use of fly ash is in building roads and embankments since fly ash is lightweight, compressible and amenable. In the agricultural sector, being rich in micronutrients, fly ash helps in the early maturity of crops, improves soil aeration, and conserves plant nutrients and water without affecting the quality of groundwater.

Fly ash utilisation has improved from around 10 per cent in 1997-98 to over 67 per cent in 2017-18. This can be largely attributed to the several regulatory and policy initiatives taken by the government. These include setting fly ash utilisation targets, promoting its use in construction and agricultural activities, and mandating its use in government schemes. However, the millions of tonnes of unutilised fly ash dumped at power plants across the country is a matter of great concern. Given that coal-based generation will continue to account for a major share in the energy mix in the near to medium term and the environmental hazards posed by fly ash, there is a need for a more proactive approach for fly ash utilisation.

The most practical form of fly ash utilisation is in the development of infrastructure on the plant premises. This could include buildings and roads, and ash dykes. This reduces the need to transport the ash, and thereby minimises the impact on the environment. Besides, TPPs can adopt technologies to produce ash in dry form so that it is readily usable by manufacturers of fly ash-based products. In addition, there is a need to explore ways to increase the use of fly ash in other sectors including railways and agriculture. Stricter enforcement of the norms and targets by the government will be key in driving fly ash utilisation among TPPs.