The industrial sector accounts for 30-34 per cent of the total energy consumption in India, of which about 70 per cent is electrical energy consumption. Electric motors are known as the “workhorses” of industry. They are used in driving a broad range of industrial applications such as pumps, compressors, fans or blowers, conveyors and other machines. Motors and motor-driven systems are estimated to account for 43-46 per cent of all global electricity consumption. If the entire world were to adopt a least life cycle approach to motor systems, the energy efficiency savings would be 3,890 billion kWh per annum by 2030, nearly 30 per cent of the total, as per the International Copper Association  India (ICAI).

The industrial sector in India has historically used IE1 motors, which have an inferior standard of efficiency. Moreover, these motors have been in use for many years, and thus experience downtime and undergo repairs more frequently. This further reduces their efficiency. These substandard motors consume more energy and entail a high energy cost. Therefore, improvement in motor efficiency must be a part of any comprehensive energy conservation effort.

The National Motor Replacement Program, designed and implemented by Energy Efficiency Services Limited (EESL), is aimed at creating an enabling environment for the supply of high efficiency motors (HEMs) adhering to the minimum IE3 standard through awareness, capacity building of manufacturers, and development of success cases. It is estimated that more than 10 million motors, with sizes ranging from 1.1 kW, to 22 kW, as were planned to be replaced under the programme, which aimed to replace 120,000 motors with HEMs in the first phase. The programme highlighted the following issues:

EESL has been promoting the replacement of inefficient motors with IE3 motors in the Indian industry through its innovative financing model. To this end, it has signed MoUs with various industry associations, including ICAI, as copper is an integral material used to make motors.

The Indian electric motors market is being driven by the increasing awareness regarding energy conservation, growing acceptance of electric vehicles (EVs), and improving industrial infrastructure in the country. The growing adoption of EVs is likely to drive the demand for electric motors over the coming years. This segment is anticipated to display the highest growth during 2017-23.

The expanding heating, ventilation and air-conditioning (HVAC) industry, rapid urbanisation, and stringent power consumption regulations has given a further push to the market. According to 6Wresearch, the Indian electric motors market size is projected to grow at a compound annual growth rate (CAGR) over 6 per cent during 2017-23.

According to TechSci Research, the domestic motors industry grew by 14.9 per cent during the period April 2018-March 2019. In terms of the domestic market size, the motors (and alternating current generators) industry was worth Rs 74.6 billion in 2018-19. The market for hermetic motors recorded the fastest CAGR of around 9.2 per cent owing to their high efficiency and demand. Overall, the India electric motors market is projected to surpass $2.25 billion by 2023.

The growing government focus on energy efficient motors and the increasing number of industries and construction activities in the country will drive this anticipated growth in the market. Moreover, the population growth in Tier II and Tier III cities, increasing urbanisation and government initiatives such as Make in India, the Smart Cities Mission, Affordable Housing and the Atal Mission for Rejuvenation and Urban Transformation are expected to positively influence the electric motors market in India during the forecast period.

Currently, over 2 million motors are produced in India each year. They together have an energy saving potential of more than 5 billion kWh, if replaced with IE3 motors. Considering the investment for a 600 MW power plant, these energy efficient motors have the potential to save nearly Rs 35 billion for the country.

For an electric motor, efficiency is the ratio of the mechanical power delivered by the motor (output) and the electrical power supplied to the motor (input). Thus, an 85 per cent efficient motor converts 85 per cent of the electrical energy input into mechanical energy. The remaining 15 per cent is dissipated as heat. HEMs employ improved motor design and high quality materials to reduce motor losses. The improved design also reduces heat dissipation and the noise output. Energy efficient motors are more likely to withstand voltage variations and harmonics than standard motors, and have a slightly higher power factor on an average than their standard counterparts.

EESL conducted a motor replacement pilot project in a Surat textile cluster, and found that replacing only 10 inefficient industrial standard motors with energy efficient IE3 motors could lead to annual cost savings of Rs 800,000 and energy savings of over 110,000 kWh at an investment of Rs 426,500 only.

As per the Indian Electrical and Electronics Manufacturers’ Association (IEEMA), over 92 per cent of motors sold in India in 2015-16 were below the current minimum IE2 grade. The country’s motor exports stood at Rs 18 billion during April 2018-March 2019, an increase of 11 per cent over the corresponding period in the previous year. During the same period, India’s motor imports stood at around Rs 32 billion, an increase of about 30 per cent over the previous year.

The IE1 motors have a market share of over 54 per cent (April 2018-March 2019) owing to their standard efficiency of 78 per cent. The share of IE2 motors grew at a rate of around 60 per cent during this period due to their high efficiency of 83 per cent. The maximum market share of around 27 per cent among medium voltage motors is held by 100-1,500 kW motors. Thus, retrofitting every motor across the country will provide estimated electricity savings of 174 MUs and help reduce carbon emissions by 150,000 tonnes, as per Saurabh Kumar, managing director, EESL.

Many countries have issued directives to withdraw lower efficiency class motors and adopt higher efficiency class motors as per IEC 60034-30-1: 2014, thus setting minimum efficiency performance standards (MEPS). Such regulations are expected to impose the technical standards on all motor imports as well. Thus, there is a need to align the Indian standards with the international standards to overcome the trade barriers for exports, and keep a check on the import of inefficient motors into the country.

In 1989, IS 12615 was published, with further revisions implemented in 2004, 2011 and 2018, in accordance with global standards and best practices. In a positive development, in October 2017, the Department of Industrial Policy and Promotion (DIPP) ordered all imported and domestic motors to conform to a minimum standard of IE2. As a result, industries switched to premium efficiency motors. In addition, EESL laid out a premium efficiency motor adoption roadmap. It has adopted its market-tested approach of demand aggregation and bulk procurement followed earlier for LED lighting, super-efficient  Air Conditioners, EVs and smart meters.

In 2017, EESL initiated the bulk procurement of IE3 motors, resulting in a significant reduction of 35 per cent in their procurement price. In addition, it provides simple repayment solutions to consumers. The programme has given an impetus to India’s domestic motor manufacturing. There has been an increase in the import of AC motors, HV cables, conductors and transformers from Germany, China, Japan, the UK, etc.

This programme supports the Standards and Labelling Programme of the Bureau of Energy Efficiency from the manufacturing side and the Perform, Achieve, Trade programme from the end-user side. This will help position India as a technologically advanced player in the global industry. 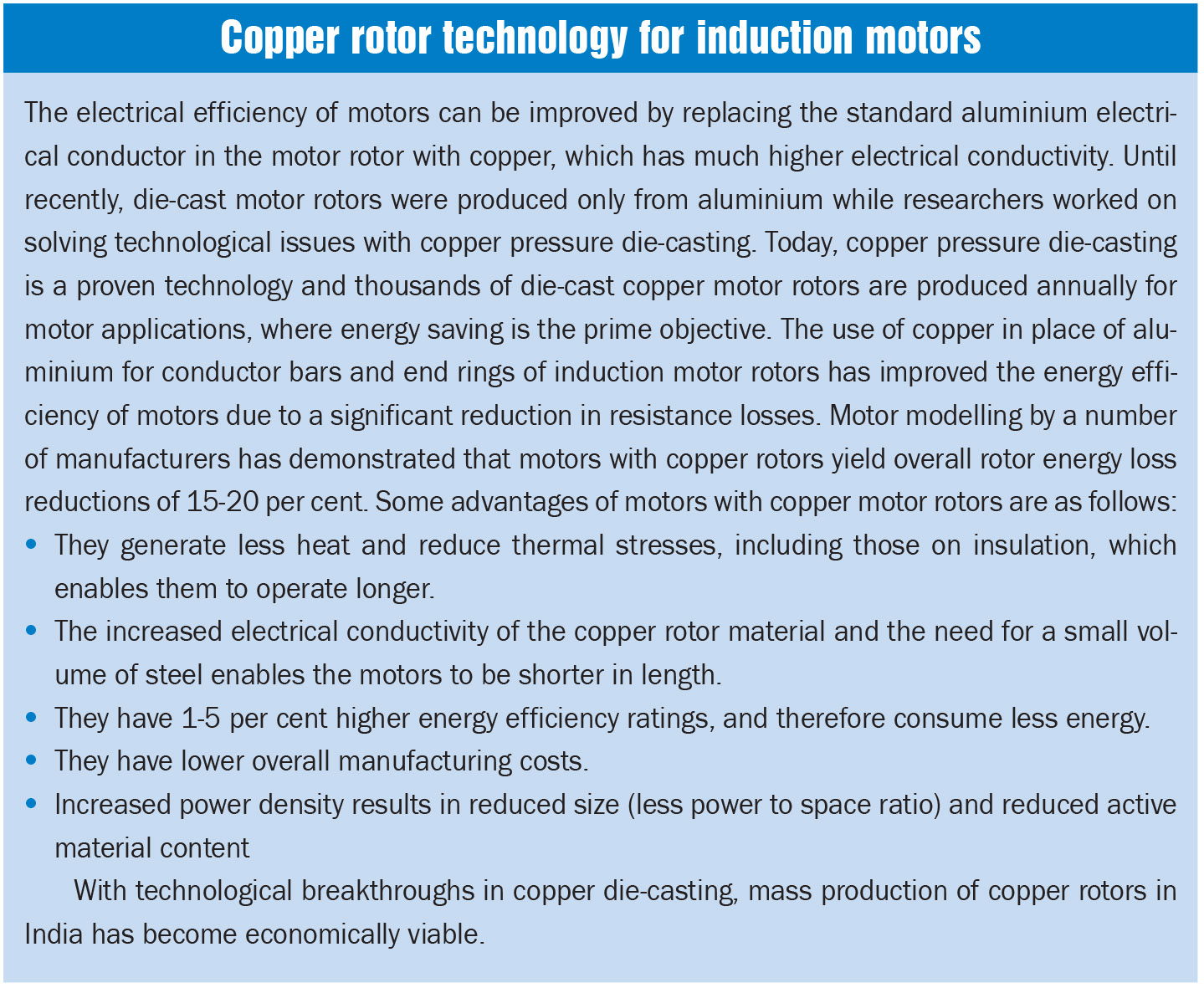 For the certification of motors, the Bureau of Indian Standards (BIS) grants a licence based on the successful assessment of the manufacturing infrastructure, production process, quality control, and testing capabilities of a manufacturer. The conformity of the product to the relevant standards is also established through third-party laboratory testing on the manufacturing premises or a combination of both.

Globally, 41 countries representing 76 per cent of the total energy consumption by motor systems have been transitioning to HEMs and motor systems through a combination of regulatory measures and supporting policies. The majority of these countries already adopted IE2 long back and a few have progressed to make IE3 as their MEPS. In India, the IS 12615 mandatory certification has raised the bar for efficiency of motors.

According to Abhishek Dhupar, manager, Motor and Motor Driven Systems, ICAI, at CII EEETech, “It is important to improve the efficiency standard of industrial motors, specifically low-tension motors, which form a major chunk of the motor family. The most obvious method is by reducing the losses by upgrading to a better and more efficient design. Here, the improvements in efficiency levels apply, namely, IE1, IE2, IE3 and IE4. Upgrading the existing Indian standards for motors in line with  global standards and best practices can help in improving energy efficiency. In this regard, ICAI is closely working with the BIS and IEEMA technical committees. Also, energy efficiency improvements are often simply a matter of sensible purchasing decisions – buying the unit with the lowest lifetime cost rather than the one with the lowest purchase price.”

In India, the IS 12615 certification was made mandatory on October 1, 2017. Since then, the majority of manufacturers have stopped manufacturing IE1 motors and now the minimum available efficiency class is IE2. However, the switchover has not been completely achieved. Apart from this, awareness needs to be created regarding applicable motor standards and the adoption of HEMs by end users. Also, support needs to be extended to the micro, small and medium enterprise (MSME) manufacturing sector to help them to supply HEMs in the market.

As with all new initiatives, challenges remain. Industries have been slow in replacing existing motors with premium efficiency IE3 motors due to several challenges posed by buyers, consultants, operations and maintenance staff, and also suppliers. Efforts are needed to educate buyers on the energy and cost savings, payback period of investment, and high reliability and low maintenance offered by IE3 motors.

Other barriers existing at different stages are the high initial purchase price of IE3 motors; the need for development of package solutions for existing industrial users to facilitate switching over to IE3 motors; the unavailability of adequate testing facilities to meet the testing requirements; lack of R&D manpower; high investment required in design and testing infrastructure; and rewinding of old inefficient motors multiple times rather than replacing them with HEMs.

The total implementation of the DIPP order is still under question, as imports have not reduced significantly. It is quite possible that these motors are being imported under some other codes, which can easily bypass customs duty. Hence, there is a need to strengthen the compliance part. In India, the supply of IE3 motors has not been very smooth due to low demand and the high investment required in the test facilities and design. In addition, skilled manpower is required, which the MSME sector cannot afford. The rising capital and labour costs make efficiency a low priority. This barrier can be overcome by making premium efficiency motors more affordable. This price correction requires innovative financing solutions and easier loans. For example, the energy services company model of repayment by monetising deemed savings is an innovative financing method, which relieves consumers of the financial burden of upgrading their motors. Instead of an upfront investment, consumers only pay the service provider through the energy savings over a mutually agreed period of time.

HEMs will become the “new normal” in the future, creating more demand. A supporting financing mechanism can meet this demand. Over time, the large-scale industrial adoption of these new motors can lead to an overall market transformation.