Companies in the capital goods space are facing challenging times with sluggishness in new investments in several sectors as well as rising non-performing assets in the banking sector. The  Rs 61.23 billion Thermax Group, a long-standing player in the equipment market providing technologies and solutions in energy and environment, has been successful in tiding through rough times fairly well. While its overall order book performance has been weak (a 12 per cent decline in 2018-19 from the previous year) due to tough market conditions, it reported a strong 33 per cent increase in its top-line performance in 2018-19 (after several years of decline) and a 41 per cent increase in net profits. The company is progressively strengthening its footprint and has recently started operations of a new manufacturing facility in Andhra Pradesh. Besides, the company has also become increasingly active in the emission control market and recently won a significant Rs 4.7 billion flue gas desulphurisation (FGD) order.

The Pune-headquartered Thermax Group consists of seven wholly owned domestic subsidiaries, 21 wholly owned overseas subsidiaries and a joint venture (JV), offering integrated solutions in the areas of heating, cooling, power, water and waste management, air pollution control and chemicals. Thermax’s power generation division, a leading engineering, procurement and construction (EPC) solutions provider, has extensive experience in building and commissioning turnkey captive power plants as well as independent power plants, and has over a hundred power and cogeneration projects contracted in several countries. Thermax also has its presence in the renewables space, and harnesses solar energy to support heating, cooling and power generation requirements. Thermax operates in three segments – energy, environment and chemicals, spanning a wide range of products and services. These products and services can be grouped into three domains: products (both standard and custom-designed), projects and EPC contracts (mostly for non-standard products), and life cycle and operations and maintenance (O&M) services.

An important milestone for Thermax in 2018-19 has been the acquisition of a stake in its JV partner Babcock & Wilcox. The Thermax Group holds a 51 per cent  stake in its JV Babcock & Wilcox Energy Solutions Private Limited, which was set up in 2010. Also,  it holds a 49 per cent stake in Babcock & Wilcox Power Generation Group, USA, which is capable of manufacturing supercritical boilers (as well as subcritical boilers and air pollution control nitrous oxide equipment) with an annual capacity of 3,000 MW. The facility, which is located at Satara, Maharashtra, will be taken over by Thermax. The acquisition is synergistic for the company as Thermax’s boilers and heaters division, has been manufacturing boilers in the subcritical range for cogeneration and captive power from the 1980s onwards.

During 2018-19, Thermax concluded the purchase of 49 per cent equity of the SPX Corporation from a private equity firm in Germany and SPX is now a 100 per cent subsidiary. SPX would continue to supply air cool condensers and work in parallel with the process cooling business of Thermax to introduce new technologies in the market. Previously, TSPX was a JV with Thermax (51 per cent), MUTARES HOLDING 24-AG Germany (23 per cent) and BALCKE-DUERR GmbH Germany (26 per cent) as shareholders. At present, the company has 15 manufacturing facilities spread across India, China, Germany, Denmark, Indonesia and Poland. Recently, in February 2019, Thermax inaugurated a new manufacturing facility at Sri City in Andhra Pradesh, its first platinum-rated factory, which will produce a wide range of vapour absorption machines comprising chillers, heat pumps and heaters. Built with an investment of Rs 1.66 billion, it is expected to augment Thermax’s export capabilities, besides meeting the domestic demand. Meanwhile, the company has decided to close down its China business owing to trade difficulties, and products not being widely accepted. It has invested Rs 9.6 billion in China. 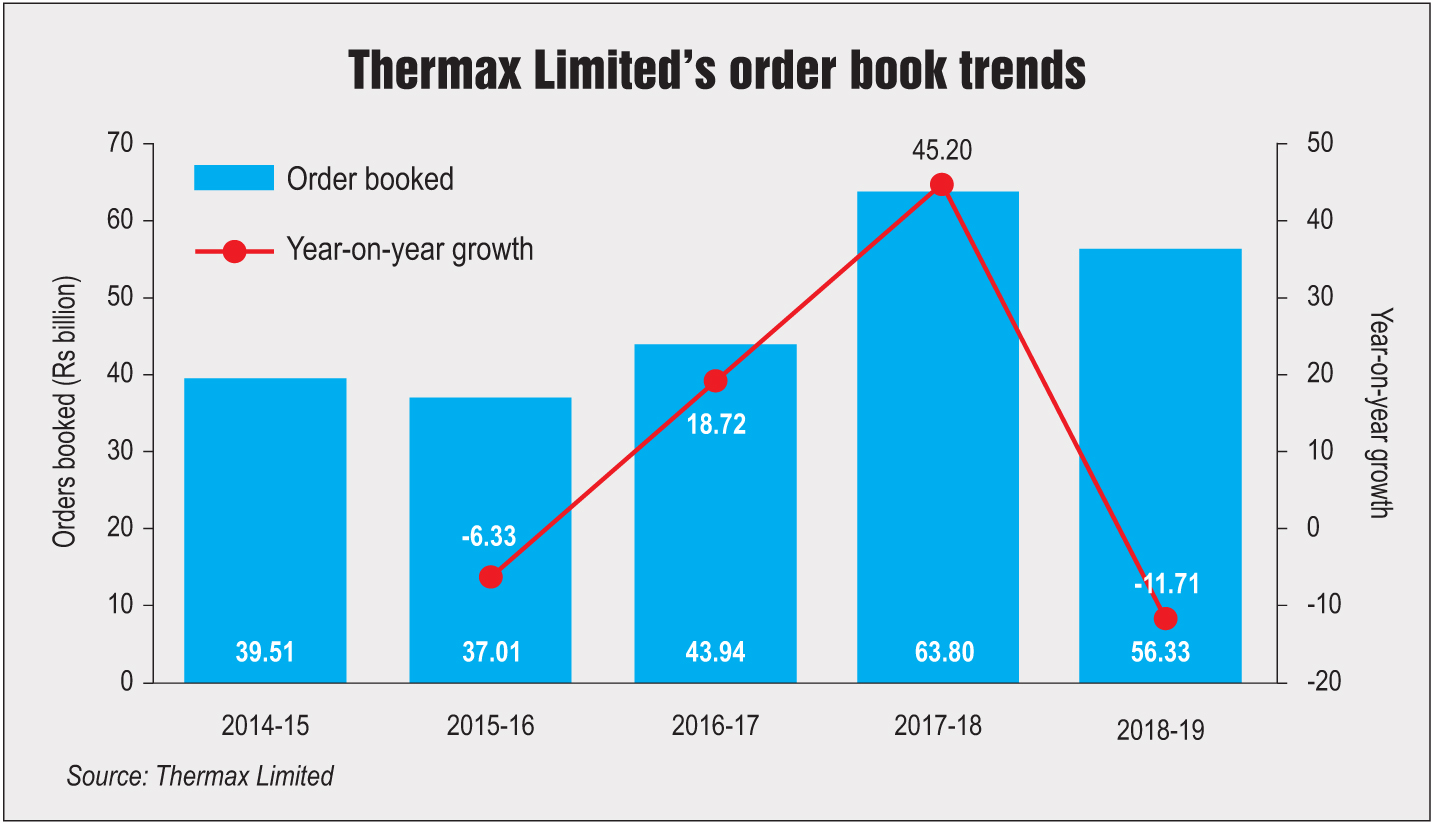 Segment-wise, orders booked by the energy segment were Rs 44.76 billion in 2018-19, compared to Rs 53.09 billion in the previous year. Of this, domestic orders comprised the largest share at Rs 28.06 billion. Major EPC orders received during the year were a repeat order for a gas-based cogeneration plant, solid fuel-based cogeneration projects, waste heat recovery plants and international projects in Southeast Asia and the Middle East. Overall, the order backlog in the energy segment stood at Rs 47.93 billion, of which domestic orders were around Rs 29.72 billion.

Orders booked by the environment segment were Rs 7.41 billion in 2018-19, compared to Rs 7.29 billion in the previous year. Recently, in July 2019, Thermax concluded an order for Rs 4.71 billion from a government-led power company to set up two FGD systems at their thermal power plant in Jharkhand. The scope of supply included the design, engineering, manufacturing, civil work, construction and commissioning of the FGD systems. The project delivery is scheduled for over 30 months. Thermax has been quite active in the FGD segment, given the recent thrust on meeting the revised environment norms by thermal gencos and is expecting more orders from this segment in financial year 2020. “I am happy to say that in one of the tenders, we are at L1, but we are yet to conclude the contract and collect the order,” noted M.S. Unnikrishnan, managing director, Thermax Limited, in a recent earnings conference call for financial year 2019. Interestingly, in the first lot of tenders, Thermax did not bid for FGD orders of power major NTPC Limited because of unfavourable trade terms.

As of June 2019, the group had an order balance of Rs. 52.5 billion compared to Rs 64.2 billion, down 18 per cent. Order booking for the first quarter of 2019-20 was 26 per cent lower at Rs 12.17 billion (compared to Rs 16.52 billion in the same quarter last year) on account of a slowdown in investment sentiment witnessed in both domestic and international markets.

Going ahead, Thermax is targeting at booking of short-cycle orders for 2019-20 as well as international markets for new orders. The company expects enquiries and order intakes in cement (waste heat recovery, captive plants), refinery, emission control equipment for industries and FGD segments, which are expected to provide revenue visibility for the next one year. Further, recovery in international orders as well as smaller orders in chiller absorptions and mid-size-ticket orders in the cement and FGD segments are expected to help the company’s order book as well. Some of the other focus areas of the company are tightening costs and cash flow management. It is also concentrating on innovation. In fact, Thermax has initiated an all-encompassing digitalisation programme to transform its processes and operating systems to a digital platform. As a part of this programme, Thermax’s product, project and service offerings will transition into an IoT-based platform, and incorporate artificial intelligence-based manufacturing. Meanwhile, the company’s Research, Technology and Innovation Centre has been selected by the Department of Science and Technology for the development of methanol from coal technology, in partnership with IIT-Delhi. The methanol generated from the high ash content coal would then be used as input to create hydrogen as a fuel. The commercial development of the technology can help reduce the carbon footprint in the future.

In sum, traction in large order wins and strong execution would help the company to continue delivering a robust financial performance in the next one or two years.