One of the recent notable achievements in the power sector has been near 100 per cent household electrification in the country under the Pradhan Mantri Sahaj Bijli Har Ghar Yojana (Saubhagya). All states except Chhattisgarh (with only a few households remaining to be electrified) have been fully electrified under the programme. Apart from this, the government’s Ujwal Discom Assurance Yojana (UDAY) for improving the financial and operational performance of discoms completed its first term in March 2019. While the results of the scheme are still pending, preparations are under way for introducing UDAY 2.0. Other government schemes such as the Deendayal Upadhyaya Gram Jyoti Yojana (DDUGJY) and the Integrated Power Distribution Scheme (IPDS) have contributed significantly to the strengthening and expansion of the sub-transmission network and distribution in the country in the past couple of years.

Under UDAY, 27 states and five union territories (UTs) have signed MoUs with the central government for financial and operational improvements. Under the scheme, the states took over 75 per cent of the debt of their distribution utilities by way of bonds to help ease their debt burden. As of August 19, 2019, UDAY bonds totalling Rs 2.32 trillion have been issued. This is around 86 per cent of the total bonds worth Rs 2.69 trillion envisaged to be issued under the scheme.

Since the launch of UDAY, aggregate technical and commercial (AT&C) losses have been declining consistently. For UDAY states, AT&C losses declined from 20.2 per cent in 2016-17 to 18.7 per cent in 2017-18, and further to 18.2 per cent during 2018-19. This is still higher than the targeted loss level of 15 per cent, which was to be achieved by March 2019. Meanwhile, the gap between the average cost of supply and the average revenue realised decreased from Re 0.41 per unit in 2016-17 to Re 0.17 per unit in 2017-18. Apart from this, discom losses declined by more than 60 per cent, from Rs 378.77 billion in 2016-17 to around Rs 150.5 billion in 2017-18. However, the latest estimates suggest that the losses increased to Rs 283 billion in 2018-19. Meanwhile, with respect to progress on metering targets, 100 per cent feeder metering has been achieved in rural and urban areas while 60 per cent and 84 per cent distribution transformer metering has been achieved in rural and urban areas respectively. On the smart metering front, progress has been rather slow, with 4 per cent smart metering achieved for consumers with per month consumption of over 200 kWh.

Launched in 2014, the IPDS aims to provide quality and reliable 24×7 power supply in urban areas. As of August 2019, a total of Rs 320.58 billion has been sanctioned under the scheme. This includes a government grant of Rs 201 billion, of which Rs 90.81 billion has been released. Of the total sanctioned outlay, Rs 282.6 billion is for system strengthening of the sub-transmission and distribution network in 3,634 towns across 509 circles, Rs 9.85 billion is for IT enablement of discoms, Rs 7.92 billion is for enterprise resource planning, Rs 8.34 billion is for smart metering, and the remaining is for substation monitoring and gas insulated substations. With respect to feeder monitoring, of the 36,172 feeders, around 32,091 (88.7 per cent) are being monitored on the national power portal as of August 2019. For registering consumer complaints, 49 public discoms and 11 private discoms have made the short code “1912” operational.

Under the erstwhile Restructured Accelerated Power Development and Reforms Programme (now subsumed under the IPDS), an amount of Rs 52.97 billion has been sanctioned (Rs 40.22 billion disbursed) across 1,405 towns for IT Part A; Rs 12.51 billion (Rs 5.51 billion disbursed) for supervisory control and data acquisition (SCADA) Part A across 59 towns; and Rs 287.84 billion (Rs 71.72 billion disbursed) across 1,227 towns for Part B. In terms of physical progress, go-live status has been achieved in 1,389 of the total 1,405 towns targeted under the programme. Further, a SCADA system has been deployed in 57 of the 59 towns. System strengthening Part B has been completed in 1,195 towns.

Launched along with the IPDS in December 2014, the DDUGJY targets the electrification of all villages and strengthening of sub-transmission and distribution infrastructure in rural areas. As of December 2018, a total of 5,958 projects worth Rs 1,206 billion have been sanctioned under the scheme (covering projects across various plan periods). Of this, Rs 696.7 billion has been released. On the intensive village electrification front, of the total of 0.78 million villages to be electrified, 0.61 million have achieved 100 per cent electrification (about 78 per cent) while 0.17 million still remain to be unelectrified. 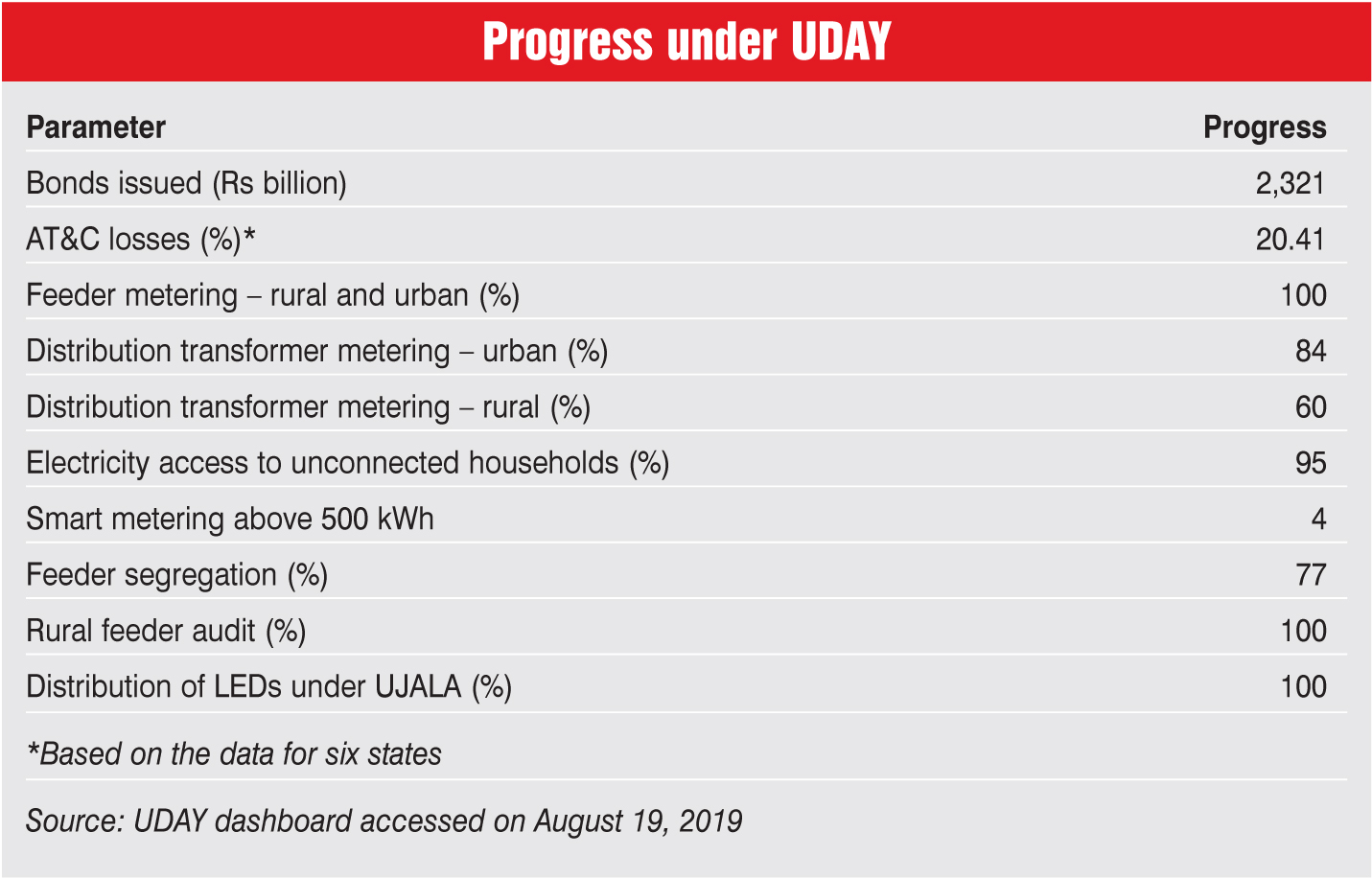 The Ministry of Power (MoP) launched the National Smart Grid Mission(NSGM) in 2015 to plan and monitor the implementation of policies and programmes to develop a smart grid. Currently, five smart grid projects are being implemented in the country under the NSGM. These are in Chandigarh, Jharkhand, Odisha and Kerala. The projects entail the deployment of advanced metering infrastructure, outage management systems, demand response systems, etc. The total cost of these projects is estimated to be around Rs 6.85 billion, which includes support of Rs 2.05 billion from the central government. The first phase of the NSGM ended in March 2017. The second phase was launched in April 2017 for the period up to March 2020. In addition, all 11 pilot projects, which were 50 per cent funded by the MoP, were completed by July 2019.

The National LED Programme was launched in January 2015 by Energy Efficiency Services Limited (EESL) with the aim of promoting the use of efficient lighting technology at affordable rates. The programme has two components – UJALA and the Street Lighting National Programme (SLNP). UJALA aims to provide LED bulbs to domestic consumers with a target of replacing 770 million incandescent bulbs with LED bulbs. Under the SLNP, 13.4 million conventional street lights are planned to be replaced with smart, energy efficient LED street lights by March 2019.

Under UJALA, the total number of LED bulbs distributed across 34 states/union territories stood at about 358.48 million, as of August 19, 2019. The resultant energy savings are estimated at 46 BUs per year and the annual cost savings at around Rs 186 billion. Under the SLNP, 9.9 million conventional street lights have been replaced with LED street lights resulting in energy savings of 6,647 MUs per year.

In sum, significant progress has been made under various government schemes, but a lot still remains to be done. The government has proposed UDAY 2.0 to fill the gaps left by the previous scheme in the areas of loss reduction and smart metering. Further, discoms now have a bigger responsibility of managing an enlarged network and consumer base and controlling AT&C losses, which are expected to rise after the implementation of Saubhagya.