The operational performance of power utilities has improved over the past year. The plant load factors (PLFs) of thermal power plants (TPPs) have recovered marginally owing to increased demand, while the majority of the state transmission utilities have reported a decline in transmission losses. Further, the aggregate technical and commercial (AT&C) losses of discoms have reduced though they are still above the targeted level of 15 per cent in most states.

Of the 34 utilities tracked by Power Line Research in 2018-19, 19 reported an increase in PLF over the previous year. The highest PLFs (at 94.78 per cent) were reported by Sasan Power Limited (SPL), which runs the 3,960 MW Sasan ultra mega power project in Madhya Pradesh, and Odisha Power Generation Corporation Limited (OPGCL), which operates the 420 MW IB Valley TPS in Jharsuguda, at 83.68 per cent PLF.

Among central utilities, NTPC Limited recorded a PLF of 77.18 per cent in 2018-19, marginally lower than that in the previous year. NTPC’s best performing plant was the Vindhyachal super thermal power station (TPS), which recorded a PLF of 90.03 per cent, whereas the lowest PLF was recorded by its Barauni TPS (acquired from BSPGCL) at 2.44 per cent. The Damodar Valley Corporation recorded an increase of 3.86 percentage points in its PLF, from 55.19 per cent in 2017-18 to 59.05 per cent in 2018-19, whereas the PLF of NLC India Limited declined marginally from 70.55 per cent to 70.31 per cent.

At the state level, OPGCL was the best performing utility with 83.86 per cent PLF in 2018-19, which is well above the average state sector PLF and the national av-erage. Telangana State Power Generation Corporation Limited was the second-best performing state utility with 77.54 per cent PLF followed by Chhattisgarh State Power Generation Company, which recorded a PLF of over 73.99 per cent in 2018-19. Overall, the state utilities of Punjab, Rajasthan, Uttar Pradesh, Chhattisgarh, Gujarat, Maharashtra, Madhya Pradesh, Telangana and Tamil Nadu recorded an increase in PLF during 2018-19. Meanwhile, the biggest drop in PLF was reported by Andhra Pradesh Power Generation Company Limited, with the PLF declining by 12.93 percentage points from 71.59 to 58.66 per cent. The state gencos of Karnataka, West Bengal and Haryana, as well as Gujarat Mineral Development Corporation Limited, Singareni Collieries Company Limited and Tenughat Vidyut Nigam Limited also experienced a decline in PLFs during 2018-19 over the previous year. 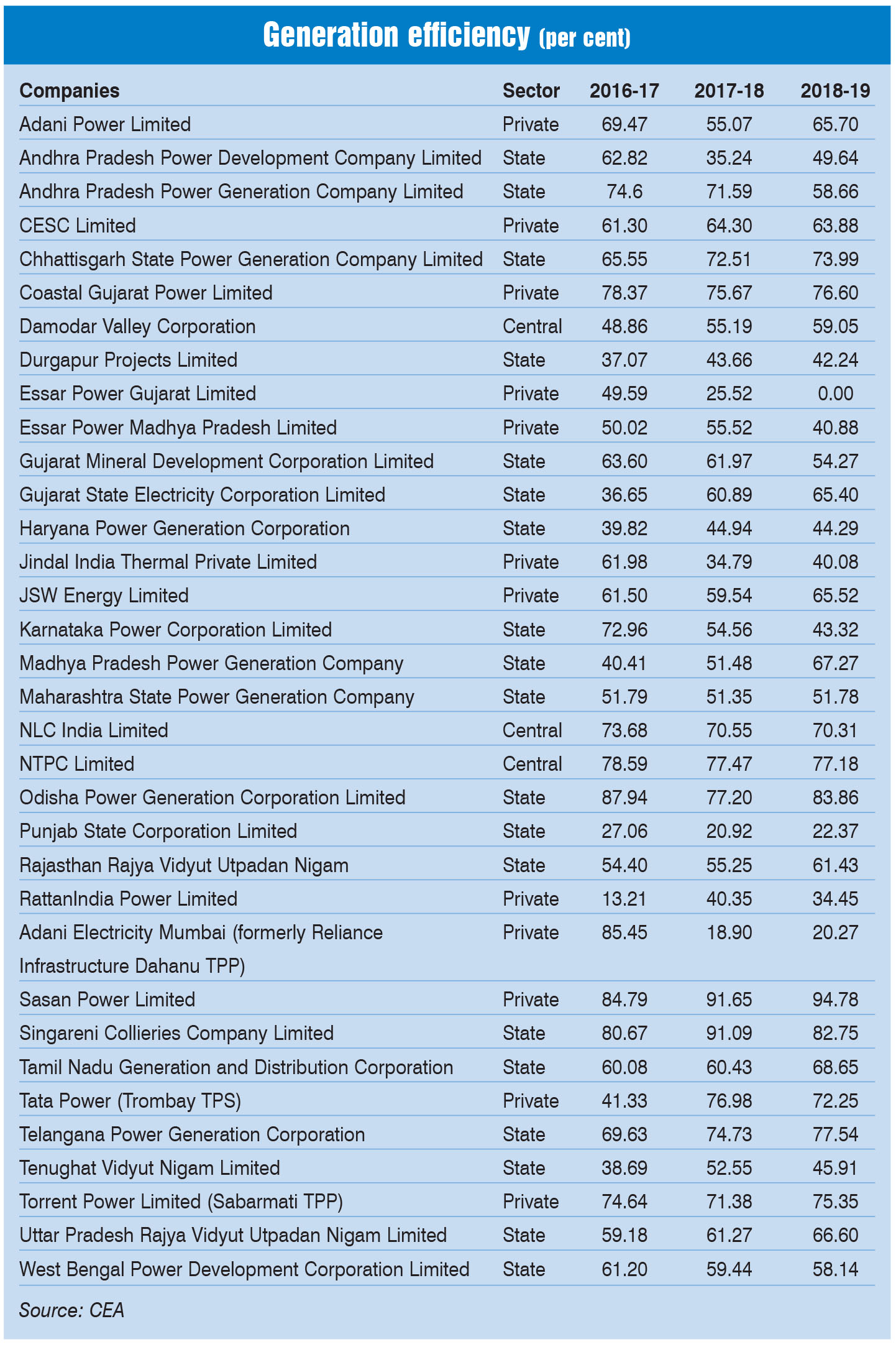 A majority of transcos reported losses in the range of 3-4 per cent including the state utilities of Assam, Bihar, Gujarat, Jammu & Kashmir, Karnataka, Maharashtra, Odisha, Punjab, Rajasthan, Tamil Nadu, Telangana, Uttar Pradesh, Chhattisgarh and West Bengal. The transcos with the highest losses of over 4 per cent were the Meghalaya Power Transmission Corporation, the Bihar State Power Transmission Company and Kerala State Electricity Board Limited (KSEBL). 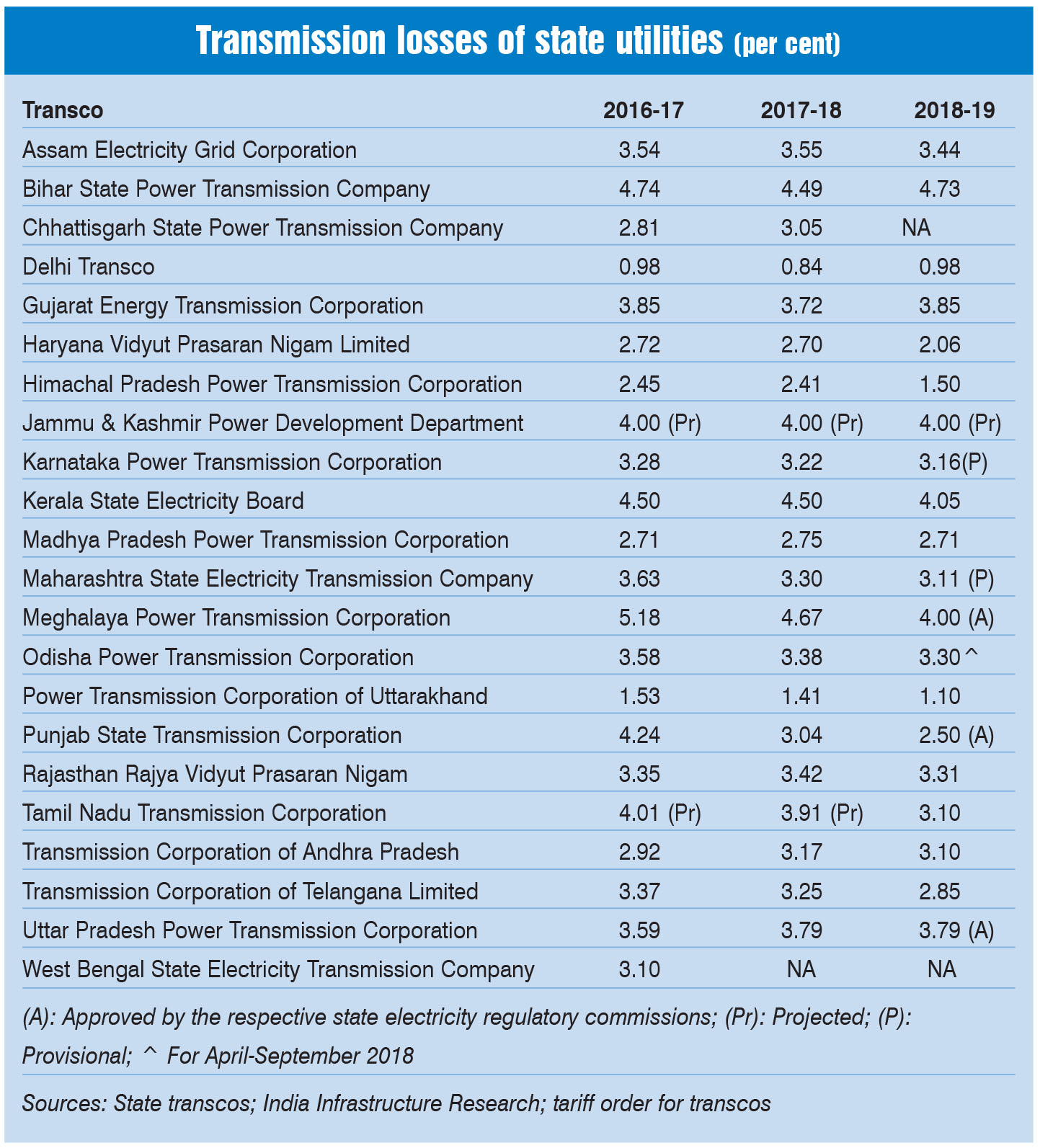 Meanwhile, private sector discoms have consistently reported low losses over the past couple of years. Both Delhi discoms Tata Power Delhi Distribution Limited (TPDDL) and BSES reported good numbers. TPDDL reported an improvement in performance with AT&C losses of 7.92 per cent in 2018-19 vis-à-vis 8.4 per cent in the previous year while BSES Rajdhani Power Limited’s losses increased to 10.64 per cent from 9.44 per cent. BSES Yamuna Power Limited’s AT&C losses stood at 15.39 per cent in the April-November 2018 period. The other private discoms (which reported T&D losses during the review period) also bettered their performance in 2018-19. The T&D losses for India Power (3 per cent), CESC Limited (8 per cent) and Adani Electricity Mumbai (8.28 per cent) were lower than those in 2017-18. Tata Power Mumbai’s T&D loss was the lowest at 1.02 per cent though it increased marginally over the previous year. 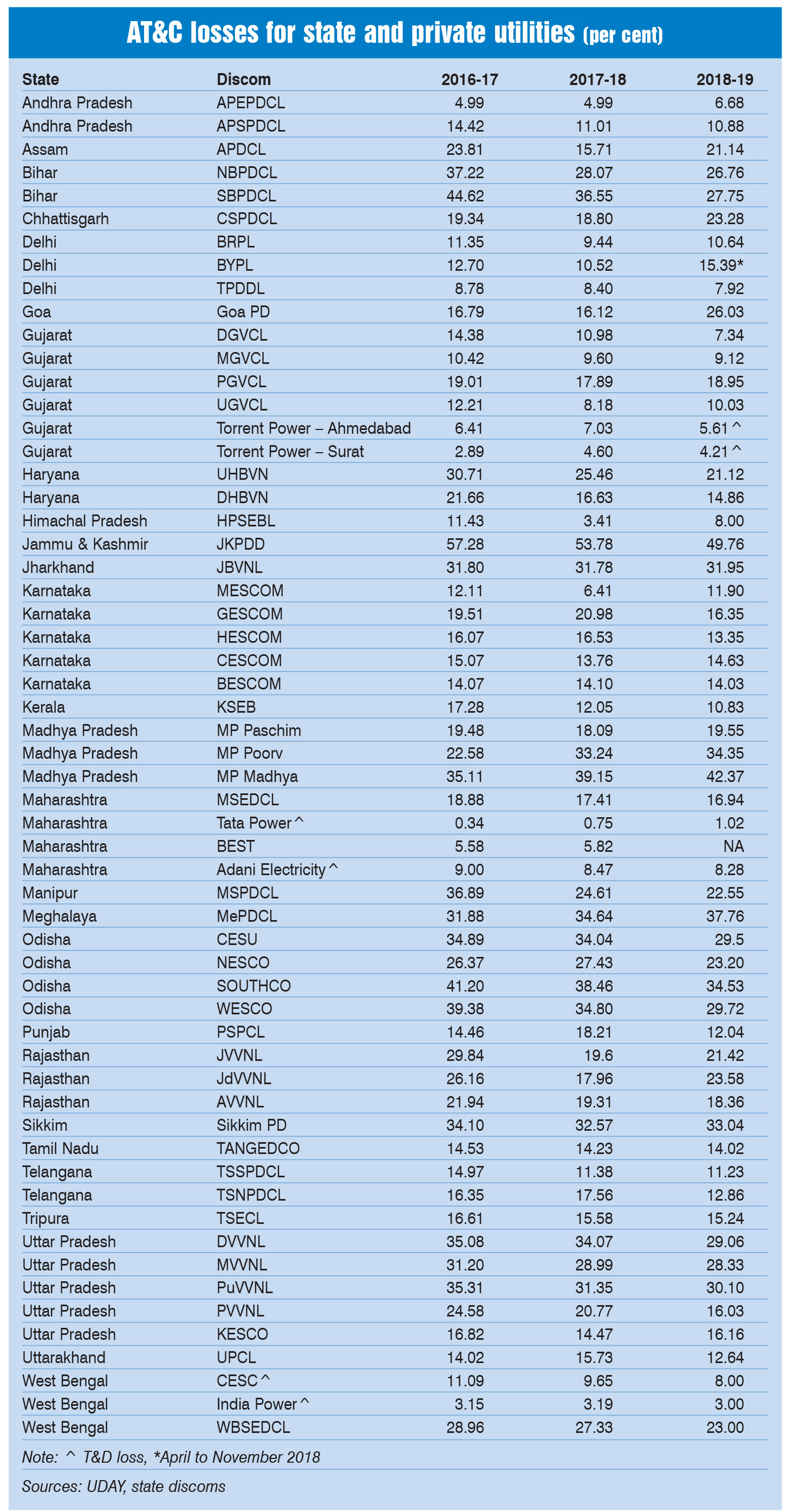 Overall, the power utilities have seen an improvement in their operational performance as a result of the various schemes and programmes undertaken by the central government. However, there is still a lot of ground to cover. The generation segment is weighed down by issues such as low offtake of power by discoms. Further, AT&C losses in some areas are as high as 49 per cent. The implementation of government schemes needs to be closely monitored to attain the desired results as the viability of investments across the sector largely depends on the operational performance of power utilities. The performance-linked financial and operational turnaround plan, UDAY 2.0, expected to be soon launched by the government, could also help improve the health of the beleaguered discoms.