Thermal power stations emit significant amounts of fly ash and ultra-fine particles into the atmosphere. Electrostatic precipitators (ESPs) help remove fly ash and fine particles from flue gas before passing the gas into the chimney. In practice, a high voltage is applied to the discharge electrode, generating a corona discharge that produces minus ions. The electrically charged dust is accumulated on the collecting electrode by an electrical field. The accumulated dust is removed by rapping hammer (dry ESP), scraping brush (dry ESP), or flushing water (wet ESP).

According to the new environment standards issued in 2015, thermal power plants need to meet the prescribed particulate matter (PM) emission standards based on their installation dates – 100 mg per Nm3 for plants commissioned till December 31, 2003, 50 mg per Nm3 for plants commissioned between January 1, 2004 and December 31, 2016, and 30 mg per Nm3 for plants commissioned January 1, 2017 onwards. These standards are based on Indian coal characteristics, meteorological conditions, existing flue gas concentration levels, and the best available control technology. There are two globally acceptable technologies for PM control, ESPs and bag filters using fabric filter, which can offer over 99.8 per cent reduction in PM emissions. The basic criterion for selecting a control system is the desired level of control. The choice of technology depends on the resistivity of the ash, which depends on the fly ash composition and sulphur content of the coal, and operational factors. Commercially proven indigenous ESPs are being used in all coal-based power plants in India.

While these emission standards can be adhered to in respect of new thermal power stations, there is an issue regarding compliance by the already running stations, which do not have adequate control mechanisms installed or where the existing control equipment is inefficient. Thus, to implement the emission norms, extensive consultations were held among the Central Electricity Authority (CEA), power utilities, regional load despatch centres and the Power System Operation Corporation. A detailed phasing proposal outlining the plan of action for the augmentation of ESPs for suspended particulate matter (SPM) control (up to 2024) was prepared by the CEA and sent to the Ministry of Environment, Forest and Climate Change. A detailed report was prepared, keeping in mind the requirement of meeting new norms without affecting the electricity requirement of the country. Accordingly, the same was finalised by the CEA in consultation with the stakeholders and the Ministry of Power. The ESP upgradation plan has been prepared for 65,925 MW (231 units). A total of 71 GW (270 units) capacity was found to be PM non-compliant. Of this, around 63 GW (220 units) capacity has submitted the implementation plan to upgrade ESPs to meet the new PM norms.

The country’s largest power genco, NTPC has taken the lead in ESP augmentation. As a proactive measure, it has already planned/undertaken extensive renovation and modernisation (R&M) of ESPs in units installed before 2003. The company has identified 94 units requiring implementation of R&M. As of now, 53 units out of a total of 15,320 MW capacity have implemented R&M of ESPs, which were commissioned before December 31, 2003. For units commissioned after December 31, 2003, only two units have completed its implementation.

In general, upgradation or augmentation of ESPs requires shutdown of the unit for about four to six months but the actual time taken for R&M of ESPs varies (as shown in Table 1). Typicallly, the cost for PM control is around Rs 2.5 million per MW, which implies that the total ESP upgradation capacity will require a capital expenditure of over Rs 163.5 billion. 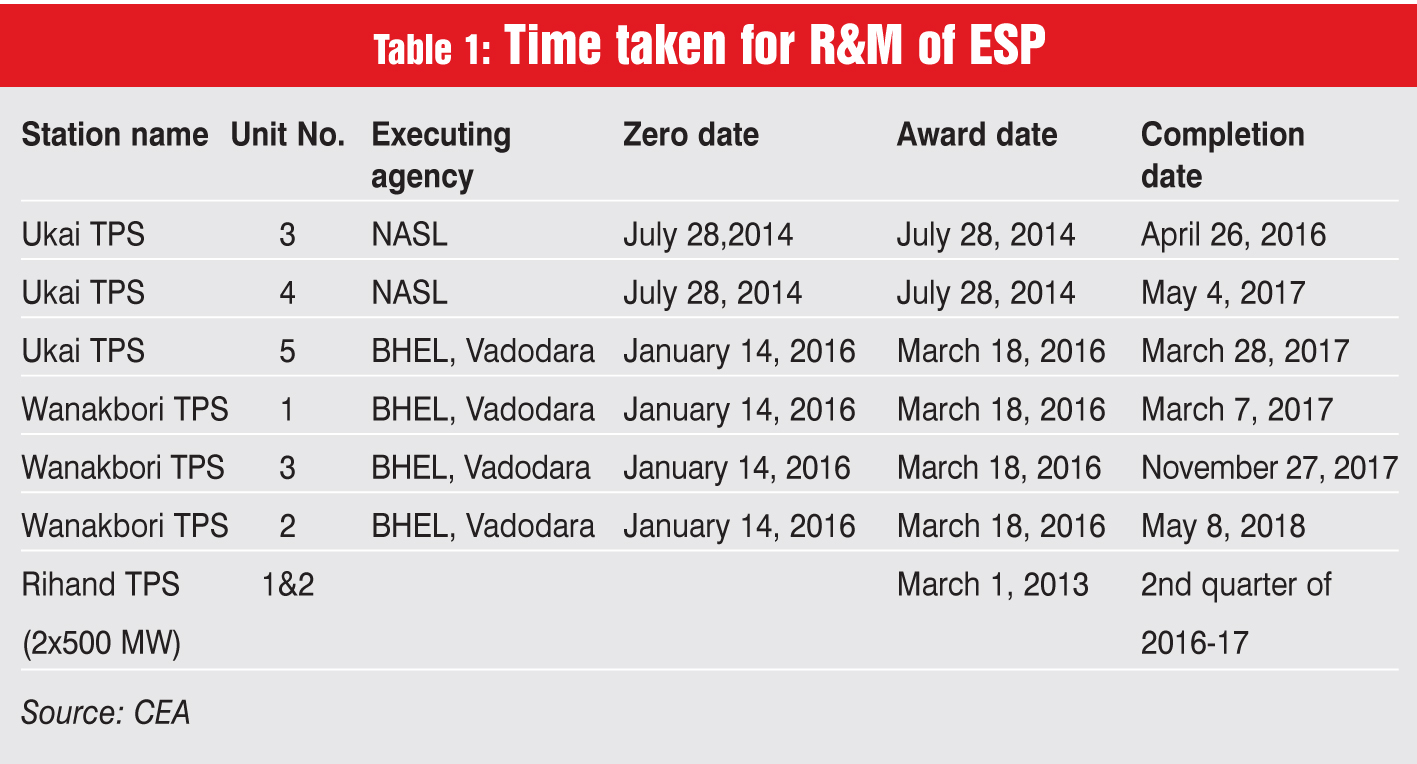 There are other operational issues as well. For instance, a major issue during augmentation of ESPs is generation loss. This is a partial loss as during pass-wise execution of ESPs, the unit cannot be run at full capacity. This leads to a delay in the execution, which further increases this loss. Another option of pass-wise completion versus completion of unit within unit for planned shutdown is currently under discussion and being reviewed by NTPC. Both options have their own advantages and disadvantages. The option of completion of all passes in a unit during a single shutdown will be tried in one of NTPC’s stations. This will provide an insight into the industry for evaluation of the two options.

Other challenges include inadequacy of clear space (unlike greenfield projects), constraints in civil works (especially for additional foundation works), constraints arising out of the existing plant layout and other issues related to execution such as delay in material supply and mobilisation. However, there are some feasible solutions for ESP augmentation to meet the emission target. There are options available to increase the collection area and addition of pass in parallel, increase the height of the existing ESPs up to 15 metres, addition of fields in a series or moving electrode (MEEP) in ESPs. An addition of a suitable MEEP area in a series is accommodated by converting the last few fields into MEEP fields as per requirements.

Net, net, efforts are being made to address these mechanical and operational problems in improving the efficiency of ESP systems to comply with the new PM norms. Efforts will also be needed to augment the technical and organisational capabilities required by major retrofit projects as these are expected to be even more complicated than those required by new systems. 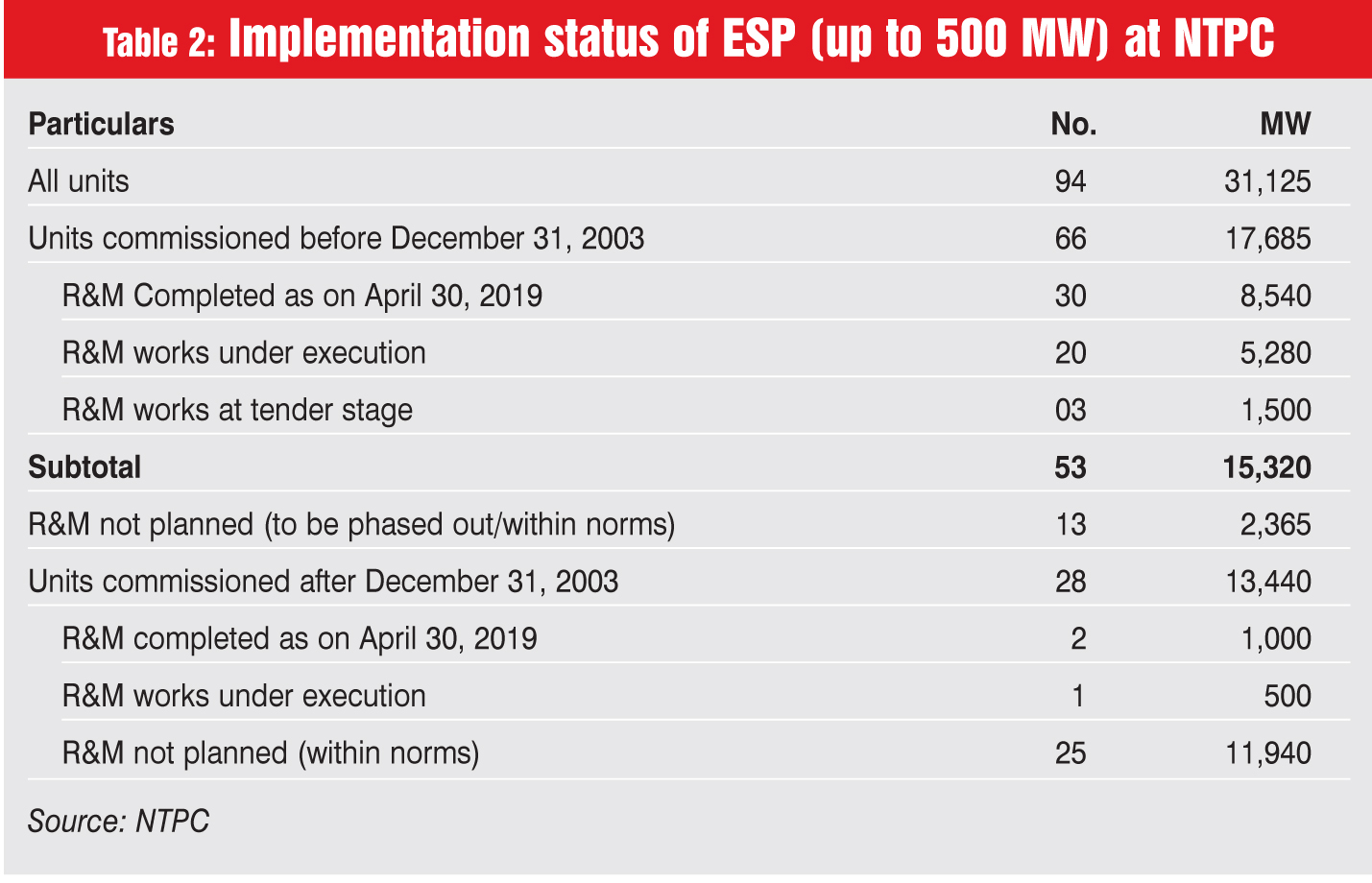