The proliferation of electric vehicles (EVs) is likely to put strain on the distribution network in multiple ways. Since the EV load is non-linear, it can cause severe power quality (PQ) issues owing to harmonic distortions, direct current (DC) offset, phase imbalance and voltage deviations in the distribution network. Further EVs are likely to be charged at home, typically during peak hours, resulting in transformer overloading and tripping. However, this is not expected to have any major impact at the national level since electricity demand by EV charging will only amount to about 1.5 per cent of the total current installed capacity. Nevertheless, distribution utilities and regulators need to take timely and appropriate steps to strengthen the distribution network and formulate adequate regulations to minimise PQ issues. This would also help in the utilisation of EV charging infrastructure to balance renewable power generation.

The expanding fleet of EVs requires the setting up of battery charging stations on a fast-track basis at multiple locations. When large-scale EVs are charged simultaneously, unwarranted peaks in power consumption and consequent PQ issues, including current distortion, increased power flow in power cables, transformer overloading, voltage drop, voltage imbalance and harmonic contamination, are bound to arise. In case EV charging takes place at home, it will result in the addition of heavy single phase loads in residential low voltage (LV) distribution systems.

EV interface devices deploy electronic converters, which are equipped with semiconductor-based switching elements. The input current in the converters has a high level of harmonics; this is reduced through harmonic filters. While no significant PQ issues are observed in the normal mode of operation of such interface devices, current distortions occur when such devices malfunction thus impacting the local distribution network adversely.

Another PQ disruption caused by EV charging is voltage imbalance in the LV distribution network. The main reason for this is asymmetrical consumption and production, which results in system loss, interference with network protection systems, decline in the performance of electrical equipment, and overheating. Voltage imbalance primarily impacts three-phase components such as transformers, synchronous machines and induction motors. It is imperative to quickly identify and rectify voltage imbalance issues to ensure smooth operation of the power system and the connected loads.

Further, EV charging stations cause harmonic distortions in power systems. While the high voltage transmission and distribution (T&D) network is capable of coping up with the extra EV charging load, the LV infrastructure may get strained thereby affecting the reliability of network assets such as transformers. It has been observed that quick charging stations cause significant voltage harmonics and losses, often violating the standard limits. If charging at such stations is concentrated at peak times, it can lead to transformer overloading. 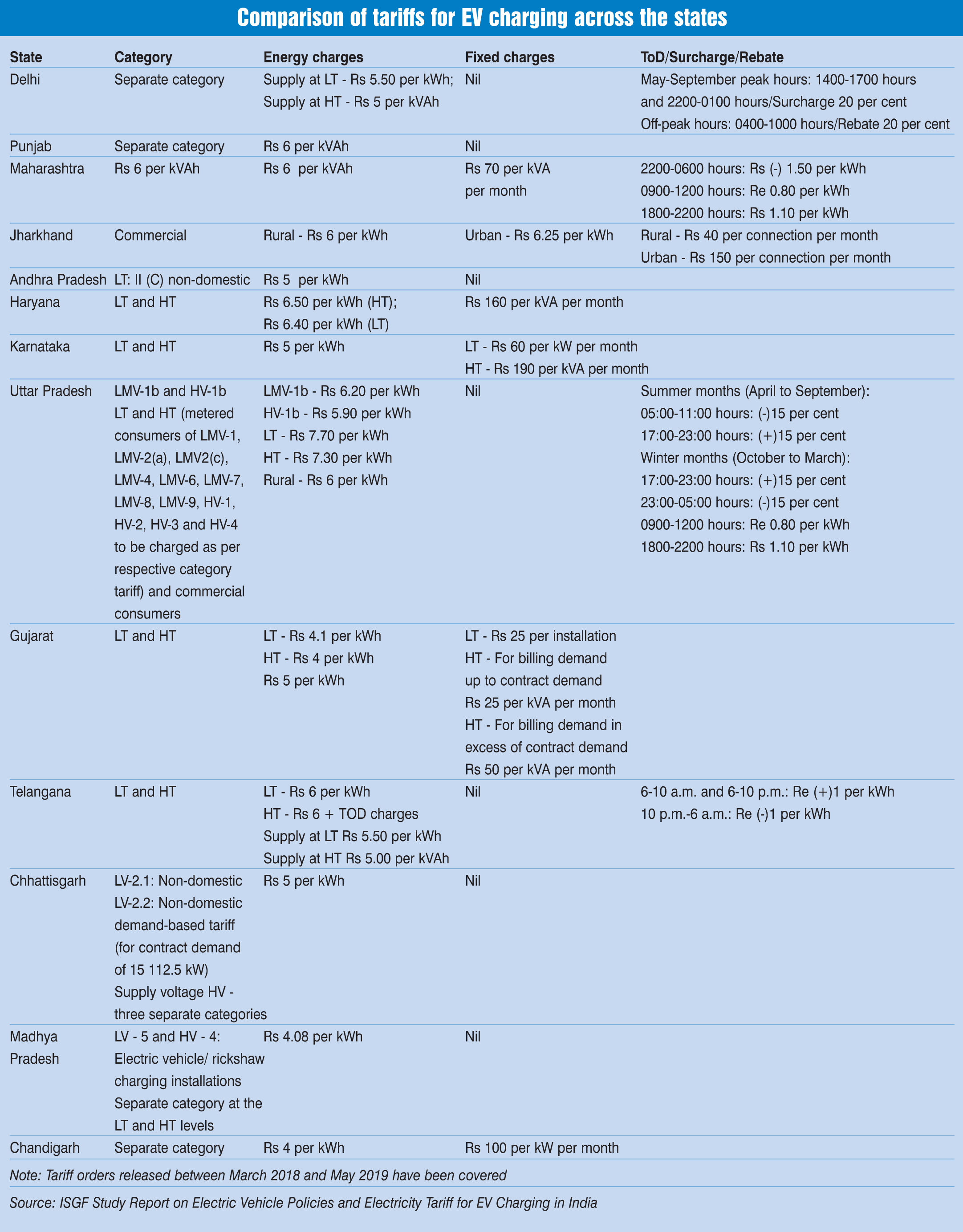 Impact on the grid

As per a report by Forum of Regulators (FoR), about 5,000 MW of EV-related additional load is expected to come into the system; however, the impact of such load will be negligible at the national grid level. In the FoR study, the Matlab/Simulink platform was used to analyse the effect of battery charging on different feeder systems. Based on EV charging profiles considered in the simulations, it was found that a baseline 50 per cent loaded commercial feeder can safely absorb up to 20 per cent additional EV load from fast charging, similarly, a residential feeder can safely handle residential and EV loads (fast charging) in the 60:40 ratio, respectively.

However, the peak co-incident charging scenario showed that a loading of around 20 per cent from fast chargers should be the threshold. This implies that should such high loading conditions occur, distribution licensees should build resilience by way of network expansion. The impact of slow charging on both commercial and residential feeders was negligible.

The PQ issues arising from EV charging can be dealt with by strengthening and upgrading the distribution network and deploying PQ enhancement systems. On the other side, EVs are expected to complement the integration of renewable energy capacity into the grid, as there are strong inter-linkages between the two. If the charging of EVs is distributed throughout the day and not concentrated during peak hours, it can balance renewable energy generation. The source of charging plays a crucial role in this case since, if thermal power is utilised for the purpose, it will offset the environmental benefits arising from EV usage. Therefore, renewables can be used for meeting the charging requirements of EVs. These vehicles and charging infrastructure can be used as energy storage solution and also for providing ancillary services such as frequency regulation, and shaving peak demand.

In order to facilitate the development of the EV market and ensure that the distribution network is not overloaded due to the charging of EVs during peak hours, right regulatory signals in terms of tariffs need to be given to industry players. Time-of-use (ToU)/time-of-day (ToD) tariffs can play a crucial role in encouraging consumers to charge their EVs during off-peak hours thereby reducing the load on the distribution network. As per the India Smart Grid Forum’s (ISGF) Study Report on Electric Vehicle Policies and Electricity Tariff for EV Charging in India, released in July 2019, Delhi, Maharashtra, Uttar Pradesh and Telangana have issued ToU tariffs for EVs. Delhi was the first state in the country to introduce a separate electricity tariff category for EVs. The EV tariff stood at Rs 6 per kWh – Rs 7 per kWh, on a par with the tariff for the highest domestic slab category. Andhra Pradesh discoms were next to propose a tariff of Rs 6.95 per kWh for EVs as part of their annual revenue requirement for the year 2018-19.

As of July 2019, 12 states and one union territory have issued electricity tariffs for EV charging in India. While some states have waived off capacity charges, others have imposed such charges starting at Rs 40 per  connection per month to 190 per kVA per month. The energy charges vary from Rs 4 per kWh to Rs 7.7 per kWh. The ISGF suggests that there should not be any capacity (or fixed monthly) charges based on connection capacity (kVA or kW) in the first three to five years as volumes will be low and the capacity will be barely utilised. The energy charges may follow the principle of time-of-day charges to discourage charging during peak hours and incentivise it during off-peak hours. As per FoR, regulators should allow a pass through of investments made in EV charging infrastructure by the distribution licensees in tariffs. In addition, new tariff categories should be created for EVs by allowing the recovery of incremental cost of infrastructure through wheeling charges over and above the average cost of service. In order to ensure that the electricity requirement of EVs is met from renewable energy sources, appropriate incentive mechanisms should be designed.

Going forward, discoms and state regulators are expected to take steps to facilitate the development of the EV ecosystem. On the technology front, vehicle-grid integration (VGI) technologies are emerging gradually and once these are commercially viable, they can further help in balancing the grid.