Waste heat in the industry is generated during fuel combustion or chemical reactions, and can be utilised in WHR boilers to generate steam. The increasing use of WHR systems in industries such as refineries, paper and pulp, cement, heavy metals, petrochemicals and chemicals for preheating, steam generation and power generation purposes is expected to drive market growth in the coming years.

Furthermore, government initiatives aimed at energy conservation and reduction in energy costs are expected to drive the WHR market. For example, the Ministry of Environment, Forest and Climate Change relaxed the Environment Impact Notification [EIA], 2006 norms on January 23, 2019, exempting cement plants, integrated steel plants, metallurgical industries (ferrous and non-ferrous), thermal power plants and other industries that have the potential to recover heat, from obtaining environmental clearance. Under the new norms, no “green” clearance is required for installing WHR boilers without any auxiliary fuel at captive power plants. The industries should be able to recover heat or utilise it for power generation to avail of this benefit.

According to the Bureau of Energy Efficiency, which has been promoting WHR under its Perform Achieve Trade scheme for several years now, WHR has a direct impact on efficiency. This is reflected in the reduction in utility consumption and costs, and process costs. It also reduces pollution, decreases equipment size by bringing down fuel consumption, and reduces auxiliary energy consumption.

On the flip side, high initial investment costs and complexity in WHR system design are some of the challenges. With extensive research and development, these designs will improve and installation costs will reduce in the long term.

In India, some highlights of the year in the WHR segment are: 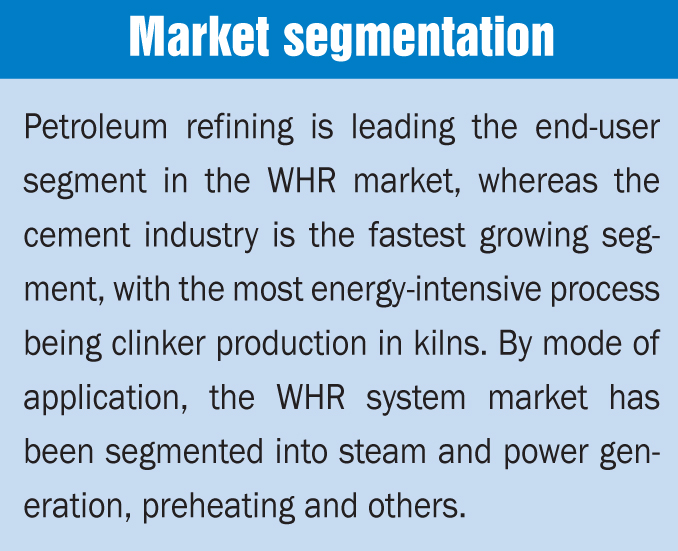 The growth of the Indian economy has led to significant infrastructural developments, led by smart cities. Besides, the development of industrial corridors and special economic zones has increased. All these developments have supported the growth of the captive power generation market in India. Cogeneration plants, also known as combined heat and power or distributed generation, offer higher efficiency as compared to single-generation plants. They produce additional energy using waste heat from components such as exhausts of manufacturing plants to provide electricity and heat for power plants. By recycling the waste heat, cogeneration plants are able to produce more energy, thereby saving the fuel used for production. This results in improved efficiency and reduced opex. These benefits and the growing need for reliable power supply and energy efficient technologies are expected to drive the adoption of cogeneration plants, mainly for captive power generation.

The captive power generation market in India is expected to grow at a compound annual growth rate (CAGR) of over 5 per cent during the 2019-23 period, according to the latest market research report by Technavio.

Among the end-user industries in India (metals and minerals, petrochemicals, cement, sugar, and others), the metals and minerals segment led the captive power generation market in 2018 with a share of over 40 per cent, followed by petrochemicals, cement, sugar and others. During 2019-23, the cement industry is expected to register the highest incremental growth, followed by the sugar industry.

One of the problems in the sector is that power purchase agreements (PPAs) are signed for short periods, so there is no guarantee of the PPA rates – they may be lowered eventually. Besides, tariff rates differ across states, the production cost is high with minimal investment avenues, and there is limited availability of biomass/fuel, etc. In addition, insufficient data on actual captive power installations and their fuel break-up discourage equipment suppliers from foraying into this segment.

According to Veeru Talawar, vice president, technical, Satish Sugars, Karnataka, “The sugar mills that have set up cogeneration plants are blaming the government for changing the PPA clauses. The predicted rates have been drastically cut down in both Karnataka and Maharashtra, in addition to the unpredictable climate (either floods or drought), which have led to huge losses in both states. In such cases, the government should waive the loan interest for some time. Finally, we used to run the mills for over 200 days, while now it has come down to 120 or 60 days even. We have to manage this manpower somehow, which can be idle for up to nine months. So no new technical personnel are joining this industry.”

In conclusion, both the private and public sectors need to address these issues at the earliest to accelerate these modes of clean power generation. Given the clear environmental and cost benefits, these systems can provide tremendous respite to India’s power problems.