As of September 2019, the coal-based generation capacity (including lignite-based capacity) stood at 203.15 GW, accounting for around 54 per cent of the country’s total installed capacity. Of this, the private sector accounts for the highest share of about 37 per cent, followed by the state and central sectors with a share of 33 per cent and 30 per cent respectively. Between 2013-14 and 2018-19, coal-based capacity increased at a compound annual growth rate (CAGR) of 6.68 per cent, from 145 GW to 200 GW. However, the annual capacity addition in the segment has been declining consistently. During 2018-19, 4 GW of capacity was added in the segment, as against a capacity addition of 8.7 GW, 11.55 GW and 22.46 GW in the previous three years respectively. In 2019-20 (as of September 2019), the net capacity addition in the segment stands at 2.4 GW.

In September 2019, NTPC Limited completed the commercialisation of a 660 MW unit of the 1,320 MW Khargone super thermal power station in Madhya Pradesh, the country’s first ultra-supercritical thermal power unit. Notably, the operational efficiency of the unit at 41.5 per cent is the highest in the country. Besides, it consumes less coal. Some of the other recently commissioned coal-based power stations are the 660 MW Unit 5 of NTPC’s Tanda TPS Stage II in Uttar Pradesh; 660 MW Unit 1 of the Nabinagar STPP in Bihar; and two units of 660 MW each (Units 3 and 4) of the IB Valley TPP in Odisha.

Between 2013-14 and 2018-19, generation from coal-based plants increased at a CAGR of 6.5 per cent to reach 1,022 BUs, accounting for almost three-fourths of the total electricity generated during the year. Sector-wise, the private sector accounted for the highest share (35 per cent) in the total coal-based power generation, followed by the central (33 per cent) and state (32 per cent) sectors. In the first six months of 2019-20, coal-based power generation in the country stood at 494 BUs, an increase of around 1 per cent over the corresponding period in the previous year.

With regard to the plant load factor (PLF) of coal-based plants, there has been a mixed trend in the past five-year period. Between 2014-15 and 2017-18, the PLF declined from 63.9 per cent to 59.7 per cent. During 2018-19, it increased marginally to 60.9 per cent, on account of government programmes aimed at increasing demand and enhancing fuel supply such as the Scheme for Harnessing and Allocating Koyala (Coal) Transparently in India (SHAKTI) and the Pilot Scheme for Procurement of Aggregate Power. However, in 2019-20 (April to September), the PLF of coal-based plants stood at 57.9 per cent, recording a decline of around 2 percentage points over the corresponding period of the previous year, which could be attributed to the rapid growth in power generation from hydro, nuclear and renewable energy sources. 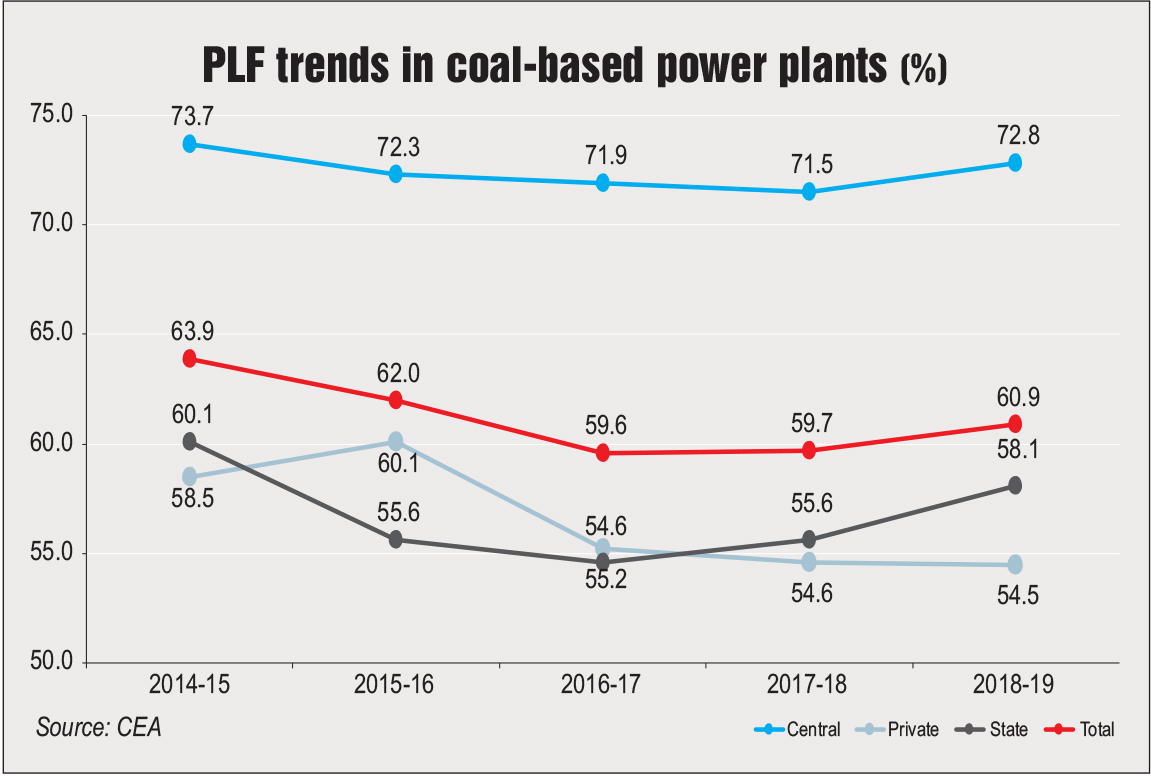 The operations and maintenance (O&M) of coal-based plants is essential to ensure efficient and uninterrupted operations of power stations. In view of the challenges in the coal-based power generation segment such as low fleet utilisation, ageing assets, rising fuel costs, tighter environment and safety regulations and competition from cheaper renewables, adopting efficient O&M strategies has become crucial. Under flexible operations of power plants, characterised by high ramping frequency and shutdowns, component life could get adversely impacted, resulting in early life failure compared to baseload operations.

The O&M of power stations ensures efficient power generation, prevents equipment failure and reduces unplanned outages, among other things. One of the O&M best practices adopted by developers is routine and capital maintenance of turbines to assess their actual condition of machines and restore them to the desired condition. It also entails gravimetric, mechanical and scanning electron microscope analysis, and sonic soot blowing of boilers. Besides, O&M practices that involve real-time asset monitoring and data and predictive analytics are being adopted by developers to ensure higher efficiency and cost savings.

Stressed assets in the coal-based generation segment remain largely unresolved due to factors such as lack of domestic coal linkages, lack of power purchase agreements (PPAs), delays in the realisation of receivables from discoms, lack of funds/capital with developers, sluggish project implementation, and regulatory and contractual disputes. A recent report by ICRA Research noted that only about 10 per cent of the 40 GW stressed coal-based capacity achieved resolution through acquisition by a new sponsor. Meanwhile, a number of other plants are at various stages of resolution. The slow pace of stressed asset resolution can be attributed to regulatory hurdles, absence of new long-term PPAs and subdued thermal capacity utilisation. Besides, it takes time to achieve sustainable resolution. Also, the poor financial position of discoms continues to hamper demand growth and signing of new long-term PPAs.

As per the latest estimates, 13 projects aggregating Rs 590 billion are no longer stressed and three projects worth Rs 270 billion are at various stages of resolution. Meanwhile, eight projects with a total investment of Rs 490 billion have been referred to the National Company Law Tribunal (NCLT), but not admitted as yet, and 10 projects worth Rs 380 billion have been admitted in the NCLT. The power ministry has reportedly asked NTPC Limited to bid for viable projects under the NCLT.

In a key positive development, in September 2019, the Appellate Tribunal for Electricity approved the transfer of ownership of Prayagraj Power Generation Company Limited (PPGCL) to Renascent Power Ventures Private Limited without any reduction in the adopted tariff. The deal signed in November 2018 for the acquisition of 75.01 per cent stake in PPGCL, which owns and operates the 1,980 MW Bara coal-based power plant, was stuck amidst a regulatory dispute as the Uttar Pradesh Electricity Regulatory Commission had asked new promoters to reduce the tariff. 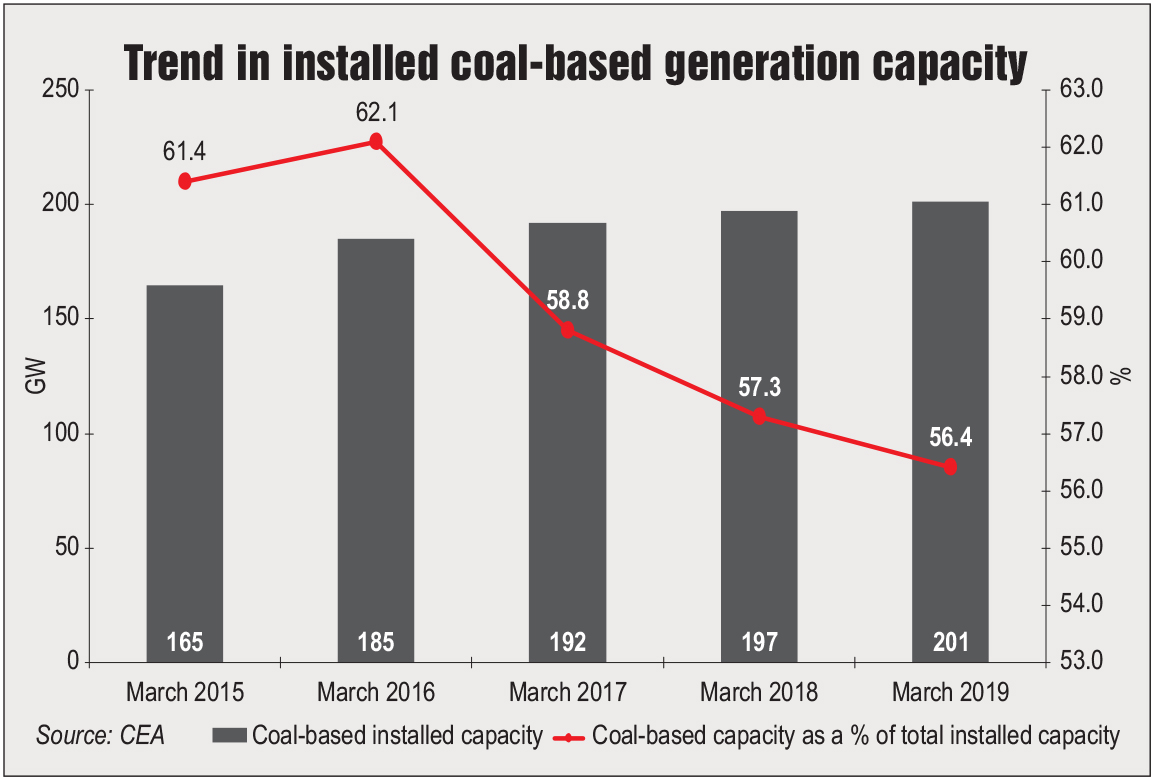 The progress on compliance with the revised emission norms notified by the MoEFCC in December 2015 has been sluggish. So far, flue gas desulphurisation (FGD) systems have been commissioned in only three private sector units aggregating 1,820 MW. As of November 2019, tenders for installing FGDs have been issued for power stations aggregating 98,565 MW (59 per cent of the planned capacity), while bids have been awarded for 35,160 MW (21 per cent). Sector-wise, the central sector has awarded bids for around half of the planned FGD units, while the state and private sectors have awarded bids for only 1 per cent and 2 per cent of the planned FGD units. With regard to NOx emissions, around 10 GW of capacity will require installation of selective catalytic reduction and selective non-catalytic reduction as per a study by the Centre for Science and Environment, while the remaining 187 GW will be able to meet the norms through secondary methods. Many TPPs have started installing primary control systems for NOx reduction and around 50 per cent of the power plants already comply with the relevant NOx norms. In April 2019, NTPC Limited awarded a Rs 1.42 billion contract to GE for the supply and installation of low-NOx combustion systems for 10 GW of TPP capacity across the country. This is the first large-scale project that NTPC has awarded for installing low-NOx combustion technology at its TPPs. Overall, the limited availability of vendors, lack of skilled manpower, time constraints, high capex requirement and equipment downtime are some of the challenges faced by developers in complying with the revised emission norms.

As per the CEA’s draft report on “Optimal Generation Capacity Mix for 2029-30”, the installed coal-based capacity is estimated to reach 266 GW by the end of 2029-30, accounting for 32 per cent of the total installed capacity, the second highest after solar capacity at 300 GW (36 per cent in the installed capacity). On the power generation front, coal is expected to account for a majority share (50 per cent), followed by solar at 23 per cent and wind at 12 per cent. Despite the growing focus on renewables, coal-based power generation will continue to hold sway. That said, the role of coal-based power generation is expected to transform significantly from meeting baseload requirements to load balancing. In this regard, flexibilisation of conventional power plants has been gaining ground. Besides, owing to environmental concerns, ultra-supercritical technologies will remain the preferred option for upcoming power plants in the country.

Net, net, while coal-based power generation will continue to meet the majority of the power demand in the country, resolution of issues and challenges facing the segment such as poor offtake of power by discoms and stressed power assets will significantly benefit the segment.