Over the past couple of years, there has been an increasing focus on the implementation of smart meters in the country. It is a key component of various central government schemes and programmes such as the Ujwal Discom Assurance Yojana (UDAY), the Integrated Power Development Scheme (IPDS) and smart grid pilots. Energy Efficiency Services Limited (EESL) is implementing the Smart Meter National Programme (SMNP) for replacing 250 million conventional meters. Besides this, various states have issued mega tenders for the procurement and installation of smart meters. Notably, bulk tendering with demand aggregation has brought down meter prices. A look at the various central and state initiatives driving smart meter uptake in India… 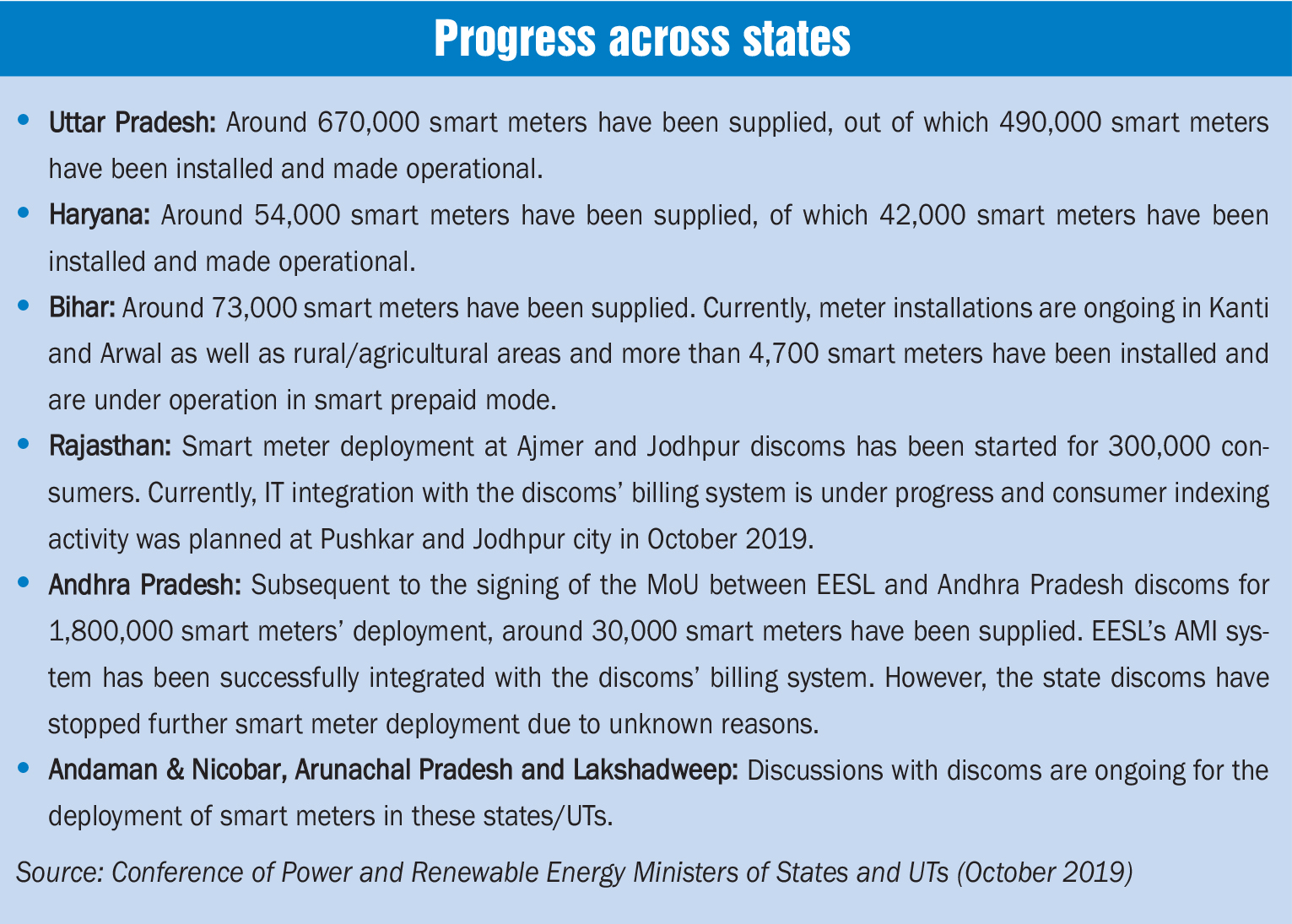 Launched in 2014, the IPDS envisages the installation of smart meters with supervisory control and data acquisition (SCADA) systems in all urban areas. A project cost of Rs 8.3 billion and a grant of Rs 5 billion has been approved by the government under the scheme. As of November 2019, a government grant of Rs 9.5 million has been released. Nearly 4.1 million smart meters are targeted to be installed under the scheme by 21 discoms across 12 states. The states can either procure them on a stand-alone basis or through aggregators such as EESL and PFC Consulting. In addition to this, under the scheme, 115,049 smart meters have been sanctioned for five states, of which 88,780 smart meters have already been installed.

The Ministry of Power (MoP) has sanctioned 12 smart grid pilot projects with 50 per cent funding from the government. All these projects (excluding the Smart Grid Knowledge Centre at Manesar) involve the implementation of advanced metering infrastructure (AMI), along with other functionalities such as outage management system, SCADA and demand response. Five smart grid projects under the National Smart Grid Mission (with 30 per cent funding from the MoP), which are currently under way, also entail AMI/smart meter implementation. Around 156,637 smart meters have already been installed in the AMI projects taken up under smart grid pilots being monitored by the National Smart Grid Mission (NSGM) and around 750,443 smart meters are expected to be installed in five NSGM projects, which are under implementation/award. 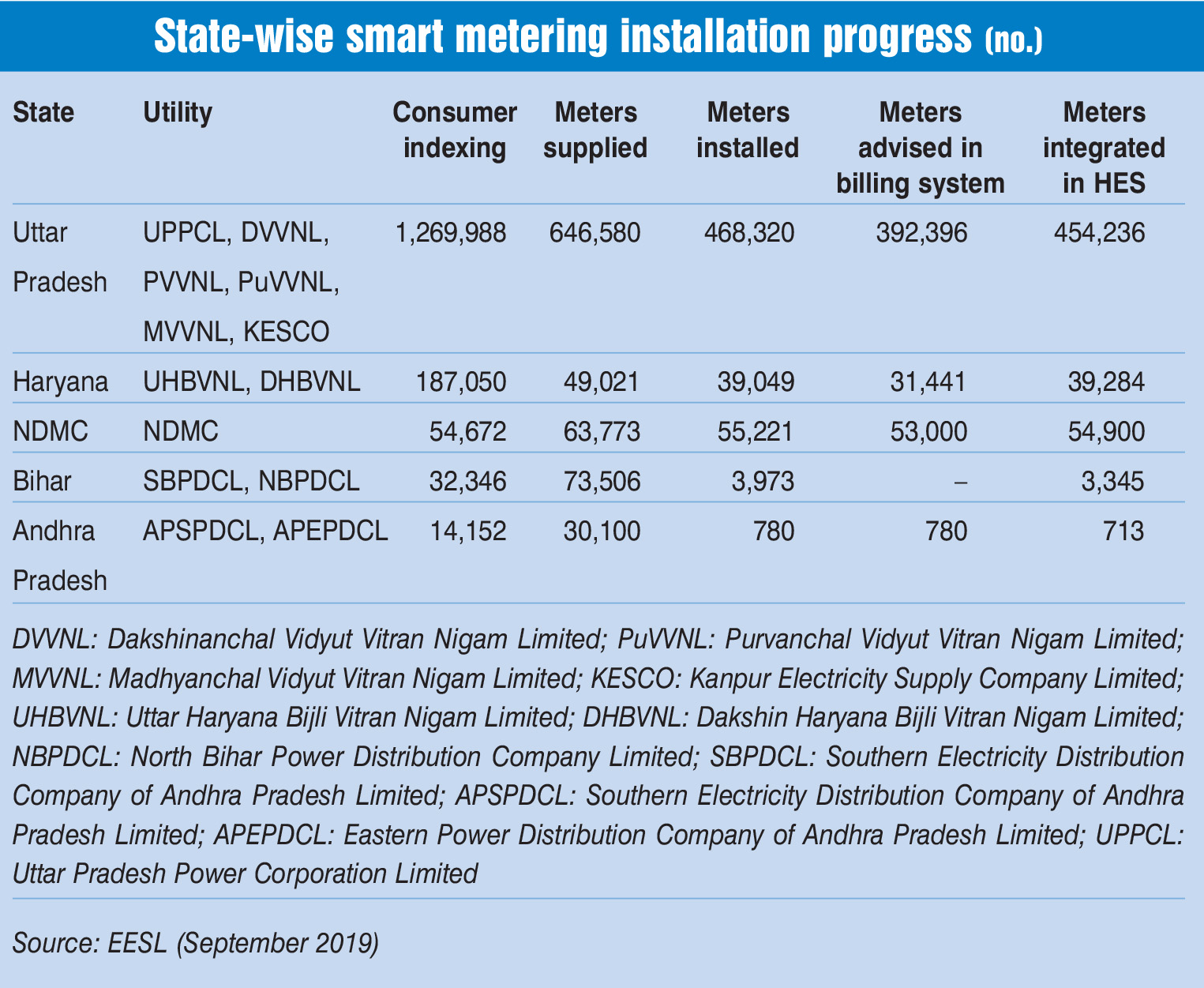 EESL is implementing the SMNP under which it aims to replace 250 million conventional meters with smart meters. EESL is implementing its proven model of bulk procurement, demand aggregation and monetisation of savings. As a part of the contract, EESL, under the programme, undertakes system integration-related activities such as installation, testing, commissioning and integration of the AMI system; as well as field activities such as consumer indexing, meter installation and maintenance. So far, EESL has issued three tenders for the procurement of 5 million smart meters each. Its first tender on behalf of Uttar Pradesh and Haryana utilities was awarded to ITI Limited, while the second tender on behalf of Bihar and Andhra Pradesh was secured by a French integrated electricity company, EDF. It issued a third tender in July 2019 for meter installation across the country. 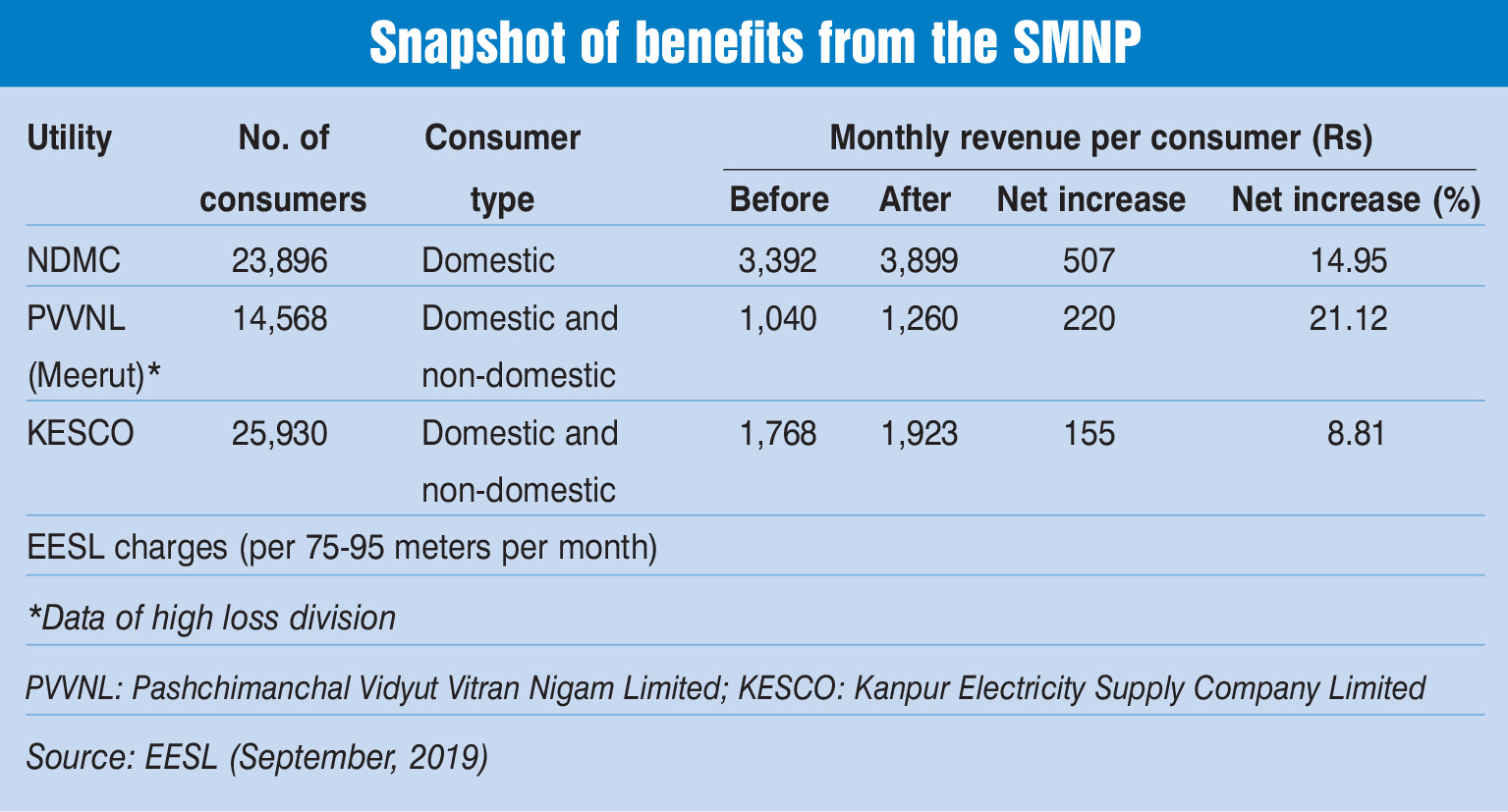 With regard to the implementation of the SMNP, smart metering roll-out is being undertaken in select areas of the New Delhi Municipal Council (NDMC), Uttar Pradesh, Haryana, Bihar, Andhra Pradesh, Telangana, Rajasthan and the Tumkur Smart City. The total smart meter requirement across these states is 22.33 million. Notably, smart meter installation in the NDMC area has been completed and NDMC has become the first municipal council in the country to implement 100 per cent smart metering solutions.

In a key development, in October 2019, a new partnership has been created by EESL with the National Investment and Infrastructure Fund (NIIF) towards meeting the goal of deploying 250 million smart meters. The smart meters will be funded, installed and operated by IntelliSmart Infrastructure Private Limited, a new joint venture company set up by the two entities. “EESL has been spearheading the smart meter deployment in India with the installation of over 625,000 smart meters. This partnership of NIIF and EESL will give a fillip to the smart meter ambition of the Government of India,” stated EESL in a press release. With the replacement of 250 million conventional meters with smart meters, the billing efficiency is expected to improve from 80 per cent to 100 per cent, and has the potential to increase discom revenues by Rs 1,104 billion.

To conclude, the next few years are expected to see a significant policy push towards smart metering. The proposed amendments to the Electricity Act, 2003 mandate the use of smart meters. The MoP announced an ambitious target to convert all meters to smart prepaid meters over three years starting April 2019. To conclude, smart meter deployment in India is slowly gaining ground and a complete shift to smart meters is expected in the country years.