India is the third largest country in terms of electricity generation, as per the International Energy Agency. However, even though absolute figures are staggering, the country’s per capita electricity consumption is one-third of the world average. With rapid economic development, this demand is likely to increase by 170 per cent by 2031-32, as per estimates by the Central Electricity Authority (CEA).

On the back of aggressive targets, proactive policies, strong investor sentiment, cohesive public and private sector participation, sharp decrease in costs, and support from the states, among other factors, India’s installed renewable energy capacity increased from 38 GW to 72 GW between 2015 and 2018. While these positive trends have led to higher renewable energy generation and supply, the demand uptake has not grown significantly. Accounting for about 50 per cent of the total electricity consumption in the country, the corporate sector has a crucial role to play in the electricity sector. It is, therefore, important to understand the corporate demand and perspective for driving the uptake of renewables.

In terms of India’s ambitious 2022 renewable energy goal of 175 GW also, the corporate sector has a key part to play. The power sector has transformed rapidly with a substantial fall in renewable energy prices (solar and wind power) in the past few years; the prices plummeted to historic lows during 2017-18, with renewable energy now comfortably competing with conventional coal-based power. Thus, while the business case for procuring renewable energy is strong, its procurement by the corporate sector is still sluggish owing to policy and regulatory uncertainties, complex and often inconsistent national- and state-level policies and regulations, low awareness of compliance processes, and infrastructure issues. This article examines the role of the corporate sector, constituting commercial and industrial (C&I) consumers of power, in driving greater uptake of renewables in India. Buyers of clean energy include corporates that procure renewables through captive generation, power purchase agreements (PPAs), or the purchase of renewable energy certificates (RECs), voluntarily or for compliance reasons. We have focused more on solar and wind power due to the overall rising installed capacity and greater interest shown by corporates when compared with other renewable energy technologies. 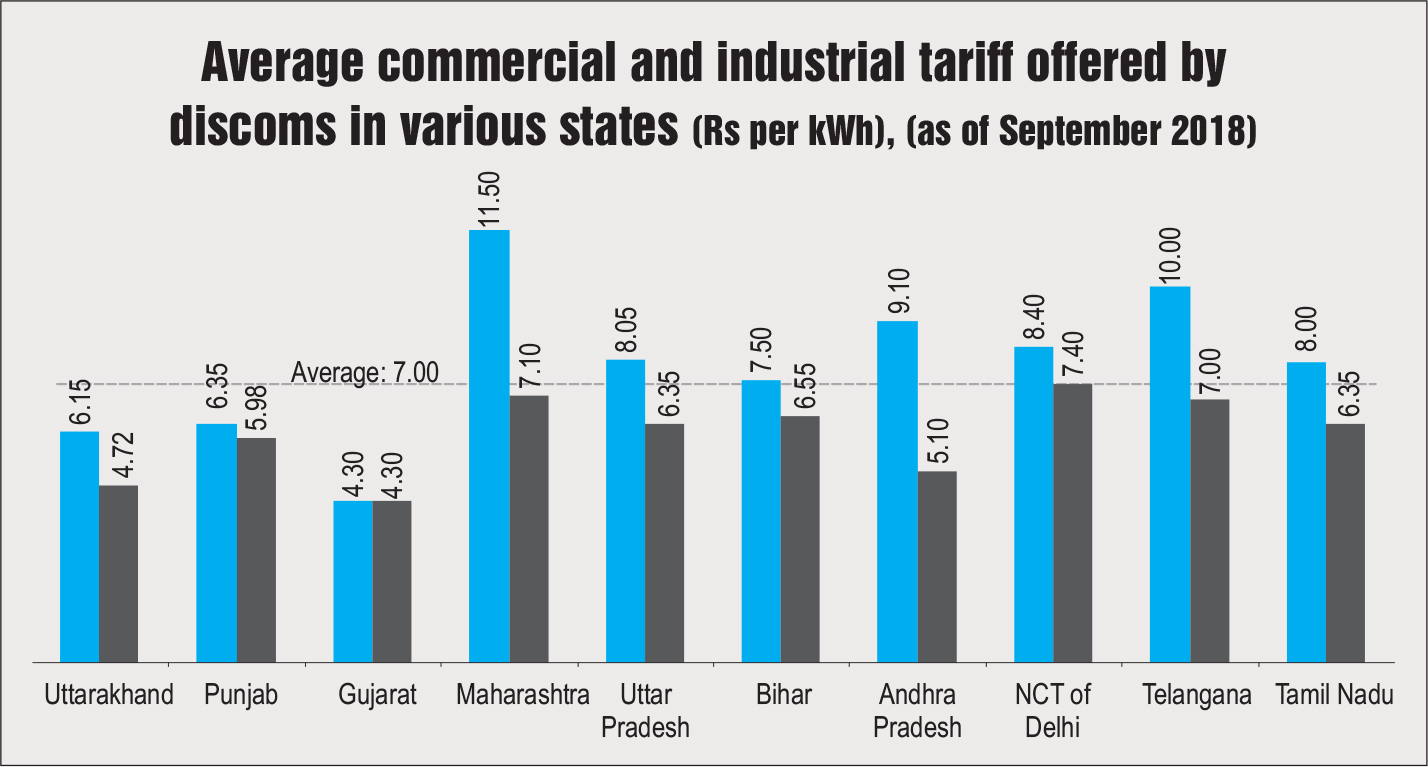 As per the CEA, the total electricity consumption was 1,130 TWh during fiscal year 2018, with about 50 per cent being consumed by C&I consumers, followed by the domestic sector (24 per cent), agricultural sector (18 per cent) and the rest by other sectors. However, corporate demand is likely to increase by over 66 per cent by 2030 from fiscal 2018 levels. A large number of corporate consumers do not rely on grid electricity alone; many generate their own electricity through captive power plants (CPPs). As of March 31, 2019, CPPs accounted for about 16 per cent (55 GW) of the total installed capacity of all energy sources put together (around 356 GW), based on media reports. The installed capacity of CPPs grew at a compound annual growth rate of about 6 per cent during the 2012-18 period. About 60 per cent of the CPPs are based on the steam cycle, followed by diesel, gas, hydro and biomass. A large number of corporates prefer to set up CPPs (including group captives) instead of exploring other procurement models.

It has been noted that target setting is one of the most important steps that demonstrate long-term vision and commitment for addressing climate change. WWF-India conducted a survey in 2019 of the top 100 companies of the National Stock Exchange and found that 69 per cent of the companies had procured renewables in some form or the other, 27 per cent had set clear greenhouse gas (GHG) reduction targets, 22 per cent had set renewable energy procurement targets, and 10 per cent had set both targets. The survey also found that 61 per cent of the companies did not have any set targets (GHG or renewable energy).

While 26 companies have set the targets for 2020, the rest of the companies have long-term targets, that is, for 2030 and beyond. Eight companies (Hindustan Zinc, Tech Mahindra, Hindustan Unilever, Marico, Ambuja Cement, Wipro, Yes Bank, and Mahindra and Mahindra) have set GHG reduction targets or commitments based on the Science Based Targets initiative framework, whereas five (Tata Motors, Nestle, P&G, Hindustan Unilever and Infosys) have committed to procuring 100 per cent renewable energy for their operations. In addition, five banks out of nine have solar-based ATMs or renewable energy projects for captive power consumption.

The primary drivers for corporates investing in renewable energy are:

Corporates identified policy and regulatory challenges as the primary factor restricting the uptake of renewables in India, despite a strong business case for renewable energy procurement. For example, in 2017, the Karnataka Electricity Regulatory Commission (KERC) identified the need for mid-term revision of the generic tariff for wind power plants in light of the drop in prices of wind power during the auctions held by the Solar Energy Corporation of India. The discovered price of wind power through reverse auction was 20 per cent less than the Feed-in tariff price of Rs 4.50 per kWh determined by the KERC earlier. Following this, the state regulator revised the tariff downwards to Rs 3.74 per kWh. The revision was a big blow for developers with whom the state discoms had already signed PPAs at the earlier determined tariff of Rs 4.50 per unit; some of these projects were already commissioned and injecting electricity into the grid. The KERC declared that the PPAs that were yet to be approved by it would be passed only at the newly notified tariff. This led to appeals by the developers. After intervention by the state government, the KERC had to accede to their  request and approve the PPAs (relating to 242.5 MW of capacity) at Rs 4.50 per kWh.

Recommendations for policymakers and regulators

Due to such and other cases, issues related to policies and regulations have been identified as the biggest challenge restricting the corporate sector from procuring renewable energy. A few recommendations for policymakers and regulators are mentioned below:

Policymakers and regulators should address these barriers and develop policies that take a holistic approach to incorporate the interests of buyers/sellers of renewable energy, and the intermediaries.

Corporates in India are increasingly opting for renewable energy to meet their electricity requirements and now have access to a variety of procurement models. Two of these models involve the actual procurement/generation of renewable energy through direct capital investment or through PPAs, while the third involves the purchasing of RECs. As per the WWF survey, about 60 per cent of the corporates identified CPPs as their preferred model despite high upfront capital investment, followed by 23 per cent preferring PPAs with third parties and 20 per cent choosing RECs.

The selection of any one or more of these models depends upon various internal factors such as investment potential, management priorities, team strength, and the policy and regulatory environment. Many large corporates tend to use a combination of these three models, depending upon their specific requirements.

Every procurement mechanism has its inherent risk and return profile, which needs to be weighed by corporates to choose the best fit for their requirements. The accompanying table highlights some of the pros and cons. 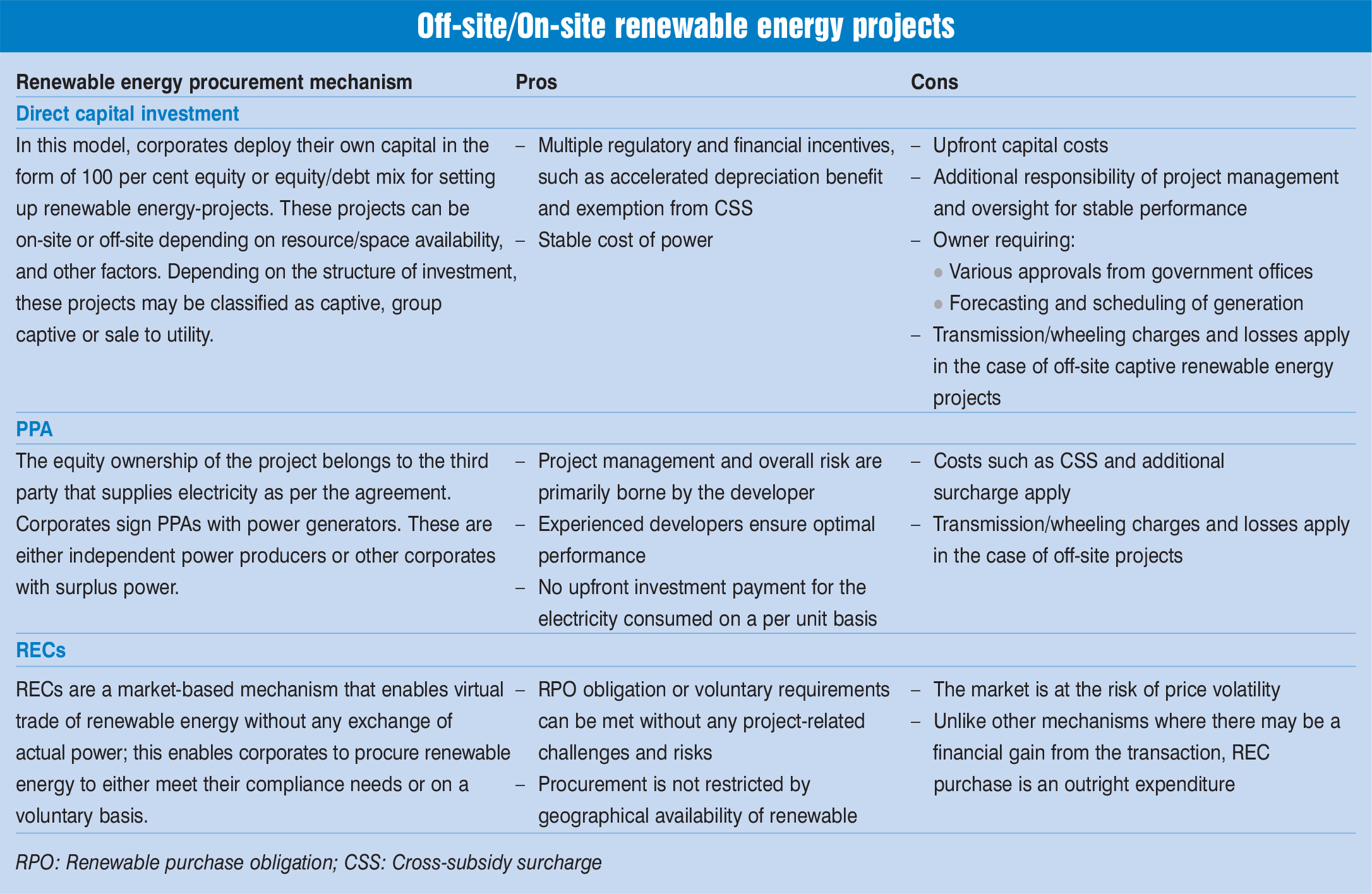 As part of the WWF survey, corporates were asked to identify their renewable energy technology preference. About 74 per cent corporates chose solar over other technologies, primarily due to ease of installation, flexibility of system size, better predictability of generation, and diminishing costs, among others. Interestingly, of the 69 per cent of the companies that have procured renewable energy, the majority (62 per cent) has relied on solar, 29 per cent on wind, 6 per cent on other clean energy sources, while 3 per cent has not disclosed the technology used.

The source of finance becomes an important consideration for corporate buyers of renewable energy. As per WWF’s primary survey, about 44 per cent corporates identified equity (investing 100 per cent) as their preferred choice for renewable energy financing, while 31 per cent mentioned an equity-debt mix. In case of debt financing, the loan raised could be recourse or non-recourse, depending on various factors such as PPA terms and promoter capacity. However, non-recourse financing comes with higher interest rates and depends on corporate relationships with financial institutions.

Proactive and conducive policies, strong investor sentiment, cohesive public and private sector participation, sharp decrease in costs, and support from the states, among other factors, can scale up the demand uptake significantly to meet the renewable energy targets. To take advantage of this sector, corporates should set clear and ambitious procurement targets as part of a comprehensive GHG reduction strategy to address climate change. Corporates should also choose a renewable energy procurement model after a careful assessment of various models and their parameters, as feasibility can significantly vary based on the model. They should look beyond short-term price trends, so that they do not get caught up with short-term variations. It is important to analyse risks and opportunities, as this allows corporates to plan their implementation strategies better and anticipate the risks accordingly.

Finally, knowledge sharing and capacity building are important for corporates to keep abreast with the dynamic environment of renewables.