To achieve sustainability, Europe has set an ambitious target for its energy sector and the United Kingdom UK has been a front runner in this race. In June 2019, the country set a target for a reduction in greenhouse gas (GHG) emissions of at least 100 per cent (compared to 1990 levels) by 2050.

In these times of global climatic emergencies, the country has increasingly focused on heat decarbonisation, decentralisation of power generation, improvement in the share of renewables in the energy mix, increased use of hydrogen and other green gases, improved competition in the wholesale and retail markets, the roll-out of electric vehicles and penetration of battery storage. Simultaneously, investment requirements of power utilities will also rise owing to the growth expected in electricity consumption and the government’s target of reducing carbon emissions.

Keeping the market structure in view, the British energy regulator Office of Gas and Electricity Markets (Ofgem) protects consumers’ interests by regulating utilities through price control periods wherein it sets the maximum amount of revenue that transmission operators can recover from users. A decade ago, Ofgem set out to develop a new regulatory framework that would reward utilities for innovation and for meeting the changing expectations of consumers and society. The culmination of that process was the development of a framework referred to as RIIO – Revenue = Incentives + Innovation + Outputs.

The current price controls for electricity transmission networks, RIIO-1, will end on March 31, 2021. Thereafter, Ofgem will put in place new price controls, RIIO-2, for 2021-26, which presents a crucial period for  British power utilities to help deliver the UK’s net-zero target.

As RIIO-1 is due to end soon, in December 2019 the three power utilities adhering to Ofgem’s regulation submitted their respective business plans outlining the total expenditure (totex) they seek to spend over the RIIO-2 five-year period 2021-26. NGET submitted its business plan calling for GBP 7.1 billion, SHET has outlined a GBP 2.4 billion totex, and SPT has estimated a GBP 1.375 billion expenditure plan for the RIIO-2 price control period. Ofgem will now hold consultations with stakeholders in 2020 before determining the level of investment for the said five-year period. The business plan of each power utility for the RIIO-2 period is discussed in the following sections… 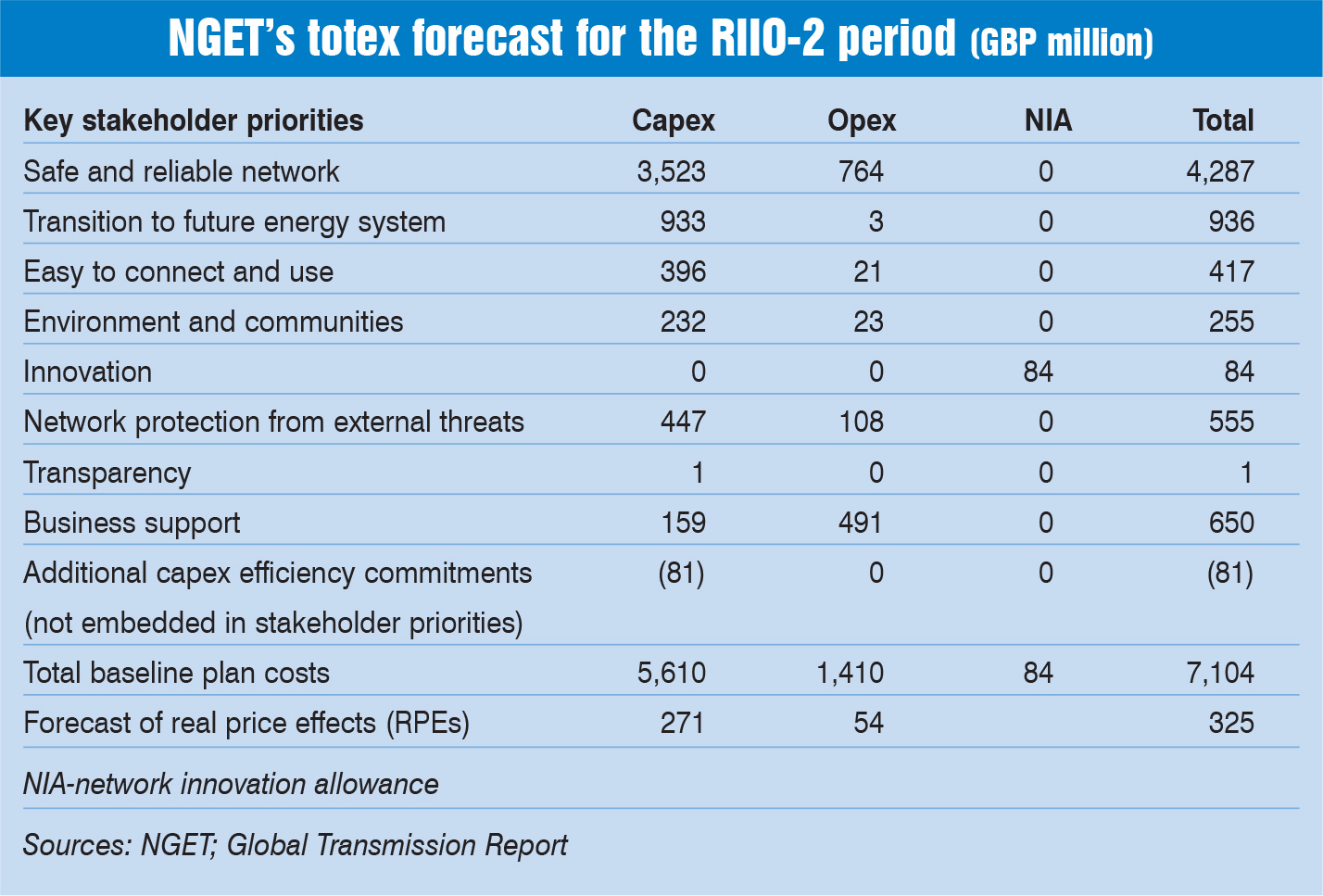 Under the business plan submitted to Ofgem for the RIIO-2 period, NGET has proposed a baseline totex of GBP 7.1 billion for the 2021-26 period. 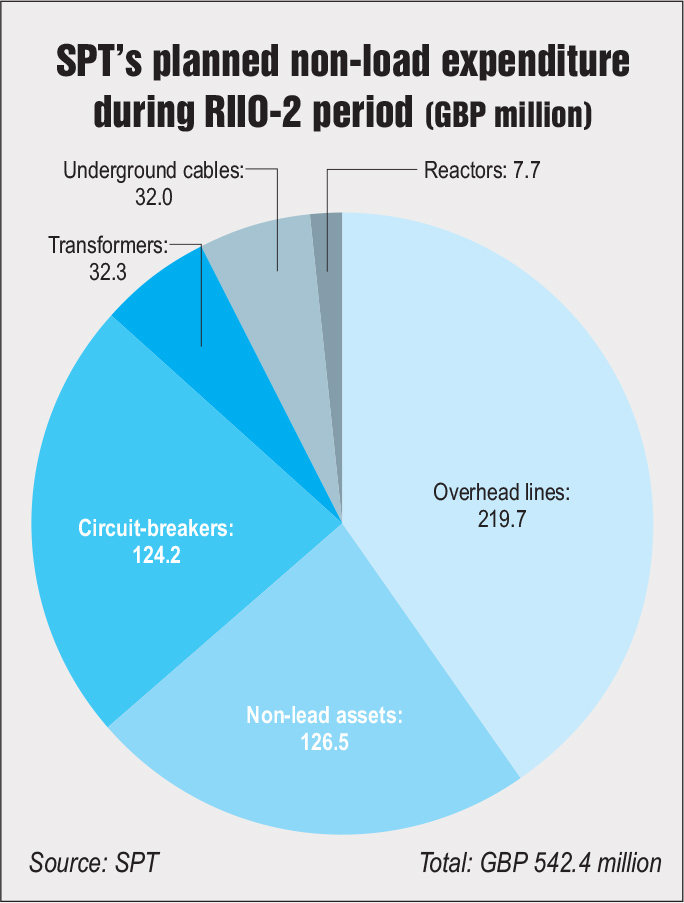 Some of the features of the business plan proposed by NGET are listed below. 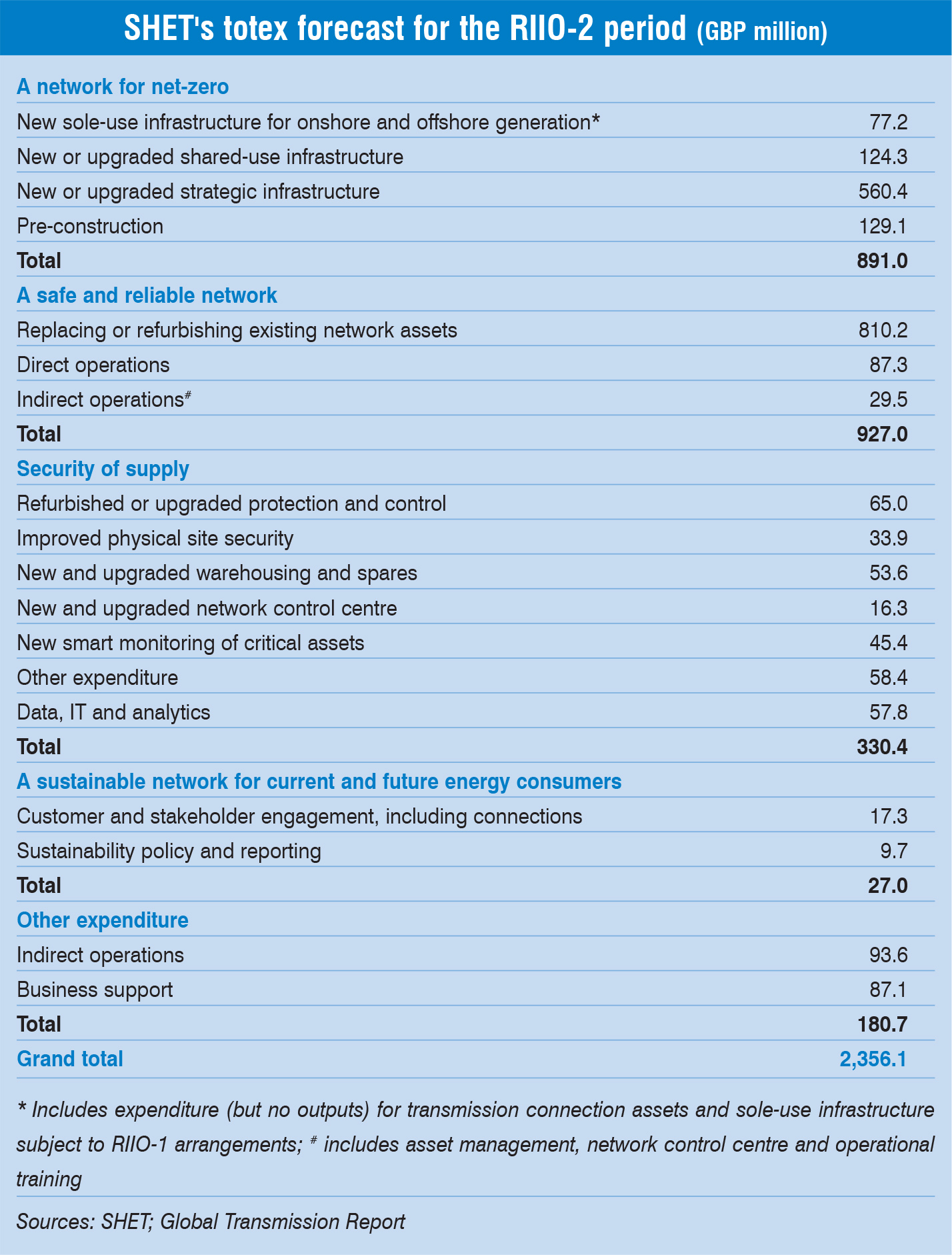 SHET, part of the SSE Group, is responsible for the power transmission network in the north of Scotland. SHET, together with Scottish Hydroelectric Power Distribution and Southern Electric Power Distribution, operates under the name of Scottish and Southern Electricity Networks (SSEN), a part of the SSE Group. The SHET network spans nearly 5,377 ckt. km across the 132 kV, 220 kV, 275 kV and 400 kV levels in the north of Scotland.

Specifically, the business plan aims to deliver the following:

A network for net-zero (GBP 891 million): With the UK government’s target to achieve net-zero emissions by 2050, the Scottish government in May 2019 passed a legislation to introduce the net-zero target for 2045, with additional targets to reduce emissions by 75 per cent by 2030 and 90 per cent by 2040. The utility proposes an investment of GBP 891 million to accommodate the renewable generation necessary for decarbonisation of the economy. Notably, the north of Scotland and its islands have significant renewable energy resources in the form of onshore and offshore wind, hydro and marine and tidal (potentially). By the end of the RIIO-2 period, SHET has forecast doubling of the total generation capacity connected to northern Scotland’s transmission system to 8.1 GW by March 31, 2021. Further, it has forecast that connected generation will rise to between 13.6 GW and 15.7 GW by March 31, 2026. Further, clean electrification will play a crucial role in removing GHG emissions from heat and transportation networks. This energy transition will further be driven by smart and flexible grid networks.

A safe and reliable network (GBP 927 million): To ensure 100 per cent electricity reliability of the transmission system, SHET plans to invest GBP 810.2 million to replace or refurbish the existing network infrastructure across 28 schemes; incur direct operating costs of GBP 87.3 million; and spend GBP 29.5 million to improve network reliability and achieve 100 per cent reliability in the region by 2026, and enhance asset management and operations.

Security of supply (GBP 330 million): To provide power supply security, SHET proposes to invest GBP 272.6 million in the refurbishment, replacement or upgrade of network equipment and systems; and GBP 57.8 million in the existing business IT and operational technology, plus cybersecurity compliance. The plan also proposes an investment of GBP 208 million to create a sustainable network for current and future energy consumers, as well as support everyday business operations.

SPT is the transmission owner in the central belt and south of Scotland, and is a wholly owned subsidiary of Scottish Power Energy Networks. As of 2018, the utility’s transmission asset portfolio included 4,307 ckt. km of transmission lines, of which nearly 86 per cent were overhead, while the remaining were underground. As per the RIIO-2 business plan submitted to Ofgem, SPT plans to make a total controllable expenditure of GBP 1.37 billion during the 2021-26 period, working out to an average of GBP 275 million across each year of the RIIO-2 period.

Specifically, of the GBP 109.3 million that SPT proposes to spend on the connection of new generation, it will invest GBP 40 million to facilitate the connection of 12 new generation sites with a total capacity of 900 MW of renewable energy. Further, it plans to create 2,027 MVA of new network capacity across 13 more projects to allow the power generated to be transmitted to other parts of the network at a cost of GBP 69 million.

Given the growing share of renewable energy in the total energy mix, much of which is generated in remote and widely dispersed locations, SPT plans to spend GBP 190.2 million on upgrading its network. The planned projects include the 400 kV Hunterston East-Nielston reinforcement project (GBP 23.4 million); the 275 kV East Coast onshore upgrade project (GBP 12.5 million, 2023); the 400 kV East Coast onshore incremental reinforcement project (GBP 39.5 million, 2026); the 400 kV Denny-Wishaw reinforcement project (GBP 146.1 million; GBP 19.2 million in RIIO-2, 2028); and the eastern high voltage direct current link from SPT-NGET, which includes the construction of a link from the Torness area to a new convertor station at Hawthorn Pit in NGET’s area. SPT also plans to spend GBP 116.2 million on upgrades at the point of connection with Scottish Power Distribution, so as to fully utilise the existing generation and enable the connection of additional generation capacity. With SPT moving to net-zero and the phasing out of nuclear generation, which will reduce total generation by 2.2 GW, network reinforcement is vital to unlock the region’s full potential. To this end, SPT plans to incur a baseline expenditure of GBP 124.4 million to reinforce the network to adapt it to the changing generation and demand landscape.

In line with the UK government’s target of achieving net-zero by 2050, SPT plans to ensure the resilience of its transmission network. Therefore, the utility has planned GBP 542.5 million in expenditure across six categories such as overhead lines, non-lead assets, circuit breakers, transformers, underground cables and reactors.

SPT plans to invest GBP 292.3 million to support and secure its network. Of this, GBP 139.5 million will be spent on engineering and corporate support; GBP 76 million on network operations; GBP 21.1 million for the Net-zero Fund; GBP 12.2 million on cybersecurity; GBP 23.1 million on its land infrastructure; GBP 5.5 million on flood mitigation; and GBP 14.9 million on non-operational capex.

Over the past decade, the UK has made considerable progress in the decarbonisation of its electricity generation sector. While this change has been rapid and profound, much remains to be done to meet the government’s ambitious net-zero targets.

With the RIIO-2 price control period expected to begin in 2021, consumers can expect rapid changes in the energy system. In compliance with Ofgem’s regulations, the utilities have developed ambitious investment plans to support and facilitate the government’s net-zero ambitions and objectives for clean growth. However, Ofgem’s nearly exclusive focus on short-term reductions in consumer bills and reducing networks’ returns can significantly hamper or slow down the progress in achieving the country’s decarbonisation targets. It is, therefore, necessary to strike the right regulatory balance between attracting the necessary levels of investment and ensuring that consumers also contribute their fair share to power networks.