Diesel generator (DG) sets are popular power backup options for residential and commercial consumers. They are also an important source of baseload supply in areas without grid power as well as for railways, marine, mining and allied applications. Although the country’s power supply situation has improved considerably over the years and grid supply has reached most households under various central government schemes, diesel engines and gensets are still being used owing to growing urbanisation, digitalisation and the demand for uninterrupted quality power. Currently, the genset market in India is dominated by DG sets though with growing environmental consciousness, consumers are slowly moving towards gas-based gensets.

As per the Central Electricity Authority, the total diesel-based generating capacity of utilities across the country stood at 509.5 MW as of December 2019, accounting for 0.13 per cent of the total installed capacity. Tamil Nadu had the highest share at 212 MW, followed by Kerala (160 MW), Andaman & Nicobar (40 MW), Andhra Pradesh (37 MW), Manipur (36 MW) and Karnataka (25 MW). In addition, India Infrastructure Research has tracked over 2,300 MW of diesel/liquid fuel-fired captive power capacity across industries such as metals and minerals, petrochemicals, fertilisers, paper and pulp. These projects are in the range of 1-10 MW. Besides, small- and mid-sized gensets deployed across various consumer categories account for a significant share of the diesel-based capacity.

The DG set market size in the country was estimated at $1.02 billion in 2018-19, and is expected to grow to $1.9 billion by 2025. In terms of end use, the manufacturing segment accounts for a share of 26 per cent in the DG set market, followed by commercial at 23 per cent), residential (19 per cent), telecom (13 per cent, healthcare (11 per cent), and other segments (agriculture, defence, marine, mining, etc.) at 8 per cent. During fiscal 2019, the demand for DG sets is expected to have recorded single-digit growth owing to a slowdown in industrial activity and an overall decline in power demand.

In recent times, CNG-based DG set variants have been introduced to reduce harmful emissions. Manufacturers are also producing natural gas units that can meet the quick startup requirement of backup systems. The gas genset market is projected to grow at a CAGR of nearly 7.9 per cent during 2018-24. The need for compliance with environmental norms and the growing concerns regarding pollution are expected to drive demand for gas gensets. The expansion of gas pipeline infrastructure in the country would further give an impetus to the gas genset market in the coming years. In terms of ratings, the 100.1-350 kVA segment is expect to witness demand from commercial and industrial consumers during 2018-24.

The demand for gensets and engines is driven by a variety of segments – residential, commercial, industrial, railways, marine, building and construction, telecom and data centres. While high power deficit was a key factor driving the uptake of DG sets in the past, the need for quality and sustainable supply continues to drive demand.

In recent times, Indian Railways (IR) has emerged as a major demand segment for DG sets owing to its modernisation and refurbishment initiatives. Each power car has two DG sets. The annual industry volumes of DG sets stand at 500 units, with an expected market size of Rs 2 billion-Rs 2.5 billion in this segment. Further, with IR’s focus on electrification, the demand for diesel electric tower cars, which are used for installation and maintenance of overhead electric equipment, is also expected to increase.

Metro rail is also a key emerging demand segment for DG sets with the government likely to sanction metro projects for all town,/cities with a population of over 1 million. Each metro station will need DG sets as backup in case of a power failure. The typical DG sets used in a metro station are in the 500-1,000 kVA range.

The mining segment is another key consumer of diesel engines and DG sets, which are used to run high tonnage equipment. With the central government’s target to increase coal production to 1 billion tonnes by 2024, the demand for diesel engines is also expected to increase. Further, the demand for propulsion engines and gensets in the marine segment is likely to grow with the commencement of cargo movement on inland waterway routes and the growth of traffic on commercial marine routes.

Further, with the increasing digitalisation of the economy, the data centre segment is expected to grow, fuelling demand for DG sets. A large data centre uses as much electricity as a small town. Every data centre includes backup power supplies in the form of high horsepower DG sets. This power usually requires multiple DG sets of 750 kVA and above. The key sectors looking at putting up data centres are banking, financial services and insurance; social media; entertainment; ecommerce and telecom. 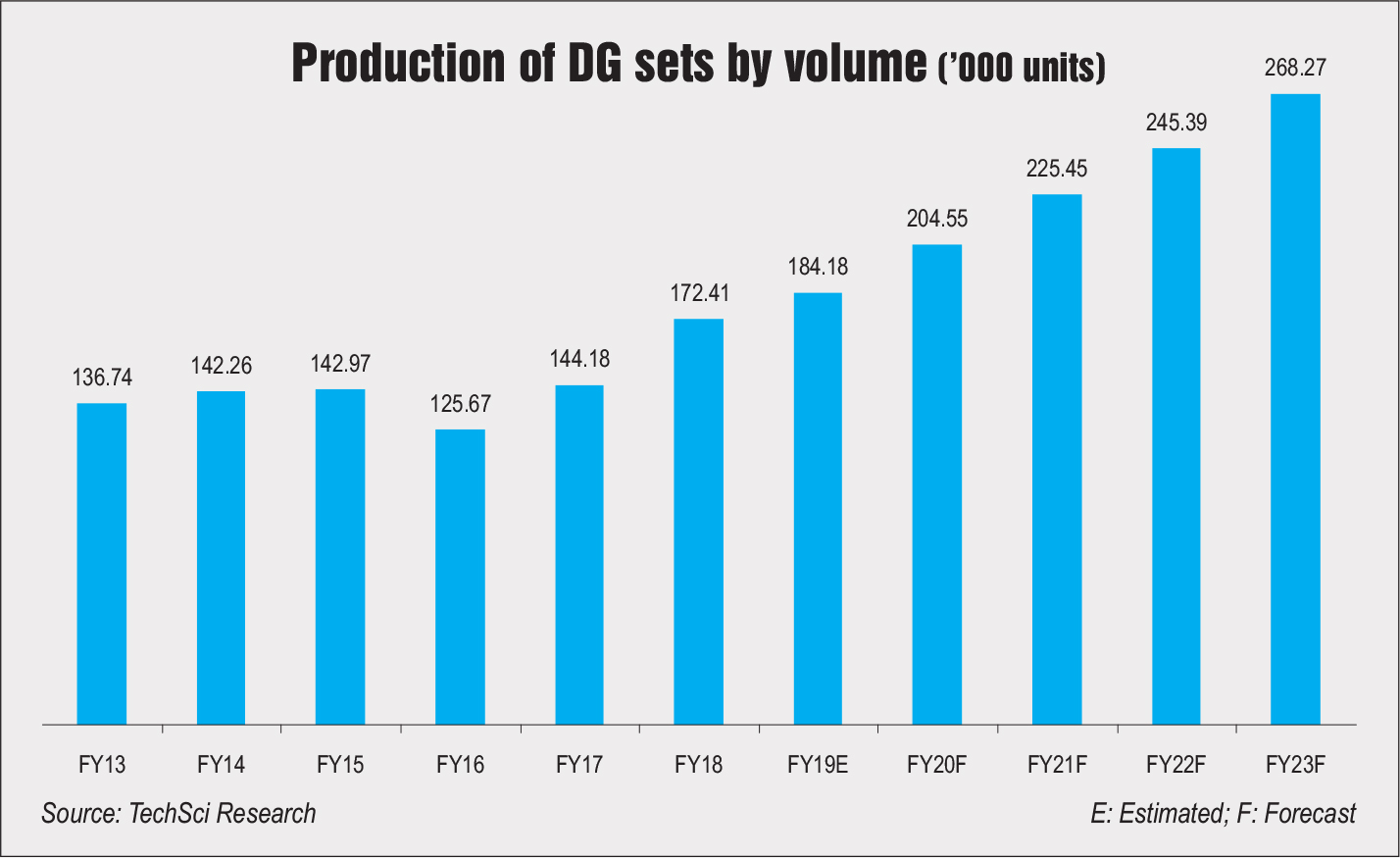 The diesel engine and DG set market has undergone a significant technology transition over the past few years due to the tightening of emission norms and customer requirements. For instance, mechanical controls have been replaced with electronically controlled technology for better fuel efficiency. Besides, generator manufacturers are producing gensets compliant with the central government regulations. The maximum permissible sound pressure level for gensets with a rated capacity of up to 800 kW was set at 75 dB(A) at a distance of 1 metre from the enclosure surface. The gensets should be provided with integral acoustic enclosures at the manufacturing stage itself. The noise norms came into effect on January 1, 2017. Further, the Central Pollution Control Board-II (CPCB-II) norms, which came into effect on April 1, 2014, have tightened emission limits for DG sets of up to 800 kW.

IoT-based smart/digital DG sets are being preferred by consumers owing to features such as remote monitoring of key parameters such as fuel level, fuel consumption, coolant level, engine temperature, abnormal noise level, power generated, capacity utilisation and running hours. Another growing trend is the deployment of containerised DG sets that offer benefits such as silent operation as per the strict acoustical standards, high temperature and weather resistance, and ease of maintenance.

Further, DG set manufacturers are investing in research and development (R&D) to make products that can run on alternative fuels such as biodiesel, biogas and methanol to curb pollution caused by diesel combustion. In addition, hybrid gensets that can run on a combination of resources such as wind, solar, biomass, small/micro hydro and fossil fuels are being commercialised. These hybrid gensets are typically equipped with batteries. With the cost of lithium ion batteries reducing rapidly, their adoption is expected to increase. Hybrid generators are particularly useful in places where access to fuels such as diesel and gas is difficult. Also, these generators are typically light and compact and offer ease of transportation.

The narrowing power deficit and aversion to diesel usage owing to rising emission concerns are the key threats to DG set manufacturers. Further, sluggish economic growth globally and changing demand patterns are resulting in demand volatility. That said, the industry is putting in R&D efforts to launch novel products and cater to new end-use segments. An uptick in industrial activity is likely to increase power demand and positively impact the diesel engine and genset market.