The Union Budget 2020-21, notified on February 1, 2020, has elicited mixed reactions from power sector stakeholders. The budget proposals for the sector largely focus on solar power, smart metering and emission reduction from thermal power plants (TPPs). While the budget acknowledged there is stress in the distribution segment, no big bang reforms were announced in this regard. Power Line presents a round-up of the budget announcements for the power sector…

The budgetary allocation for the Ministry of Power (MoP) for 2020-21 remained the same as the previous year at Rs 158.75 billion. Of this, 78 per cent is for central sector schemes, including the Integrated Power Development Scheme (IPDS) that received Rs 53 billion, the Deendayal Upadhyaya Gram Jyoti Yojana (Rs 45 billion), power system strengthening schemes, including smart grids, green energy corridors and other crucial transmission schemes (Rs 18 billion), and the Power System Development Fund and energy conservation schemes (Rs 6.8 billion). The budgetary allocation for the Ministry of New and Renewable Energy (MNRE) increased 48 per cent, from Rs 38.92 billion in 2019-20 to Rs 57.53 billion in 2020-21. Of this, about three-fourth is directed towards schemes that promote grid-interactive renewable energy, with solar and wind power securing an allocation of Rs 21.49 billion and Rs 12.99 billion respectively.

Further, the budgetary allocation for the Department of Atomic Energy increased by 4.6 per cent to Rs 182.29 billion in 2020-21 while that for the Ministry of Coal declined by 5.5 per cent to stand at Rs 8.83 billion. 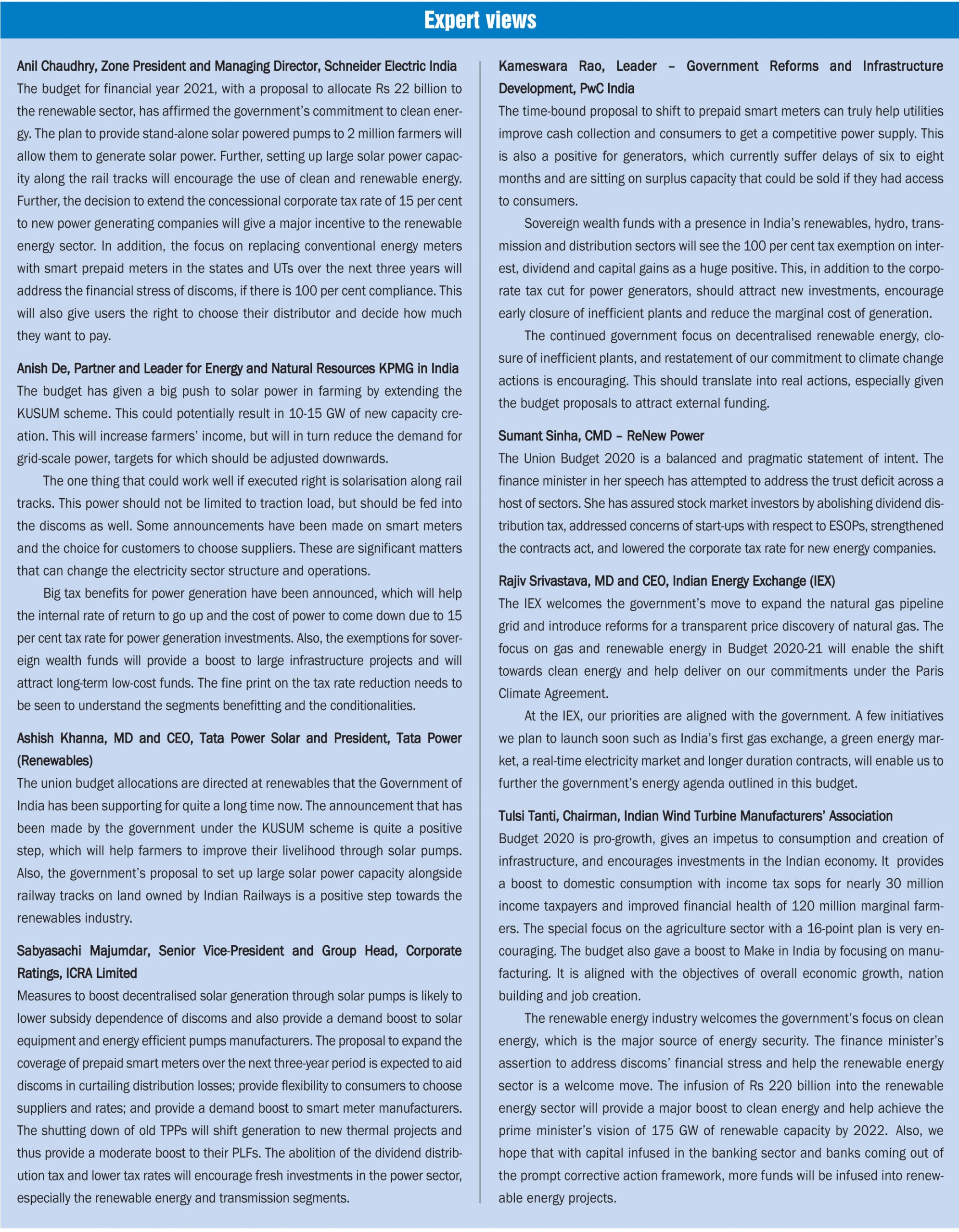 Corporate tax rate reduction: The Union Budget 2020-21 had certain key announcements for the power sector. Notable among these is the proposal to extend the concessional corporate tax rate of 15 per cent to new domestic companies engaged in electricity generation, provided they start generating electricity by March 31, 2023. The move is expected to help increase the internal rate of return for gencos and/or reduce the cost of power.

Tax sops to sovereign funds: Also, in order to attract investments in the priority sectors from foreign sovereign wealth funds, the budget has granted 100 per cent tax exemption to their interest, dividend and capital gains in respect of investment made in infrastructure and other priority sectors.

Smart metering: For the distribution segment, the budget lays emphasis on smart prepaid metering. In her speech, finance minister Nirmala Sitharaman said, “I urge all the states and union territories (UTs) to replace conventional energy meters with prepaid smart meters in the next three years. Also, this would give consumers the freedom to choose the supplier and rate as per their requirements. Further, measures to reform discoms would be taken.” Notably, the central government is already focusing on smart metering under various schemes such as the IPDS, the Smart Metering National Programme, and the National Smart Grid Mission but a three-year roadmap has not been notified by distribution utilities yet. Further, providing consumers the freedom to choose their suppliers through separation of carriage and content has been long pending, and the latest budget announcement gives hope that reforms to enable this provision might be announced soon.

Solarisation of pump sets: The Pradhan Mantri Kisan Urja Suraksha evam Utthaan Mahabhiyan (PM KUSUM) scheme will be expanded to provide stand-alone solar pumps to 2 million farmers and grid-connected pumps to 1.5 million farmers. The PM KUSUM scheme was launched last year with the aim of expanding decentralised solar generation by replacing agricultural pump sets with stand-alone and grid-connected solar water pumps. As per the MNRE, there are over 30 million agricultural pumps in the country of which 10 million are diesel based. The discoms have not been able to energise these pumps through electricity connections. The remaining 20 million grid-connected agricultural water pumps installed in the country account for over 17 per cent of the total annual electricity consumption. The latest budget has also proposed to launch a scheme to enable farmers to set up solar power capacity on their fallow/barren lands and sell surplus power to the discoms.

Solar capacity alongside rail tracks: There is also a proposal to set up solar projects alongside railway tracks on land owned by Indian Railways (IR). The proposal augurs well for meeting the country’s renewable energy targets as well as Indian Railways’ goal to transform into green railways. The energy generated by solar plants can be used for the electrification of the railway network. As of November 2019, 37,237 route km of rail lines have been commissioned on electric traction, which is about 58 per cent of the utility’s total broad gauge network. Indian Railways has also prepared an action plan to electrify the remaining broad gauge routes over the next three to four years. 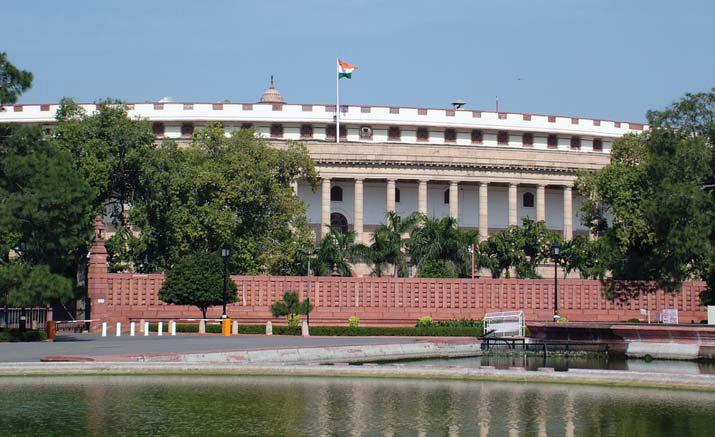 Shutdown of inefficient plants: The finance minister has advised utilities to shut down old TPPs that generate higher carbon emissions than the stipulated limit, and put the land so vacated to alternative use. This is in line with the government’s emission reduction targets submitted under the Paris Agreement 2016. The effective implementation of these targets will begin on January 1, 2021. The Central Electricity Authority has already notified a list of 103 plant units aggregating 25,572 MW, that are likely to retire during the 2022-27 period. Further, the states have been encouraged to implement plans for clean air in cities with a population of over 1 million. A budgetary allocation of Rs 44 billion has been announced for the same.

Net, net, the Union Budget 2020-21 has largely delivered on expected lines, though there were no new policy announcements in the areas of distribution reform, stressed generation assets and e-mobility.