The Bureau of Energy Efficiency (BEE) launched the “perform, achieve and trade” (PAT) scheme in 2012, under the National Mission on Enhanced Energy Efficiency, to enhance the efficiency of energy-intensive sectors in the country. PAT is a regulatory instrument aimed at reducing the specific energy consumption in energy-intensive industries and creating a market-based mechanism by converting these energy savings into tradable instruments, energy saving certificates (ESCerts), to increase the overall cost-effectiveness.

PAT is a multi-cycle scheme, with each cycle spanning over a period of three years. The first cycle began in 2012 and concluded in 2015. Up to April 2019, four cycles of PAT are in progress, consisting of 956 designated consumers (DCs) from 13 energy-intensive sectors. By 2020, BEE expects that about 11 metric tonnes of oil equivalent (mtoe) of energy savings will be achieved through the implementation of the PAT scheme. 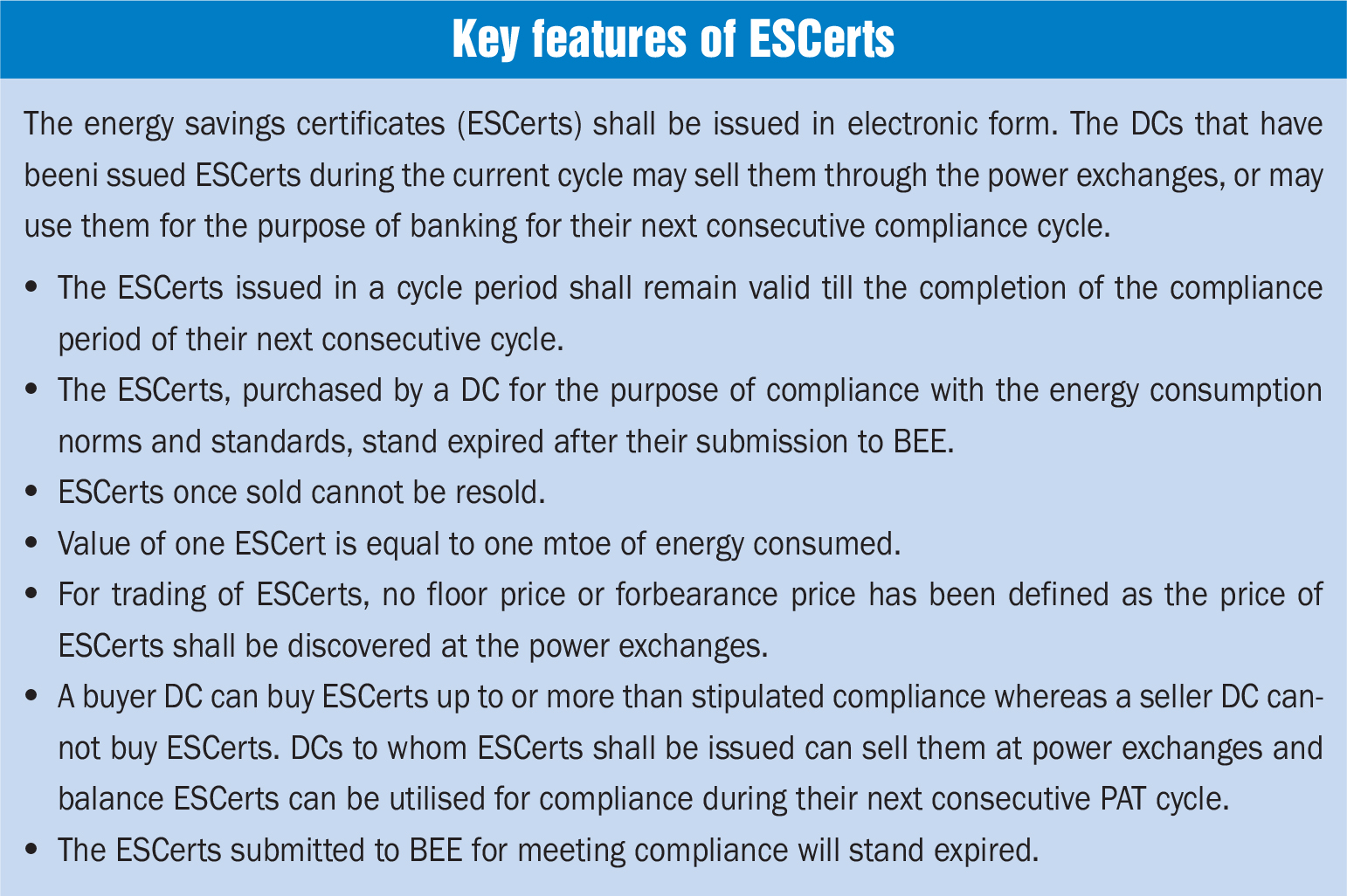 The first PAT cycle (2012-13 to 2014-15) led to energy savings of 8.67 mtoe, which is about 30 per cent more than notified targets. This cycle covered 478 industrial units across eight sectors (aluminium, cement, chlor-alkali, fertilisers, iron and steel, paper and pulp, thermal power plants and textiles). Under the first cycle, a target of 4.05 per cent reduction in energy consumption, amounting to a total of 6.686 mtoe, was set for these industries.

Subsequently, the second cycle of PAT (2016-19) was notified in March 2016, covering 621 DCs from 11 sectors, including eight existing sectors and three new sectors (railways, refineries and discoms). PAT, in its second cycle, seeks to achieve an overall energy consumption target of 8.869 mtoe. PAT cycle II ended in March 2019 and the verification of energy savings achieved by DCs is under process by auditors empanelled by BEE.

The third cycle of PAT was notified in March 2017, which aims to achieve energy consumption reduction of 1.06 mtoe with 116 DCs notified from six sectors. The fourth cycle of PAT commenced in April 2018, which aimed to save about 0.7 mtoe of energy with a participation of 109 DCs. In this cycle, two new sectors, petrochemicals and commercial buildings (hotels), were included.

The fifth cycle of PAT commenced in April 2019. Under this cycle, 110 DCs from the existing sectors of PAT, that is, aluminium, cement, chlor-alkali, commercial buildings (hotels), iron and steel, pulp and paper, textiles and thermal power plants have been notified. The total energy consumption of these DCs works out to be 15.244 mtoe and the energy saving target in this cycle is expected to be 0.513 mtoe. 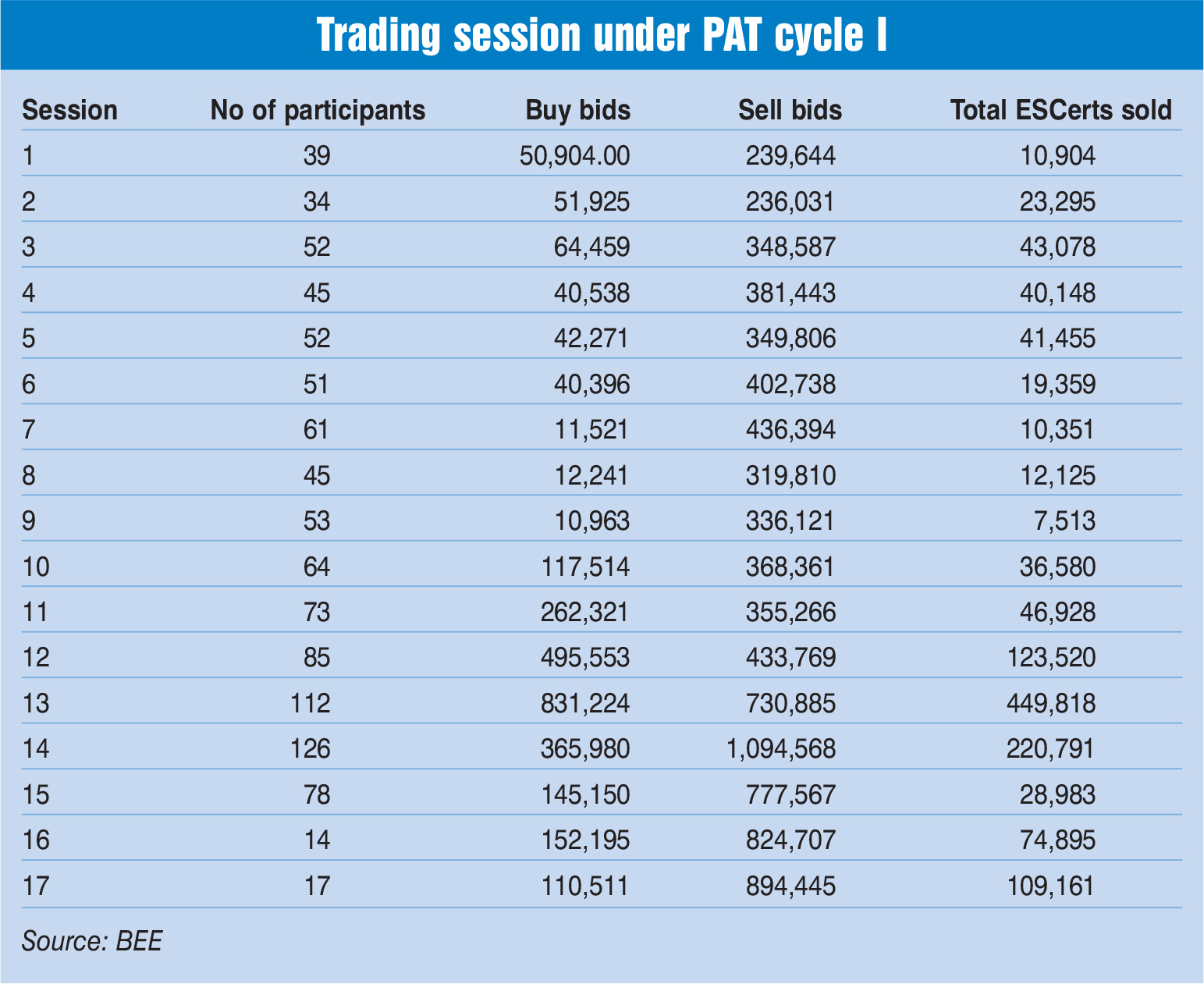 While the performance of PAT under the first cycle was much lauded, the industry has raised concerns regarding the modest targets and low level of penalties. In addition, the consumers are facing challenges in terms of shutdowns due to external factors, low capacity utilisation, addition of new line/unit (in process industries and power generation), poor fuel and raw material quality. All these are affecting their performance. Apart from addressing these issues, there is a need to implement a more stringent enforcement mechanism in order to achieve the desired results.

Further, the PAT scheme currently covers DCs, which account for about only half of the industrial energy consumption. There is a need to scale up the programme to cover at least 80 per cent of the industrial energy consumption. This may be done by widening the scope of the scheme and including more sectors such as transport, aviation and shipping. A voluntary PAT programme can also be initiated for consumers not identified under the scheme. The non-DC participants can be allowed to access the ESCerts market. They may also be provided favourable tax benefits for enhancing the energy efficiency levels in the sector.