As per a recent research report, energy consumption by electric vehicles (EVs) would account for 3 per cent of India’s total power demand by 2030. Thus, the transition towards electric mobility offers India not only an opportunity to improve energy efficiency and transform the transport sector, but also addresses concerns regarding energy security. In addition, demand from EVs could greatly improve the utilisation factor of power plants, as the charging pattern of EV users will coincide with the non-peak power demand in India.

EVs can also complement the intermittent nature of renewable power by absorbing power during off-peak hours. Further, EV batteries can serve as distributed generation resources (DER) and power storage systems, thus improving grid resilience. The new ecosystem also offers India the opportunity to become a leader in domestic manufacturing and create jobs. There is immense scope for growth as electric mobility is still at a nascent stage in the country compared to many advanced markets around the globe.

The government aims to have up to 40 per cent all-electric cars on the roads by 2030. Reportedly, it is planning to spend around Rs 400,000 million between 2020-21 and 2029-30 on benefits and subsidies, including loans, tax breaks, rebates and assorted benefits, give an impetus to the sector. However, the Indian EV initiative is highly dependent on the availability of strong charging infrastructure. According to the Society of Indian Automobile Manufacturers, it may not be possible to achieve India’s EV target if this issue is not addressed. Already, Toyota has reportedly stopped the manufacturing of electric and hybrid cars for the Indian market due to inadequate charging infrastructure.

Taking up the challenge, many companies have been moving towards setting up EV charging infrastructure. Private major Tata Power’s solutions include power supply, back-end power supply infrastructure and customised EV charging solutions, including smart charging with Tata Power Mobiles, last-mile charging, and battery swapping for two/ three-wheelers and across different EV categories and manufacturers. It established the first set of EV charging stations in Mumbai, followed by Delhi and Hyderabad. It has partnered with Tata Motors Limited to set up around 300 EV charging stations by the end of 2020-21, at the latter’s dealerships, some Tata Group retail outlets and other public places. It has also signed an MoU with Hindustan Petroleum Corporation Limited (HPCL) for setting up commercial-scale charging stations at HPCL’s retail outlets and other locations across India. It has tied up with car rental company Zoomcar to switch to EVs. Tata Power Delhi Distribution Limited (TPDDL) has announced that initially, 12 EVs of Zoomcar will be used for operations and maintenance activities, including the installation of smart meters in North Delhi. Meanwhile, it has partnered with Jaguar Land Rover to provide end-to-end EV charging solutions across its retail network of 27 outlets in 24 cities, as well as at customers’ residences and offices.

Among other initiatives, Delhi’s private discom BSES has entered into partnerships with many technology firms to set up over 150 smart EV charging stations (Blue Smart Charger) across its licensed area. Launched in South Delhi, the charging station can charge two EVs simultaneously and has been set up in partnership with BSES Rajdhani Power Limited, Gensol Charge and Techperspect. The charging station is equipped with a platform to help locate the nearest EV charging station, make advance online bookings, pay online through multiple options.

The total cost of charging, including the cost of electricity and overheads (parking charges, recovery of equipment cost, etc.), is expected to be Rs 160-Rs 200 for a full charge. This translates into Rs 1.60-Rs 1.80 per km, which is competitive with the price of petrol, diesel and even CNG vehicles, as per the company. Earlier, BSES had signed an MoU with Ola Electric to set up battery swapping and charging stations in parts of New Delhi.

Meanwhile, Japanese major Panasonic is planning a mega EV charging grid across the top 25 Indian cities, looking to set up 100,000 charging stations and telematic solutions by 2024 to power over a million vehicles. The company is already a key partner (battery cell supplier) of American EV maker Tesla. In November 2019, MG Motor set up its first EV fast charging station at Gurugram, a few weeks ahead of the planned launch of the company’s first EV in India, MG ZS. In July 2019, MG Motor entered into a partnership with cleantech company Fortum Charge to install fast charging stations for EVs across India, including NCR, Hyderabad, Mumbai, Bengaluru and Ahmedabad.

In another development, start-up EV Motors has partnered with ABB and Delta to install over 6,500 charging outlets across cities, businesses and residential complexes of India over the next five years, with an estimated investment requirement of around Rs 14 billion. The first public EV charging outlet, PlugNgo, will be connected to cloud-based integrated software.

Recently, Fourth Partner Energy and Lithium Urban Technologies also announced their partnership to build solar-powered charging infrastructure across the country. The joint venture (JV), ShuchiAnantVirya (SAV), has launched its first EV charging hub in Gurugram, which can charge 25-30 cars at the same time. Each of the parties has committed about Rs 100 million towards this JV. SAV plans to establish 10-15 charging hubs across metros such as Hyderabad, Bengaluru and Mumbai in the next three years. The second facility in Pune has been commissioned, which will be India’s largest EV charging hub for four-wheelers.

In an innovative initiative, Magenta Power has announced its plans to roll out India’s first street lamp-integrated EV charger by mid-2020. In the first stage, EV chargers, named ChargeGrid Flare, would be installed at HPCL’s retail outlets in major cities all over India. The charger has been designed in partnership with HPCL, which also supports the start-up.

Battery swapping technology offers the best substitute to slow EV charging and helps drivers  make optimum use of operational hours. The demand for EV battery swapping is growing in India, as per a new report by market research and consulting services firm P&S Intelligence. The market is expected to be flooded with electric three-wheelers as these vehicles are used as passenger carriers and run for more than 100 km a day on average. Since with each full charge these vehicles run less than 100 km, they are required to be charged twice or thrice a day.

The report shows that the pay-per-use category is expected to hold the larger share in the Indian EV battery swapping market from 2020-21 onwards. This can be attributed to the preference of the vehicle drivers to pay as per their usage, due to lack of a fixed usage pattern. For instance, electric two-wheeler riders do not require much battery swaps for running short distances and thus, are expected to opt for the pay-per-use model. As per the P&S report, to gain a competitive edge over other players in the market, Indian EV battery swapping service providers can partner with vehicle manufacturers, battery manufacturers and utility providers, target electric autos and electric buses, and expand in cities where battery swapping services would be profitable.

The ACME Group, a leading solar power developer and energy storage solutions provider in India, launched India’s first battery swapping and EV charging station, EcoCharge, in 2017. It provided these stations to Ola for a pilot project in Nagpur City, in which 200 EVs, including buses, autos and cars. ACME also offers lithium batteries for electric mobility and stationary applications, manufactured at its facility in Rudrapur, Uttarakhand.

For billing charging point operators (CPOs), a smart meter is installed at the point of connection. As per a study by the Bureau of Energy Efficiency (BEE) and EY, the various models of charging systems adopted in mature markets are:

Before the EV charging infrastructure is set up, the following assessments are required. First, there is a need to understand the availability of the dominant modes of transport in a city and conduct an assessment to prepare a transition plan for the shift to EVs. In order to reduce vehicular emissions, GIS assessment and mapping can help identify routes with the highest commutation and distances between these routes. Further, for city-level implementation of electric buses, the existing design of the transportation network needs to be analysed in order to introduce suitable alterations to the existing routes and planning methodologies. It is crucial to first assess the number of buses plying in and around the city, the number of bus depots available, route plan/schedule, the average number of trips on routes of highest commutation, the average distance between depots, the average number of buses parked in a depot, availability of space in depots for setting up charging stations for e-buses, and IT and automation infrastructure for metering, billing and data related to utilisation and handling of electric buses. 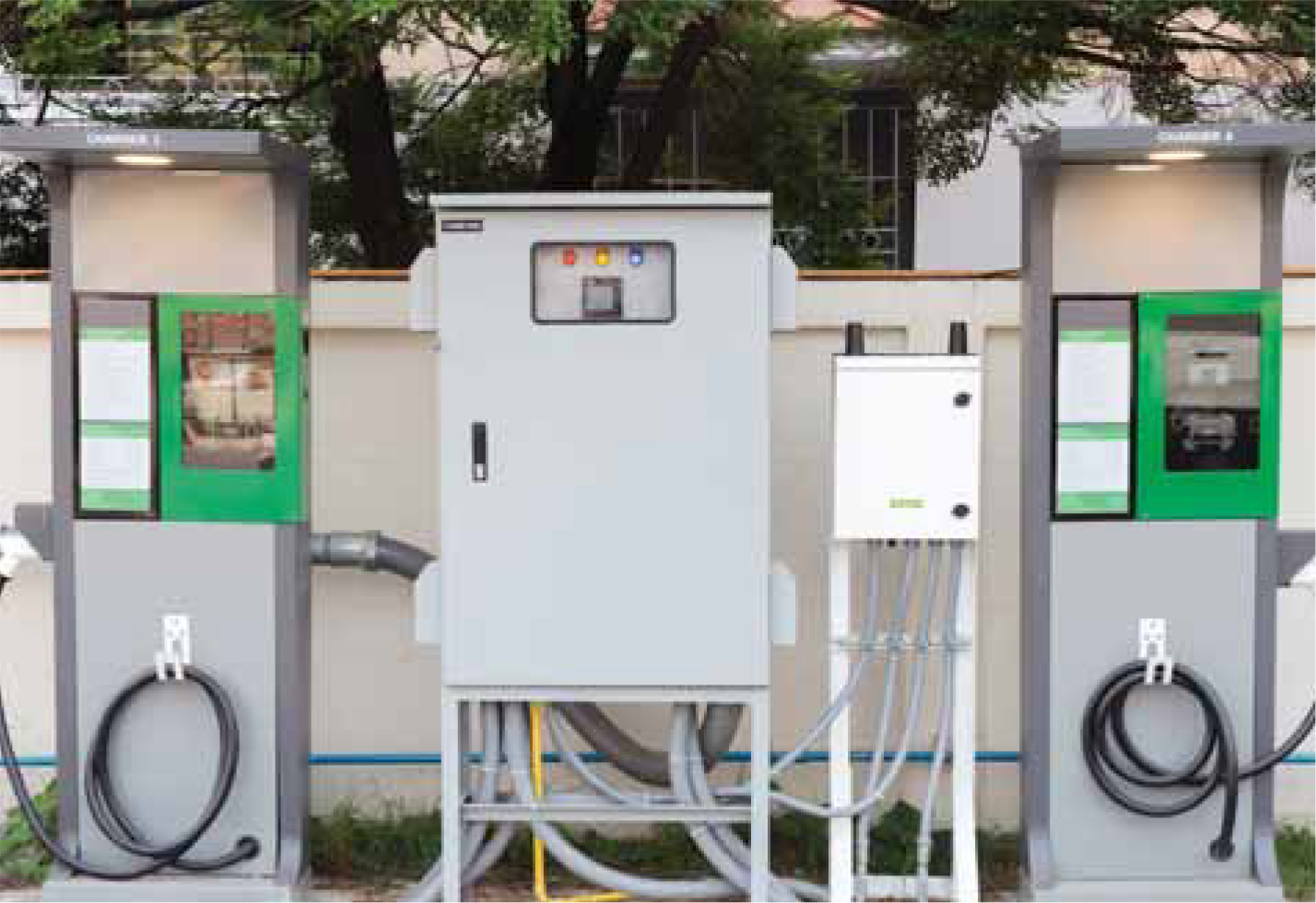 The BEE, in consultation with the MoP, studied the techno-commercial challenges in the proliferation of EV charging infrastructure. It concluded that charging infrastructure (both fast and slow) needs to come first to ensure a smooth transition for end users, especially when range anxiety and charging time are considered major barriers to adoption.

As per the study, the government should focus on both fiscal and non-fiscal impediments. The initial deployment of charging infrastructure should not be seen from the lens of profit generation, but rather as an opportunity to build a market and get customers accustomed to the e-mobility ecosystem. The government should consider providing financial and non-financial incentives to CPOs to encourage charging infrastructure deployment at the central, state and city levels. Early adopters are expected to be from urban ecosystems, with major sales coming from metro cities owing to mass mobility requirements and considerably high disposable income levels. In a zero-subsidy scenario, the government may consider providing tax rebates and tax holidays, and low GST on EVs, charging stations and associated components, and services rendered by charging infrastructure operators. A special tariff category with time-of-use tariff for residential chargers and blended tariff for public chargers is recommended. Non-fiscal measures such as exemption of permit fee, free parking spots and toll exemption may be adopted. For ensuring viable and sustainable business models, states may consider facilitating access to land at a subsidised price for the initial years to agencies interested in setting up EV charging infrastructure.

Net, net, EV players should partner with the right companies to set up the infrastructure and increase the adoption of EVs. This initial investment will pay dividends in the long term when the widespread adoption of EVs starts.

India’s commitment to its climate goals is reflected by the notable actions being taken for transition to a low-carbon economy. After announcing massive renewable energy targets, the country has set yet another  ambitious target – […]

Technological advancements and innovations are transforming the electricity distribution landscape of utilities across the world. This is being driven mainly by the rapid electrification of sectors like transportation, expansion of decentralised generation with the declining […]