Nuclear power contributes roughly around 3 per cent of India’s total power generation and less than 2 per cent of installed capacity. Despite starting operations in 1969, the nuclear power segment has failed to take off significantly in India. To meet its commitment under the Paris agreement, India is aiming for 40 per cent of its installed capacity to be based on non-fossil sources such as nuclear, hydro and renewables by 2030. The government has set an ambitious target to increase India’s nuclear capacity from 6.7 GW at present to 22.4 GW by 2031. An overview of the nuclear power segment in the country… 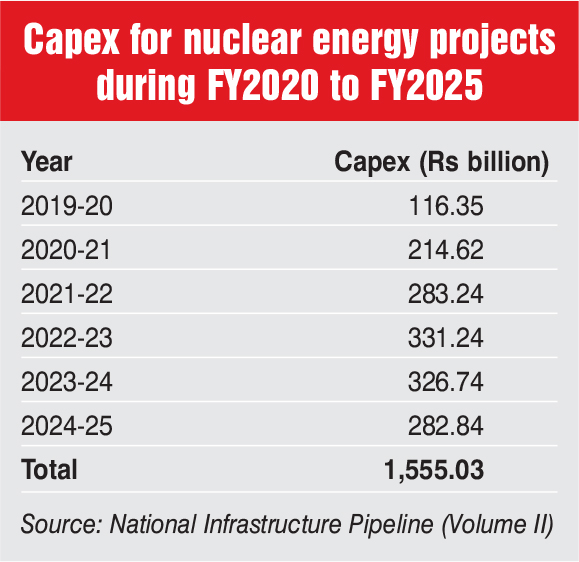 Currently, a total of nine nuclear power reactors with an aggregate capacity of 6,700 MW are under construction. These are Units 7 and 8 of the Rajasthan Atomic Power Station (2×700 MW) at Rawatbhata, Units 3 and 4 of the Kakrapar Atomic Power Station (2×700 MW) in Gujarat, Units 3 and 4 of the Kudankulam Nuclear Power Station (2×1,000 MW) in Tamil Nadu, Units 1 and 2 of the Gorakhpur Haryana AnuVidyutPariyojna (GHAVP) (2×700 MW) in Haryana, and a 500 MW prototype fast breeder reactor at Kalpakkam, Tamil Nadu, being implemented by BHAVINI, a PSU of the Department of Atomic Energy.

In addition, the government has granted administrative approval and financial sanction for setting up 12 more nuclear power reactors with a total capacity of 9,000 MW. These are Units 1 and 2 at Chutka, the Madhya Pradesh (2×700 MW), Units 5 and 6 at Kaiga in Karnataka (2×700 MW), Units 1, 2, 3 and 4 at MahiBanswara in Rajasthan (4×700 MW), Units 3 and 4 of the GHAVP in Haryana (2×700 MW), and Units 5 and 6 of the Kudankulam Nuclear Power Station in Tamil Nadu (2×1,000 MW). Of these, one of the marquee projects identified by the government is the Kudankulam Nuclear Power Project Units 3, 4, 5 and 6, which are being built at an estimated total project cost of Rs 894.7 billion and are expected to be completed by December 2025.

Outlook and the way forward

Nuclear power development in India has suffered multiple setbacks in recent years due to strong public opposition, liability issues and the interpretation of the Civil Liability Nuclear Damage Act by foreign and domestic suppliers. Going forward, the risk perception of suppliers will determine future development in the sector.