Adani Power Limited (APL) has emerged as the country’s largest private sector thermal power producer in less than 15 years. The company, which ventured into power generation in 2006 with its Mundra thermal power plant (TPP) in Gujarat, has expanded its footprint across the entire power value chain with a generation capacity of 12.45 GW.

In recent years, it has rapidly increased thermal capacity through a series of value accretive acquisitions. The latest feather in its cap is the acquisition of 49 per cent stake held by the US-based AES Corporation in the state-owned Odisha Power Generation Corporation (OPGC), which has a capacity of 1.7 GW. Prior to this, the company acquired GMR Chhattisgarh Energy Limited (GCEL) as well as Korba West Power Company Limited (KWPCL) with a combined operational capacity of nearly 1.9 GW. In another key development, the company has signed a 25-year power purchase agreement (PPA) with the Madhya Pradesh government, ending a five-year lull in the signing of long-term contracts in the thermal power segment.

The acquisition of the Raipur and Raigarh TPPs was completed in 2019-20. For the 1,370 MW Raipur project, APL acquired a 52.38 per cent equity stake in GCEL from a consortium of lenders and the balance 47.62 per cent equity stake was acquired from the GMR Group. The acquisition of GCEL was concluded in August 2019 at an enterprise value of around Rs 35.3 billion. Post acquisition, the asset is under Raipur Energen Limited (REL). For the 600 MW Rajgarh project, APL completed the acquisition of KWPCL under the Insolvency and Bankruptcy Code in July 2019 at an enterprise value of about Rs 10.04 billion. The project is linked with a 2.315 million tonnes per annum (mtpa) long-term fuel supply agreement (FSA) with Coal India Limited. KWPCL is now renamed Raigarh Energy Generation Limited (REGL).

The company’s flagship project, the 4,620 MW Mundra TPP located in Kutch district, is one of the largest single-location projects in the world. It was commissioned in phases during 2009-12. It comprises four 330 MW subcritical units and five 660 MW supercritical units. The project has several firsts to its credit. Unit 1 (660 MW) of the project was the first supercritical generating unit to be commissioned in the country and was completed in a record time of 36 months from inception to synchronisation. The TPP is also the first in the country to be registered under the clean development mechanism of the United Nations Framework Convention on Climate Change. However, the project, which meets part of its coal requirement via imports from Indonesia, ran into trouble following a hike in Indonesian coal prices in 2010 leading to under-recovery of fuel costs. After years of litigation at the Central Electricity Regulatory Commission (CERC), Appellate Tribunal for Electricity (APTEL) and the Supreme Court as well as intervention by the Gujarat government’s high-powered committee, in April 2019, the CERC approved the revised PPA pass-through of the increased cost of imported coal for the Mundra TPP, providing the much-needed relief to the company. In addition, the company operates the 40 MW Bitta solar power project in Kutch, for which it has signed a PPA with Gujarat UrjaVikas Nigam Limited.

The company recently expanded its thermal portfolio by signing a definitive agreement in June 2020 to acquire a 49 per cent stake in OPGC from the AES Corporation for $135 million. The company will acquire a total of 8.9 million equity shares in OPGC, representing 49 per cent of OPGC’s total issued, paid-up and subscribed equity share capital. The plant has a long-term PPA for 25 years with state-owned offtaker GRIDCO and sources fuel from a nearby captive mine. The Odisha government holds the balance 51 per cent stake in OPGC. The transaction is subject to compliance with certain applicable requirements and regulatory approvals from the Competition Commission of India and the Reserve Bank of India. The acquisition is expected to be completed in December 2020.

The company is developing the 1,600 MW (2×800) Godda ultra supercritical TPP in Jharkhand with an estimated investment of Rs 148 billion. The project is being implemented by Adani Power (Jharkhand) Limited (APJL) for the export of power to the Bangladesh Power Development Board (BPDB). APJL had signed a 25-year long-term PPA with BPDB in November 2017, for the supply of 1,496 MW of power from the Godda plant. The company has also achieved financial closure of projects by tying up debt financing with a consortium of lenders including REC Limited and PFC. REC and PFC have sanctioned a rupee term loan facility of Rs 100.75 billion in the ratio of 50:50. As of March 31, 2020, APJL has drawn Rs 21.09 billion under this facility. The land acquisition for the project has been completed and an engineering, procurement, construction (EPC) contract has been awarded to a consortium led by SEPCOIII, a subsidiary of POWERCHINA. The company expects to commission the first and second units of the project by January 2022 and May 2022 respectively; however, some delays might be expected due to disruption in work post the Covid-19 lockdown.

In addition, the company is considering brownfield expansion at a few of its existing projects as well as the development of greenfield TPPs. These include the 1,320 MW (2×660) Pench supercritical TPP in Madhya Pradesh, the 1,600 MW (2×800) Kawai Expansion TPP, the 1,600 MW (2×800) Udupi Expansion TPP and the 2,600 MW (4×660) Dahej TPP in Gujarat. All projects will be based on supercritical technology. 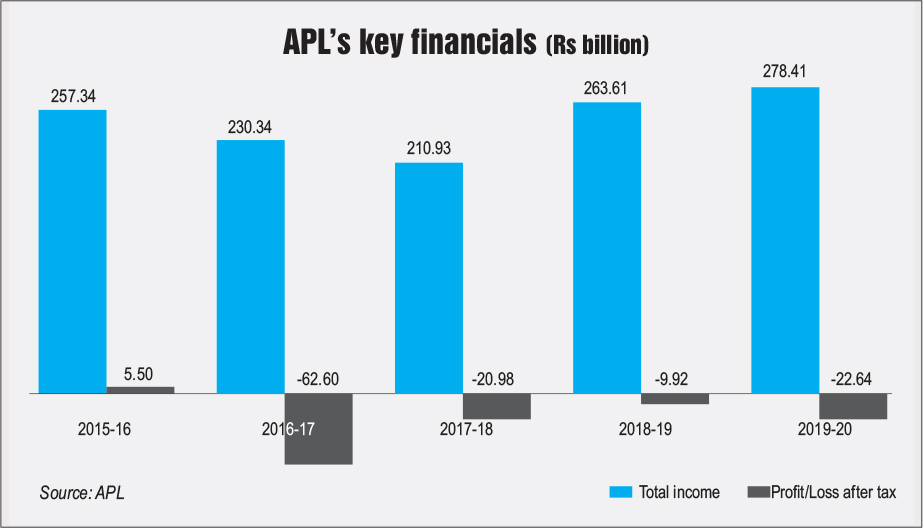 Further, the company’s board has recently approved the proposal to delist company shares from the stock exchanges. APL has proposed a floor price of Rs 33.82 per share to buy 9.65 million equity shares available with public shareholders for about Rs 32.64 billion. The promoter group collectively holds 74.97 per cent of the paid-up equity share capital in the company, whereas public shareholders own 25.03 per cent. As per an official statement, the objective of the delisting proposal is to enable the promoter group to obtain full ownership of the company and provide enhanced operational flexibility. Given that valuations in the stock market are depressed in current times, it is an attractive opportunity for promoters to make the companies private, providing them greater leeway to restructure or turn around businesses. 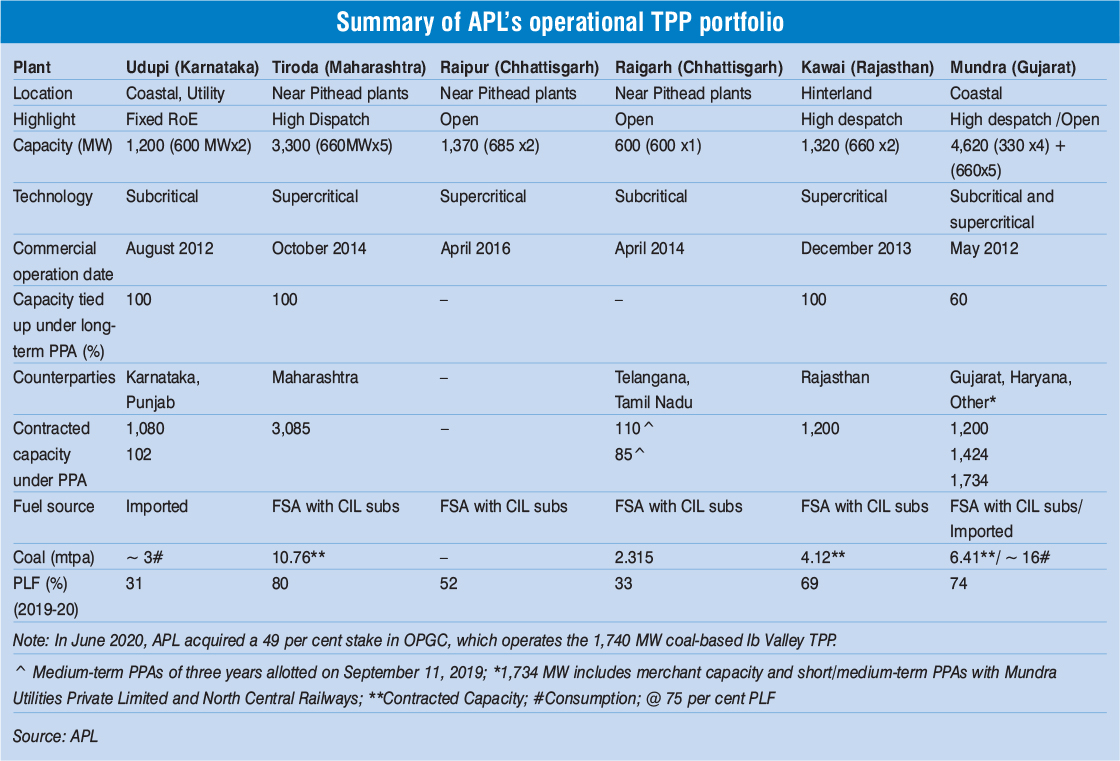 The immediate challenge for the company is the impact of Covid-19 on power demand and the economy. Discoms are facing liquidity crisis and payments to gencos are faltering. This poses a risk to APL since a major part of its capacity is tied up with state-owned discoms. In addition, the lockdown has affected work at its Godda under-construction project, but the company is confident of meeting project targets in a timely manner. Further, regulatory processes such as compensation for change in law events and realisation of compensatory tariffs take a significant amount of time and subject the company to cash flow mismatches. Also, a part of the company’s capacity that is untied is subject to pricing fluctuations in the spot market.

That said, despite the Covid-19 impact, APL has been able to ensure uninterrupted electricity supply from its generating units in a seamless manner and it expects that power demand will rebound in the near term. In its latest annual report, GautamAdani, chairman, Adani Group, remarked, “While we are looking at disruption in economic activity caused by the impact of an prolonged lockdown in the post Covid-19 world, the realisation that our nation must grasp an emerging, one-time opportunity to strengthen its industrial base by increasing its reliance on domestic manufacturing and attracting investments in export-oriented, high-value-added sectors could be a potential game changer in accelerating power demand.”

Going forward, APL is developing a digital transformation roadmap to leverage technology to streamline its business processes and asset management. The company also continues to be on the lookout for generation assets for acquisition to further enhance its generation footprint. Overall, APL is bullish about power demand growth in the coming years and aspires to be an integral part of the sector.