Coal-based thermal power stations have been operating for decades in India but the concept of developing environment-friendly solutions for fly ash utilisation has picked up in recent years owing to stringent environment regulations. The effective utilisation of fly ash across industries is the key to achieving the country’s sustainable development goals. Fly ash is used across industries for various purposes such as the construction of roads/highways/flyovers, the reclamation of low-lying areas, backfilling and stowing of mines, wasteland development and the production of portland cement concrete (PCC).

The cement industry is the largest consumer of fly ash in India. Fly ash can be used as prime material in many cement-based products such as poured concrete, concrete blocks and bricks. One of the most common uses of fly ash is PCC manufacturing. Road construction projects using PCC in place of ordinary portland cement can reap significant economic benefits. The addition of fly ash to the concrete mix can provide durability to reinforced structures such as buildings and bridges. The use of fly ash in cement concrete improves workability and impermeability, increases resistance to moisture and harmful gases, and strengthens the concrete mass. Fly ash generates considerably less heat, thereby preventing thermal cracking and premature deterioration of the structure. It provides the same strength as cement. The use of fly ash in cement concrete reduces the requirement of cement and raw materials (such as limestone and coal), thus lowering its associated costs. Since fly ash can displace cement to a certain extent, it has the potential to eliminate greenhouse gas emissions.

During the first half of 2019-20, around 10.17 mt of fly ash was used for making bricks for construction purposes. Fly ash bricks are increasingly being preferred for modern construction and have three times more strength than conventional bricks. These bricks serve as an environment-friendly building product as they are less energy intensive compared to clay bricks and require less mortar in brickwork. In February 2019, a new fly ash draft notification was issued. It stated that no new red clay brick kilns will be installed and operated within 300 km from a coal- or lignite-based thermal power plant after the publication of this notification. The existing red clay brick kilns located within 300 km will be converted into fly ash-based brick or tile manufacturing units within one year from the date of publication of this notification. In order to encourage the conversion, thermal power plants (TPPs) should provide fly ash at the rate of Re 1 per tonne and bear the full transportation cost up to 300 km to such units.

Thermal power gencos are taking steps in manufacturing fly ash bricks. For instance, during 2019-20, NTPC’s stations produced about 45.4 million fly ash bricks, which were utilised for constructing certain areas of power plants, townships as well as ash dykes. In fact, NTPC townships at Simhadri, Sipat, Faridabad and Talcher-Kaniha have been constructed exclusively with fly ash bricks. In addition, NTPC has set up an ash park depot in Varanasi to provide dry fly ash to manufacturers of ash bricks, tiles, blocks, etc.

Construction of roads and embankments 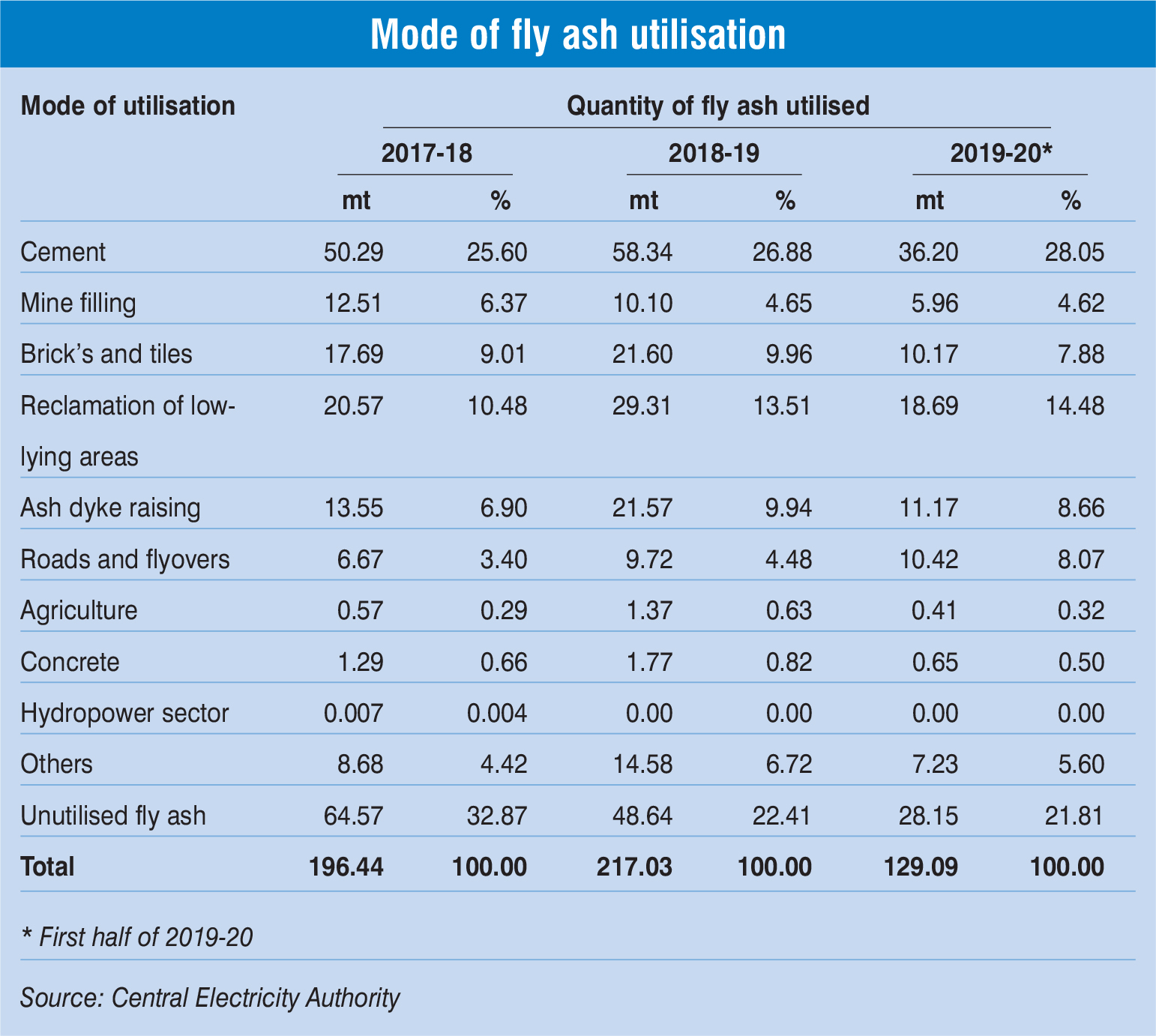 Fly ash is being used in the reclamation of abandoned coal mine voids. This is one of the areas where a large quantity of ash produced by pithead and remotely located power plants can be utilised on a sustainable basis. Huge sizes of pits created due to coal mining can be converted into land which can be developed further for afforestation and other useful purposes. However, the present utilisation is limited to about 5.96 mt only (April-September 2019). To avoid subsequent ground stability problems such as land subsidence, backfilling of mine voids is mandatory. Traditionally, mill tailings and river sand have been used extensively in the country as mine backfilling materials. However, stringent regulations, unsustainable sand mining practices, and unavailability of river sand have created problems for the mining industry. Fly ash has emerged as an alternative material in response to these challenges. It also helps in the conservation of topsoil and river sand.

Fly ash is also used as a soil conditioner in agriculture as it helps increase the production of crops. A recent amendment to the fly ash notification states that the Ministry of Agriculture and Farmers’ Welfare may consider promoting fly ash in farming activities. Fly ash utilisation in agriculture offers cost savings in the form of reduced use of chemical fertilisers and works as a nutrient supplement for degraded soils. However, despite these benefits, the current fly ash utilisation levels in the agricultural sector are quite low. Other areas of fly ash utilisation include ash dyke raising, civil works in hydroelectric plants, and reclamation of low-lying areas.

While the use of fly ash has increased in recent years, 100 per cent utilisation is still a long way away. Technological advancement is needed to ensure that dry fly ash collection, storage and disposal facilities are developed so that fly ash can be made available to users in dry form. Going forward, power gencos will need to step up their efforts to ensure complete utilisation of fly ash in order to reduce environmental damage.