Indian coal is characterised by high ash content, which is in the range of 30-45 per cent. During power generation, coal-based power plants in the country generate a huge quantum of ash, which is one of the major sources of air and water pollution. The Ministry of Environment, Forest and Climate Change (MoEFCC) had mandated 100 per cent fly ash utilisation by thermal power plants (TPPs) by the end of December 2017. However, ash utilisation levels continue to be low at around 80 per cent.

The MoEFCC issued the first directive for promoting fly ash utilisation in the country in September 1999. It has been amended from time to time. In the latest amendment, notified in January 2016, the ministry mandated 100 per cent fly ash utilisation by TPPs by the end of December 2017. In addition, it specified that power plant developers will bear the entire cost of ash transportation up to a 100 km radius. For distances of more than 100 km and up to 300 km, the developer will share the cost of ash transportation equally with the user or the construction agency. Further, it directed TPPs to set up or assist in setting up manufacturing facilities for ash-based products on their premises so as to minimise the transportation of fly ash. The notification also suggested making use of fly ash-based products for all government schemes such as the PradhanMantri Gram SadakYojana, the Mahatma Gandhi National Rural Employment Guarantee Scheme and the Swachh Bharat Abhiyan. It advised the Ministry of Agriculture and Farmers’ Welfare to consider using fly ash as a soil conditioner.

Despite various efforts and mandates by the government, the majority of TPPs have not been able to comply with the 100 per cent fly ash disposal target. The states had sought time extension of two to five years to meet the 100 per cent utilisation target. However, their request was rejected by the National Green Tribunal as any extension in time would have conflicted with the mandate under the Environment (Protection) Act, 1986, particularly when such an extension could harm the environment. Recently, in February 2020, the National Green Tribunal directed TPPs to take prompt action for the scientific disposal of fly ash, warning that failure to do so would entail a penalty. The tribunal stated that non-compliant plants will have to pay environmental compensation, effective from the cut-off date of December 31, 2017.

In May 2020, the MoEFCC amended the Environment Protection Act, 1986 to do away with mandatory coal washing for supply to TPPs. The notification allows the use of coal by TPPs without stipulations regarding the ash content or location distance, subject to certain conditions. Earlier, power stations located within 500-1,000 km were stipulated to use coal with ash content not exceeding 34 per cent on a quarterly average basis. Regarding the management of ash ponds, as per the new rules, TPPs will comply with the conditions of the fly ash notification, issued from time to time, without being entitled to an additional capacity of fly ash pond (for existing power generation capacity) on ground for switching from washed coal to unwashed coal. Further, TPPs will dispose of fly ash in abandoned or working mines (to be facilitated by the mine owner) with environmental safeguards. Appropriate technology solutions will be applied to optimise water consumption for ash management. The segregation of ash may be done at the electrostatic precipitator stage, if required, based on site-specific conditions, to ensure maximum utilisation of fly ash.

The MoEFCC, based on the submissions of the power and coal ministries as well as NITI Aayog, noted that the extent of ash content in mined coal remains the same even after washing. Thus, it allowed the use of unwashed coal at TPPs. Further, it noted that with coal washing, the ash content gets divided (between washeries and the power plant), whereas if unwashed coal is used in a power plant, the ash content is handled at only one place, that is, the power plant itself. Apart from this, at TPPs have become technologically equipped to address pollution control and ash management as they have high efficiency equipment to capture fly ash, dry ash evacuation and handling systems, ash supply systems for ash utilisation, and tall stacks for wider dispersal of flue gases.

State-wise, five states generated over 10 mt of fly ash each during the first half of 2019-20. These were Madhya Pradesh, Maharashtra, Odisha, Uttar Pradesh and West Bengal. Chhattisgarh recorded the highest fly ash generation at over 20 mt. Meanwhile, Gujarat, Haryana, Punjab and Rajasthan achieved fly ash utilisation levels of over 100 per cent (Haryana reported the highest utilisation at 133.53 per cent), whereas Assam, Bihar and Madhya Pradesh utilised less than 50 per cent of the fly ash generated. 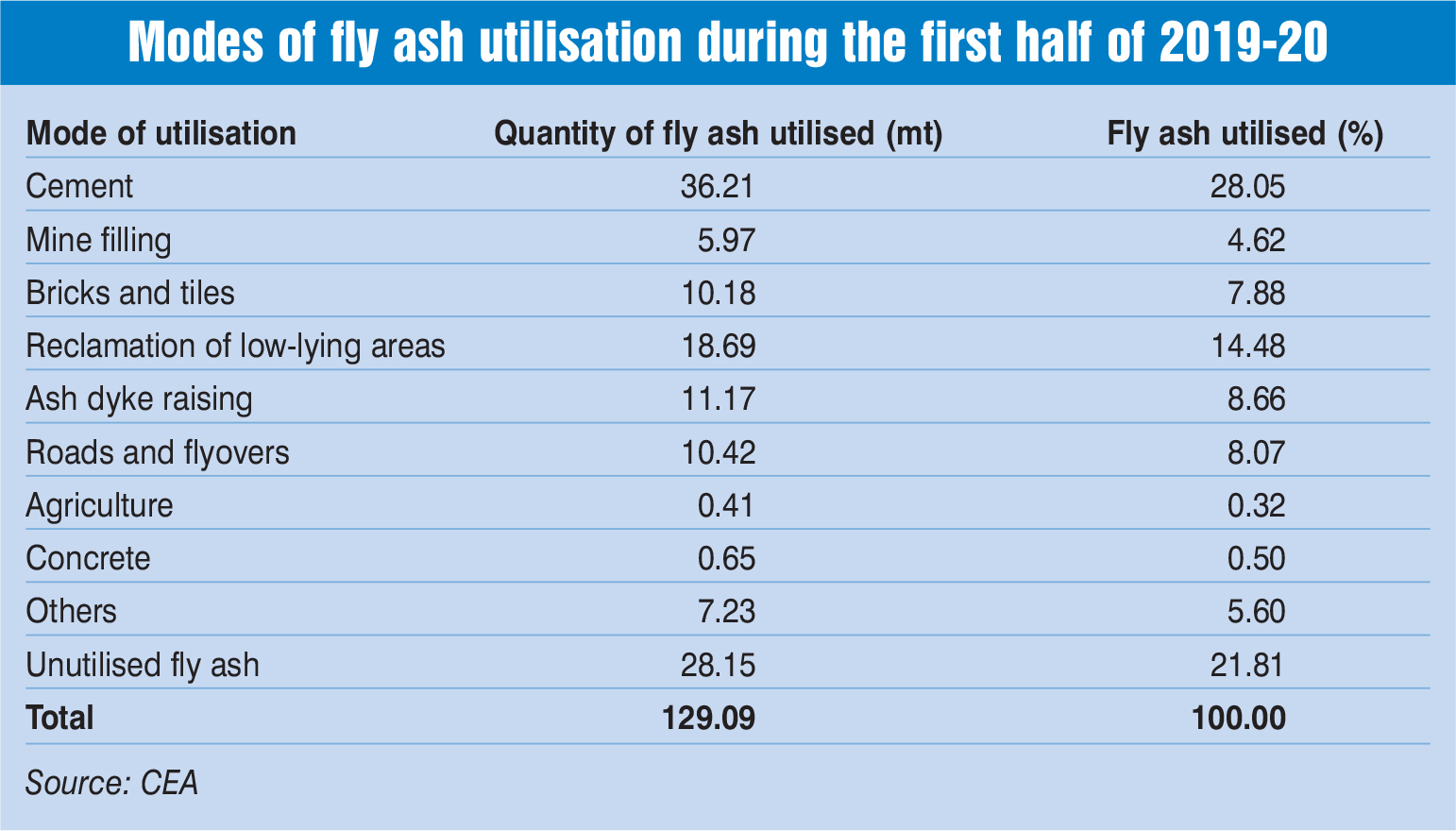 The cement industry is the biggest consumer of fly ash in India, with a 28 per cent share in the total utilisation. Blending fly ash in cement is environmentally sustainable and financially attractive since it reduces the requirement of coal and limestone in cement manufacturing. Around 15 per cent of fly ash was utilised as a substitute for soil or sand to reclaim low-lying areas, thereby saving the fertile topsoil. Besides these, fly ash is used in the manufacturing of bricks and concrete, which binds ash and prevents it from escaping into the environment. Fly ash-based bricks and tiles are as good as clay-based conventional bricks. Another use of fly ash is in building of roads and embankments since it is lightweight and compressible. In the agricultural sector, fly ash, being rich in micronutrients, helps in early maturity of crops, improves soil aeration, and conserves plant nutrients and water without affecting the groundwater quality.

In this regard, in March 2019, the Central Pollution Control Board (CPCB) released guidelines for the reclamation of low-lying areas and abandoned quarries with fly ash based on the recommendation by the expert committee constituted by NITI Aayog for developing a focused strategy for optimum utilisation of fly ash to manufacture end products. The CPCB’s guidelines provide a framework for the transportation and disposal of fly ash in low-lying areas and abandoned quarries in an environmentally friendly manner. Further, the MoEFCC has modified the conditions for environmental clearances of TPPs and coal mines. The earlier conditions prohibited the use of fly ash in abandoned mines/low lying areas/soil conditioner in agriculture. The new conditions stipulate that the CPCB guidelines will be followed in case of fly ash disposal for the reclamation of low-lying areas, there should at least be clearance for 500 metres of safe distance from the river or the waterbody in the case of fly ash disposal in abandoned mines, and the top layer of the fly ash disposal area in the abandoned mines should be kept moist during disposal.