In the HVDC segment, the share of transformation capacity at ±800 kV stands at 47 per cent (or 12,000 MW) and that at ±500 kV links stands at 53 per cent (13,500 MW). However, ±500 kV HVDC capacity has remained constant over the years and capacity addition has been solely achieved at the ±800 kV level through the commissioning of the Champa-Kurukshetra HVDC project and the BiswanathChariali-Agra HVDC project by Power Grid Corporation of India Limited (Powergrid).

The market size of the transformers industry reduced in 2019-20 vis-à-vis that in 2018-19. As per the Indian Electrical and Electronics Manufacturers’ Association, the market size of power transformers (PTs) and distribution transformers (DTs) shrank by 12.5 per cent and 14.8 per cent respectively during the period April-December 2019 over the previous year. The total domestic industry size stood at about Rs 16.5 billion in 2018-19, with DTs accounting for nearly Rs 10 billion and PTs accounting for the rest.

The decline in size can be attributed to subdued demand from the thermal power sector and muted capex by the industrial sector owing to a slowdown in manufacturing. This was exacerbated by a lack of order inflows in the last quarter of 2019-20, owing to the onset of the Covid-19 pandemic. The operations of transformer manufacturers were shut down, subsequent to lockdown-affected sales and brought production to a halt during March-May 2020. Transformer manufacturers are now taking a balanced view of scaling manufacturing operations in the current evolving market conditions and focusing on counterparties with stable payment track records. In the coming months, new orders are expected to be finalised by utilities depending on the severity of requirement, though service orders have already resumed. 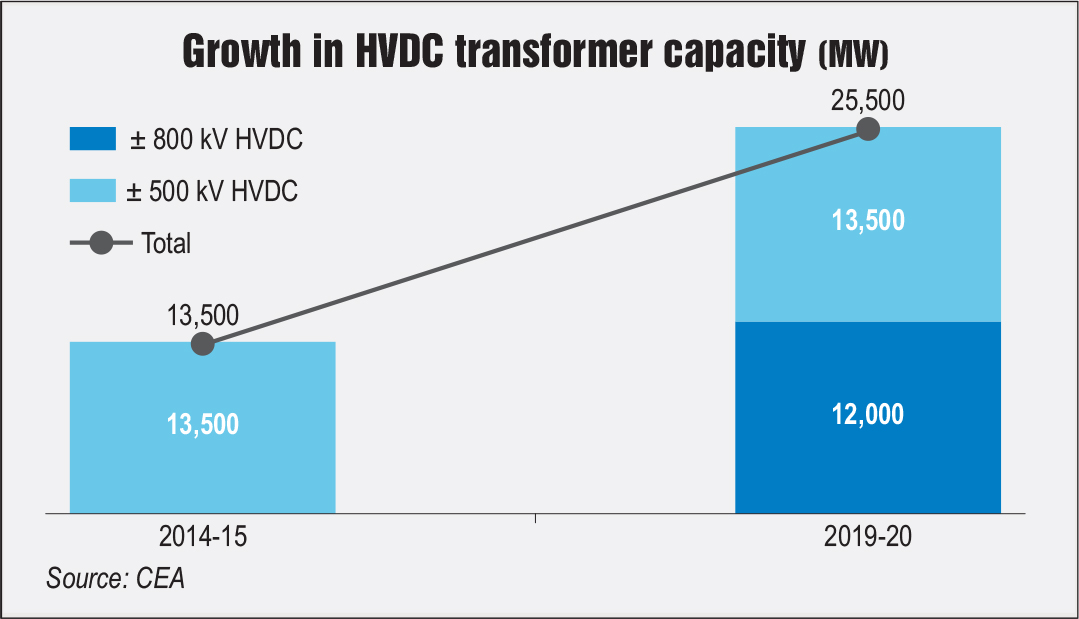 The grids of the future demand flexibility, resilience, intelligence and interconnectivity, with growing renewable energy and digitalisation across sectors. Digital or smart transformer technology is likely to witness significant growth in the coming years. Smart transformers independently regulate voltage and maintain contact with the smart grid in order to allow remote administration and real-time feedback on power supply parameters. These transformers are equipped with intelligent electronic devices, and intelligent monitoring and diagnostic features. The benefits of digital substations are plenty, including better productivity and functionality, greater reliability of assets and safety of substation operators, and lower cost and space requirements.

Some of the other key emerging transformer technologies include HVDC converter transformers, phase shifting transformers, coupling transformers and mobile transformers. HVDC technology has gained traction in recent years due to its ability to transmit large amounts of electricity over long distances with lower losses. Converter transformers form the core of HVDC projects as they transfer power between an AC system and the DC transmission network. Currently, Powergrid is implementing the 6,000 MW Raigarh-Pugalur UHVDC project at an estimated investment of Rs 160 billion. It has already completed bipole-I and associated AC lines are expected to be commissioned soon, while bipole-II and associated AC lines as well as a ±320 kV HVDC line and voltage-source convertor terminal are likely to be completed by December 2020. Going forward, more HVDC projects are likely to be taken up in the country in order to meet the growing demand for long distance high capacity power transfer as the  majority of renewable projects are expected to come up in remote locations, far from load centres. 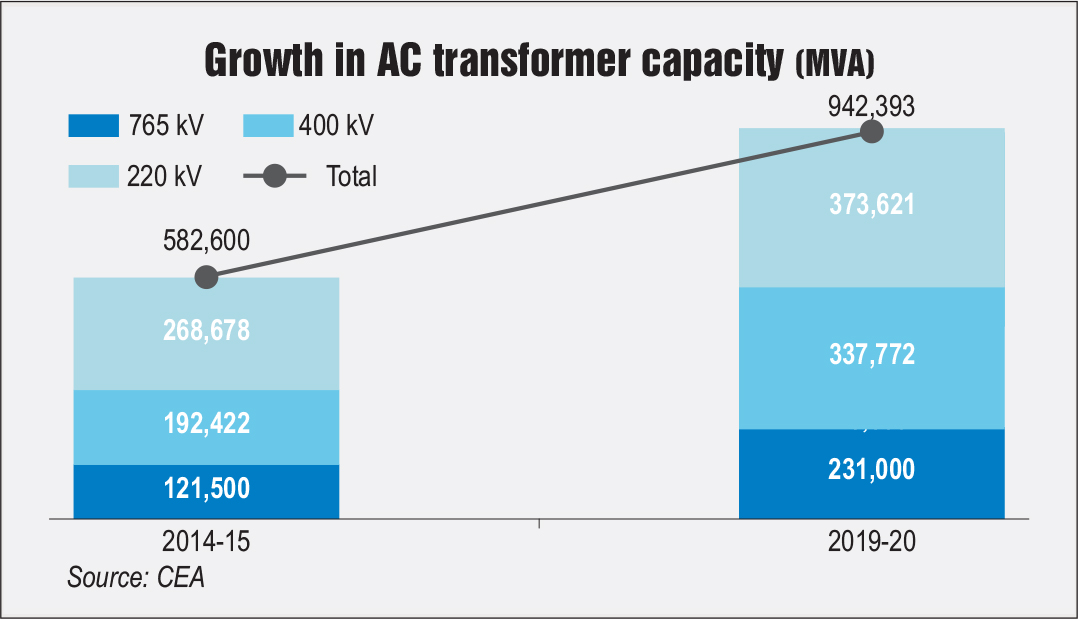 A key challenge of the transformer industry is the lack of standard specifications and guidelines for the installation and maintenance of transformers. To address this concern of stakeholders, the Central Electricity Authority (CEA) released the draft Standard Specifications for Transformers and Reactors (for 66 kV class and above) in August 2019. The guidelines aim to achieve high standard products and processes from procurement to commissioning and life cycle management. The standardisation process is expected to lead to several benefits – reduction in procurement time, less need for design reviews, availability of standard ratings that are interchangeable across utilities, availability of standard fittings, accessories, layout and architectural features and lesser requirement of inventories.

In addition, large unutilised capacity, aggressive pricing by competitors, highly volatile raw material prices and timely non-availability of imported raw materials at budgeted cost due to supply chain disruption in the wake of Covid-19 are key issues for the industry. Other issues include monopoly of labs and higher rates for short-circuit testing, payment delays by utilities, and cost-overruns in engineering, procurement and construction contracts due to delays in obtaining right-of-way clearances.

Renewable energy integration is the largest growth driver for transmission equipment including transformers. The majority of the upcoming capacity is under the Green Energy Corridors (GEC) I and II schemes. Another scheme for renewable energy zones (REZs) is under way to evacuate 66.5 GW of renewable energy capacity (50 GW solar and 16.5 GW wind) at an estimated cost of Rs 432 billion. The REZ scheme will be implemented in a phased manner with the first phase entailing the creation of transmission infrastructure for 28 GW of renewable energy capacity at an investment of Rs 168 billion and the second phase entailing the creation of evacuation infrastructure for 38.5 GW at Rs 264 billion.

Another key growth area for the transmission segment is railway electrification, which will offer opportunities to transformer manufacturers to meet traction power demand. As on March 1, 2020, 39,064 rkm of rail lines have been commissioned on electric traction, while 23,827 rkm is yet to be electrified. Indian Railways plans to electrify the remaining broad gauge route in the next four years at an estimated cost of Rs 300 billion.

Moreover, a likely improvement in discoms’ performance through proposed reforms such as amendments to the Electricity Act, 2003 would enable utilities to invest in strengthening sub-transmission and distribution (T&D) networks leading to an increased demand of low voltage transformers. In addition, transformers over the age of 20 years will need replacement in a phased manner, which is a potential growth area for the renovation and refurbishment business. Domestic transformer manufacturers also stand to gain from the recent ban on power equipment imports from China, which has been supplying low cost products in the Indian market.

Given that transformers are integral components of power networks, their demand would remain intact in the long run. The India Investment Grid, a platform of the Ministry of Commerce and Industry, has a pipeline of 75 T&D projects with an investment of Rs 115 billion. Overall, the National Infrastructure Pipeline (NIP) has estimated a capex of over Rs 3,000 billion each in the transmission and distribution segments between 2020 and 2025. As per the NIP, in transmission, the state sector is expected to lead with a capex of Rs 1,900 billion, followed by Powergrid with a capex of Rs 655 billion and the private sector at Rs 480 billion up to 2025.

Net, net, notwithstanding the current downturn in sales volume and order inflows, the demand outlook for transformers is positive for the coming years.