Will the current pandemic be a catalyst or an impediment for sustained change in theIndian power sector?

It comes as no surprise that in the current and post Covid-19 world, there will be many changes to the modern underpinnings of the modern world. The power sector – the backbone of any modern economy, too is witnessing several unexpected challenges. These include: the rise of flexible renewable energy and its integration, speeding up new regulations that will improve sector efficiency, and addressing continued and deep liquidity problems at Discoms.  The main question we askis:how willdecision makers respond to these changes and will they be able to make long term directional changes or face continued weakening of the sectors fundamentals.  In a positive response we have noted that policymakers and climate strategists have been stressing, over the past few months, the need to utilise the current pandemic as an opportunity to accelerate India’s transition to clean energy and address various structural issues in the power market.

Significant Reduction in Power Consumption on Account of COVID

One of the most drastic yet expected change was the massive drop in electricity demand for industrial/commercial usage (much higher than that seen among other developed but somewhat in line with some developing economies – See Chart 1 below). This was mainly triggered during the lockdown that resulted in initial stoppage of all commercial activity across manufacturing and corporate centres. April consumption across India dropped by over 23% as compared to 2019 and if you factor minimum growth of 3-4%, the impact was in excess of 25%.

There was a limited demand growth surgein May at an all India level,but it was still 15% lower than previous year meaning an impact of 18-20% due to stoppage of economic activity. The power demand gradually picked up in June with 10% below 2019and in early July, demand was approximately 7% below previous year.

We clearly see that a collapse in power demand will correlate with the impact on national income. Some surge in residential demand was evident special with work from home (WFH)and summer demand pick up.Also, there was an expected surge in seasonal agriculture demand as we see a rebound in Punjab, Haryana and UP in form of a lower reduction in June, and possibly even greater rebound in July. However, areas with a higher share of commercial demand like Delhi have had the maximum negative impact. Nationwide, the demand for power in the commercial segment remains weak.This trend is also measurable by power prices on the power exchange which during the first two months of the lockdown fell by around 25% as compared to 2019.

The positive aspect of this demand reduction is the lowering of greenhouse gas (GHG) emissions due to lower generation from coal fired projects,( there was a 27% lower than planned generation from thermal projects between April 1st to July 11th  as per CEA) as the impact on the dispatch stack has been disproportionally higher on coal fired projects due to their lower marginal price.

During April and May most states saw a double-digit drop-in demand of power as compared to 2019.Even in the major industrial states like Gujarat, Haryana, UP, TN, Kerala and Maharashtra there was a double digit decline, states like Delhi where most of the load is commercial or institutional saw a decline in excess of 25%.Demand improved in June but states like Delhi still recorded a 20% lower demand as compared to 2019, while in high Agriculture consuming states like Punjab, Rajasthan, even Bihar, Jharkhand, Chhattisgarh, Telangana, demand picked up somewhat. States with higher industrial or commercial consumption like Maharashtra, Gujarat, UP, Andhra, West Bengal MP all have closed to double digit reduction in demand as compared to 2019. Karnataka was one state where the demand dropped further in June than May, possibly due to a delayed response from the commercial sector (See Chart 2 below). 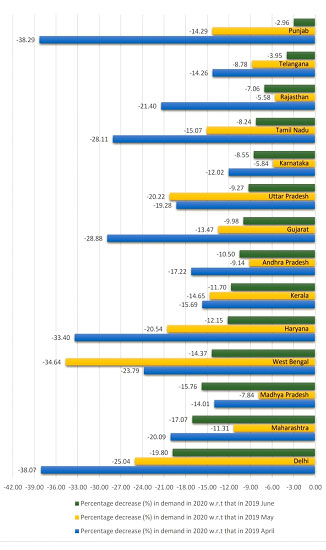 Most of the states appear to be power surplus,despite lower than planned generation overall and whatever their deficit they were buying from power exchange until May when the average price was down by23%, as compared to last year (See chart 3 below).However, by June, Discoms purchases from exchange reduced despite the prices falling more than 29%. One explanation for this could be that some part of demand was met through RTM (real time market)- which was 12% and 19% of DAM (day ahead market) in June & July respectively and possibly bilateral agreements were adequate to meet a significant portion of daily loads.

Sharp drop in commercial and industrial demand across statesis likely to create further financial stress on the discoms given that tariffs for these sectors are typically the highest, often cross subsidizing other segments.  Agriculture demand is clearly up and is expected to remain so during the sowing season through September. However, the point to remember is that discom get the highest revenue from Commercial consumers, following by top end residential consumers, industry and finally the agriculture and this demand pattern will be reflected in lower overall revenue of the discoms in months ahead.

Though Disoms may save on reduced cost of power purchase from power exchange in DAM, which was significantly higher (48%) during May as compared to last year, however this has eased in June even after counting a 12% purchase through RTM Juneonwards despite exchange prices softening further. We believe this could be because discoms will be required to pay fixed cost to the generators with whom they have a long term contract and also the fact that on the exchange the cashflow requirement is in advance, while the payments to long term contracts can be delayed.

Discoms are now facing a severe cashflow challenge on account of delayed payments by consumers, but this is expected to improve once Power Finance Corporation (PFC)/ Rural Electrification Corporation (REC)loans under the “Atmanirbhar Bharat” scheme will ease the burden of Discom payments to generators and other creditors. However, this can at best be a temporary relief measure over the next few months as the real issue of discom’s commercial viability remains fragile.

PFC released the discom report few days back saying the annual discom losses rose by 83% in 2019 and at INR 61,360 crore are above the level of 2015 the year Uday I was launched. UDAY scheme that ran between November 2015 and March 2019 aimed to reduce aggregate technical and commercial (AT&C) losses of discoms to 15% and eliminate the gap between cost of supply and revenue realised (ACS-ARR gap). According to the latest PFC report, AT&C losses were 22.01% and ACS-ARR gap was Rs 0.52/unit at the end of FY19. In FY16, when the scheme was launched, AT&C losses were 23.9% and the ACS-ARR gap was Rs 0.65/unit. Thus, there was reduction in the gap by 10% but that is far from adequate and is certainly not going to make the discoms viable. This will require measures beyond operational efficiency improvement which is necessary but not sufficient.

Current demand pattern and falling industrial and especially commercial demand is expected to increase this gap in the current year and for next year.

Hard decisions and implementing reforms are the only possible way forward

Business Model Draft amendment to Electricity Act which was put for public comments and is expected soon,has proposed certain changes in the discom structure like introduction of sub-licencee’s along with franchisee model which has seen mixed results in past. It also proposes certain major modification in the regulation process to make it more independent. We believe given the federal structure there could be challenges in implementation even if the amendment is passed during the next session of parliament. Government has also announced that some of the discoms will be privatised like those of Andaman and Nicobar Islands; Lakshadweep; Puducherry; Daman and Diu; Dadra Nagar and Haveli; Chandigarh; Jammu and Kashmir; and Ladakh. It would be a welcome first step if that happens. These hard decisions are doable in the current pandemic environment, because the business case is even more strengthened due to lower market prices, in addition to their overall profile – smaller utilities, fewerstaff numbers generally imply easier privatisation Enabling regulatory changes to allow for new market mechanisms are underway

Regulatory Changes Central Electricity Regulator Commission (CERC) recently introduced the Real Time Market (RTM) which is functioning quite well – averaging some 19% (July)of the Day Ahead Market. Power market regulation which was introduced on July 18th by CERC, can potentially create a new paradigm for the short- and medium-term market both for the business models as well as institutional process.POSOCO (Power System Operation Corporation)and CERC are also working on a National Open Access Registry project which is likely to further enhance the market efficiency. Implementation of SAMAST (Scheduling, Metering, Accounting and Settlement of Transactions in Electricity) across many SLDCs (StateLoad Despatch Centres) is underway. CERC has also tightened the deviation settlement mechanism (DSM).  All these changes are meant for better integration of renewable energy to the grid and make the Indian power market more stable and based on real time market signals like mature markets, rather than through emergency adjustments.

In terms of technological advancements, Indian grids including regional and state gridsare now large and complex and with significant market volumes and hence there is strong case for faster deployment of a new generation of power management systems; it could be in form of smart grids, modern meters, IOT bases sensors, system and process automation, forecasting of demand and supply, and data analytics. New Power Market Regulation can be an important catalyst for introduction of technology use in the bulk power market.

As the pandemic plays out and demand continues to remain below 2019 levels for some time to come, the key challenge our power sector faces is the gap between the cost of supply and revenue collected. India has seenfalling bulk power prices, both for conventional as well as renewable sources, and there is limited scope for further tariff declines to any significantly lower level. Consumer tariff of the paying consumer too are on the higher end as compared to our peer’s and competitors, and any further increase in tariff will likely impact the competitiveness of our manufacturing and services sectors.

The scope of improvement is clearly in better and more efficient system management to minimize the losses as well as operational costs of management, This will enable a smarter, more efficient power distribution system that will anticipate usage, deliver, re-route, and troubleshoot the needs of all users connected to the grid within seconds. Using machine learning algorithms will enable a grid of the future that can help control pricing and distribution in real-time – factors that are critical to the success of renewable energy.

This sort of IT technology will be needed and the local manufacturing eco-system can anticipate a strong push in this direction. 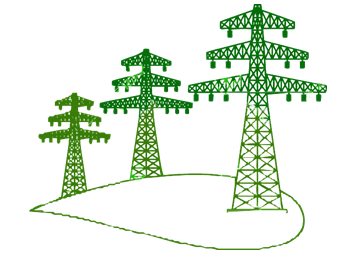 India following the global trend of moving towards a greener grid

Globally shift from Thermal to Renewable power continues as a major trend. EU has been the most aggressive in targeting 50% renewable share by 2030y. Interestingly, India too following the trend and is targeting 25% from renewable sources over next 10 years. We expect that with falling cost of renewable power and technology integration, both industries and discoms will start using more renewable by choice in coming years.

Crisis drives the industry towards its survival instinct and often the resistance to desired changes are the least during any crisis. The policy makers or regulators too find it easier to push through difficult changes during such times.  The challenges however during this period is to find resources and players who can make this happen.  We hope that the challenges are able to drive some of the long awaiting changes and introduction of new technology.