Despite the stress in the power sector owing to the pandemic, PFC ended the first quarter of 2020-21 on a positive note, clocking growth in its top line and bottom line (a 23 per cent increase in its consolidated net profits to Rs 35.57 billion and a 16 per cent year-on-year increase in consolidated revenues). The net non-performing assets (NPAs) as a percentage of the company’s gross loan assets stood at 3.41 per cent in the first quarter of 2020-21, the lowest in the past four years. Further, its key indicators maintained a stable range. On the liquidity standpoint, despite a challenging market, PFC was able to actively borrow from the market owing to its high credit -worthiness. During the quarter ended June 2020, PFC raised around Rs 330 billion from the domestic market.

In terms of loan disbursements, the company posted an increase from Rs 676.78 billion in 2018-19 to Rs 679.97 billion in 2019-20. Segment-wise, generation accounted for 53 per cent, followed by distribution at 36 per cent and transmission at 10 per cent during 2019-20. Sector-wise, 87 per cent of the total loans were disbursed to the government sector, and the remaining 13 per cent to the private sector. For the quarter ended June 2020, the loan disbursements by PFC stood at Rs 172.71 billion.

During 2019-20, the lending indicators, yield and spread, remained in a stable range of around 10.6 per cent and 2.9 per cent respectively. The capital to risk weighted assets ratio (CRAR) for 2019-20 was 16.96 per cent as compared to 17.09 per cent in 2018-19. The key reason for the depressed CRAR is the exclusion of any net unrealised gains by the Reserve of India (RBI) on the fair valuation of financial instruments from the calculation of own funds under CRAR, whereas all such net losses should be considered. For 2019-20, after including the net fair valuation gains, the CRAR would have increased by around 40 basis points. Further, the yield on earning assets stood at 10.68 per cent during the quarter ended June 2020, while the spread touched 3 per cent. The CRAR improved by 36 basis points over the previous quarter, largely due to profit addition.

PFC has been making continuous efforts to resolve the stressed assets/NPAs in its books. The share of NPAs as a percentage of gross loan assets came down to 3.8 per cent in 2019-20 from 7.39 per cent in 2017-18, recording the lowest net NPA ratio in the past three years. During April-June 2020, the share of NPAs fell even further to 3.41 per cent.

Although the resolution process slowed down a bit due to the Covid situation, after the lockdown, PFC successfully resolved and upgraded two stressed assets – Essar Power Transmission’s loan of Rs 4.38 billion and Suzlon Energy’s loan of Rs 9.15 billion, during the quarter ended June 2020. As of June 30, 2020, the company’s NPAs (Stage III) in the private sector stood at Rs 265.35 billion, against which 55 per cent provisioning has been carried out. Currently, 27 projects are in Stage III, of which 17 projects worth Rs 161.62 billion are at the NCLT, while 10 projects are being resolved outside the NCLT. 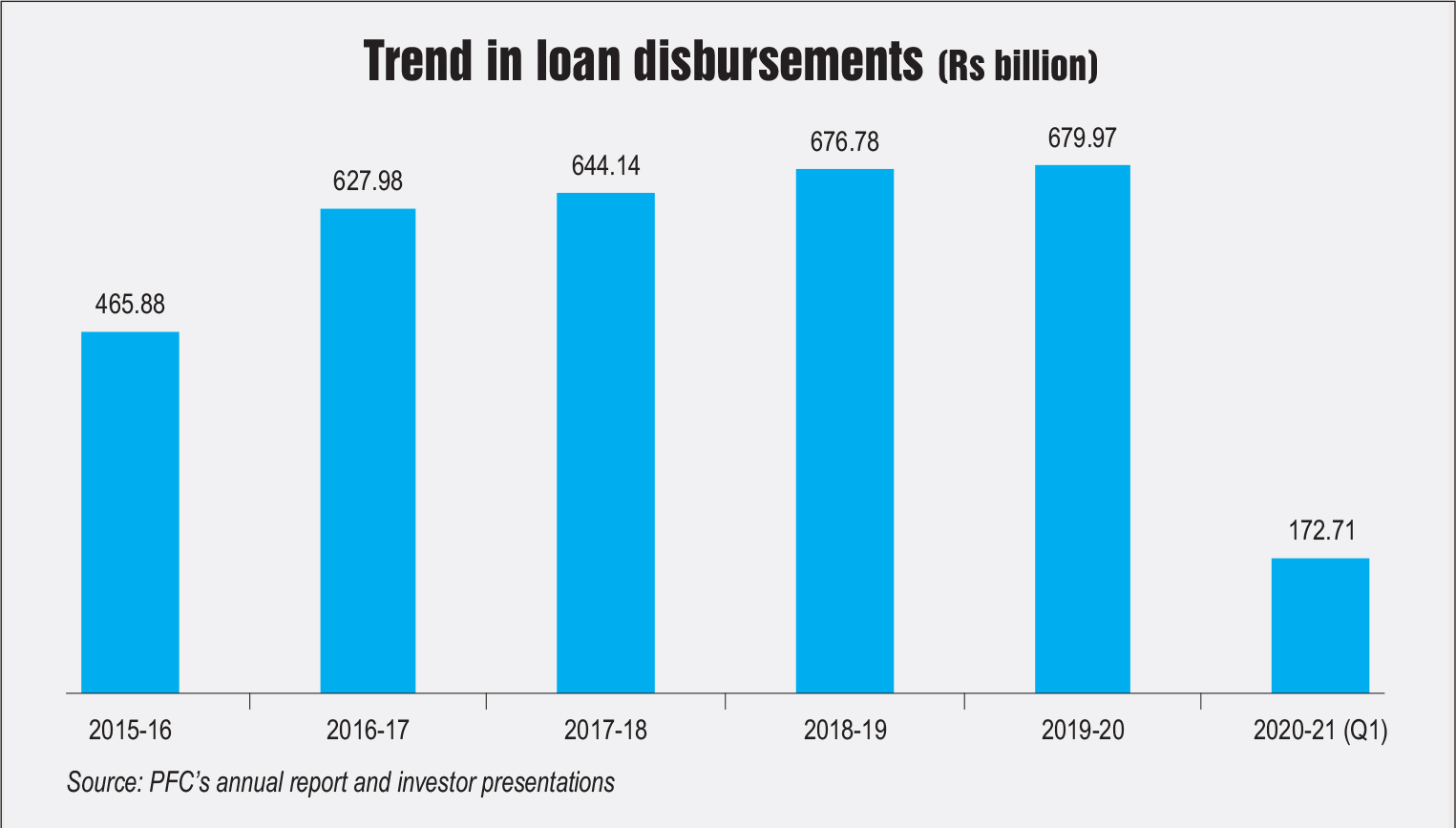 The outstanding borrowings of PFC stood at Rs 3,034.52 billion as of March 31, 2020. PFC raised $3.05 million from the foreign markets during 2019-20. PFC is increasingly focusing on the diversification of its borrowing portfolio. The share of PFC’s foreign currency portfolio stood at 16 per cent in 2019-20, while the remaining 84 per cent of funding came from domestic sources. There were no outstanding commercial papers at the end of 2019-20 as against 4 per cent in 2018-19.

For 2020-21, as per the approved borrowing programme, PFC has envisaged a fund mobilisation of Rs 900 billion from domestic and international markets. Of this, PFC has raised almost Rs 330 billion from the domestic market as of quarter ended June 2020, 85 per cent of which was raised through long-term instruments (bonds or term loans), and the balance through commercial papers. In addition, PFC has around Rs 92 billion line of credit available from banks.

Among the various measures introduced, RBI has inter alia permitted lending institutions including NBFCs to grant a moratorium of six months on the payment of all instalments due between March 1, 2020 and August 31, 2020. In line with these guidelines, PFC has provided a moratorium option for an amount of Rs 114.97 billion during March-June 2020, that is, on approximately 70 per cent of the dues receivable by PFC.

Also, amid the lockdown, the government announced a Rs 900 billion credit package under the Atmanirbhar Bharat Abhiyan to facilitate liquidity flow in the power sector. PFC and REC have been mandated as the key lending partners for the same. The credit will be lent to discoms in two tranches, 50 per cent in Tranche I and the balance in Tranche II by PFC and REC. PFC has formulated a scheme for extending loans to discoms, under which loans will be extended for a maximum tenor of up to 10 years against the outstanding dues of discoms. Such lending will be on commercial terms and conditions, and backed by state government guarantee. Currently, out of its lending portion of Rs 450 billion, PFC has sanctioned more than Rs 300 billion and disbursed more than Rs 85 billion as of June 2020. For the remaining sanctions/disbursements, the states are in the process of completing the formalities. Recently, the cabinet granted a one-time relaxation to PFC and REC for extending loans to discoms above the working capital limit of 25 per cent of the previous year’s revenues under UDAY. 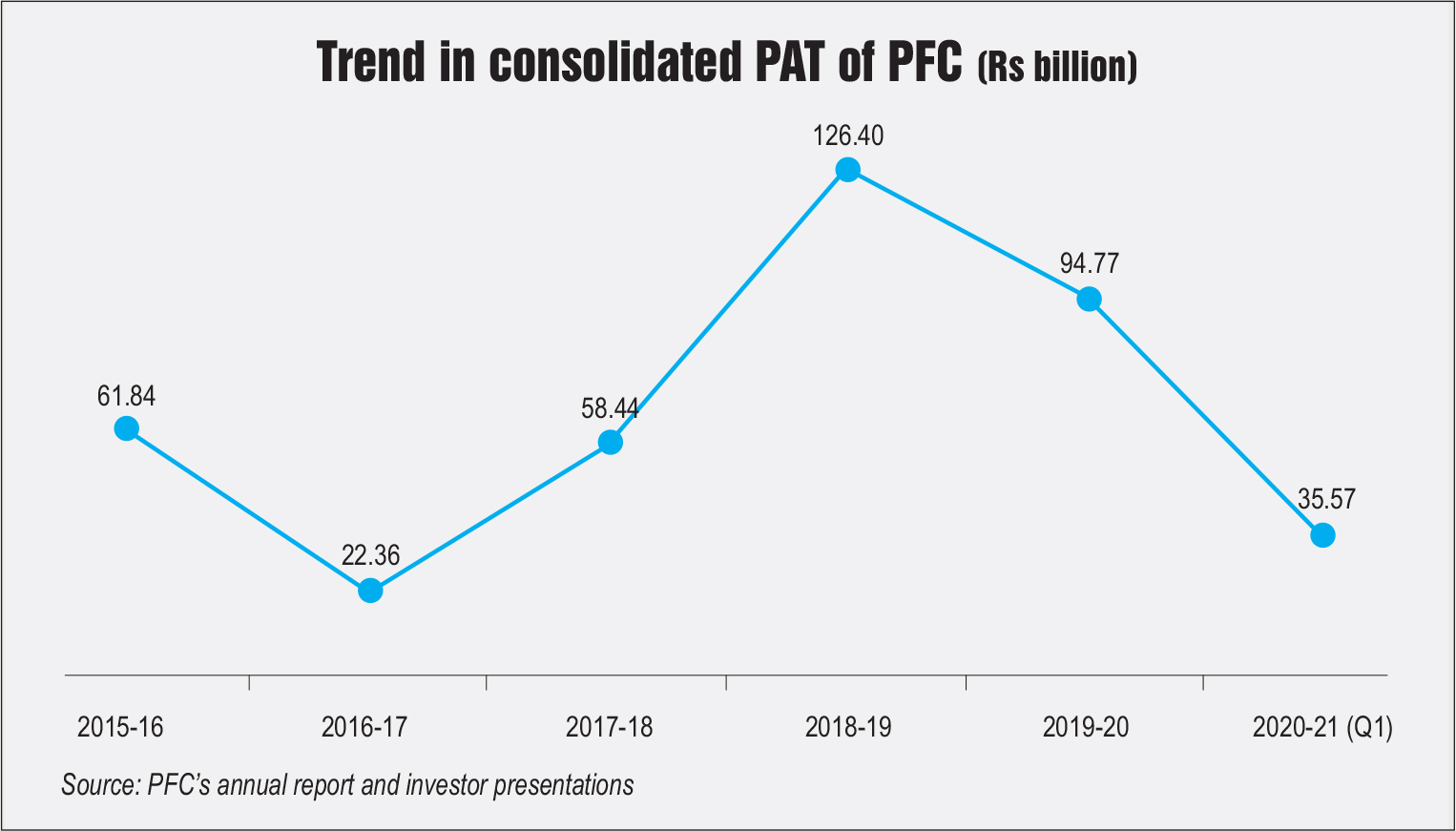 With strong fundamentals, PFC has been able to smoothly navigate through the Covid situation. That said, a clear impact of Covid will be seen in the future developments of PFC. At present, the company’s focus is on the transmission and distribution, and renewables business as well as on lending under the discom credit package. The company is also envisaging business opportunities in the FGD space and the refinancing business. Overall, PFC is quite optimistic and expects a growth in loan assets at similar levels as the previous year. Huge funds will be required to bring the power sector back on track and PFC is well positioned to tap this opportunity for its growth.