The construction of inclined pressure shafts is usually the most challenging job worldwide. When it comes to the replacement of any ruptured steel liner segment confronting heavy ingress of water from a saturated hill mass, coupled with constrained space, the difficulty level increases manyfold. This paper gives an account of the rectification works of the steel liner taken up in each of the two pressure shafts, with 3.5 metre diameter and 1.5 km length at 30 degree inclination, at NHPC’s 800 MW Parbati II  (HEP) in Himachal Pradesh. The replacement of a 3 metre long steel liner in each pressure shaft was accomplished successfully through the in-house engineering prowess of NHPC’s engineers. The relentless efforts by the engineers paved the way for successful completion of rectification works and the project was made operational at part load by utilising the available water from Jiwa nallah.

During the testing of machines in March 2017 and July 2017, the seepage of water in the order of 600-800 litres per minute (lpm) was observed at about 1.6 km downstream of the powerhouse. During the inspection of the HRT and pressure shafts, minor to moderate seepage was observed from gantry joints/grout holes in the HRT at a few locations and longitudinal/curvilinear cracks were observed in the left and right pressure shafts with ingress of water.

Geology of the hill mass around the pressure shafts

The hill mass along the pressure shafts consists of slope wash material comprising blocks of rock and debris in the upper layer. The outcrops indicate the dominance of metabasic rocks, slightly weathered and jointed in nature (Fig. 2).

Both the pressure shafts were excavated with a double shield TBM with excavated diameter of 5 metres to achieve a finished diameter of 3.5 metres. The shafts have bottom horizontal legs of ±300 metres, inclined portion of 1,500 metres and top horizontal portion of ±200 metres. The excavated rock was supported with 200 mm thick precast concrete segment lining with pea gravel filling. Further, the pressure shafts were steel lined with ASTM A 517 Grade F steel of variable thickness (16 mm to 42 mm), followed by M25 grade 400 mm thick self-compacting backfill concrete in between (Fig. 3).

Design parameters of the steel liner

The steel liners have been designed for internal water pressure, corresponding to FRL (EL 2,198 metres) with water hammer effect for EL 2,234.3 metres in the surge shaft without considering any rock participation2. Over and above 1.5 mm, corrosion allowance has been considered. Further, the liners are designed for external pressure corresponding to the reservoir level or the ground level vertically above the pressure shaft invert, whichever is less. An initial gap between the steel liner and concrete has been assumed as 0.0007R, which is equal to 1.22 mm; however, if the initial gap between the liner and concrete exceeds the assumed value, the ferrule may reach critical buckling pressure at a value of 0.0035R, that is, 6.1 mm, which may lead to failure of plates. 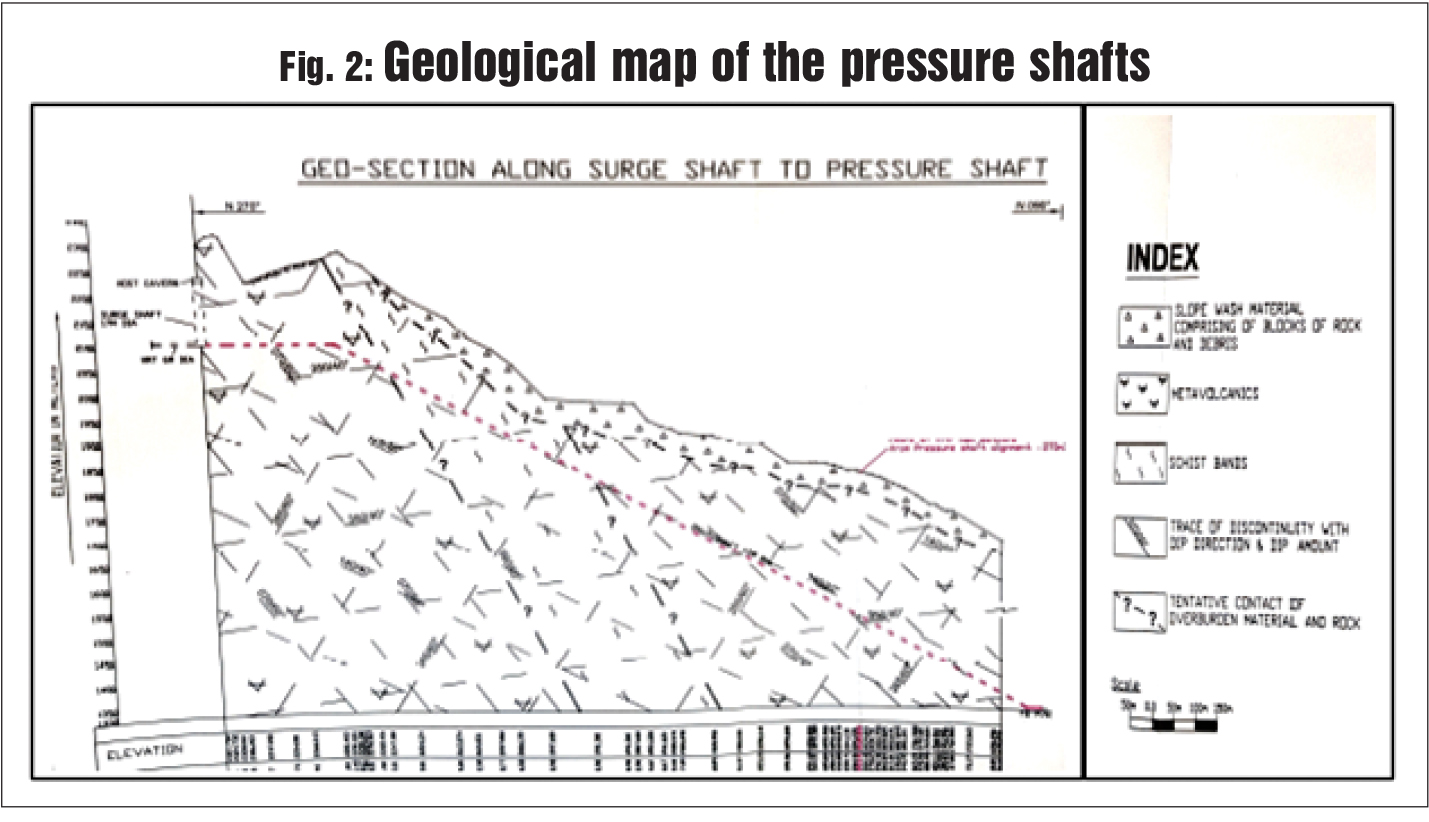 Failure of plates and analysis 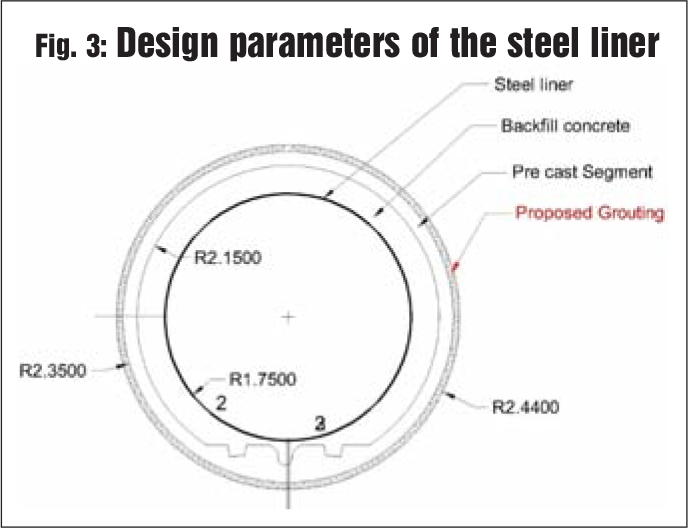 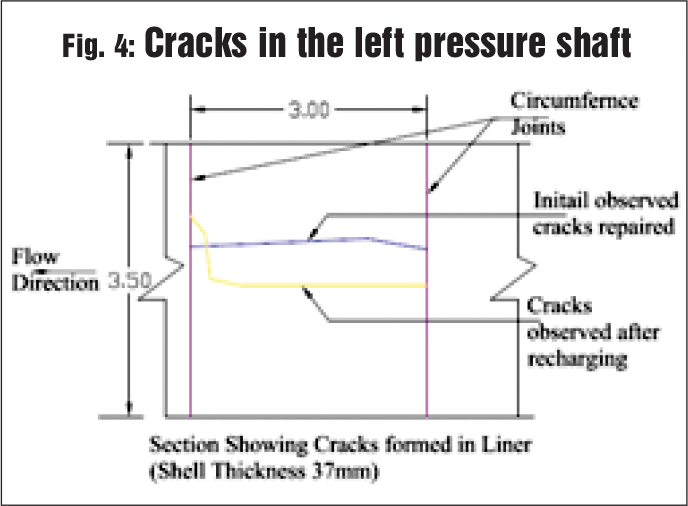 The water conductor system was also emptied during this period to rule out any possibility of charging of the surrounding hill mass due to seepage from the HRT. The critical buckling of the steel liner was taken care of at the design and model study stages and therefore failure due to inadequate plate thickness was ruled out. 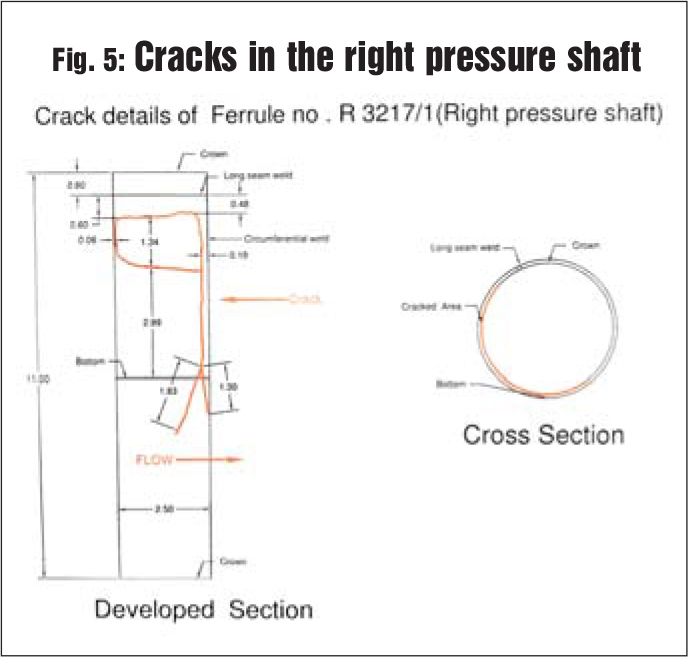 The sample of the ruptured ferrule was sent for testing to reputed labs, which indicated the failure of the sample in meeting the tensile test and Charpy V-notch impact test (Table 1).

Additional strengthening of the pressure shaft

Having established the reasons of failure as inadequate structural properties in one lot of material used in the erection of the liner, the option to either reinforce the defective liner or replace the same was discussed. Further, to take care of any shrinkage in the self-compacting concrete behind the steel liner resulting in minor gaps, it was decided to first carry out additional consolidation grouting in the full length of the pressure shaft as per the drawing issued by the design division (Fig. 6). 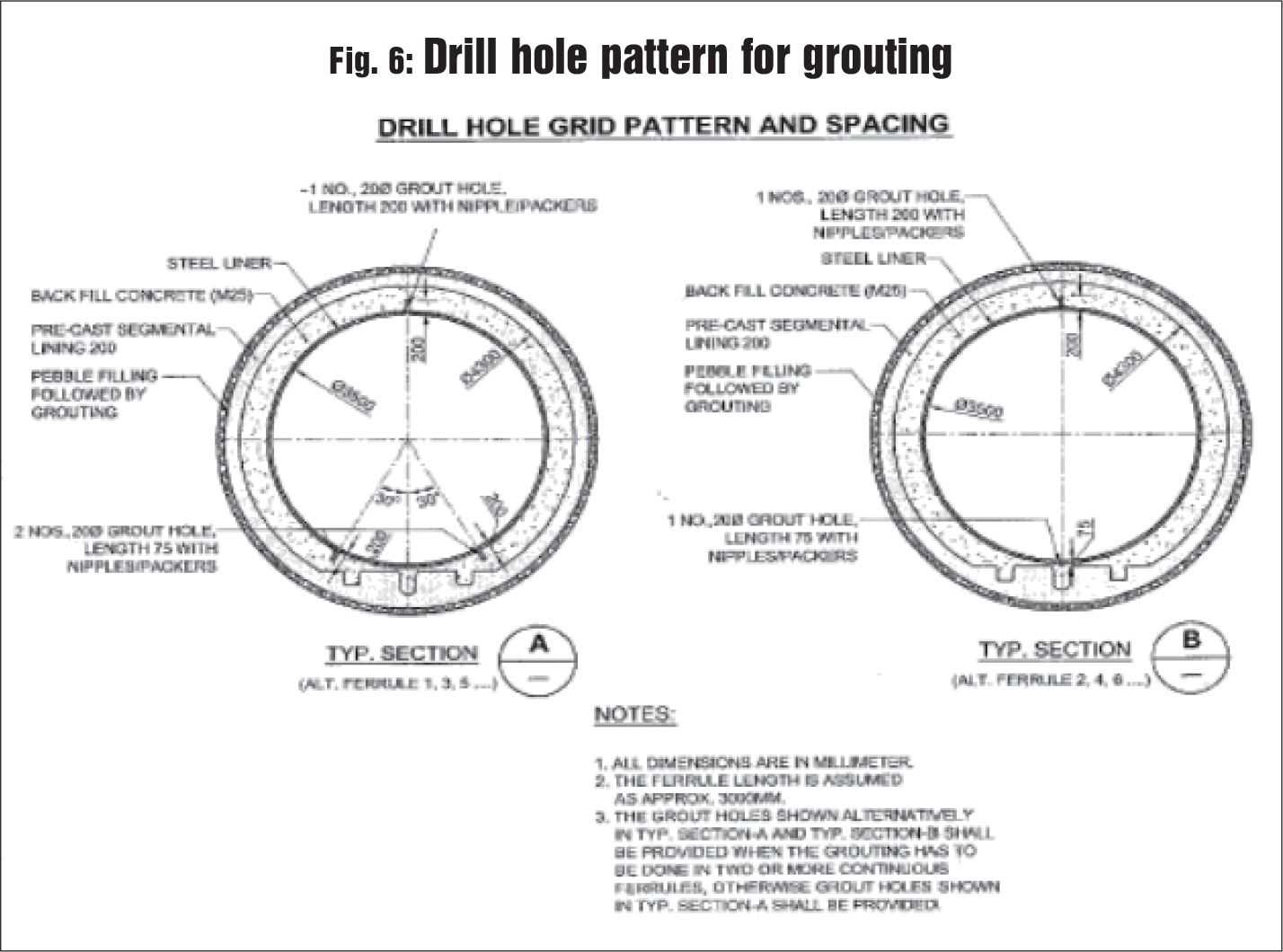 The decision of reinforcement of the ruptured ferrule vis-à-vis replacement with a new liner was based on the merits and demerits of both the options. Reinforcement of the existing liner could have been easier; however, maintaining the homogeneity of liners was a major challenge and stability in the long run was sceptical. Accordingly, it was decided to replace the liner, which involved cutting of the existing plates, tackling seepage from the precast segment, installing new liners, moisture-free welding, etc. For smooth  replacement of the damaged ferrule, grouting was carried out through two grout pumps in stages, from bottom to top. In the left pressure shaft a total 120 holes were drilled and grouted with OPC in a length of about 1,500 metres. Additional grouting was also carried out by using microfine cement simultaneously to ensure packing of voids on account of shrinkage, if any. The total grout intake in the left pressure shaft is mentioned below.

The seepage in the left pressure shaft was tackled with PU grout before cutting of plates through a portable electrically operated PU pump capable of injecting grout up to 60 bars. For shifting new plate segments inside the pressure shaft, dismantling of the main inlet valve (MIV), arrangement of a 45 T capacity Winch, fabrication of a special trolley for transportation of the steel plate segment and deployment of technical crew for its erection was done at the site. A total of 11 pieces plates, with approximate weight of 1,000 kg each, were placed in the left pressure shaft. 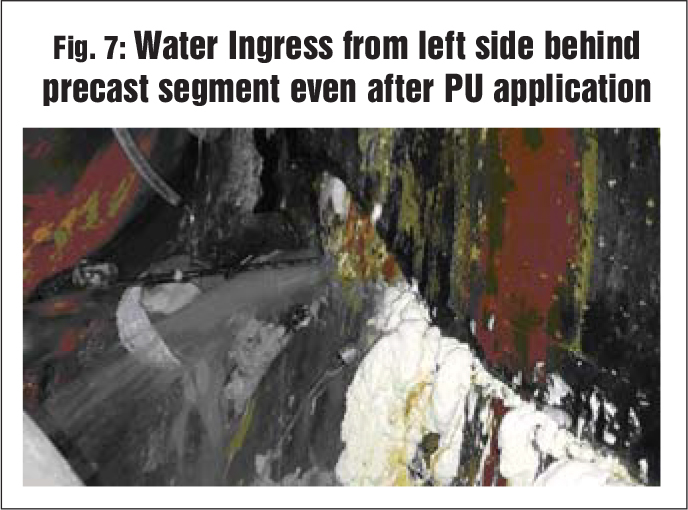 Rectification of the right pressure shaft was more challenging due to huge seepage all along the length, particularly at the location of the ruptured ferrule. There was continuous ingress of water in the order of 350 lpm from the ruptured liner. Due to extensive seepage all across the circumference, moist conditions prevailed inside the liner. Under such conditions, neither electrically operated cutters nor gas cutting could be carried out as single-component PU foam grouting was done to arrest the seepage water before the cutting of plates. As seepage could not be eliminated even after the application of single-component PU, water was channelised by installing gate valves. The PU material used in the grouting was fire resistant but its foam started burning at flashpoint; this was a major impediment and a safety hazard in the cutting of plates (Fig. 7); however, this was overcome by adopting a careful cutting pattern. After the cutting of plates, chunks of backfilled concrete/grouted microfine cement of size 1.24 x 0.60 x 0.40 metres got dislodged, exposing the precast segments and resulting in the ingress of seepage water through joints of precast concrete segments (Fig. 8). 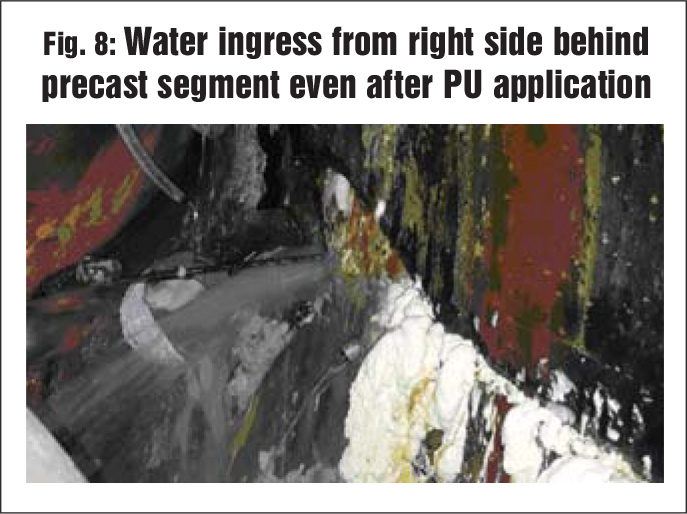 After rechannelising seepage water through pipes and gate valves, the cutting of the remaining steel liner and sequential re-erection of liners was done. However, due to a continuous seepage of water all along the ruptured ferrule, the root welding of plates failed every time. To arrest seepage, heavy grouting with normal OPC/microfine cement and PU was done but root welding failed repeatedly and by this time six segments were already placed (Fig. 9). 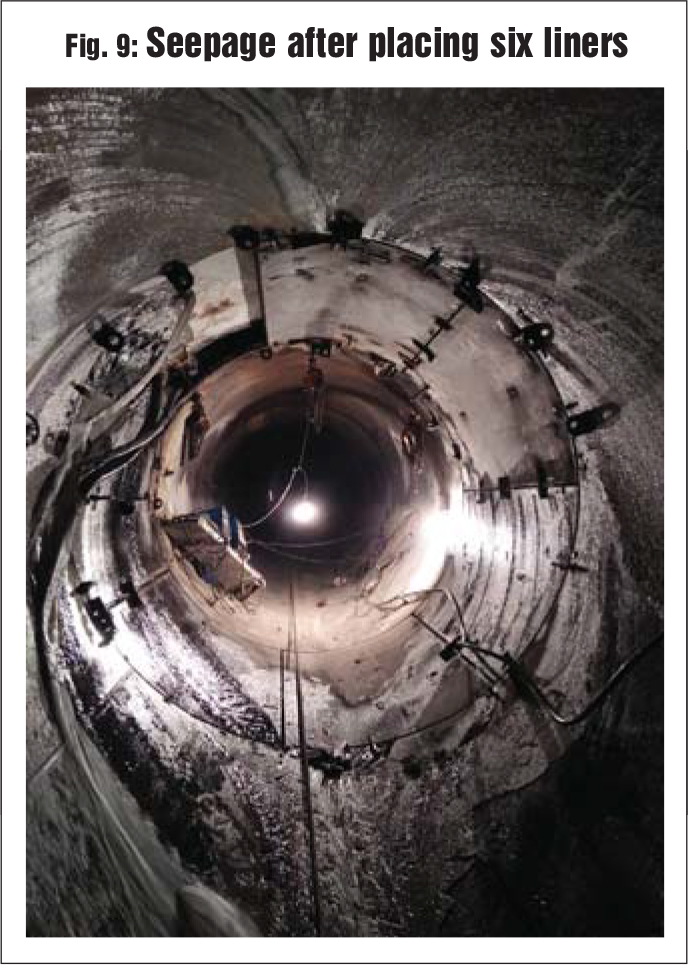 The operation was very challenging due to the uneven seepage pattern behind ferrules. At some points, seepage was encountered at very high pressure even after multiple grouting. Single-component PU material was not effective at many places due to non-foaming observed even after several days of grouting. The resin remained in liquid form and used to eject with high pressure during inspection. Meanwhile, seepage in the order of 250-300 lpm continued from behind the precast segments. Efforts to stop this inflow by using the single-component PU grout at high pressure resulted in the development of cracks in the backfill concrete all across the circumference, indicating interconnections of the water path. This led to apprehensions that a huge concrete mass could fall on the manpower working below on the trolley and pose a safety hazard (Fig. 10).

The project was running short of time as the monsoon season was about to begin and any delay in completion could result in further charging of the surrounding hill mass, resulting in increase in seepage and jeopardising the success of the entire work. Therefore, in order to plug the holes and carry out the replacement of new liners, single-component PU material was used. The pattern of consumption of the material in grouting indicates huge voids in the vicinity of the liner where OPC with microfine cement consumption was also higher than in other stretches. The huge quantity of OPC and microfine cement grout intake near the ruptured ferrule also means the presence of larger void spaces behind the precast concrete segment. 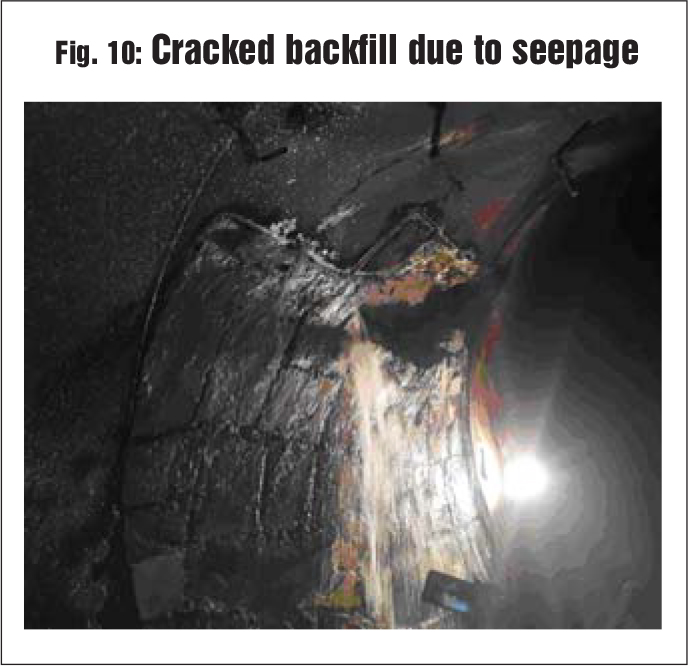 The commonly available grouting pumps in the market are pneumatic machines; however, these could not be deployed at this site due to non-practicability of providing air line for such long distances. The GRACO Tough Tek Microfine Cement Grout Pump with capacity to pump at 60 bars was improvised with electric motor for microfine cement grout. Further, the GRACO TEXSPRAY PU Grout Pump was improvised by installing two pistons for using two-component PU material with the facility of mixing at the nozzle tip and capacity of delivery up to 10 lpm.

Silicate-based PU material was used to impart strength and to achieve early strength due to its property of early gel formation, so as to fill the cavity behind the precast segment, where all previous efforts of grouting with microfine cement could not succeed. As the plates were in contact with the backfill material, cracks were noticed after root welding  due to minor seepage  from the area already grouted, thus requiring the relocation of the already erected six ferrules and channelisation of seepage water. In order to eliminate even the slightest possibility of moisture, work was carried out in the following steps: 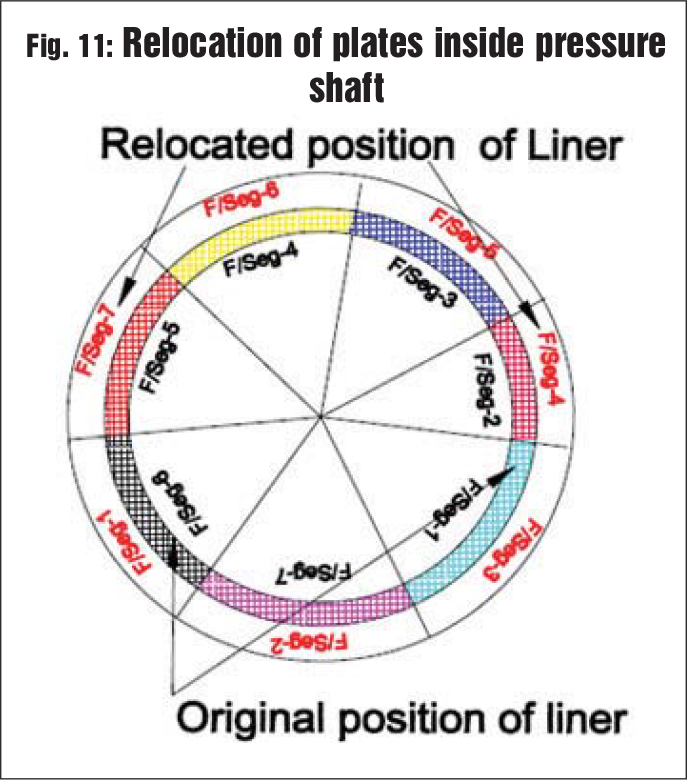 This could be achieved by improvising a small portable electric pump for carrying out microfine grout by limiting the injection pressure within 1.5 MPa (15 bar) and two-component PU for sealing the moisture as per site conditions to achieve welding of the steel segment. For grouting of the entire right pressure shaft, a total of 259 holes were drilled with material consumption as below:

The quantum of grouting with cement (OPC/microfine) is approximately six times the grouting in the left pressure shaft and more than 10 times in terms of PU; this indicates the unpredictable underground conditions prevalent in the vicinity of both the shafts having a lateral cover of barely 50 metres from each other. The total time taken for the rectification of the right pressure shaft was about 13 months as against the four months time taken in the left pressure shaft. The segment shifting process through MIV and the welding and post heating process are depicted in Figs. 12 and 13 respectively. 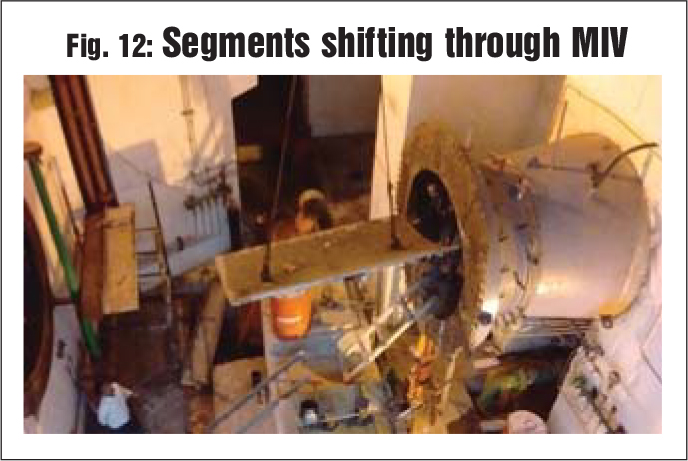 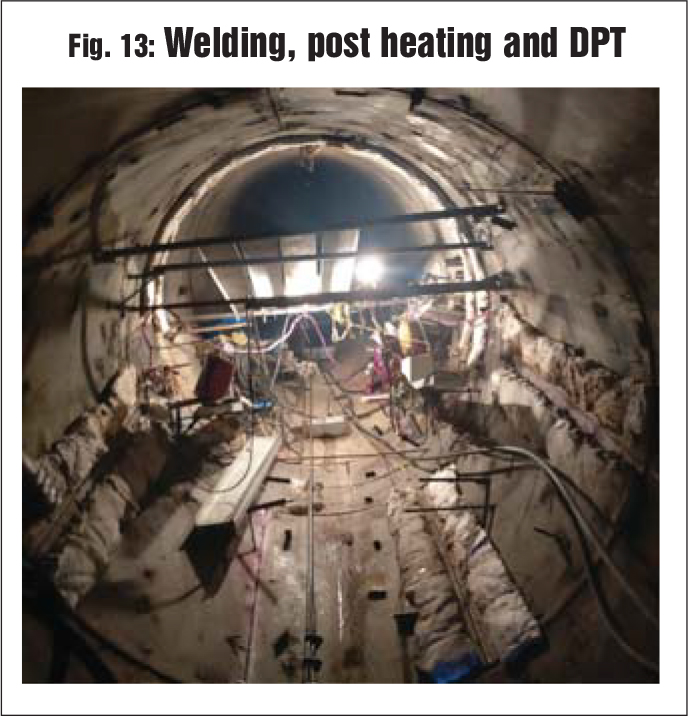 Since the test results of the damaged ferrule of a particular lot of ASTM Grade plates of one particular heat number were found to have lesser strength parameters, that is, tensile strength and Charpy V-Notch Test Values (Table 1), the probability of the ferrule reaching critical buckling pressure and expansion beyond yield stress could be one of the reasons for the failure of the plates. Further, the quantity of grout intake indicated gap/voids between the liner and precast segments and behind the precast segment in the pea-gravel, leading to the displacement of the precast concrete segments; however, it could not be ascertained.

The project execution team continuously strived for innovative methods and relied on the famous Japanese approach “Kaizen” for process improvement during rectification, so that the criticality of work and day-to-day challenges could be overcome by thinking out of the box. This led to successful accomplishment of rectification works, helped in skill development and built the confidence of the in-house team in carrying out repair works under such extreme conditions.

(Disclaimer: The views expressed in this paper are of the authors and not those of the NHPC management.)

1   Investigation by the in-house geotech division of NHPC

4  Based on an independent test conducted by TCR Advanced Engineering, Vadodara.