Hydropower, given its role in imparting flexibility to the system and balancing the load, is likely to play a key role in the coming years, espially with greater integration of variable renewable energy such as wind and solar. In fact, the support provided by the flexibility of hydropower resources in meeting the rapid drop and rise in power demand on April 5, 2020 at the time of the pan-India lights-off event during the Covid-19 lockdown period has helped policymakers to seriously think of installing hydropower projects, along with pumped storage.

The installed hydropower capacity (projects over 25 MW) in the country stood at 45,699 MW as of June 2020. The installed capacity has grown at an abysmally low compound annual growth rate (CAGR) of about 2 per cent in the past five years (2014-15 to 2019-20). In contrast, coal-based power capacity and renewables have grown at a CAGR of 7 per cent and 20 per cent, respectively, in the same period. Hydropower capacity addition (net) too has slowed down significantly in recent years, with just 106 MW in 2018-19 and 300 MW in 2019-20. The long gestation period of hydroelectric projects (HEPs), coupled with geological surprises, local resistance, delays in obtaining environmental clearances, limited offtakers and a lack of policy focus are key reasons for this slowdown in the growth of the hydropower segment in India.

Around 22 hydropower generating units have been commissioned by various central, state and private entities in the past three years. The majority of these HEPs are located in the north-eastern states of Arunachal Pradesh, Mizoram, Meghalaya and Sikkim. These include North Eastern Electric Power Corporation Limited’s 300 MW Kameng HEP (Units 1 and 2) (commissioned in February 2020) and 110 MW Pare (Units 1 and 2) (May 2018) in Arunachal Pradesh, besides Telangana State Power Generation Corporation Limited’s 30 MW Pulichintala (Unit 4) (September 2018).

Hydropower generation stood at 156 BUs in 2019-20, the highest in the past decade, mainly owing to ample rainfall and a steady electricity production from HEPs. The generation in 2019-20 was 14-15 per cent higher than that of the previous year as well as the target set. However, the share of hydro generation in the total generation declined, although marginally, from 12 per cent in 2014-15 to 11 per cent in 2019-20, owing to an increase in the capacity of the wind and solar segments.

Small hydropower (SHPs) plants, or projects of 25 MW capacity and less, used to be exclusively covered under the ambit of renewable energy until last year, but when the central government notified the hydropower policy, all HEPs (irrespective of capacity) were categorised as renewable sources of energy. SHP capacity grew at a CAGR of about 2.9 per cent between 2014-15 and 2019-20 and currently stands at about 4,683 MW (against an estimated potential of 20,000 MW across 6,474 sites). However, private participation in the SHP segment, as against other mainstream renewable energy options such as solar and wind, is limited due to the large size of investments involved as well as the long delays in obtaining permits, low tariffs and modest returns.

With the increase in variable renewable energy capacity, pumped storage plants (PSPs) can provide an ideal solution for energy storage and load balancing. Though India has a PSP potential of 96.5 GW, only 5 per cent of it has been harnessed so far. Currently, there are nine PSPs with a total capacity of 4,786 MW. However, only six PSPs (Kadamparai, Bhira, Srisailam, Ghatgar, Purulia and Nagarjuna Sagar) aggregating 3,306 MW are working in both generation and pumping modes. The remaining three PSPs (Panchet Hill, Sardar Sarovar and Kadana Stages I and II) aggregating 1,480 MW are working only in generation mode, owing to the unavailability of lower reservoir/ tail pond and vibration issues. 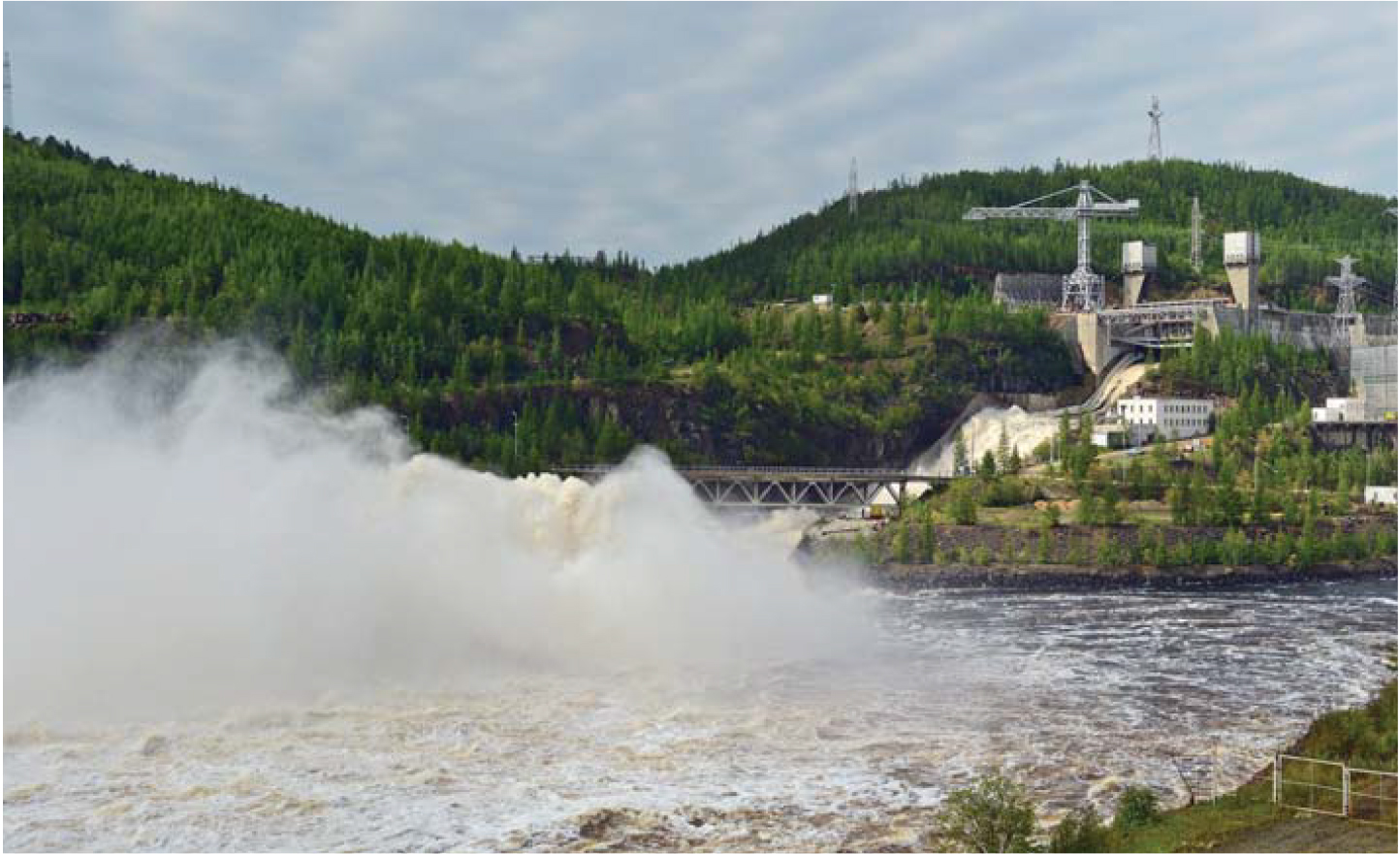 The hydropower sector in India is set for revival with an impetus from policy measures announced by the central government last year. The measures such as the inclusion of large hydro in renewables, tariff rationalisation and budgetary support for flood moderation and the infrastructure components of hydropower projects have led to an optimistic outlook for the sector that had long been neglected by policymakers. This has been followed by recent amendments pertaining to the notification of hydropower obligation in the draft Electricity Act,  2020 notified in April 2020. 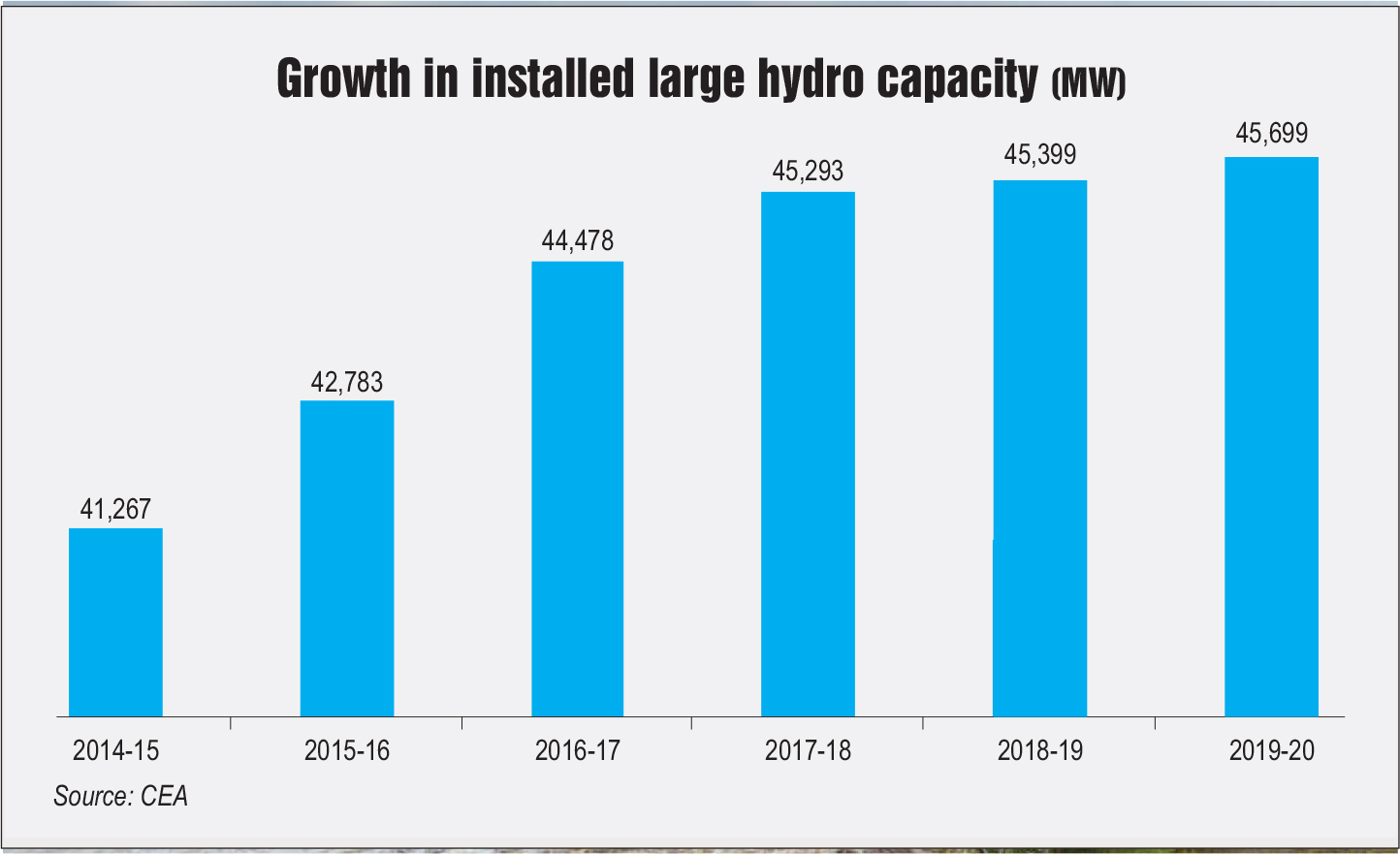 That said, the sector’s growth continues to be impeded by several challenges. Hydropower capacity aggregating 3,166 MW across 12 projects is currently stressed due to liquidity issues with developers, legal matters, contractual disputes, and/or delays in statutory clearances. These projects represent an investment of about Rs 300 billion. The past year witnessed certain merger and acquisition deals, wherein NHPC acquired insolvency bound stressed assets (Lanco’s Teesta VI HEP and Jal Power’s Rangit HEP), but greater traction in the resolution of stressed assets is needed. Financial institutions also need to step in to bring innovative funding solutions for the hydro segment.

In terms of the future project pipeline, about 9.8 GW of hydropower projects are under construction and scheduled to be commissioned in the next five years. Besides, there are over 23 GW of HEPs waiting to take off for construction but approvals from the environment ministry are pending. Going forward, in order to fast-track the growth of hydro, concerted efforts by all stakeholders are required.