The Covid-19 crisis has posed widespread challenges for discoms as the decline in demand has led to revenue losses and liquidity concerns. The pan-India lockdown to control the spread rendered the commercial and industrial (C&I) segment inactive. Since these high tariff-paying consumers constitute 45-55 per cent (industrial 40-42 per cent and commercial 8-10 per cent) of the overall power demand, the shutdown of C&I establishments led to a considerable decline in the power demand. The overall power demand declined by over 30 per cent during March 23-28, 2020, the week the 21-day lockdown period started, as compared to the previous week of March 16-22, 2020.

The already cash-strapped discoms are now in a dismal state given the loss of revenue from their highest-paying consumer segment. This has a direct impact on their ability to cross-subsidise low-income residential and agricultural consumers. Further, the billing and collection efficiency of discoms was hit adversely during the lockdown, widening the gap between the revenue realised and the cost of supply.

The revenue loss has also led to mounting discom dues to gencos. As per the Praapti portal, the outstanding dues as of end-June 2020 stood at Rs 1,147 billion vis-à-vis Rs 923 billion at the end of January 2020. In order to prevent the situation from worsening further, the central government launched the Rs 900 billion liquidity infusion scheme under the Atmanirbhar Bharat Abhiyan in May 2020. Under the scheme, loans will be extended to discoms by REC Limited and the Power Finance Corporation (PFC) at concessional rates to clear their liabilities to gencos.

Recently, in a major relief to IPPs, the Cabinet Committee on Economic Affairs has approved a one-time relaxation in the working capital limit norm for discoms under the Ujwal Discom Assurance Yojana (UDAY) to get loans as part of the Rs 900 billion liquidity infusion scheme. PFC and REC can now extend loans to the previous year’s revenues under UDAY.

A look at how Covid-19 has impacted discom finances…

As per various estimates, the power demand is likely to fall by 5-8 per cent during 2020-21, which will have a significant bearing on discom revenues and profitability. According to ICRA, the all-India electricity demand is likely to decline by 5-6 per cent in 2020-21 over the previous year. The agency has revised its earlier conservative estimate of 1 per cent de-growth made in April 2020. It is expected that the demand will decline by 3.5-4 per cent in the second and third quarters of 2021 and a marginal recovery of about 1 per cent is expected in the last quarter, given the slow pace of recovery in industrial and commercial activity. The consequent revenue gap for the discoms at an all-India level is estimated to increase further to Rs 420 billion-Rs 450 billion in 2020-21 as against the earlier estimate of Rs 200 billion. The recovery of this revenue gap, if allowed through regulatory assets by the state electricity regulatory commissions (SERCs), would require a tariff hike of 2.5 per cent to 3 per cent, assuming a three-year recovery period.

The audited book losses of discoms in 2018-19 at an all-India level have also been revised upwards to Rs 496 billion (as per PFC’s Report on Performance of Discoms) against the provisional estimate of Rs 280 billion. The losses have reached closer to the pre-UDAY level as discoms have not been able to reduce their AT&C losses as per expectations and there have been delays in the pass-through of cost to customers through tariff revisions.

Meanwhile, Emkay Global Financial Services estimates a steep year-on-year decline of 8 per cent in power demand during 2020-21. Further, the ACS-ARR gap in 2020-21 is expected to increase to Re 0.95 per unit from Re 0.50 per unit in 2019-20, translating into an under-recovery of Rs 1.12 trillion. The fall in demand is likely to result in a 13.1 per cent year-on-year decline in discom revenue to Rs 6.8 trillion. The demand from C&I consumers is projected to decline by 26.9 per cent, leading to a cross-subsidy charge loss of Rs 322 billion to the discoms.

Measures to alleviate the financial stress

With the relaxation allowed in the working capital limits, the state distribution companies will be able to secure more loans from PFC and REC to pay their power bills till June 2020. The one-time working capital limit relaxation will be valid for one year, and will help states that had hit the borrowing limit and were not able to avail of loans under UDAY. According to reports, Tamil Nadu is expected to be a key beneficiary of the move. Reportedly, TANGEDCO has sought a Rs 300 billion loan under the government’s liquidity package.

Meanwhile, PFC and REC have already sanctioned over Rs 600 billion worth of loans under the liquidity infusion scheme. Uttar Pradesh has sought the highest credit under the package so far at Rs 200 billion, followed by Telangana (Rs 120 billion), Karnataka (Rs 70 billion), Andhra Pradesh (Rs 60 billion) and Maharashtra (Rs 50 billion). In addition, Punjab, Rajasthan and Jammu & Kashmir have sought around Rs 40 billion each.

In another advisory issued by the power ministry, all gencos and transcos have been advised to charge a late payment surcharge at a rate not exceeding 12 per cent per annum (simple interest) on all payments made under the liquidity infusion scheme. The current applicable rate of late payment surcharge is quite high despite the fact that interest rates in the country have softened over the past few years. It goes up to 18 per cent per annum in some cases and has adversely impacted discoms. 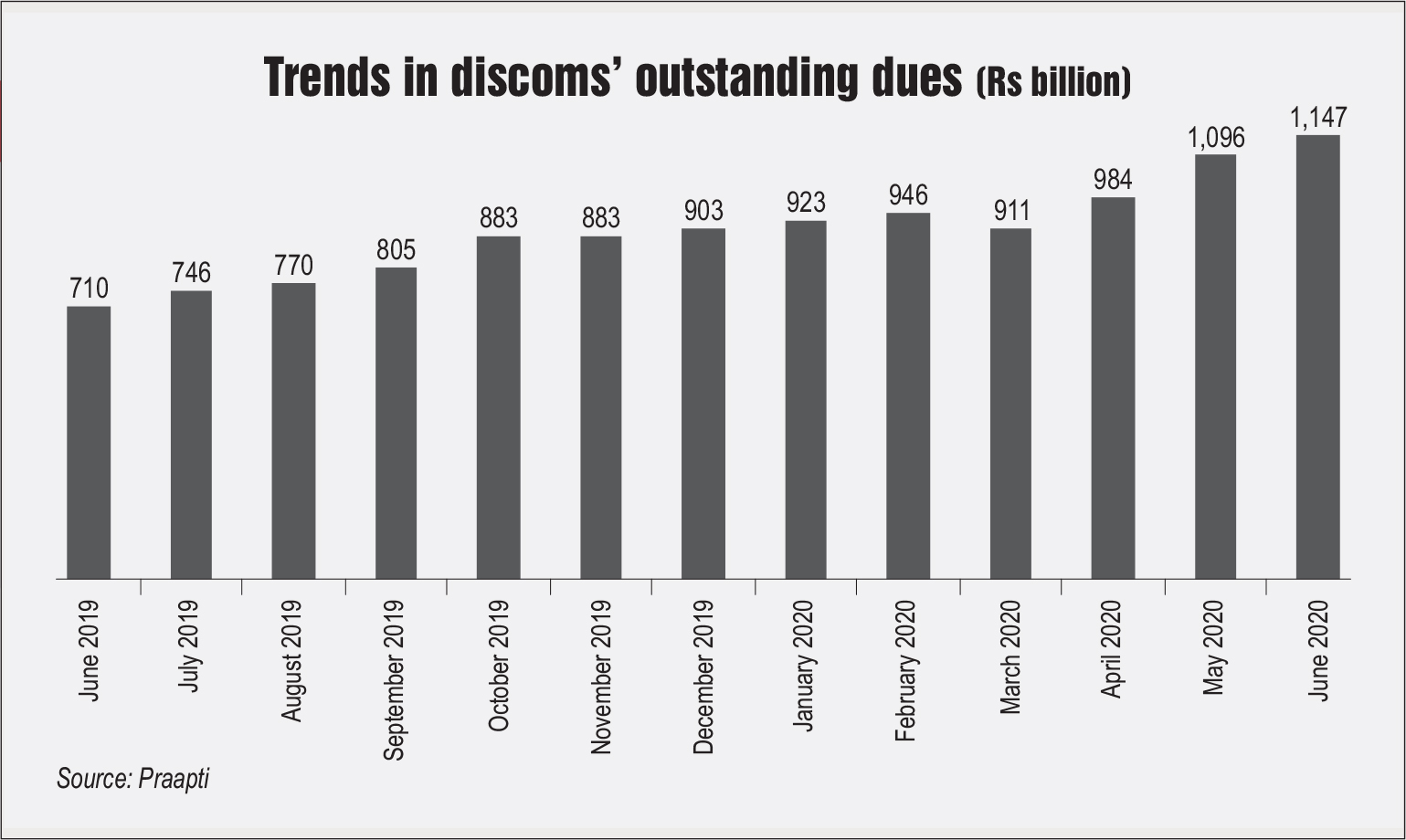 The discoms are undoubtedly going through tough times, but the power demand is likely to revive by 2022 with the improvement in economic activity. Apart from the measures being taken to alleviate the stress, the timely implementation of tariff hikes by the respective state regulators for reducing the revenue gap will be crucial for discoms. However, the SERCs are not likely to raise tariffs significantly to safeguard consumer interests as they are also reeling from the economic impact of the pandemic. For instance, the Haryana Electricity Regulatory Commission has not increased retail supply tariffs for any category of consumers during 2020-21 in view of the coronavirus pandemic. The two state discoms – Dakshin Haryana Bijli Vitaran Nigam and Uttar Haryana Bijli Vitaran Nigam – had filed supplementary annual revenue requirement petitions and estimated a revenue gap of Rs 64.35 billion (owing to the Covid-19 impact) as against the Rs 40 billion projected in the previous multi-year tariff petition. The discoms believe that the gap is provisional and is likely to change as the impact of Covid-19 cannot be assessed accurately.

Recently, the Delhi discoms have also submitted revised tariff petitions to the regulator seeking tariff hikes to tide over the current crisis. BSES and Tata Power Delhi Distribution Limited are likely to collectively face a revenue gap of Rs 61.24 billion in 2020-21 if power tariffs are not hiked.

Net, net, while the relaxation in working capital limits will help to address liquidity concerns and reduce the outstanding receivables of gencos, continued discom losses remain a challenge and would require long-term structural reforms.