The power sector is currently in the transition phase, moving from long-term contracts to short-term contracts. This transition can be attributed to changes in the industry structure, the growing interest of distribution companies in short-term contracts, rapidly declining energy costs with the addition of renewable energy, aggressive renewable energy targets and renewable purchase obligations, and efforts to improve the financial health of discoms. The short-term power trading market has emerged as a necessary tool for sellers, including merchant and stressed power plants, for maximising their revenues. For consumers, especially commercial and industrial (C&I) consumers, sourcing power through the short-term route results in significant cost savings by avoiding the high cross-subsidy charges imposed by discoms.

During 2019-20, the short-term trading volumes were recorded at 137.16 billion units (BUs), which accounted for 10 per cent of the total generation during the year. The remaining 90 per cent power was procured by discoms through long-term contracts and short-term intra-state transactions. The short-term market declined by 5.5 per cent in 2019-20 over 2018-19, when 145.2 BUs were traded. Since 2014-15, the volume of short-term transactions has grown at a compound annual growth rate (CAGR) of around 6.2 per cent. Meanwhile, power generation has grown at a much slower pace, at a CAGR of 4.6 per cent.

Of the total volume transacted in the short-term market during 2019-20, the volumes traded through trading licensees and power exchanges together accounted for around 63 per cent (86.4 BUs). In monetary terms, the size of this segment (excluding banking transactions) was Rs 318.2 billion in 2019-20, 26 per cent lower than that in 2018-19. The decline is mainly due to lower volumes transacted through traders and lower electricity prices in the power exchanges. During the first quarter of 2020-21, an aggregate volume of 30.76 BUs has been traded in the short-term market, which is 11.1 per cent of the total generation during the quarter.

During 2019-20, an aggregate volume of 56.45 BUs was transacted on the two power exchanges in the day-ahead market (DAM) and the term-ahead market (TAM), an increase of 5.5 per cent from the 53.52 BUs recorded in the previous year. Of the total volume traded, 49.16 BUs were traded in the DAM, while the remaining 7.29 BUs were traded in the TAM. The DAM is the electricity trading market for delivery on the following day, while the TAM allows the delivery of electricity up to a week.

In 2019-20, the majority of the day-ahead volume, 49.11 BUs, was traded on the country’s first and largest exchange, the Indian Energy Exchange (IEX). The IEX’s trading volume in the DAM grew at a CAGR of over 11.6 per cent from 2014-15 to 2019-20. Meanwhile, 0.05 BUs of the day-ahead volume were traded on Power Exchange India Limited (PXIL) during 2019-20. The major buyers in the DAM at the IEX were Central Power Distribution Company of Andhra Pradesh Limited, Bihar State Power Holding Company Limited, Reliance Energy Limited, the Chhattisgarh state discom and West Bengal State Electricity Distribution Company Limited. At PXIL, the biggest buyers in the DAM were Kerala State Electricity Board Limited and the Damodar Valley Corporation. In the TAM, a volume of 4.77 BUs was transacted on the IEX platform, while the remaining 2.52 BUs were transacted on the PXIL platform. 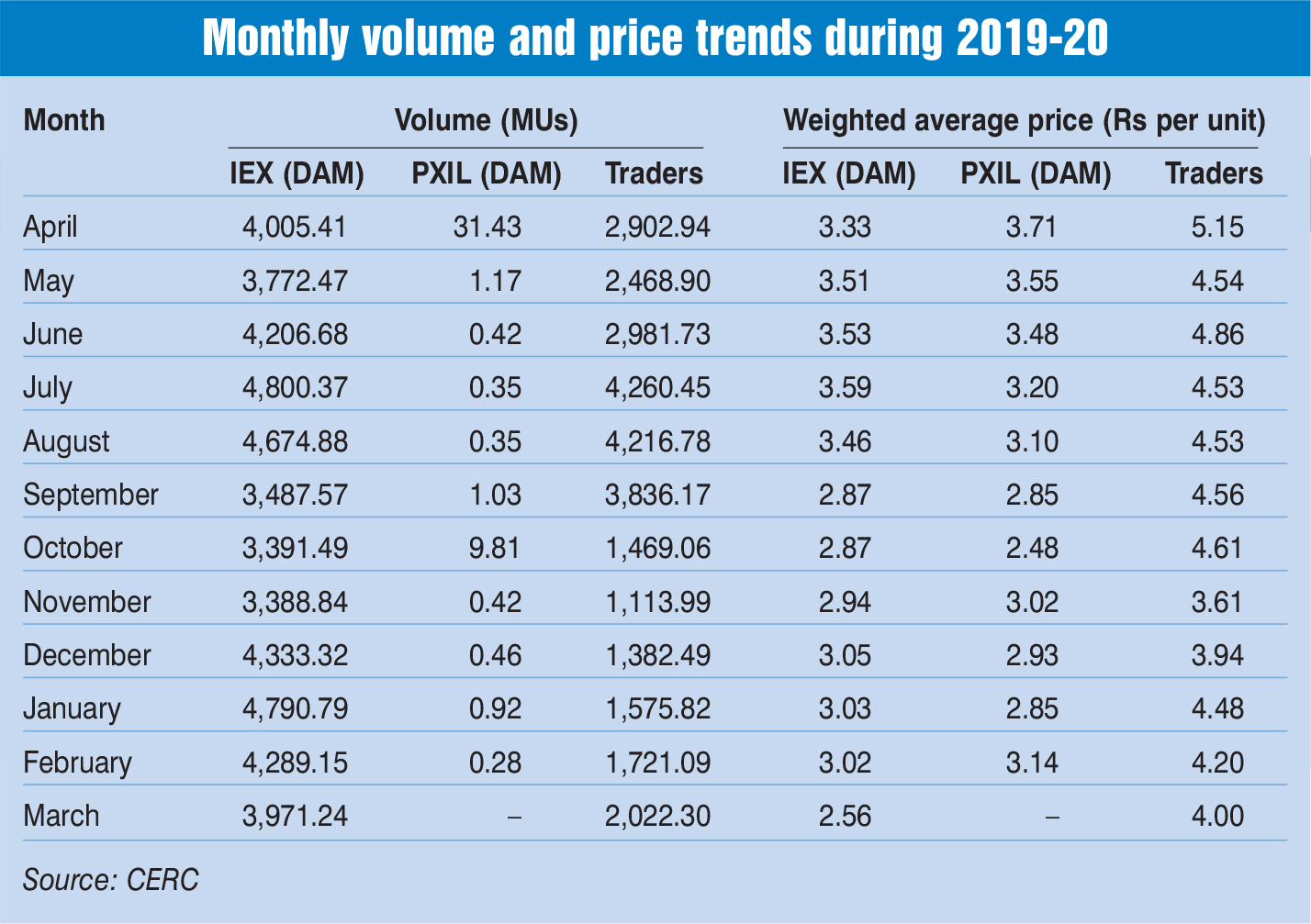 Since May 2020, however, the market has witnessed a significant surge, mainly owing to the increase in demand and consumption during summers. Increased consumption has been recorded particularly in healthcare institutions and households owing to work-from-home for corporate employees. Moreover, the easing of lockdown restrictions has enabled industrial and commercial consumers to get back to business, thus driving their consumption through open access. At the IEX, the volumes traded in the DAM stood at 5,574 MUs in May 2020, recording a significant 48 per cent year-on-year increase. The average market clearing price during the month stood at Rs 2.57 per unit, registering a 23 per cent year-on-year decline, from Rs 3.34 per unit in May 2019.

Real-time market: The RTM was launched by the IEX and PXIL in June 2020, allowing 48 sessions of half an hour each in a day, which means the trading of electricity is done round the clock and power delivery can be scheduled at intervals of one hour. The development has allowed utilities and open access consumers to manage power demand-supply variation and meet 24×7 power supply in a flexible, efficient and dynamic way. Trading in the RTM has exceeded market expectations, with the RTM trading volume at the IEX amounting to 2,161 MUs in the first three months. Month-wise, the market has seen rising volumes, with 515.46 MUs traded in June, 784.96 MUs in July and 860.57 MUs in August 2020. Around 242 customers participated in RTM trading during August 2020 at the IEX.

GTAM: Vide order dated August 17, 2020, the Central Electricity Regulatory Commission (CERC) granted approval to the IEX to launch the green term-ahead market (GTAM) on its platform. The IEX commenced trading in the GTAM from August 21, 2020 through intra-day and day-ahead contracts in both the solar and non-solar categories. Trading in daily and weekly contracts is expected to commence soon. The market has witnessed an encouraging response and registered a trade of 3 MUs in the first 11 days, with a total of 38 customers participating during the month. The key participants included the distribution utilities of Haryana, Daman & Diu, Dadra & Nagar Haveli; CESC; Tata Power Distribution Corporation; and open access consumers such as Amplus Green Power Private Limited, Jindal Stainless Limited and Dalmia Cement.

During the first quarter of 2020-21, 0.92 million RECs were transacted on the two power exchanges. Of these, 0.15 million were solar RECs while the remaining 0.77 million were non-solar RECs. In June 2020, the CERC issued a suo moto order and fixed the forbearance price at Rs 1,000 per MWh and the floor price at zero for solar and non-solar RECs. In July 2020, the Appellate Tribunal for Electricity postponed the trading of RECs scheduled in July 2020 by four weeks, after hearing appeals against the CERC order. In August 2020, the IEX and PXIL sought the reopening of REC trading, but it did not take place during the month.

In July 2020, the Ministry of Power approved electricity trading through forward and derivative contracts, subject to the outcome of a case in the Supreme Court. The development is indicative of the resolution of a decade-old jurisdictional conflict between the CERC and the Securities and Exchange Board of India (SEBI). SEBI is expected to oversee the functioning of all financially traded electricity forwards, while the CERC would regulate physically settled forwards, where electricity is delivered on a future date at the contracted price. Also, in July 2020, the CERC issued the draft Power Market Regulations, 2020, which proposed market coupling of power exchanges. As per the proposal, a uniform market clearing price would be discovered considering all types of bids from the power exchanges.

Meanwhile, in August 2020, the CERC approved the setting up of a third power exchange platform in the country, Pranurja Solutions Limited (promoted by PTC India Limited, along with BSE Investments Limited and ICICI Bank). In 2019, Pranurja Solutions applied for grant of registration to the CERC. PTC India and BSE Investments hold 25 per cent stake each in Pranurja, followed by ICICI Bank, which holds 9.9 per cent. The other shareholders are Greenko Energies (5 per cent), Jindal Power (2 per cent), Meenakshi Power (5 per cent), and six others.

Currently, the power trading segment is at the cusp of transition, moving towards greater competition. It is also witnessing the introduction of new kinds of products. However, tariff-related barriers such as high cross-subsidy charges levied by discoms need to be dealt with by the state regulators in order to encourage consumer-level participation in the short-term power market. The recently issued draft Draft Electricity (Amendment) Bill, 2020, which outlines key amendments pertaining to open access charges, promotion of renewable energy, etc., is expected to address some of the issues faced by consumers. Going ahead, the changing dynamics are expected to make the power trading market more vibrant and promote greater efficiency.