Two big obstacles in the widespread adoption of electric vehicles (EVs) are cost and driving range. But steady advancements in battery technology are helping mitigate both issues, and could make electric cars more affordable and acceptable among consumers within a few years. Between 2010 and 2019, as noted by the BloombergNEF battery price survey, the weighted prices have fallen by 87 per cent, considering that the batteries per kWh cost about $1,100 in 2010 and around $156 in 2019. This trend is extrapolated to continue until 2024, conditional to the doubling in volumes supplied, leading to a halving of the price owing to learning curve effects. A look at the key trends in the battery technologies’ segment…

Battery technologies generally comprise lithium-ion (Li-ion) batteries, redox flow batteries and solid state batteries. The patents filed in this segment demonstrate that in the past two decades, about 16,500 Intellectual Property Families (IPFs), with 90 per cent of them concerned with batteries related to electricity storage and there has been a 14 per cent compound annual growth rate (CAGR) in the number of filings from 2005 to 2018, which is substantially superior to the 3.5 per cent on average CAGR for all IPFs at large. This points to a rapid acceleration in research and development (R&D) in this field. In addition, in the past one year, about 7,000 IPFs were filed, indicating that there is monumental research that is being undertaken in this segment. Much of this research is concentrated on the development of Li-ion batteries, closely followed by solid state batteries.

Fundamentally, there are three to four different technologies in the battery storage segment, which may revolutionise this segment.

Li-ion batteries: Li-ion batteries have dominated this market for a long time. These batteries have been very promising and have witnessed several iterations so much so that they are currently being utilised in most of the EVs including Tesla, BYD, etc. The major li-ion battery manufacturers include BYD company, LG Chem (supplying to Renault, GE and Hyundai) and Panasonic Corporation (supplying to Tesla). Moreover, in 2020, it was announced that Peugeot and Total SA would be collaborating to produce Li-ion batteries possessing a capacity of 48 GWh by 2023.

Lithium sulphur batteries: Li-ions are stored in active materials serving as stable host structures during charging and discharging. In lithium-sulphur batteries, there are no host structures. While discharging, the lithium anode is consumed and sulphur transformed into a variety of chemical compounds; and during charging, the reverse process takes place. This technology combines the best of both Li-ion batteries and solid state batteries and hence they are lightweight and, high density and have very long life cycles. 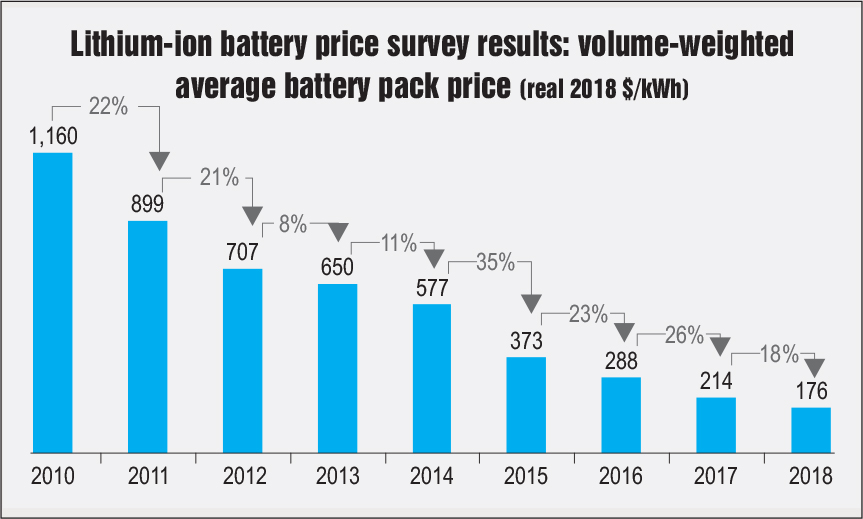 Although Covid-19 has devastated the world in 2020, the stock market has achieved new highs on account of the infusion of substantial liquidity and the quantitative easing policy followed by central banks all over the world.

Consecutively, this has led to the launch of several initial public offerings (IPOs) this year and several more slated to enter the market, including Hylion Holdings, Nikola, Xpeng and NIO. The US companies are trading at several times their actual book value, on a premium, despite not having sales to back up. Fundamentally, this indicates that the US IPO market for auto companies is extremely optimistic about EVs and their sales in the forthcoming years.

Considering that significant advancements in the automobile segment trace their origin to R&D in the EV sector, where batteries account for 33 per cent of the costs, it is likely that these companies trading several times over their valuation will actually propel the battery storage segment to unprecedented levels as has been observed during the dot-com bubble in the 2000s, which later contributed to a massive spurt in the development of internet technologies, while concurrently spurring enormous innovation in this sector, although financially it was not sustainable because of the overvaluation. Eventually, these technological  developments will be rapidly integrated in the EV sector, furthering their adoption.

In sum, battery storage is at a tipping point, beyond which it is poised to attain strong growth owing to its utilisation and application, at an affordable rate, in both the EV space and the electricity sector.