Growing urbanisation has led to space constraints in most parts of the country, necessitating the installation of more compact transmission lines. To this end, various advancements are being made on the technological side in the transmission conductor industry. These advancements are aimed at increasing the power transmission capacity of conductors, and thereby minimising the right-of-way (RoW) requirement. Further, new conductors are being deployed for carrying higher currents and allowing higher temperature ratings. Also, the need to upgrade and expand the electric grid to cater to the growing influx of renewable energy is one of the drivers for the adoption of advanced conductor technologies.

A look at the technology trends in the conductors market…

High temperature low sag (HTLS) conductors are characterised by high temperature resistance and greater ampacity than conventional conductors. They are capable of continuous operation above 100 ºCelsius and do not sag at higher temperatures. Even above the “knee point temperature”, all the stress of the conductor is borne by the core and hence the sag remains constant. Further, the usage of thermal resistant aluminium alloy or fully annealed aluminium (1350-O) enables high temperature operation without the loss of strength and lower sag. HTLS conductors have 30 per cent more capacity than conventional conductors. Further, the low sag feature reduces the tower requirement.

The common materials used for making HTLS conductors include INVAR steel (iron and nickel [Fe-Ni] alloy), aluminium-zirconium alloys, annealed aluminium, high strength steel, and metal and polymer matrix composites. HTLS conductors are composed of a combination of aluminium and alloy wires for conductivity and are reinforced by core wires. The main drawback of HTLS conductors is their high cost, which is two to three times more than the cost of ACSR and AAAC conductors. In addition, there are limitations posed by surge impedance loading and greater losses in long transmission lines deploying HTLS conductors. Further, these conductors require non-conventional methods of stringing and a skilled workforce for operations and maintenance. The utilities have also raised concerns regarding the material behaviour, long-term performance and life expectancy of HTLS conductors.

The first HTLS project in India was implemented by Power Grid Corporation of India Limited (Powergrid) for the line-in line-out of one circuit of the 400 kV double-circuit (D/C) (quad) Dadri-Ballabgarh transmission line at Maharani Bagh, wherein it deployed INVAR-type HTLS conductors. At Powergrid, 34 transmission line reconductoring and new projects (with existing tower design) use HTLS conductors at the 132 kV, 220 kV and 400 kV levels. The four types of HTLS conductor technologies that have been adopted are INVAR, GAP, aluminium conductor composite core and aluminium conductor steel supported (ACSS). A large part of the installation is being undertaken in the eastern region of the country. Powergrid is also using HTLS conductors for forest corridors and other RoW-constrained areas. 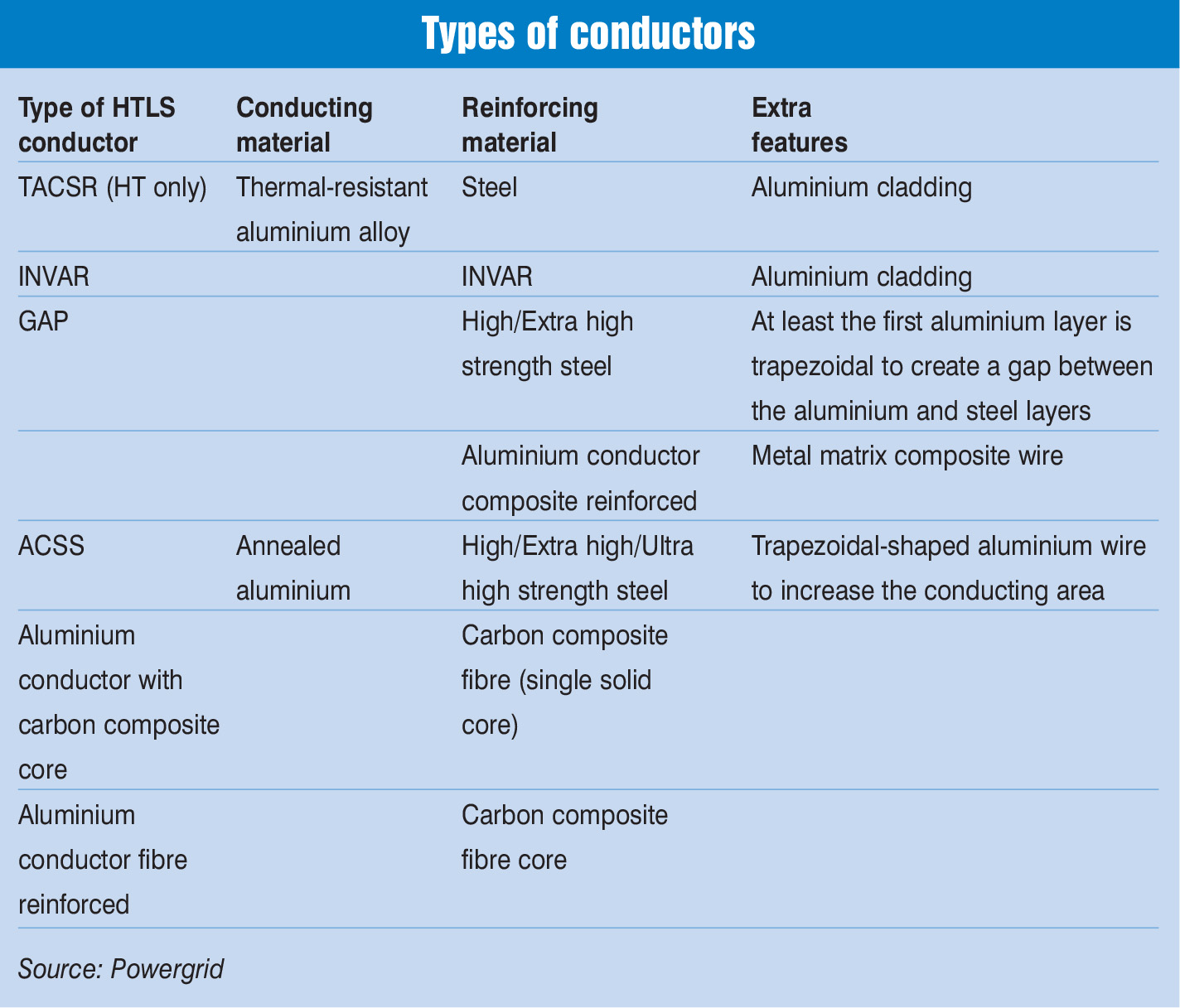 INVAR: INVAR-type conductors are similar to ACSR conductors with respect to their construction, handling and stringing. The aluminium strands can be made thermal resistant by either having fully annealed aluminium or by adding zirconium to obtain a thermal-resistant aluminium alloy. The core is galvanised and is made up of iron and nickel (Fe-Ni) with a low thermal coefficient of expansion, which is approximately one-third that of steel. At higher temperatures, that is beyond the transition temperature, all load is transferred to the core. Hence, the conductor has lower sag as compared to an ACSR conductor. It can be operated at a temperature of up to 200 ºCelsius.

ACSS conductors: These conductors, which were widely used by American utilities, are similar to ACSR conductors, except that the external strands are aluminium annealed. The aluminium used is pure and hence ductile and soft, which is why the conductor requires more care during handling and stringing. The core is made up of high strength steel and carries most of the load. Hence, the sag is less compared to a conventional ACSR conductor under high temperature. This conductor can also be operated at 200 ºCelsius without the loss of strength.

GAP conductors: This is another type of HTLS conductor with a core of steel and aluminium strands. A small gap is maintained between the galvanised steel core and aluminium strands. It is strung by tensioning the steel core and hence has lower sag as compared to an ACSR conductor. This too can be operated at temperatures of up to 200 ºCelsius, but it requires special erection techniques while stringing.

Carbon fibre composite core conductors: This kind of HTLS conductor is fully aluminium annealed and the core is made of composite material like glass fibre and carbon. The conductor has less sag due to a low coefficient of thermal expansion and can be operated at temperatures of up to 180 ºCelsius. However, it requires special types of dead-end clamps and joints as well as more care while handling and stringing due to the softer aluminium strands. It is able to carry approximately twice as much current as a conventional ACSR cable of the same dimensions. As a result, it is used mostly for retrofitting the existing electric power transmission line without the need for a change in the existing towers and insulators.

XLPE cables use cross-linked polyethylene as the main insulating material. Cross-linking inhibits the movement of molecules under the stimulation of heat and this gives these cables greater stability at high temperatures, as compared to thermoplastic materials. XLPE cables can operate at higher temperatures, both under normal loading and short-circuit conditions. These cables have a higher current rating than an equivalent polyvinyl chloride cable.

XLPE-insulated cables are useful in direct current (DC) power transmission. Traditional DC power cables include oil-filled or mass impregnated non-drain cables that have limitations for long distance power transmission. While the former requires frequent oil refilling, the latter type suffers from low operating temperature. Extruded XLPE cables are increasingly being deployed in new underground transmission throughout the world. Extruded XLPE cables have a high transmission capacity, which is not limited by the route length. Powergrid is also deploying 320 kV DC XLPE cables for its Pugalur-Trichur HVDC project. The cable will be partially underground and partially overhead. HVDC extruded XLPE cables can be easily laid in deep oceans as well as on rough terrain over long distances. 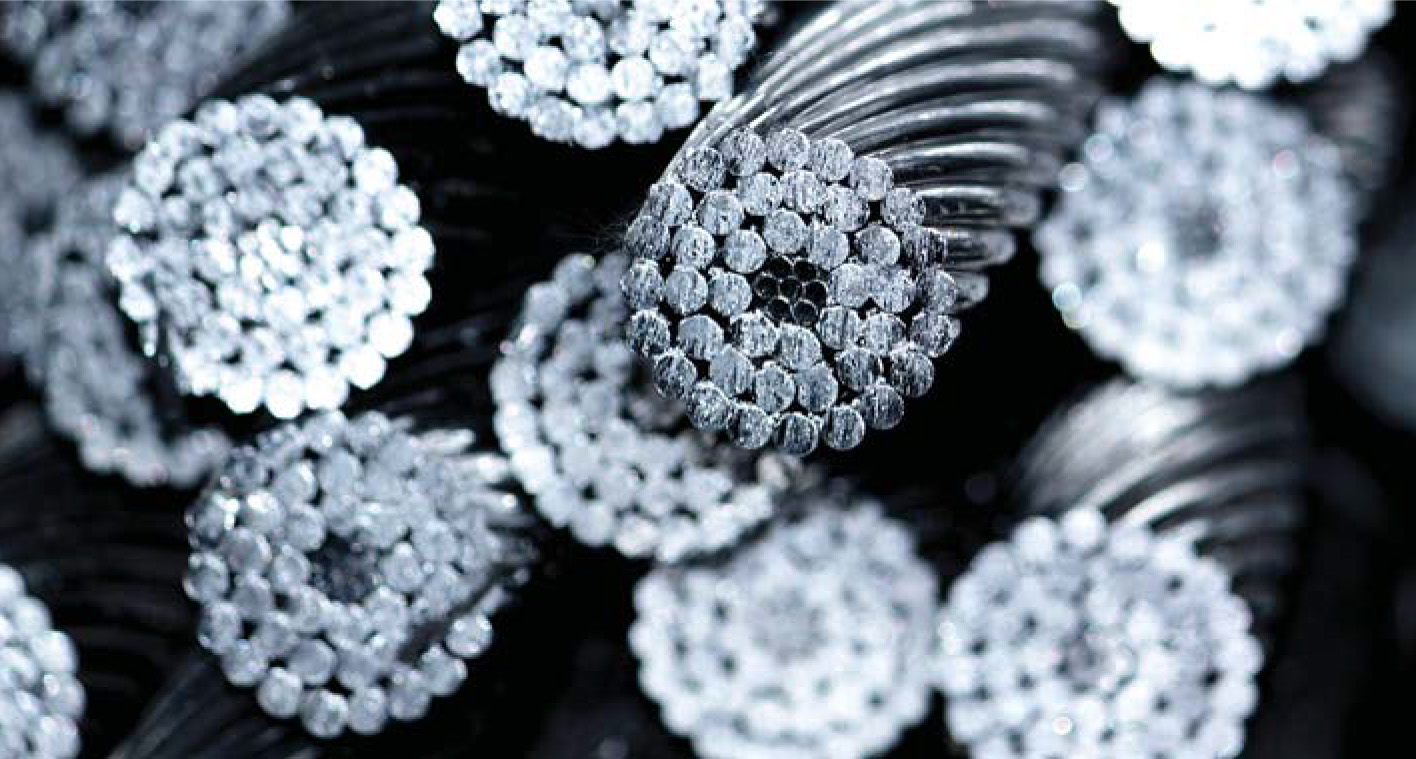 High temperature superconductors (HTSs) consist of several strands of superconducting wire wrapped around a copper core, and a cryogenic cooling system to maintain proper operating conditions. These conductors have the capability to carry five to ten times the current carried by conventional conductors. They can transfer more power using the same towers and line corridors. Further, HTS-based devices including cables, fault current limiters, transformers and energy storage solutions can limit over-currents and protect the grid from damage.

They are compact in size and have a lower RoW requirement. Therefore, HTSs can be installed in dense urban areas with a high load requirement with the existing RoW. They can also be used to connect two existing substations to create redundancy when transformer addition is not feasible. In addition, the transmission losses associated with HTS are one-fourth of conventional copper/ aluminium conductor losses. Also, electromagnetic radiation is suppressed by the HTS shield. These conductors can operate at a wide voltage range of 5-765 kV, and have lower impedance than conventional conductors.

At present, HTSs are largely deployed by global utilities, and not on a large scale. In 2014, RWE Deutschland, Nexans and KIT installed HTSs as part of the AmpaCity project in Germany, which was aimed at deploying the world’s longest superconductor system to replace the inner-city high voltage cables. In India, Powergrid is considering a demonstration project on the 220 kV HTS cable system in the grid for assessing feasibility and operational issues. A successful HTS cable system will facilitate higher power transmission without erecting towers.

GILs are a good alternative to overhead lines where RoW is not available for the transmission of electricity. They can be installed under the ground as well as in tunnels or trenches. These lines are ideally suited for metropolitan areas and cities where there is limited RoW for overhead lines. Underground GILs can also be installed in agricultural areas, leaving the ground viable for growing crops. The installation of vertical GILs is popular in hydropower plants as there is no fire hazard associated with them.

GILs come with several benefits. First, the resistive losses of GILs are lower than of overhead lines and other types of underground cables due to the larger size of conductors and lower resistance. Second, these lines offer greater reliability with no risk of fire and have electromagnetic fields that are 15-20 times smaller than those of conventional power transmission systems. Last, GILs are unaffected by high temperatures, high solar radiation and pollution.

Although GILs have been deployed by several global transmission and distributions utilities, there are not many examples of GILs in India. The North Chennai thermal power plant has a 1.5 km GIL supplied by the erstwhile Areva T&D in 2010. Issues related to GILs include deterioration in insulation properties owing to particle contamination and limited protection from seismic activities/earthquakes (in the case of underground lines) and limited maturity of the technology.

Going forward, the adoption of advanced conductor technologies is expected to be driven by several factors such as growth in power demand, scarcity of land for the construction of new transmission lines, increase in public opposition, adoption of renewable power sources in far-flung areas requiring higher capacity transmission lines, and the need for more environment-friendly technologies.