In India, coal/lignite-based thermal power plants (TPPs) are the backbone of power generation and hence, generation of large amounts of fly ash is a common phenomenon. Additionally, Indian coal is of a lower grade with high ash content (30-45 per cent) as compared to imported coal, which has a lower ash content (10-15 per cent). The fly ash thus generated is a source of both air and water pollution.

A report on fly ash generation and utilisation at coal/lignite-based TPPs in the first half of 2019-20 (April-September 2019), published by the Central Electricity Authority (CEA), reveals that 129.09 million tonnes (mt) of fly ash was generated during this period, of which 100.94 mt has been utilised. The percentage utilisation rate was around 78.19 per cent, which was a significant improvement over the previous year’s 68.72 per cent. Over the years, the utilisation rate of fly ash in TPPs has improved. However, it is still below the mandate of the Environment Protection Act, which requires 100 per cent utilisation of fly ash. 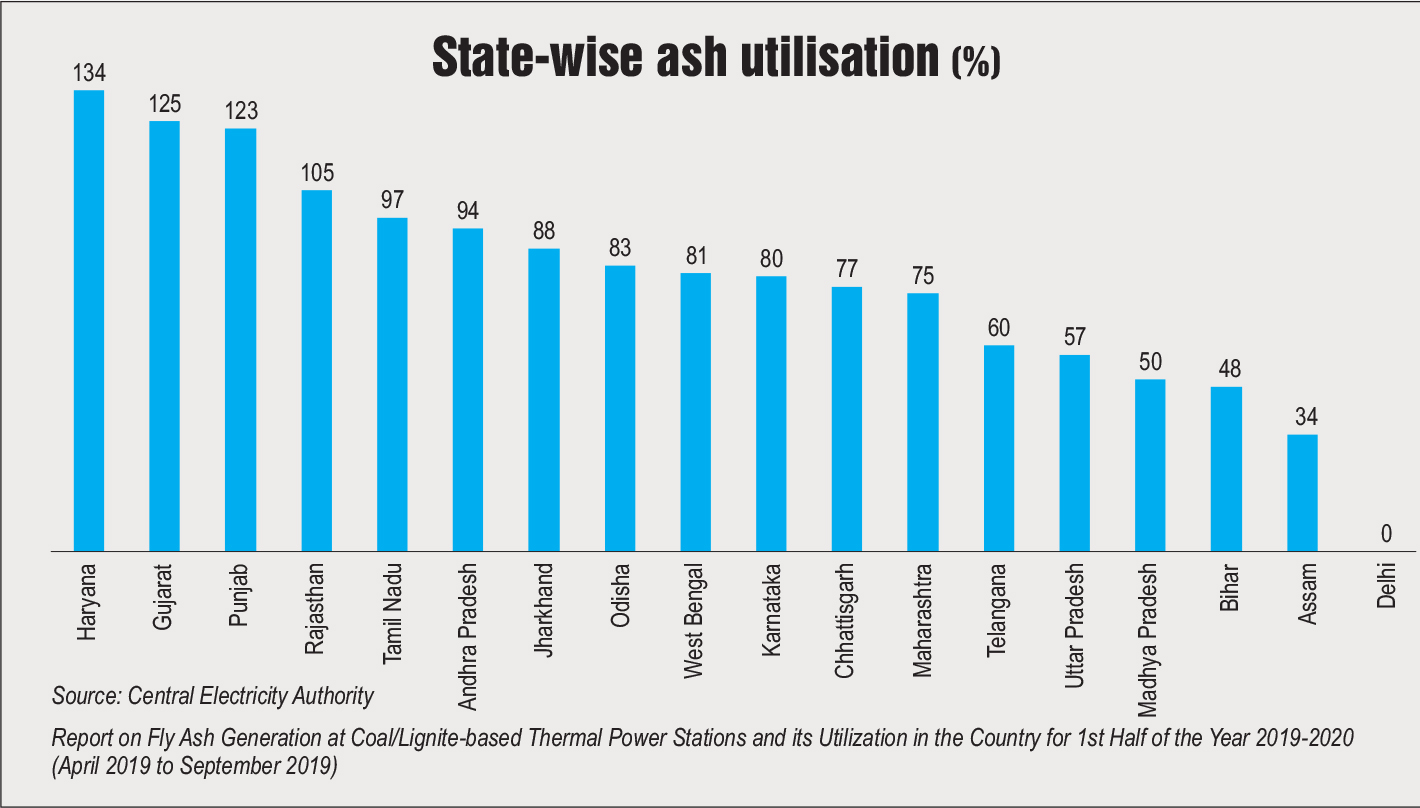 The Ministry of Environment, Forest and Climate Change (MoEFCC) issued the first directive for promoting fly ash utilisation in the country in September 1999. It has since been amended several times. In the latest amendment, notified in January 2016, the ministry mandated 100 per cent fly ash utilisation by TPPs by the end of December 2017. In addition, it specified that power plant developers would bear the entire cost of ash transportation up to a 100 km radius. For distances greater than 100 km and less than 300 km, the developer would share the cost equally with the user or the construction agency. Further, the amendment directed TPPs to set up, or assist in setting up, manufacturing facilities for ash-based products on their premises, so as to minimise the transportation of fly ash. The notification also suggested making use of fly ash-based products for all government schemes, such as the Pradhan Mantri Gram Sadak Yojana, the Mahatma Gandhi National Rural Employment Guarantee Scheme and the Swachh Bharat Abhiyan. It advised the Ministry of Agriculture and Farmers’ Welfare to consider using fly ash as a soil conditioner.

Despite various efforts and mandates by the government, the majority of TPPs have not been able to comply with the 100 per cent fly ash disposal target. The states sought a time extension of two to five years to meet the 100 per cent utilisation target. However, their request was rejected by the National Green Tribunal (NGT), as any extension in time would have conflicted with the mandate under the Environment (Protection) Act, 1986 – especially when such an extension could harm the environment. In February 2020, the NGT directed TPPs to take prompt action for the scientific disposal of fly ash, warning that failure to do so would entail a penalty. The tribunal stated that non-compliant plants would have to pay environmental compensation, effective from the cut-off date of December 31, 2017. In the latest hearing, in November 2020, the NGT has directed the Central Pollution Control Board (CPCB) to determine the amount of compensation to be levied on TPPs that are not utilising fly ash. The environment ministry and the CPCB have also been directed to file further status reports on the state of compliance.

Meanwhile, in May 2020, the MoEFCC amended the Environment Protection Act, 1986 to do away with mandatory coal washing for supply to TPPs. Previously, power stations located within a 500-1,000 km of a pithead or coal mine were stipulated use of coal with ash content not exceeding 34 per cent, on a quarterly average basis. The new notification allows the use of coal by TPPs without stipulations regarding ash content or plant location, subject to certain conditions. For the management of ash ponds, as per the new rules, TPPs will comply with the conditions outlined in the fly ash notifications, without setting up additional ash ponds for switching from washed coal to unwashed coal. Further, TPPs will dispose of fly ash in abandoned or working mines (to be facilitated by the mine owners) with environmental safeguards. Appropriate technology solutions will be applied to optimise water consumption for ash management. The segregation of ash may be done at the electrostatic precipitator stage, if required, based on site-specific conditions, to ensure maximum utilisation of fly ash. 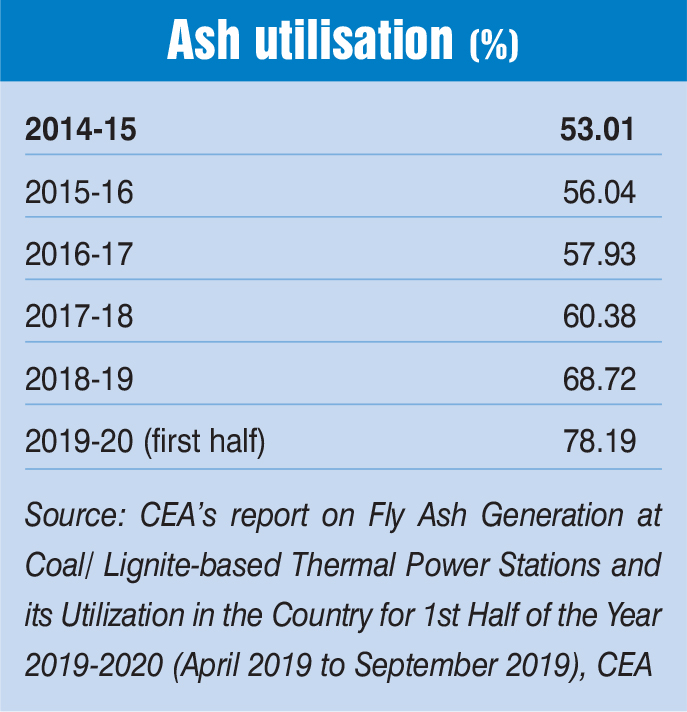 Of the 18 states that were studied, Gujarat, Haryana, Punjab and Rajasthan have achieved greater than 100 per cent fly ash utilisation, with Haryana being the highest at 134 per cent. The maximum amount of fly ash – more than 20 mt – was generated in Chhattisgarh, while Madhya Pradesh, Maharashtra, Odisha, Uttar Pradesh and West Bengal each generated more than 10 mt of fly ash. 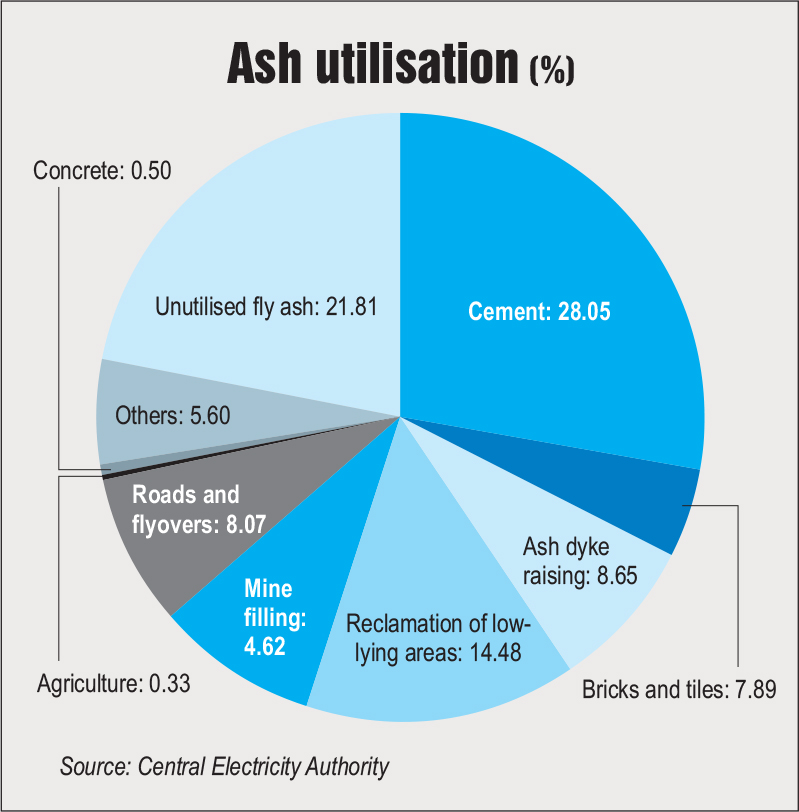 The largest utiliser of fly ash in India is the cement industry. The ash is used as an essential element in many products such as poured concrete, concrete blocks and bricks. It is most commonly used in portland cement concrete, substituting normal portland cement. This improves the strength of the concrete, reduces segregation, and makes it easier to pump. It also provides greater workability and impermeability, and makes the concrete resistant to moisture and harmful gases. At the same time, it lowers the water requirement for the same concrete consistency. 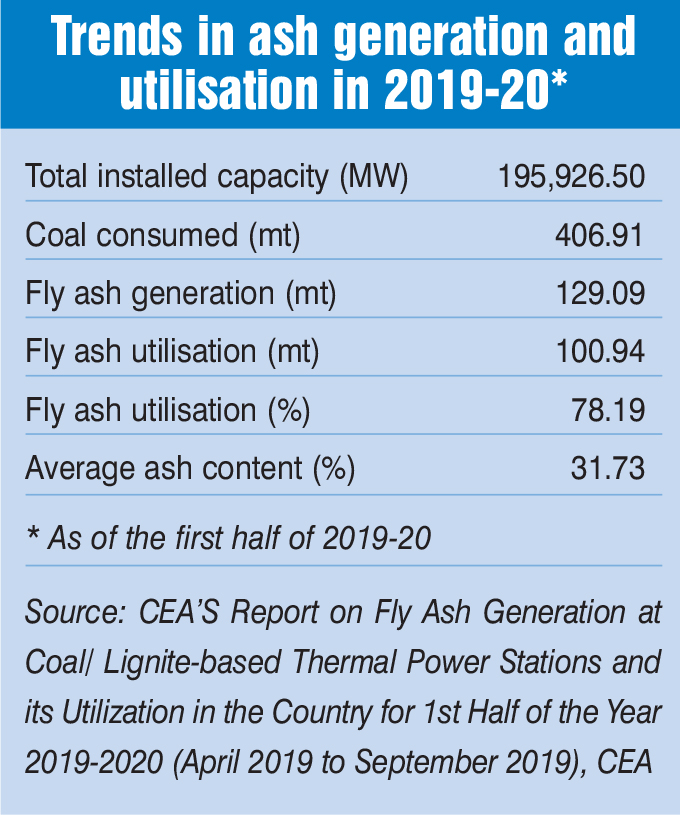 Fly ash, along with sand and ordinary cement or lime and gypsum, can be used to produce bricks. A single such brick requires approximately 1.25 gm of fly ash. These bricks have three times more strength than clay bricks. Their production also requires less energy, making them an environment-friendly product. During 2019-20, NTPC’s stations produced about 45.4 million fly ash bricks. NTPC townships at Simhadri, Sipat, Faridabad and Talcher-Kaniha have been constructed exclusively with fly ash bricks.

Fly ash can be used for the construction of roads, embankments and flyovers. The utilisation of fly ash in these projects makes it environment friendly, as it replaces the conventionally used topsoil. As a result, it also prevents the creation of low-lying areas due to soil excavation. The high permeability of fly ash ensures free and efficient drainage.After successfully laying roads with a geopolymer substance made with 90 per cent fly ash content in a research project, NTPC-Ramagundam has now developed geopolymer coarse aggregates as a replacement for the natural aggregates used in building construction.