India has achieved a 100 per cent household electricity connection rate. However, providing reliable quality power on a regular basis is an ongoing challenge and an evolving process for the Indian power sector. In order to map and assess the capacity of the electricity distribution utilities to service customers’ needs and meet ambitious electricity access targets, a report, “Status of Electricity Access and Benchmarking Utilities”, has recently been released by NITI Aayog in partnership with the Rockefeller Foundation and Smart Power India.

The study has launched the first ever India-specific framework for a comprehensive measurement of electricity access. It condenses findings from one of the largest ever surveys on electricity access, following the completion of the government’s programme on household electrification – Pradhan Mantri Sahaj Bijli Har Ghar Yojana (Saubhagya). 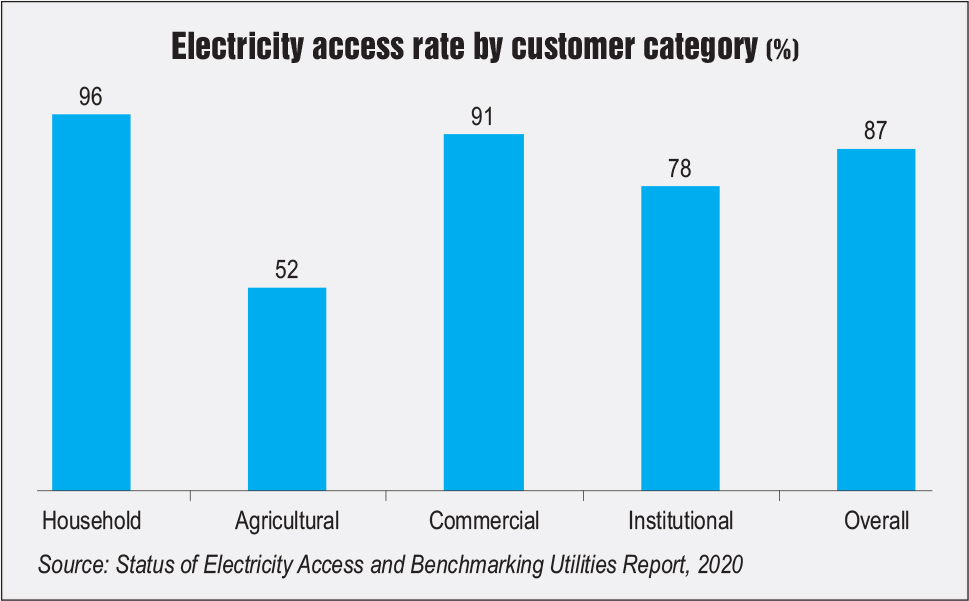 The key findings of the report include that there has been a significant improvement in the hours of supply across customer categories to nearly 17 hours per day; 85 per cent of customers reported a metered electricity connection; 83 per cent of household customers had access to electricity; and 66 per cent of those surveyed were satisfied (of which 74 per cent were urban customers and 60 per cent were rural).

At the launch of the report, NITI Aayog vice-chairman Rajiv Kumar said, “The report highlights the benefits of government-led schemes such as Saubhagya and the Deendayal Upadhyaya Gram Jyoti Yojana, which have been well received in rural as well as urban areas. Some of the recommendations – such as prioritising the release of new connections for non-household customers, transferring subsidies or other benefits directly into a customer’s account, enhancing technology-driven customer service, ensuring 100 per cent metering of customers, and segregating feeder lines – are all part of ongoing government programmes, but we would like the concerned ministry to expedite these to maximise the benefits.” A closer look at the main observations of the study…

The study is based on a primary survey conducted across 10 geographic states – representing 65 per cent of the total rural population of India and with a sample size of more than 25,000, including households, commercial enterprises and institutions – and the report assessed 25 distribution utilities. The study used a mixed design approach that has synthesised primary customer research and secondary research on the electricity distribution utilities serving these customers. On-ground observational surveys of substations and feeders further supplemented the understanding of key infrastructure challenges. Some of the major parameters of the study include the following.

The parameters to deliver sustainable electricity access are characterised by discoms’ internal capacity, which, in turn, are governed by  infrastructural, operational and institutional capacities.

Further, the study recommends the implementation of direct benefit transfer for establishing a streamlined, on-time and proactive subsidy transfer to consumers. It aims to initiate public outreach campaigns that increase customer awareness and ensure completion of KYC by utilities. Besides, it recommends enhancing the reach of banking or incorporate non-banking channels for subsidy disbursement in rural areas.

Some of the other recommendations made in the report include tariff rationalisation and simplification, setting realistic efficiency benchmarks for utility performance, strengthening institutions such as electricity regulatory commissions by upskilling to enable advanced data and policy analysis, strengthening customer engagement through deployment of standard operating procedures, providing enhanced technology-driven customer service, ensuring 100 per cent metering of customers and segregating feeder lines.

The above recommendations will provide a way forward for policymakers and distribution utilities to prioritise interventions. An alternative way forward may be explored through leveraging private sector actors, better capacity planning and deployment of new technology, which will establish more robust structures and hence, assure greater efficacy for implementing the recommended solutions.