The recent coal mining auction, held in November 2020 under the commercial coal mining policy, saw aggressive bidding by domestic players, with 19 blocks being successfully auctioned, which are expected to generate total revenues of around Rs 70 billion per annum.

The auction process for commercial coal mines was launched on June 18, 2020. The coal ministry released a list of 41 coal blocks to be auctioned, with geological reserves of 17 billion tonnes and a peak rated capacity of 225 million tonnes per annum (mtpa). The auctions were conducted in two rounds – technical and financial. A total of 76 valid bids were received for 23 coal blocks out of the revised list of 38 coal blocks by the end of the technical round on September 29, 2020. In the financial round, bids were received for 19 mines.

Notably, global mining giants such as BHP Billiton, Rio Tinto and Glencore did not participate in these auctions (largely because these companies are gradually withdrawing from the coal industry as businesses are moving towards cleaner fuels). Also, the bidding process saw participation from sectors like real estate, infrastructure and pharmaceuticals instead of the mining, power and clean coal sectors.

The commercial coal mining auction also marked the first set of coal assets to be auctioned through the new market-determined revenue share model, replacing the fixed fee per tonne regime. The condition of prior experience for prospective bidders was also removed to attract investors.

Of the successfully auctioned mines (see Table), 11 are opencast, five are underground mines and the remaining three are a mix of underground and opencast mines. These mines are spread over five states – Madhya Pradesh, Chhattisgarh, Odisha, Jharkhand and Maharashtra – and have a consolidated peak rated capacity of 51 mtpa. Despite apprehensions over the timing of the auctions owing to the Covid-19 pandemic, the mines witnessed fierce competition and companies offered significant premiums. The highest premium remained at 66.75 per cent, whereas the average premium remained at 29 per cent.

Almost 65 per cent bidders were from the non-end-user categories like real estate, infrastructure and pharma given the removal of the end-use criterion from the bidding process, which is a positive development for the industry. Some of the large corporate groups that have secured blocks in the 19 mines are Adani Enterprises, Vedanta, Hindalco Industries and Jindal Power. A total of 42 companies participated in the auction, of which 40 were private players while two were PSUs – NALCO and Andhra Pradesh Mineral Development Corporation Limited (APMDC). Of the two PSUs, only APMDC won a block, Brahmadiha, at a premium of 41.75 per cent, against five private companies.

State/UT-wise, the Jharkhand government, which had filed a writ petition challenging the timing of the auction, is expected to garner a maximum revenue of Rs 26.9 billion, followed by Madhya Pradesh (Rs 17.24 billion), Odisha (Rs 10.59 billion), Chhattisgarh (Rs 8.42 billion) and Maharashtra (Rs 3.21 billion). In total, the states are expected to garner a total revenue of around Rs 70 billion annually. 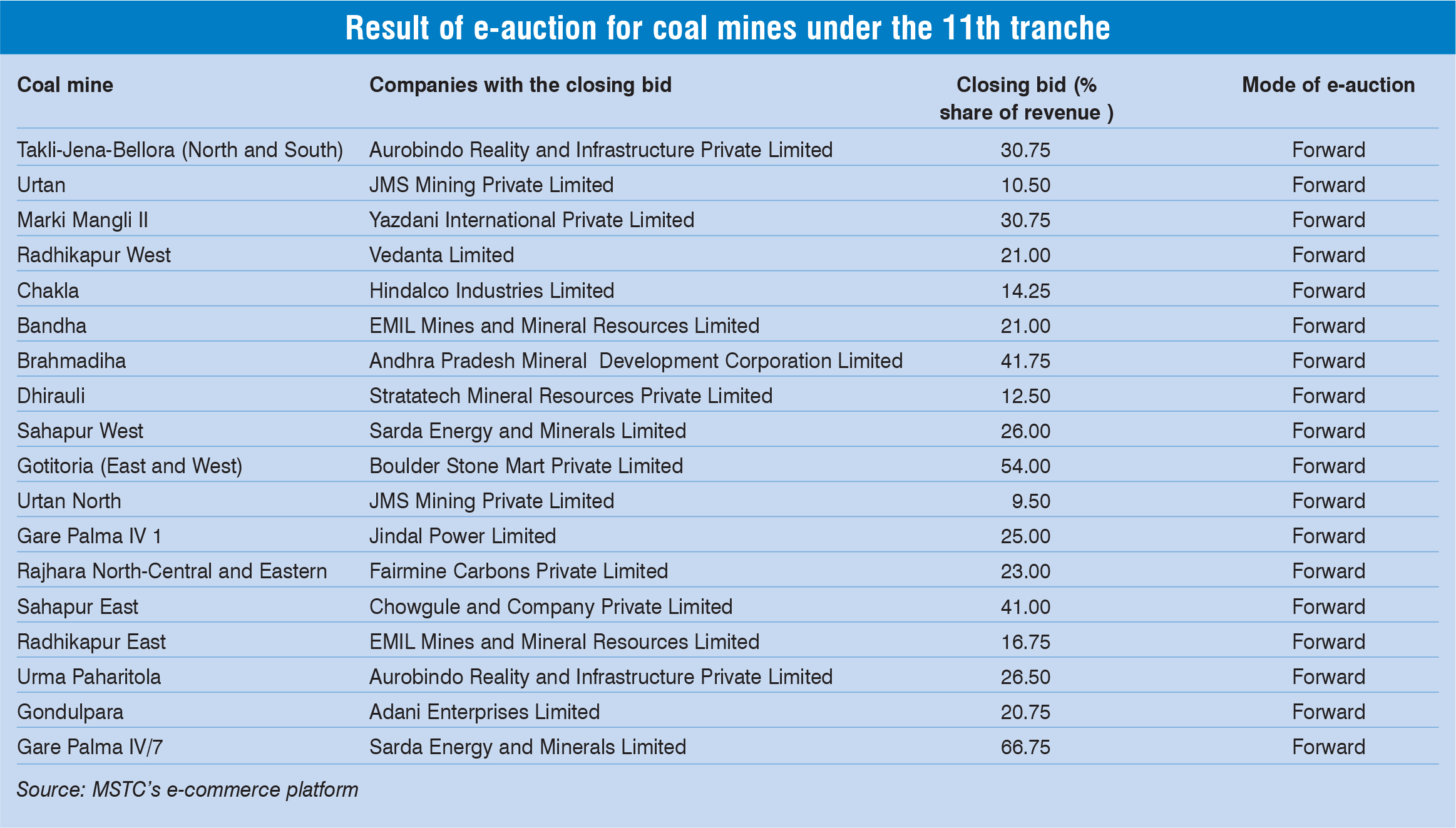 Recently, the coal ministry has again invited bids for four coal blocks. The tender process for these blocks was annulled in the first round of auction for commercial mining as there was just one technically qualified bidder for each mine. Hence, a second attempt at the 11th tranche of auctions will be undertaken in January 2021 for the Chendipada, Chendipada II and Kuraloi (A) North coal mines in Odisha and Seregarha block in Jharkhand. These blocks are fully explored and have an annual peak rated capacity of 52 mt and are expected to see greater participation.

Net, net, stakeholders believe that the coal mine auction will help create a marketplace for coal with multiple producers, thus driving competition and bringing efficiency through the adoption of best practices in mining and environment management. Further, ease of doing business factors such as land acquisition and environmental clearances also need to improve simultaneously. This will depend on the cooperation of the states with the commercial mine allottees to facilitate the early operationalisation of the blocks. Of the 35 coal mines auctioned successfully in the past 10 tranches of the auction, only 14 blocks could begin operations. According to Credit Suisse, it could take new owners four to five years to start production, unless the government fast-tracks clearances. Going forward, addressing these issues will create a positive atmosphere and increase investor confidence.