Incorporated in 1995, Triveni Turbine Limited (TTL) has grown over the years and is today one of the key steam turbine manufacturers in the country in the 5 MW to 30 MW segment. The company has a 60 per cent share in the Indian market and has, till date, supplied turbines aggregating 13 GW in over 70 countries. In fact, the company has continued to delivere a resilient performance even amidst the Covid-19 crisis.

2019-20. Along with cost leadership, our product development and innovation capabilities have helped us maintain our margins during the last financial year.”

TTL manufactures and supplies steam turbines for meeting the captive power needs of a range of industries such as sugar, steel, pulp and paper, textiles, chemicals, oil and gas, and food processing. The turbines are deployed for multiple applications, including renewable energy generation from biomass, cogeneration, combined heat and power, waste heat recovery, and waste-to-energy. Back pressure turbines, condensing turbines and API steam turbines are some of the key turbine types offered by the company.

Mote says, “Triveni Turbines is one of the largest manufacturers of small steam turbines (0.25 MW to 30 MW) in the renewable energy segment, especially in the sugar industry, for cogeneration, process cogeneration, as well as biomass and waste-to-energy independent power projects.”

The company has two state-of-the-art manufacturing facilities, at Peenya and Somapura near Bengaluru in Karnataka. The turbines adhere to the government’s Make in India mandate across all stages, from designing, engineering, and sourcing to manufacturing and testing. Besides following national and international best practices, the facilities are equipped with internet of things-enabled Industry 4.0 manufacturing systems that enable an efficient production process.

In addition, the company has a 50:50 joint venture (JV) with GE, called GE Triveni Limited, set up in 2010 to manufacture steam turbines of ratings from 30 MW to 100 MW. However, the two partners are currently involved in a dispute, which is sub judice with the National Company Law Tribunal. Besides manufacturing, TTL has an aftermarket business arm, called Triveni REFURB, for its own turbines as well as those of other manufacturers, including European and Chinese ones. It has been successfully refurbishing compressors and generators for its customers. In recent times, Triveni REFURB has secured new orders in Egypt and New Zealand as well.

Of late, the company’s order book has shrunk somewhat, declining 7 per cent from Rs 8.54 billion in 2018-19 to Rs 7.93 billion in 2019-20. Domestic orders accounted for nearly 60 per cent, while exports accounted for the rest. The company’s consolidated outstanding order book stood at Rs 6.7 billion as of September 30, 2020, about 3 per cent lower than that in September 2019.

The increased order bookings in the second quarter of financial year 2021 come from export markets such as Europe, Turkey, and South and Central America for municipal solid waste-based projects, biomass-fired projects and cogeneration projects by sugar industries. In the domestic market, the company has mainly received orders for cogeneration from the distillery, sugar, cement, chemicals, fertilisers, and paper and pulp industries.

Mote notes, “The short-term disruptions caused by Covid-19 are expected to influence order inflows, which, in turn, would have some impact on new order bookings and the recognition of revenue in the near term.”

TTL has demonstrated robust financial performance over the years. Its net sales have increased at a compound annual growth rate (CAGR) of 4.68 per cent, from Rs 6.5 billion in 2014-15 to

On a year-on-year basis, however, net sales declined by 2.6 per cent while PAT increased by 22 per cent in

2019-20, while exports accounted for the rest. In terms of products and aftermarket businesses, the former had a major share of 77 per cent, while the latter constituted 23 per cent.

For the six-month period ended September 2020, TTL recorded a total income of Rs 3.6 billion vis-à-vis Rs 4.6 billion in the corresponding period last year, marking a decline of 21.7 per cent. Meanwhile, profit stood at Rs 473 million vis-à-vis Rs 687 million last year, recording a decline of over 30 per cent. Mote remarks, “Triveni Turbines has a strong balance sheet and, as a debt-free enterprise, it will be able to cover its liquidity needs during these challenging times.” 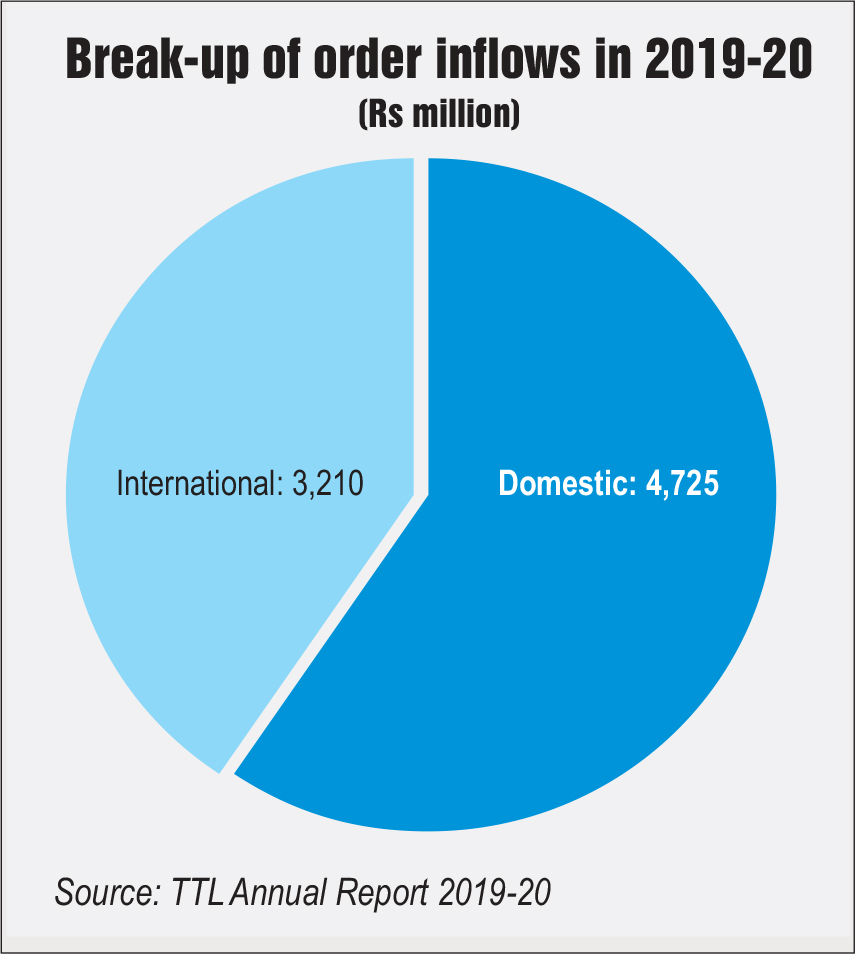 The subdued power demand scenario is a key challenge, especially since Covid has affected industrial demand and hampered manufacturing operations across the country. In addition, power markets across the world are undergoing a transformation, and there is a marked shift from conventional power generation to renewable energy. However, given that TTL supplies steam turbines for biomass- and biogas-based power, as well as for waste heat recovery and waste-to-energy applications, it expects good demand for its products.

The other key challenge is the anticipated decline in global trade due to the effects of the pandemic, especially given the significant share of exports in TTL’s orders and sales. The movement of raw materials and finished goods was severely impeded during the lockdown. Although restrictions are now easing, business activities – in terms of both despatches and new order inflows – may still take some time to normalise. TTL has a healthy carry-forward order book and enquiry pipeline, but it expects delays in order finalisation and customer readiness with respect to taking delivery of their orders, which may, in turn, impact company revenues and orders.

Going forward, the company plans to enter new geographies to mitigate regional market risks. Fast growing countries in Europe, Southeast Asia and Latin America are expected to offer business opportunities in the future. Besides, the company expects to drive the growth of Triveni REFURB and position it as a “one-stop shop” for all rotating equipment in the domestic and international markets.

In addition, TTL plans to continue focusing on technological deployment and automation for cost optimisation and increased business productivity. It expects that the investments of the past few years in streamlining systems and processes across the manufacturing and supply chains will yield benefits in the new normal world. Mote concludes, “Our key strengths lie in our business and operating models, which will not only ensure our survival during these tough times but will prepare us to thrive once again after we are out of this crisis.”