All parameters of power quality (PQ) are not covered under the current regulations of the Central Electricity Authority (CEA), the Central Electricity Regulatory Commission (CERC) and state electricity regulatory commissions (SERCs). In view of the need for greater regulatory intervention in ensuring power supply quality and the need for more effective compliance to PQ standards, a comprehensive white paper on PQ by the Forum of Regulators (FoR) has been prepared. This paper highlights the model regulations states should follow to improve PQ. The model regulations include PQ indices, roles and responsibilities of various entities, standards/limits to be followed, the incentive/disincentive mechanism to be deployed and the procedure for monitoring, managing and controlling all aspects of PQ. Along with these regulations, PQ standards have been prescribed under the technical standards for grid connectivity issued by the CEA. Recently, the government has also notified the Electricity (Rights of Consumers) Rules, 2020, which will empower consumers across the country to have the right to a minimum standard of service for electricity supply. SERCs can specify stricter timelines and service quality parameters under these new rules.

The existing regulations cover the power factor, frequency, reliability of supply and voltage regulations as PQ parameters. While there is a strong system of frequency regulation, the enforcement of standards specified for reliability parameters are required to be strictly monitored and implemented. The existing standards for PQ are broadly discussed under the regulations by the CEA, CERC as well as some SERCs. One of the applicable PQ regulations issued by the CEA are the Grid Standards Regulations, 2010, which specify the norms for operations and maintenance of transmission lines, limits for voltage fluctuation and limits for harmonics to be maintained across voltage levels. These are applicable to generating companies, transmission licensees, distribution licensees, bulk electricity consumers connected at the 33 kV voltage levels, load despatch centres and regional power committees.

Another CEA regulation on PQ standards is the Technical Standards for Connectivity to the Grid Regulations, 2007. These lay down grid connectivity standards pertaining to voltage and current harmonics, and voltage unbalance and fluctuations for distribution systems and bulk consumers. The limits specified in these regulations are similar to the Institute of Electrical and Electronics Engineers’ (IEEE) 519-1992 standards. A draft second amendment to the regulations by the CEA proposes to revise the limits for voltage and current harmonics, in line with the IEEE’s 519-2014 standards. The other changes proposed under these regulations include measurement of harmonics at the power control centre (which is the point in a power supply system electrically nearest to the load), installation of PQ meters by utilities within three years, and continuous measurement of quality parameters for consumers with loads more than the threshold limit. Further, the draft amendment proposes that utilities should record and report in public the data pertaining to harmonics, voltage sag and swells, and disruptions on a monthly basis and that consumers should submit the data as required. Another CEA regulation pertaining to PQ standards for distributed generation is the Technical Standards for Connectivity of the Distributed Generation Resources Regulations, 2013. These are applicable to generating stations feeding electricity directly into the grid at the 33 kV level or below. A draft amendment has been issued, among other things, to rename the regulations as the Technical Standards for Connectivity Below 33 kV Regulations, 2018. The CERC has described some important PQ norms under the Indian Electricity Grid Code Regulations, 2010. The regulations prescribe limits for voltage variation across different voltage levels, ranging from +5 per cent and -5 per cent (at the 765 kV and 400 kV levels) to +11 per cent and -10 per cent (at the 220 kV level). Apart from this, the Bureau of Indian Standards (BIS) has formulated PQ standards. These are reportedly India’s first national standard on PQ titled Distribution System Supply Voltage Quality, notified in October, 2018. 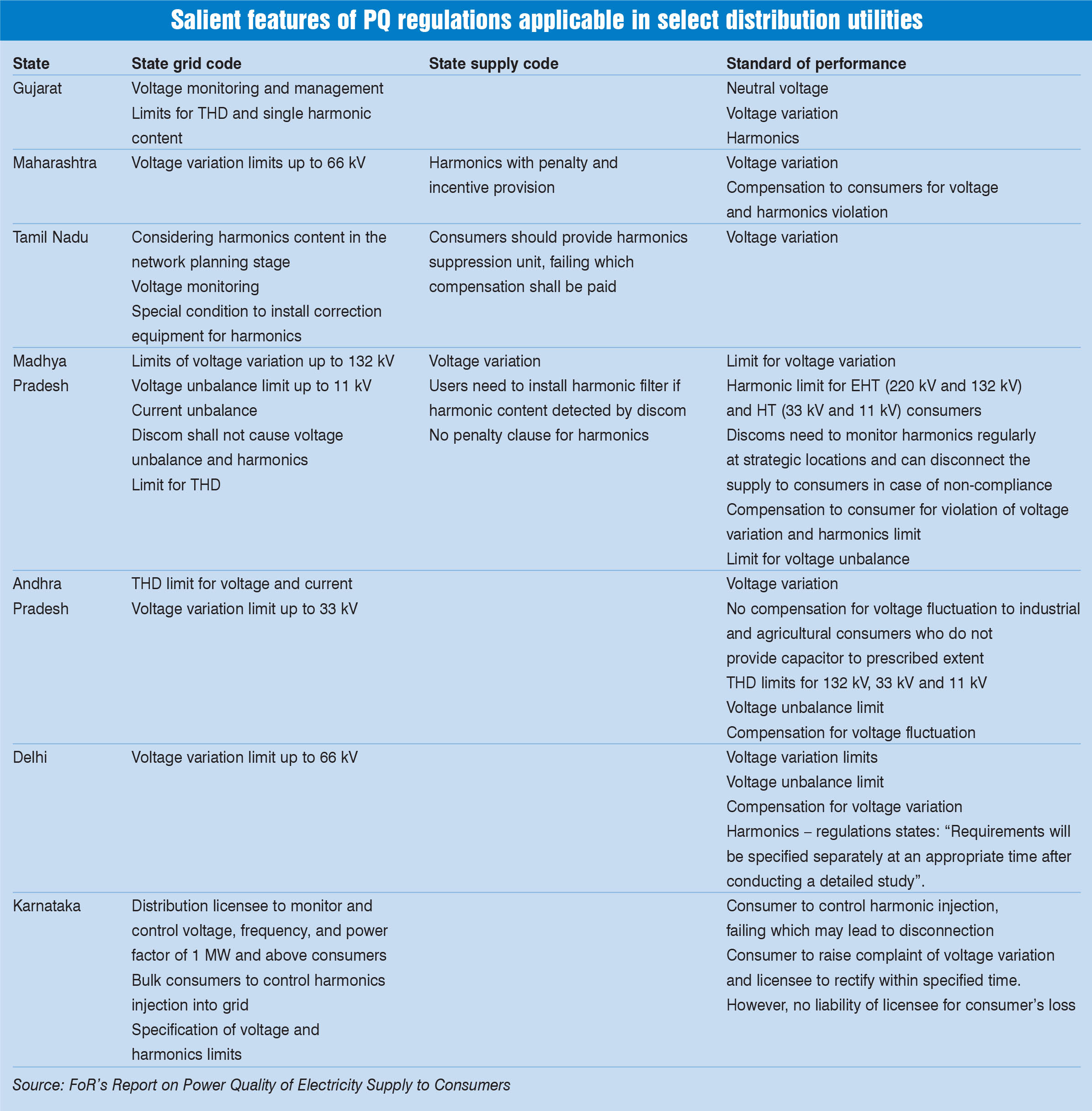 Recommendations for the formulation of PQ regulations

The Report on Power Quality of Electricity Supply to the Consumers, released by a subgroup on PQ under the FoR, lays emphasis on the need for model regulations on PQ, which define PQ indices, roles and responsibilities of various entities, standards/limits to be followed, incentive/disincentive mechanism and procedure for monitoring, management and control of all aspects of PQ. In addition, model regulations on PQ should be adopted by SERCs to implement uniform and consistent standards on PQ across the country having a single national grid. The subgroup has also suggested a draft model regulation on PQ.

The subgroup has recommended that limits for harmonic distortion, voltage variation and flicker, voltage unbalance, voltage sags/swells, and short and long supply interruptions need to be specified in the PQ regulations. Additionally, the subgroup suggests that the PQ may also be integrated with the smart grid application for a more reliable smart grid and promote adoption of technologies such as advanced PQ meters, widearea PQ measurement, PQ enhancement devices for system component and sensitive loads that can provide faster diagnosis and correction of PQ disturbances.

To conclude, various sectors are prone to both generation of higher PQ pollution as well as susceptible to PQ disturbances in the country. Thus, there is a need for emphasis on measurement and introduction of incentive/disincentive mechanism to ensure compliance to PQ parameters within certain limits.

Going forward, the draft Electricity Act (Amendment) Bill, 2020, currently under finalisation, also underlines reforms, which are aimed at making discoms healthy and ensuring that they are able to maintain and improve distribution infrastructure such as transformers and distribution lines, pay for the power purchased and provide quality electricity to people.