In December 2020, the Ministry of Power (MoP) circulated a draft proposal on enabling discoms to either continue with or exit from power purchase agreements (PPAs) with central generating stations (CGSs) once the tenure of the PPA expires.

“States that have long-term PPAs with inter-state generating stations whose tariff is determined as per Section 62 of the Act, and which are due to expire in the future can opt to relinquish/release the entire contracted power of such central generating stations post the completion of the PPA tenure of 25 years,” states the draft. Generators have the flexibility to sell power in any mode after the state/discom exits the PPA, it adds.

According to the ministry, the proposal has been drafted in response to the several representations it has received from various states in the past, which have surplus power and would like to surrender their allocated share from the CGSs. Discoms in states such as Punjab, Delhi, Andhra Pradesh and Odisha have expressed keenness to exit PPA contracts with central government-run utilities after the plants complete 25 years, the ministry notes.

According to data collated from the power ministry, requests were received for surrendering a collective capacity of around 6,488 MW and 5,750 MW in 2018 and 2019 respectively from various states. The states cited the availability of excess power and the high cost of electricity as some of the reasons for surrendering the power allotted to them under the agreements.

As per the ministry, the move is beneficial for both procurers and generators. This arrangement could be availed of by states that are currently purchasing costlier power from CGSs among their entire basket of power purchase sources. It is also expected that the mechanism will be availed of by states that would like to undertake power procurement through other routes such as short-term contracts, day-ahead/real-time markets, bilateral transactions through open access, etc.

The mechanism would also benefit states facing a power deficit currently, as they could contract the quantum of power of such CGS that has been released by states. This would also help decongest inter-state long-term access.

For generators whose share has been relinquished, the mechanism would allow them to participate in short-term transactions, including on the power exchanges, to the extent of such released power and get a chance to earn additional revenues over and above their variable cost of supply. This would increase their supply liquidity, compel them to bring in efficiency and reduce their cost of generation, notes the ministry in its draft.

Power from CGSs to beneficiary states/ union territories (UTs) is allocated in accordance with guidelines issued in 2000. As per these guidelines, allocation of power is made in two parts: 85 per cent as firm allocation and 15 per cent as unallocated power for allocation by the central government. The firm allocation includes an allocation of 12 per cent of free power to the state in which the project is located and 1 per cent for local area development in the case of hydropower stations and 10 per cent (not free) power to the home state in the case of thermal and nuclear power stations. The balance 72 per cent/75 per cent power is distributed amongst the states/UTs of the region in accordance with the pattern of central plan assistance and energy consumption during the previous five years, both factors having equal weightage. Central plan assistance is determined in accordance with the Gadgil formula, in which the population of the states is also taken into consideration.

The unallocated power of the CGSs is also revised from time to time for the beneficiary states, keeping in view factors such as the emergent and seasonal nature of the requirement, the relative power supply position, the utilisation of existing generation and other power sources, and the operational and payment performance of the states/UTs of the region. 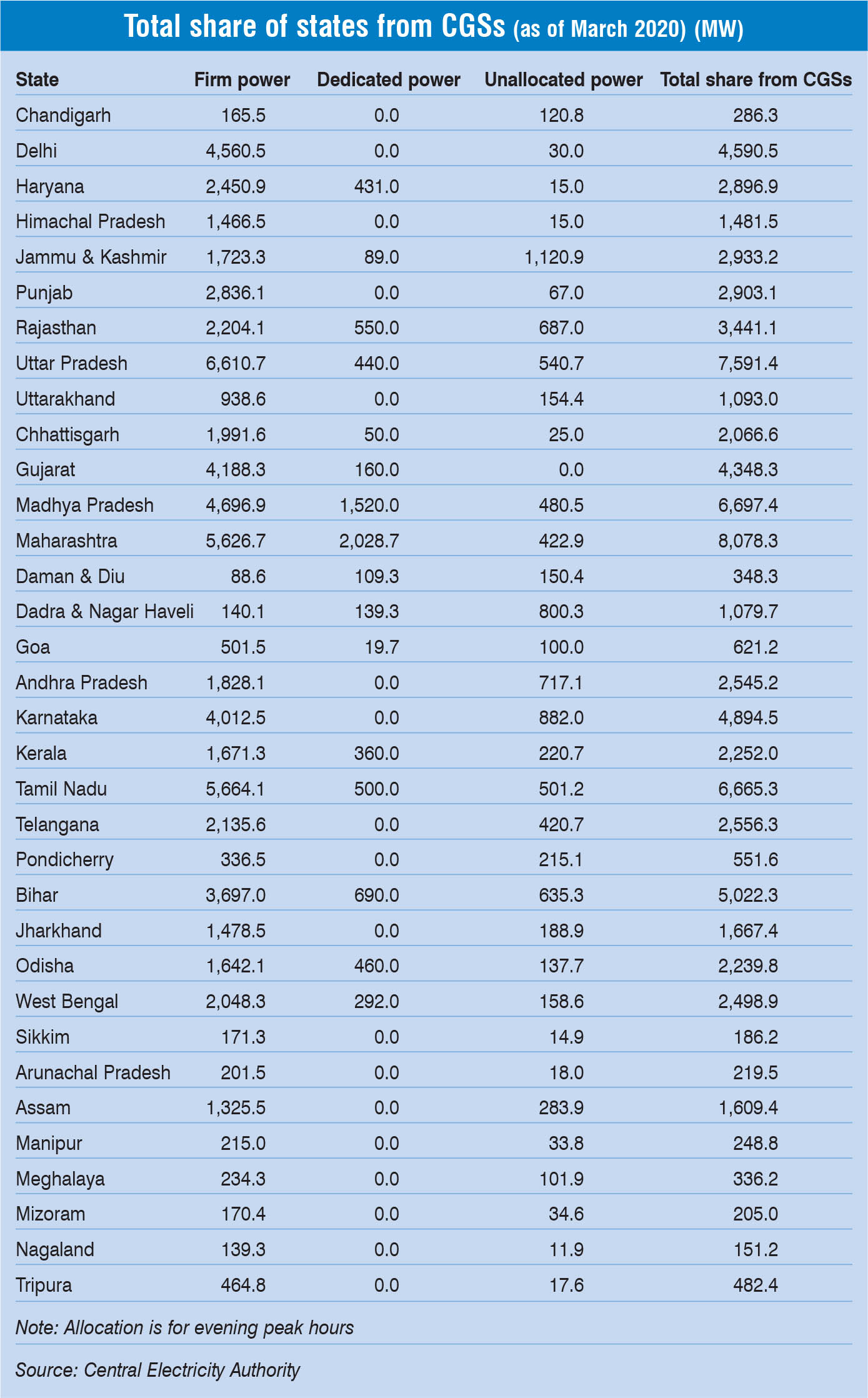 State discoms that have a long-term PPA with the CGS for the capacity allocated by the central government and such PPAs that have expired or are due to expire in the near future can opt to release the entire allocated power from such a CGS post completion of the term of the PPA of 25 years. For those plants that have completed 25 years, states can exit after a three-month notice.

In the case of bulk power supply agreements (BPSA), a state will need to exit from the PPA in entirety, that is, with respect to all stations in its BPSA.

For CGSs whose share of power has been relinquished, they will be free to sell such power through various avenues (but through competitive bidding), including tie-ups with other buyers through the long, medium or short-term route; through power exchanges including day-ahead, term-ahead and real-time markets; or get the power reallocated to willing buyers at regulated tariffs. 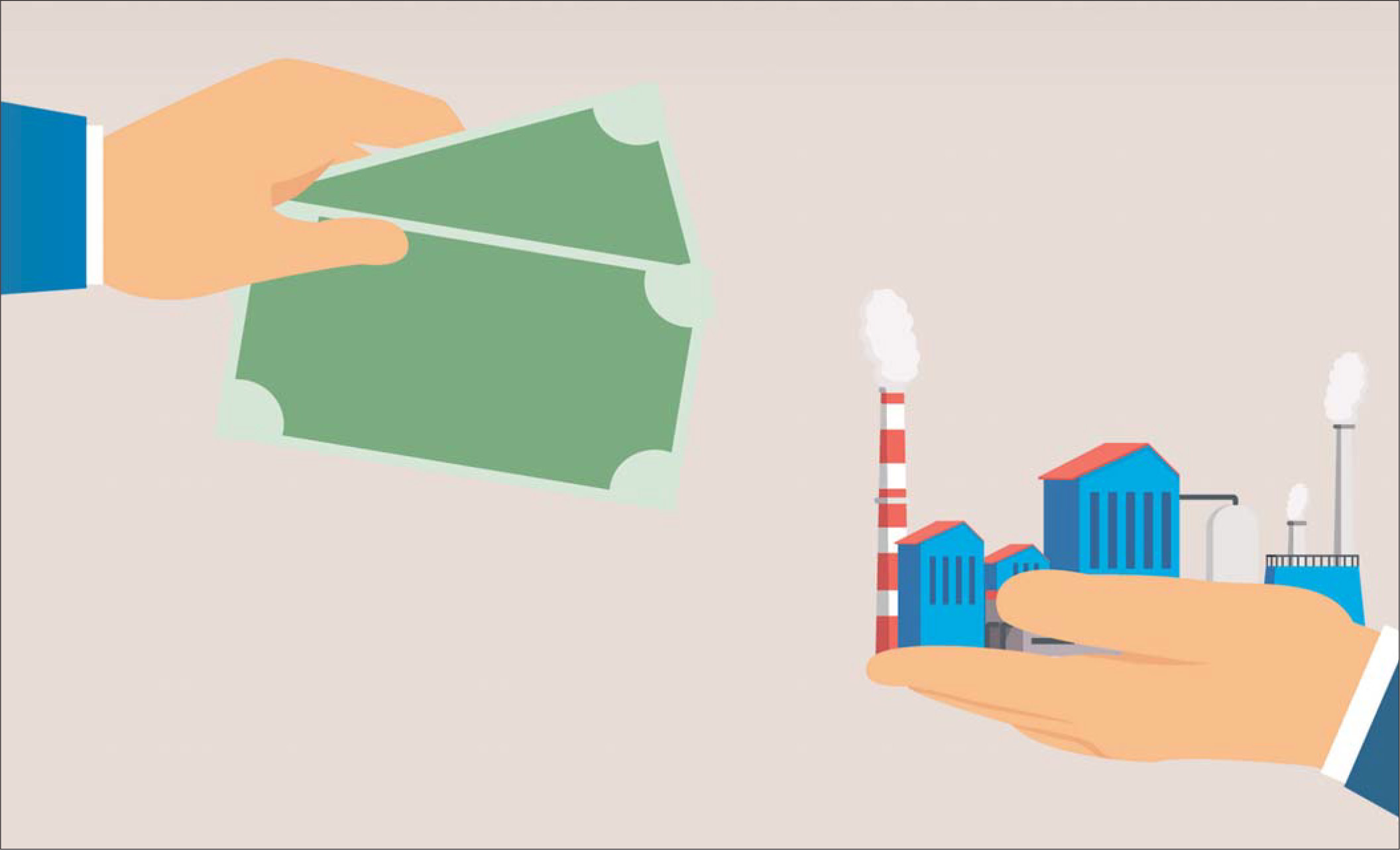 According to sector experts, the move will allow greater flexibility to states to manage their power procurement options. More so as power availability has improved significantly in recent years. Also, it would relieve states from the onerous financial liability of the fixed cost charges that they would otherwise pay on old plant PPAs, and thus be able to procure cheaper power and supply it to consumers at more competitive rates.

However, there are certain concerns and challenges that would need to be addressed. One of these pertains to the condition that specifies that a state would need to exit from a BPSA in entirety to participate in the scheme. In a note drafted by the Prayas Energy Group, it points out that since the BPSA could also include capacity of less than 25 years age and capacity with a lower variable cost, the states would necessarily have to give up all the contracted capacity, which is a significant risk. Also, the current proposal lacks clarity on the allocated coal linkages. The government needs to clarify whether the generation stations will retain their coal linkages for capacity that has been relinquished under the scheme. The coal policy, analysts say, will need to be modified so that generators are able to sell power in the market. Lastly, the surrender of power should be done by states/discoms only after evaluating whether the benefit from surrendering capacity is higher than the cost of the alternative power source.

Environmentalists have also pointed out that the guidelines give an option to thermal power plants to continue to sell power beyond their PPA period instead of retiring them, which is detrimental to the environment and India’s carbon emission reduction goals. Another concern, analysts note, is that generators such as NTPC, which have nearly 11,000 MW of PPA capacity that is of 25 years and above, would face a challenge in renewing contracts. That said, it is expected that discoms would most likely retain the PPAs with pithead plants to allow them to use low-cost power to meet base load demand, and discontinue PPAs with only old and inefficient plants with low PLFs.

The power ministry has for now sought comments from the states and central power generators before a final decision is taken on the proposal. Meanwhile, players in the power market would need to reset their strategies as power procurement moves away from long-term contracts, and thus be prepared when the new regime kicks in.