Punjab State Transmission Company Limited (PSTCL) was carved out of the Punjab State Electricity Board in 2010. With a line length of 12,377.52 ckt. km and a transformer capacity of 37,708.67 MVA, the utility is one of the largest transcos in the country today. Over the years, PSTCL has implemented several initiatives to improve its operational performance such as remote monitoring, the use of HTLS conductors and hotline maintenance. As of November 2020, the transmission loss stood at 2.58 per cent, significantly lower than the loss level of over 4 per cent in 2016-17. PSTCL has also maintained a system availability of 99.97 per cent in the past fiscal. 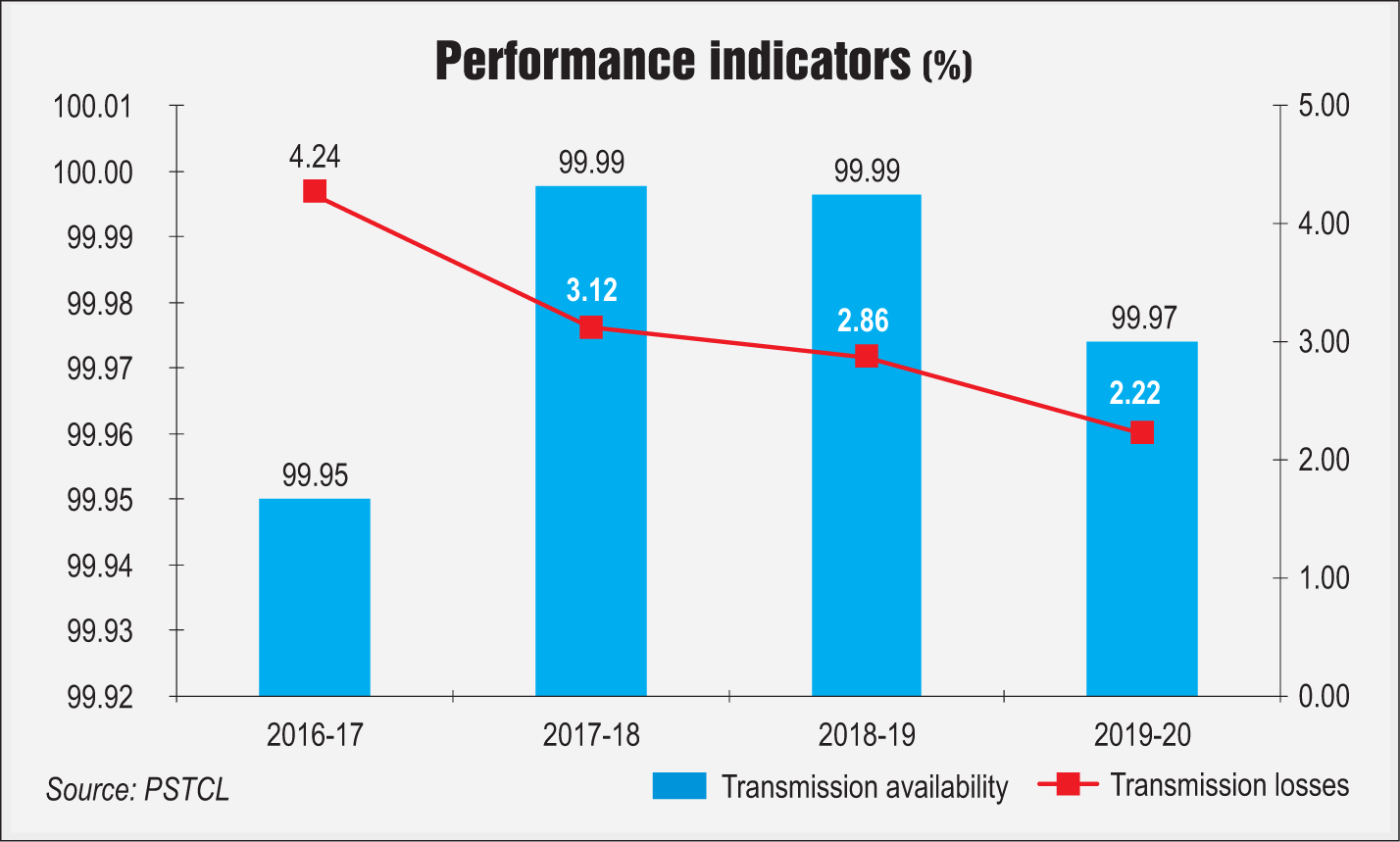 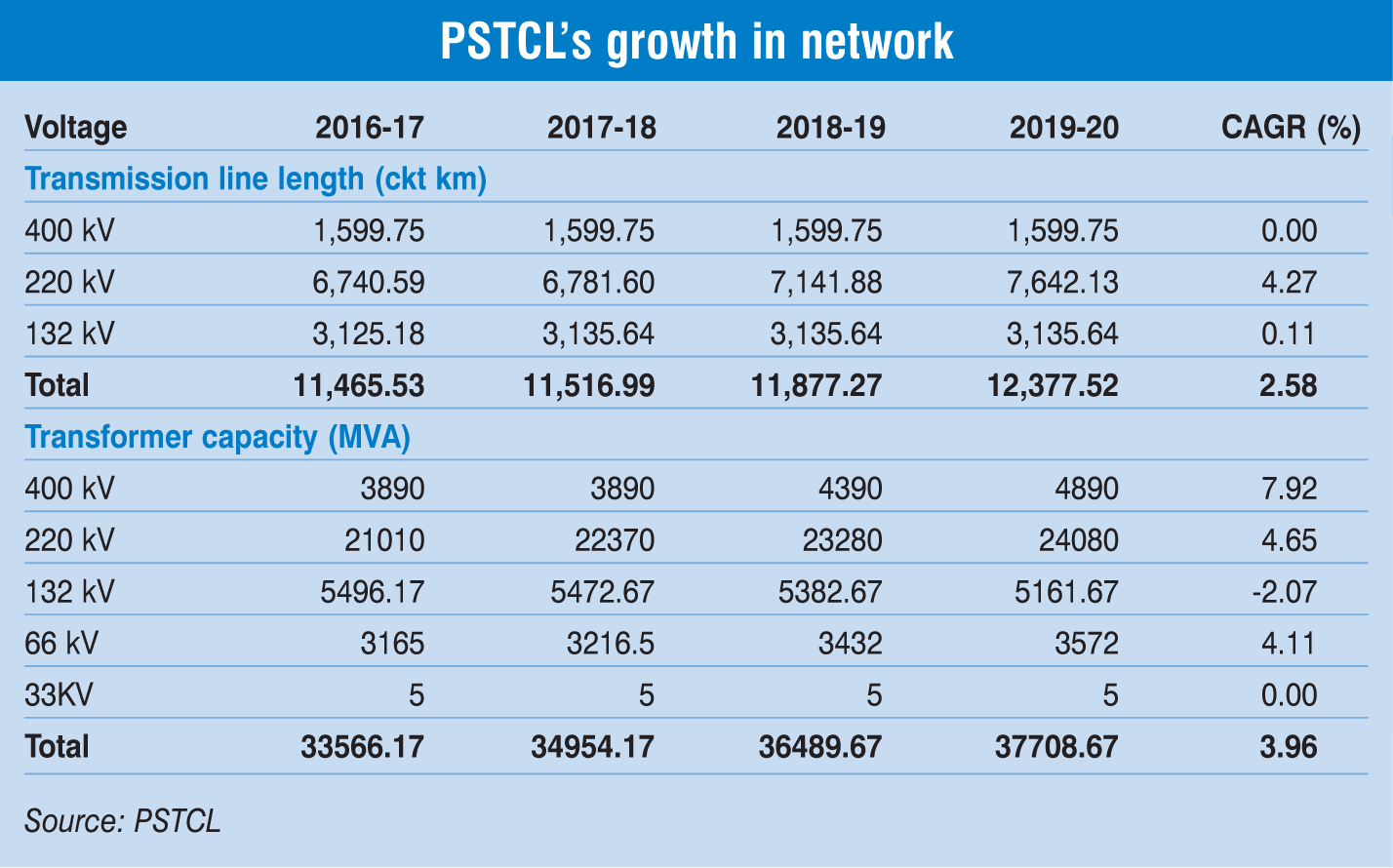 In terms of its operational performance, PSTCL has been successful in reducing its transmission losses from the 2016-17 level while maintaining a high system availability.

The transco has been implementing various initiatives for the upkeep of its network, thus ensuring optimum performance. It has implemented remote control operations at a few of its substations. Further, to address the issue of overloading, measures for de-loading such as the installation of HTLS conductors that allow greater flow of power through the same corridors are being undertaken. 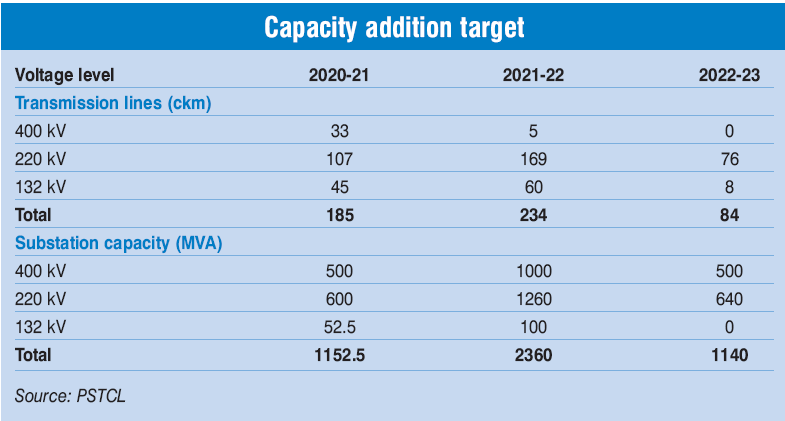 As per data from the 19th Electric Power Survey, the energy consumption in Punjab is expected to reach 71,508 MUs by 2024-25. The peak requirement during the period is expected to reach 17,217 MW. Considering the load requirement of 15,654 MW by 2022-23, PSTCL envisaged that the existing generation from its units is likely to be about 6,000 MW. Hence, the remaining requirement of around 9,950 MW has to be sourced from outside Punjab, that is, from Powergrid’s 400 kV interstate grid. To meet the growing demand, a reliable, adequate and robust transmission network would be required.

In terms of physical network additions, PSTCL is planning to add 503 ckt. km of line length from 2020-21 to 2022-23 and over 4,652 MVA of substation capacity during this period with the majority of infrastructure additions at the 220 kV levels.

Its future plans include augmentation and addition of 220/66 kV and 66/11 kV transformers at the 220 kV grids as well as augmentation of bus bars, extension in control room buildings, and other works related to system strengthening. Further, it plans to set up substations at the 400 kV level, including one based on AIS technology. It also has plans for the replacement of existing conductors with HTLS conductors.

Further, certain 220 kV grids have single 100 MVA, 220/66 kV transformers, which will be augmented with additional 100 MVA, 220/66 KV transformers, keeping in mind the space availability. The implementation of OPGW-based reliable communication at 132 kV and above substations has been planned, along with the digitalisation of PSTCL’s existing substation at Passiana.

For the SLDC functions, most of the planned schemes are related to the installation of remote terminal units (RTUs) across the state. The RTUs are to be installed on various substations and are to be integrated with the SCADA system.

In the future, Punjab is expected to have 4,772 MW of solar and 50 MW of small-hydro in 2022-23. To this end, PSTCL has submitted that when the connectivity of such projects will be finalised (other than the ones already identified to be connected at the 132/220 kV level), it will approach the commission to allow expenditures/costs for such schemes.

The weak financial performance and constrained liquidity profile of PSTCL is a cause for concern. Thus, the transco requires proactive support from the Punjab government to ensure the timely recovery of dues from the counterparty.

That said, PSTCL’s network modernisation and augmentation initiatives are expected to ensure that the transco maintains its strong transmission availability and the state is able to meet its future power requirements.