Anjuli Chandra suggested that we need to gauge how prepared utilities are to adhere to the timeframe for the implementation of the electricity rules. To implement these rules, she said it is incumbent on the regulator to specify and approve a feed-in tariff, in addition to establishing a Consumer Grievance Redressal Forum to resolve issues arising at the grassroots level due to lack of clarity and precedence of feed-in tariffs, smart meters, etc. Providing reasonable timelines for implementing the framework will be important to ensure a smooth transition.

Neil Chatterjee spoke about the parallels between USA and India with regard  to energy-based objectives and challenges in the electricity sector. He also mentioned the various areas in which FERC and India’s CERC are collaborating, such as battery storage and gas-based electricity. He stated that the current regulatory objectives are linked to designing an enabling regulatory architecture capable of facilitating a mass transition to renewables, supported by cleaner fuels for auxiliary support, to ensure the reliability and robustness of the system. He added that energy storage, along with internet of things, will be transformative for the energy sector, as they will help in increasing the reliability of renewable energy-based energy systems.

Anand Kumar spoke about the introduction of technologies in Gujarat’s power sector at various levels. These technologies have helped the state maintain efficiency in providing affordable, high-quality electricity supply while remaining profitable by minimising waste and other inefficiencies inherent in the system. He lauded the investments in these technologies as being pivotal to the significant reduction in AT&C losses in Gujarat. He also spoke about other regulations and technologies currently being put into place to further improve the distribution segment. He welcomed the new rules, but stated that consultation is needed among all stakeholders, including consumers. The rules are broad and deep, and cover every aspect of the supply code, he added.

Mohan Gupta discussed the possibility of a substantial growth in the adoption of off-grid and household rooftop solar electricity in the next few years. He emphasised how SAP is endeavouring to provide customised services to different customers to maximise the company’s revenue and better fulfil customer requirements. According to Gupta, future business opportunities in the sector include electric mobility, services revolving around smart meters and analytics, a complementary suite of products, and distributed generation. 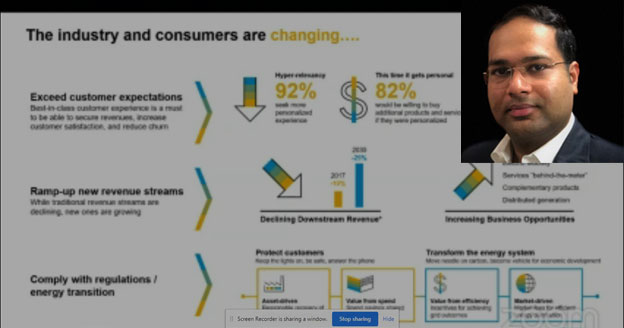 M.S. Kele spoke about the challenges in adopting smart devices in Tripura while being constrained by limited revenue streams and limited external funding. He spoke about the difficulty in convincing the public to adopt renewable energy-based technologies owing to their high upfront capital cost. He also spoke about the technologies being deployed to maximise the efficiency and reliability of their distribution company, such as R&M of conductors, ABC cables, etc. He spoke about how the introduction of CGRF and customer call centres could improve the quality of service provided to customers since it fundamentally provides them with instruments to voice their issues and grievances.

Sanjay Banga highlighted the positive changes that have been brought about since Tata Power took over the management of the Central Electricity Supply Utility of Odisha to supply power in the Central Odisha region. Tata Power has a 51 per cent stake in the newly formed entity, Tata Power Central Odisha Distribution Limited. Although the company has installed smart meters on the lines of Delhi, he mentioned that 80 per cent of the population that receives power in Odisha is rural, thereby implying that they would have to bear higher costs for smart metering in the state. He also elucidated on the importance of modernising and overhauling the transmission infrastructure in India in order to facilitate the transition to renewables, which have variable loads and unpredictable supply schedules. He added that greater adoption of rooftop solar, which feeds electricity back into the grid, only means that the transmission will have to be smart, reliable and quick in order to regulate the take-in and supply between consumers and generators while maintaining the stability of the grid.

Sanjay Kumar Jha stressed on the fact that in the future, electricity consumers will also feed electricity back into the grid by generating it through solar panels. Therefore, according to him, it is high time to design policies and investment plans to promote such systems. He also spoke about how the regulatory changes pertaining to customer service, such as the mandate to respond to customers and resolve their problems within 30 days, are helping improve consumer welfare. He added that moving all services online will further improve accessibility for consumers.

Timothy Dean Self spoke about how the development of the Indian electricity sector and its transition to renewable energy has been quite rapid. He also talked about the forthcoming boom in the installation of smart meters and how it will open up new avenues for companies to sell components that are tailored to meet those needs. He stated that this will change the dynamics of the relationship between the generator and the consumer, and therefore stressed on the importance of regulators being prudent in devising specific policies to balance the needs of both generators and consumers.