Coal-based electricity is a critical component of the Indian energy mix, accounting for more than 206 GW of installed capacity (55 per cent of total capacity) as of December 2020 while generating over 71 per cent of electricity. However, with the rising share of renewables in the energy mix, coal-based power plants are envisaged to play a complementary role in the coming years, addressing the intermittency issues associated with renewable power.

Meanwhile, in recent years, the rising fuel and capital costs owing to investments in emission control equipment have increased the expenditure on coal-based power generation. The coal-based segment is facing cost competition from renewables owing to the introduction of bidding and decline in equipment costs, which has led to a reduction in wind and solar power tariffs.

Owing to a slowdown in new capacity addition over the past three to four years amid the policy focus on renewable energy, decline in electricity demand and a large stressed asset portfolio in the thermal power segment, the share of coal-based power generation in the fuel mix has declined from 76 per cent to 72 per cent from 2014-15 to 2019-20. In comparison, the share of renewables (excluding hydropower) in generation has doubled from 6 per cent in 2015-16 to 12 per cent in 2019-20.

In 2015-16, the average tariff of NTPC Limited stood at Rs 3.18 per kWh, which meant that coal was the cheapest source of electricity and all other sources of electricity were measured against it. However, in the past few years, the average tariff of NTPC’s plants has risen to Rs 3.90 per kWh. It still remains competitive, supported by healthy operating efficiencies, a large portfolio of operational projects with low fixed charges and reasonable fuel costs given that the majority of the coal-based plants are situated close to pithead mines. The cost of generation for recently commissioned power projects of NTPC remains more than Rs 4.50 per unit due to rising capital costs, O&M costs and fuel costs. This upward trend in coal–based power tariffs is being driven by several cyclical trends and structural adjustments.

Further, coal power plants face time and cost overruns, resulting in tariff hikes. The delays can be attributed to issues pertaining to land acquisition, environmental clearances, delays by EPC contractors and fuel tie-ups. Another factor responsible for the rise in coal power tariffs is limited funding from financial institutions. In 2019, thermal power plants (TPPs) in India received Rs 11 billion in project finance, a sharp decline from the Rs 607 billion received in 2017. This can be largely attributed to the enormous quantum of non-performing assets in this sector, due to which financial institutions are reluctant to extend funding.

The signing of fresh long-term power purchase agreements (PPAs) has also been subdued since 2014-15 due to poor discom health. Furthermore, the discoms are applying for medium-term PPAs under the medium-term PPA scheme of the Ministry of Power (MoP), with built-in indexation for fuel costs and other variable charges. This is expected to benefit power plants, especially those that use imported coal and thus bear high costs without a corresponding change in tariff. Two medium-term auctions have been conducted by the MoP so far, under which 4.4 GW of capacity has been tied up, against the 15-16 GW of operational coal-based capacity lacking adequate long-term PPAs.

Impact of emission norms on costs

Coal-based power plants have been mandated to install flue gas desulphurisation (FGD) systems, which will increase their cost of generation and, in turn, tariffs by Re 0.29 per kWh. With respect to FGD, the cost per MW quoted by suppliers has varied from as low as Rs 1.9 million per MW to as high as Rs 9 million per MW in tenders issued by NTPC. The cost depends on factors such as the size of the unit, number of units in the project, the vintage of the project and its location. The cost of 500 MW units has largely been in the range of Rs 5 million per MW. Its impact on the levellised cost of generation is estimated, along with the impact of additional O&M and higher auxiliary consumption, is 15-16 paise per unit. Power generation companies will have to pass on the higher cost of generation to the distribution utilities under the change in law mechanism in the PPA.

So far, there has been slow progress in complying with the revised emission norms by TPPs, with FGDs commissioned for only 1 per cent of the identified capacity. Based on the current implementation progress, most of the coal- and lignite-based plants are likely to miss the December 2022 timeline to comply with the emission norms. 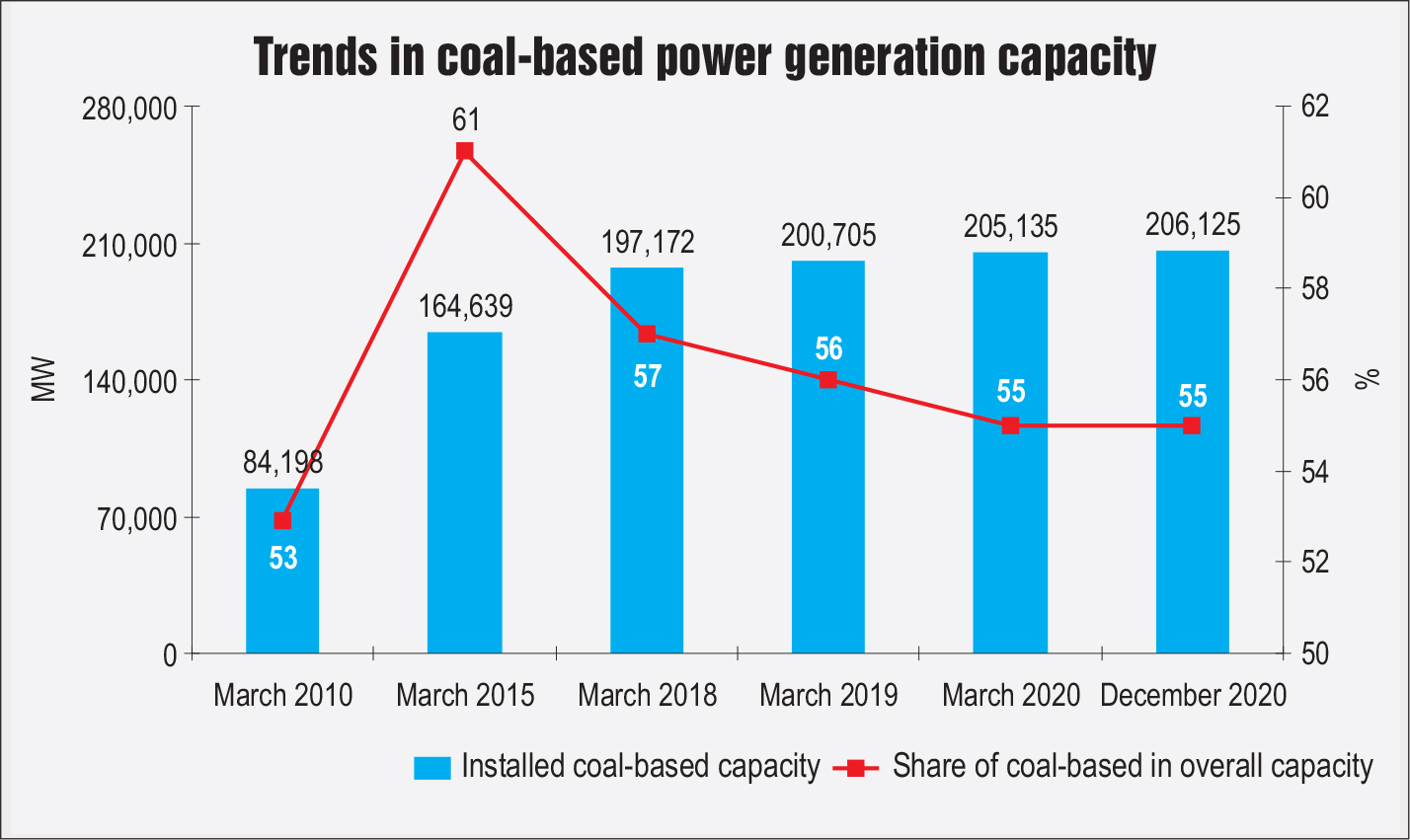 After witnessing a decline in production between April 2020 and July 2020, the domestic coal segment recovered with the easing of lockdown restrictions and growing demand for electricity. This in turn resulted in a marginal growth of 0.4 per cent in coal production by Coal India Limited for the first 10 months of 2020-21.

Also, the coal imports by power utilities witnessed a sharp decline of 33.1 per cent in the first nine months of 2020-21 over the previous year. The decline in coal imports was driven by the reduction in electricity demand amid the Covid-19 pandemic. However, the expected recovery in demand growth in 2021-22 is likely to increase the dependence on coal imports.

International coal prices have also witnessed a sharp recovery in recent months. The Indonesian HBA coal price index increased by 27.1 per cent to stand at $75.84 per million tonnes (mt), free on board, in January 2021, as against $59.65 per mt in December 2020, primarily due to higher demand for coal from China. The benchmark price, currently at a 19-month high, is 15 per cent higher than the $65.93 per mt reported in January 2020.

In August 2020, the MoP issued an advisory to all generation and transmission companies, asking them to charge discoms a late payment surcharge at a rate not exceeding 12 per cent under the liquidity infusion scheme in order to ease the financial burden on distribution companies. Earlier, such penalties could go up to 18 per cent. As a result, the liquidity position of coal power plants will be weakened owing to a longer receivables turnover rate.

Meanwhile, the November 2020 ruling, simplifying the procedure for changing the source of coal without applying for environmental clearances, could be favourable for the industry. It will allow several coal projects using imported coal to flexibly switch over to domestic coal or raise the degree of coal blending (mixing coal of two different grades) in order to reduce costs.

In sum, rising fuel costs and capital expenditure on emission control have put pressure on the industry. The cost of generation for coal-based power plants is expected to increase due to rising coal prices and coal freight costs. Further, to cope with the growing share of renewable sources of energy, coal-based power plants will need to adapt by implementing flexibilisation in a cost-competitive manner.