Uttar Gujarat Vij Company Limited (UGVCL), one of the four state discoms in Gujarat, is among the best performing discoms in the country with an aggregate technical and commercial (AT&C) loss level of 4.65 per cent in 2019-20. Incorporated in 2003, post the unbundling of the erstwhile Gujarat Electricity Board, the discom serves a consumer base of over 3.7 million (as of March 2020) across four circles, 22 divisions and 144 subdivisions. The discom has consistently registered profits. Its collection efficiency was 100 per cent in 2018-19, with only a marginal decline in 2019-20 due to the Covid-induced lockdown in March 2020. The discom has achieved 100 per cent rural electrification and the lowest non-agricultural T&D losses. Further, it has the lowest debit arrears and permanently disconnected consumers (PDC) arrears, among the four state discoms of Gujarat.

While the nationwide lockdown had an initial impact on UGVCL’s revenue collections, the discom has managed to navigate the crisis reasonably well, and is also expected to maintain its future capex plans. The discom is also going full steam ahead with its strategic plans for network augmentation and strengthening, involving underground cabling and installation of smart meters, among others.

UGVCL operates a network spread over 49,950 square km, covering seven full districts in the northern region of Gujarat, and three part districts in the western and central areas. Of its total consumer base, 2.85 million are domestic consumers, 0.39 million industrial consumers, 0.38 million agricultural consumers, 0.025 million commercial, and the remaining fall under the other consumers category. The company’s energy sales decreased marginally by 0.63 per cent, from 22.4 BUs in 2018-19 to 22.26 BUs in 2019-20. Of these, 7,451.56 MUs of energy sales were in the high tension (HT) category, while the remaining 14,806.92 MUs were in the low tension (LT) category. 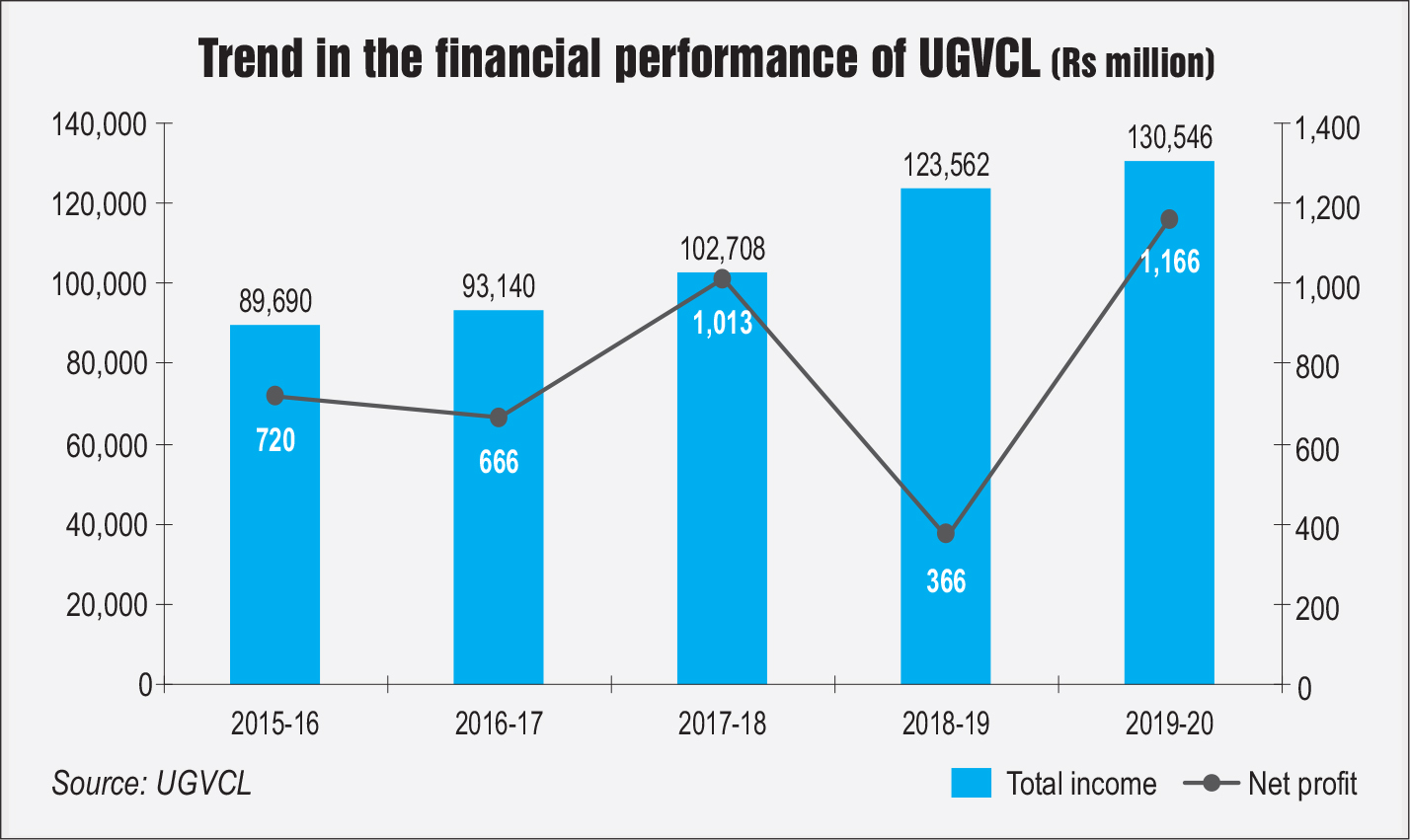 UGVCL has segregated high-loss-making feeders and applied point load in these areas, besides appointing feeder managers for special tasks. During 2020-21, 125 high-loss-making feeders were selected and tasks were assigned to feeder managers. These included mass checking drives, filing of FIRs, all activities related to loss reduction, provision of aerial bunched cables and armour services in theft-prone areas, installation of watchdog transformers to control unauthorised/theft load, and design of 11 kV/1,000 kV special transformers as a pilot project to make the installation pilferage-proof.

UGVCL has deployed HT automatic meter reading systems for all its HT/ EHT consumers. Further, over the past two years, the utility has bifurcated 766 11 kV feeders and erected new feeders to improve the voltage profile and reduce technical losses.

During 2019-20, 3,141 special design transformers have been installed at agricultural feeders, providing benefit to 165,021 connections. A total of 20,692 new agricultural connections, 443 new HT connections, 16,694 LT industrial and 86,287 lighting connections were released with 502.54 MW of contracted load during 2019-20. Further, UGVCL has implemented the Geo-Urja Project and the DISCOM Power Portal Under 2,308 feeder survey works have been completed against the targeted 5,610 feeders.

Close monitoring of ampere loading at feeders is being carried out. Further, all HT and current transformer (CT)-operated meters are being checked twice a year. A study of per capita and village-wise consumption is being carried out along with a comparison with the previous year. The regularisation of unauthorised load is also done as per regulatory provisions. UGVCL has an LT-HT ratio of 0.67. Further, it has segregated agricultural and non-agricultural feeders with 24×7 power supply.

Other best practices by UGVCL include the early release of connections (13 urban subdivisions have been selected for the “on-spot” connection release strategy), timely billing, and consumer-wise monitoring for arrear recovery. Lok Adalat is arranged for the disposal and recovery of arrears from PDC consumers. Further, several levels of audits are carried out, including internal audit, statutory audit, cost audit, tax audit, secretarial audit, audit for electricity duty, audit by the Gujarat Electricity Regulatory Commission and by the Comptroller and Auditor General of India.

For monitoring and remote operations of 136 feeders across 19 substations, a SCADA control centre has been established at Gandhinagar, which covers 12 subdivisions of Ahmedabad periphery. An underground network has also been developed with the smart GIDC concept to provide electricity infrastructure.

A LoRA pilot project for remote metering with low-power RF technology has been implemented at the field level as suggested by the Gujarat Power Research and Development Cell. The utility has also commissioned 16 Suryashakti Kisan Yojana (SKY) feeders, covering 441 agricultural consumer sites where solar panels have been installed and are being monitored through the SEDM portal on a real-time basis. Further, it has implemented a smart grid pilot project in the Naroda urban sub-division. The project covers automatic meter reading and bill generation, remote connect/disconnect of consumers with overdue bill payment, net metering for solar rooftop consumers, consistent data availability and real-time energy audit.

Repeated misuse of energy has been reported in the border areas of UGVCL. These border areas are very sensitive as some are tribal areas while others are deserts. Further, there are around 152,029 unmetered agricultural consumers with a contracted load of 2,824.07 MW. Making unauthorised extension of loads creates a big issue among farmers. In tribal areas, there is no clear demarcation between the Gamtal and Simtal areas, and agricultural feeders pass through these areas. The people of this area used to run single-phase motors for irrigation purposes by tapping the 24-hour Jyoti Gramyojana line, which has resulted in huge losses for the discom. Due to a major portion of agricultural load, tribal areas are heavily cross-subsidised over industrial consumers. The average cost of realisation for agricultural consumers is only Rs 3.18 per unit, while for industrial consumers, it is Rs 6.91 per unit (as per the 2018-19 audited account report).

There are also issues related to right of way, land acquisition for laying the overhead network and installation of new substations due to the high cost of land. In rural and tribal areas, there are issues related to billing and customer service as customers are scattered. The declining water table has led to the use of submersible motors of more than 50 HP, which results in high consumption by unmetered agricultural consumers.

Despite Covid, UGVCL has planned capex of around Rs 52,750 million for the period 2021-22 to 2025-26. One of the key initiatives planned by the discom is underground cabling on the outskirts of Ahmedabad. It has planned 1,250 ckt. km of underground cabling. The discom plans to add around 21,500 ckt. km of distribution line length, around 6,200 MVA of transformer capacity, and 91 substations by 2025-26. Another key area that the discom is focusing on is smart metering. It has also planned  installation of 3.65 million smart meters between 2021-22 and 2025-26.

Going forward, UGVCL’s initiatives to improve its performance and modernise its distribution network with the deployment of new technologies, coupled with its proven track record of strong operational and financial performance, will support the company in its efforts to improve its services and meet the demands of its large consumer base.

With inputs from a presentation by P.B. Pandya, Chief Engineer, UGVCL