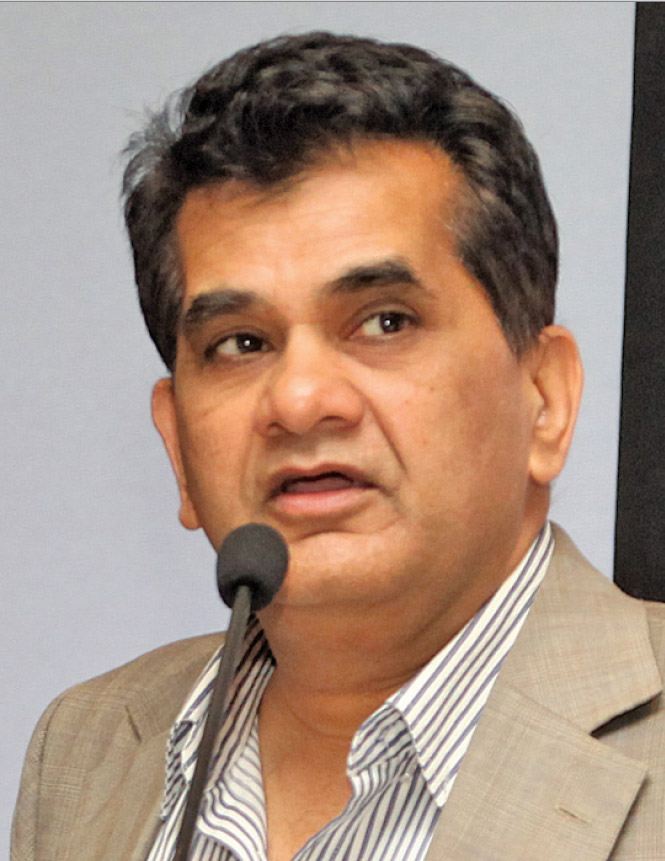 Considering India’s renewable energy target of 450 GW by 2030, it is imperative that our energy grid has newer green technologies such as green hydrogen in the medium to long term. As India moves towards a low-carbon pathway, green hydrogen can help in accelerating its energy transition. While conventional hydrogen has long been used for industrial purposes, green hydrogen is still seen as a potential area of opportunity. Broadly, building a green hydrogen economy in India will require the creation of an enabling and competitive ecosystem with a secure supply chain, extensive research and development (R&D) for technology advancements, and a demand-based approach. In a recent webinar organised by WRI India, Amitabh Kant, chief executive officer, NITI Aayog, talked about India’s approach to green hydrogen. Excerpts…

Today, India’s renewable energy industry is close to 93 GW, and we have been able to bring down solar prices to about Rs 1.99 per unit. This gives us a very unique opportunity for a green hydrogen revolution in India. Our imports in the energy sector stand at about $160 billion and these will probably keep rising and double over the next decade. This is a huge drain on our foreign exchange. The volatility in the prices of these resources is a great threat to India’s economy. We are aiming to be a 450 GW nation, which will need a 5x increase from today. Green hydrogen can help India transition to become a climate leader by mitigating emissions.

Not all hydrogen is created equally. Brown hydrogen is produced through coal gasification and it is the most polluting form of hydrogen. Meanwhile, grey hydrogen is produced from natural gas using a process called steam methane reformation of natural gas, which emits a large amount of carbon dioxide. Apart from this, there is blue hydrogen, which is produced using natural gas, and is combined with carbon capture storage or carbon capture use technologies in order to reduce carbon emissions. There is also green hydrogen, which is produced using electrolysis of water with clean electric power. India has many medium capacity electrolysers in the chemical sector to produce compounds such as caustic soda, and the same technology and advanced versions of this technology can be used to make green hydrogen. India already has companies building world-class electrolysers. The electrolyser technology is used to split water via clean electricity to produce emission-free hydrogen.

India’s recent bid of about Rs 2 per kWh in the solar segment is among the lowest in the world. This gives India a huge advantage in disrupting the hydrogen industry. A recent study by the Hydrogen Council, which works in partnership with McKinsey, analysed the global potential for hydrogen leaders. It concluded that if India takes all the right policy steps, it will actually be a net exporter of hydrogen by 2030, with $1.5 per kg hydrogen cost. Notably, India is witnessing falling renewable energy costs and is adopting round-the-clock and hybrid renewable energy solutions. Round-the-clock power is the key to providing stable power load for electrolysers, which need around 80 per cent capacity utilisation in order to remain viable. Hence, solar plus wind plus battery seems to be the standard model for green hydrogen projects.

One of the advantages for India is that hydrogen is already being used across multiple industries, including ammonia and methanol. The current production of grey hydrogen, emits large quantities of CO2. In India, there is a demand for 6 metric tonnes of hydrogen, which actually accounts for about 8.5 per cent of global demand.

India has a very ambitious commitment of 450 GW of renewable energy by 2030, and we have done very well so far. Achieving this target will be extremely difficult without green hydrogen. India’s current renewable power installed capacity is 92-93 GW. To reach 450 GW, it has to increase its capacity by five times, which will pose serious challenges for grid stability. With the growing integration of renewables, the time gap between peak production and peak demand will widen and lead to a duck curve, as was seen in California, posing the risk of grid collapse. Beyond 120–130 GW of solar, we will run into this problem and as we go in for bids for 24×7 power and hybrid solutions, we will find the bids getting more and more expensive. Therefore, for going up to 450 GW, we will need to push for the use of renewables for green hydrogen production.

In order to succeed with green hydrogen, we first need to set a cost target of $1-$1.5 per kg by 2030. We need to unlock the domestic demand for it. by spurring a shift to green hydrogen. We need to develop a nascent electrolyser market. The manufacturing of electrolysers is actually a $20 billion opportunity. We need to tap into the export market. There is a large export market in countries like South Korea and Japan, which are looking to establish a green hydrogen value chain, but they lack the renewable capacity and the land to achieve the scale needed for the transition.

Hydrogen with a high calorific value is available in multiple forms such as water, and the potential to transport hydrogen in multiple forms makes it a very versatile fuel. The primary application of hydrogen is in industries such as refineries, steel, fertilisers, and chemicals. The use of hydrogen as an alternative transport fuel, especially for heavy duty commercial and city-to-city transportation, is possible only if hydrogen fuel cell transportation is feasible at low costs, which would only be the case if hydrogen is taken up by other sectors of the economy as well.

Since hydrogen can be stored for seasons, it can be a long-term storage option and hydrogen ammonia can be used in gas-powered generators. We already have a very nascent hydrogen component ecosystem. Globally, there is a huge supply bottleneck of about 90 GW for electrolysers and it is certainly possible for us to capture this market. Besides this, moving forward we need to have production-linked incentive schemes in order to incentivise the manufacturing of electrolysers and their supply chain.

We need to create demand for hydrogen much like we did for solar. For this, we must push for mandates, incentivise a demand-mandate based approach, adopt the right policies for market creation, and develop a progressive and stable regulatory framework. These are very critical aspects to initiate the adoption of green hydrogen and ensure a stable demand in the future. Based on the viability gap analysis done by NITI Aayog along with our global partners, it is obvious that we need to scale up hydrogen demand in an efficient way by introducing it in phases. The first stage will be refinery, ammonia, CGD blends and exports. In the second stage, we will introduce it to green steel, followed by heavy duty vehicle usage and seasonal storage. Subsequently, we can introduce it in all energy applications.

It is important to have a creditworthy aggregator that will put out demand for hydrogen on a regular basis. We have been working on long-term tax duty incentives in addition to building cross-sectoral policy consensus between investors and other stakeholders, before pushing for indigenous manufacturing.

We realise that there is a need to set an aggressive target for green hydrogen so as to ensure that 450 GW of renewables capacity is achieved by 2030. The targets should be based on the electrolysing capacity, and the cost of hydrogen, among other things. Also, there has to be a demand creation mandate for blending and introduction of green hydrogen in refineries, fertiliser production units and other key industries and greenfield projects within a certain cut-off date. Another policy idea that has been mooted is the introduction of dollar-linked contracts for hydrogen procurement and policy incentives for electrolysers.

We looked at different targets and our view was that in the long term, we are looking to extend hydrogen fuel to the power sector and heavy-duty trucks. In the near term, the focus is on 100 per cent green hydrogen use in new urea and refining capacity, a blending mandate for old plants in urea and refining, and green ammonia for export. In the medium term, for gas blending, we are looking at investing in R&D and undertaking a pilot for impact testing and hydrogen blending in the existing infrastructure. Besides, the steel sector is amenable and ripe for a green transition in the medium term.

In NITI Aayog’s view, green hydrogen is a unique opportunity given the low costs of renewable energy in India. A clear strategy and policy framework will help us harness the dividends from this sunrise area of growth. Quite often, we get into sunset areas where growth is very difficult because other countries have taken the lead. We must enter this industry proactively as it will also help us to reduce emissions and imports, and achieve the renewables target by 2030.