Electricity demand throughout the day is not uniform and varies with respect to the consumption pattern. For instance, during the summer months, the demand is maximum in the afternoon because industrial, commercial and residential users have cooling requirements. In India, the methods for managing peak loads are load shedding (the intentional interruption of power at pre-scheduled hours at select locations) and the use of peaking power plants.

Gujarat has never used the method of load shedding to manage peak demand. However, as per requirement, peaking power plants are run or power is purchased from the power exchange. Since peaking power plants are petroleum based, they pollute the environment more than conventional power plants. They also have a low utilisation factor (a few hundred hours per year), making the cost of power very high. To this end, demand-side management (DSM) techniques can help discoms in efficiently managing the energy requirements during peak hours. One such practice is time-of-use (ToU) tariffs or real-time pricing to reduce and manage energy consumption at the consumer end, by avoiding or limiting peak hour demands. The aim of this scheme is to shift interruptible loads to non-peak hours. Recently, a detailed study on the ToU tariff framework was done by the India Smart Grid Forum (ISGF) (supported through a grant from the Shakti Sustainable Energy Foundation (SSEF)) to assess the use and possible impact of ToU tariffs in Gujarat. Highlights from the study…

In the time to come, an increase in distributed energy resources (DERs) such as solar and wind energy will cause unanticipated peaks in the demand or generation curve. In order to meet such unanticipated peaks, huge capacity addition will be required. But at the same time, during off periods, the peak capacity will stay idle and consequentially there will be a loss of opportunity cost and system efficiency. In most cities, the last 100 MW of the peak is experienced for approximately 100 hours or even less in a year. So, setting up an entire infrastructure to meet this load would be uneconomical. 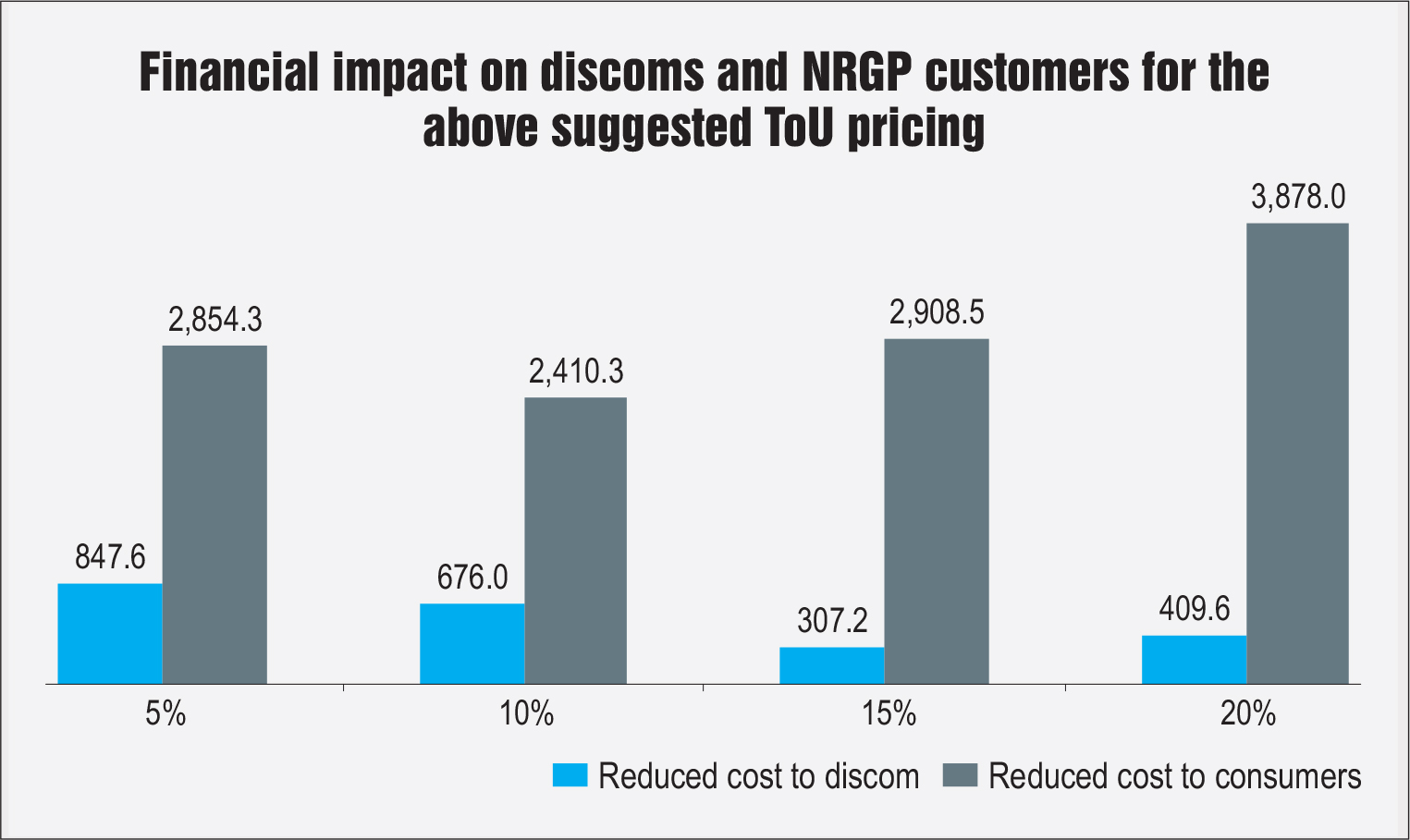 A method which can help flatten the demand curve is the use of dynamic tariff structures. These structures can help power suppliers to efficiently plan electricity generation and distribution while at the same time reducing expenditure on capacity addition. Dynamic tariff enables end-use customers to achieve demand response, that is, to plan their electricity usage in response to market signals. Thus, this method aims at reducing the overall energy consumption by shifting consumption to a different point in time.

The ToU tariff scheme, once successfully implemented, will help reduce the peak demand by 5-25 per cent. The result will be a reduction in the carbon footprint leading to a cleaner environment. The benefits of ToU tariffs are a reduction in peak demand, a decrease in AT&C losses, cutting down the use of diesel generator (DG) sets and inverters (mostly run on lead-acid batteries), avoiding the use of peaking power plants, the integration of renewable energy as baseload, controlling the charging pattern of EVs, increasing consumers’ cost savings, a reduction in the power purchase cost, the deferral of generation, transmission and distribution infrastructure upgrades, and a higher revenue due to increased tariffs during peak hours.

Scenario in Gujarat  and pilot study

As of March 2019, the thermal power generation capacity of Gujarat stood at 22.3 GW, which accounted for 69.1 per cent of the total generation capacity and 81.1 per cent of the total power generation in Gujarat. The state’s renewable energy capacity was 8.6 GW during fiscal year 2018-19. The peak demand during the day mostly occurred between 10 a.m. and 2 p.m., from July to March. For the April to June period, the peak demand mostly occurred between 2 p.m. and 7 p.m. Power distribution in Gujarat is undertaken by UGVCL, DGVCL, MGVCL, PGVCL and private distribution companies such as Torrent Power Limited and MPSEZ.

Naroda, an industrial area close to Ahmedabad, was one of the first places in the country to test smart grid pilots. In order to undertake a pilot programme for both the non-residential general purpose (NRGP) and low-tension maximum demand (LTMD) customers, Naroda was selected. The purpose of the pilot study was to shift the load of peak periods to regular/off-peak periods so as to flatten the load curve.

A simulation tool was built (based on excel) using monthly consumption data for 13 months, from January 2019 to January 2020, from the Naroda Smart Grid Pilot Project area. A 15-minute interval data of customers having smart meters was received and for each month, the consumption was averaged by the time of use in 15-minute intervals for a 24-hour period. 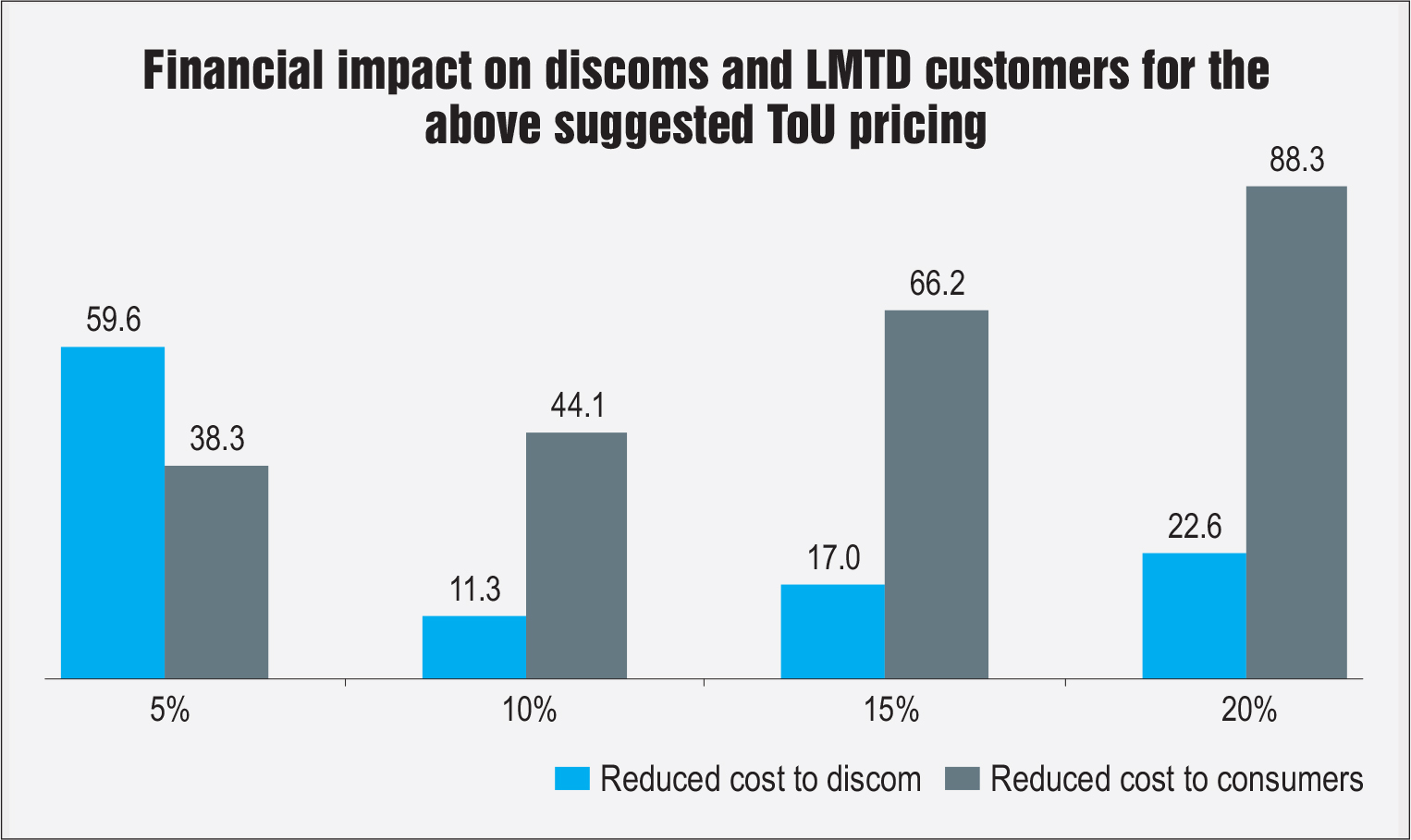 The four scenarios tested were to shift 5 per cent, 10 per cent, 15 per cent and 20 per cent of the load from peak hours to non-peak hours to assess the impact on the overall load curve as well as to estimate the savings in the power purchase cost to discoms in each of the scenarios. The tool was also used to evaluate customer savings if the load was moved from peak hours with high tariffs to regular or off-peak hours with reduced tariffs. The peak load shifting exercise has been analysed separately for the NRGP and LMTD categories of customers.

The observations are that for NRGP consumers, the peak comes around twice a day (around 11.15 and 20.15) across two quarters (April-May-June and July-August-September) and for LMTD consumers, it comes at around 13.15 and 21.15. A quarter-wise shift of these two peaks has been proposed, at different scales (5 per cent, 10 per cent, 15 per cent and 20 per cent) and the impact of these shifts on discom revenues and costs has been assessed.