The largest Middle Eastern country – Saudi Arabia – is ranked as the second major oil producer in the Organization of the Petroleum Exporting Countries. The country, which is home to around 34.8 million people, holds 17 per cent of the world’s recognised petroleum reserves and is the largest petroleum exporter. Given the abundant petroleum reserves, Saudi Arabian electricity production for decades has been dominated by oil and natural gas resources.

With the increasing global focus on transitioning to low-carbon economies, the country is now looking to reduce its carbon emissions by decreasing dependence on fossil fuels. The oil-rich country has set a target of generating half of its electricity over the next decade from clean energy sources, which is in line with the Kingdom’s Vision 2030. The latter, introduced in 2016, aims to reduce its dependence on oil, diversify its economy, and develop public service sectors such as health, education, infrastructure, recreation and tourism.

In line with this vision, in 2016 the Ministry of Energy, Industry and Mineral Resources (MEIMR) (which was later split into the Ministry of Energy and the Ministry of Industry and Mineral Resources) developed a strategic plan emphasising the need to add more natural gas and renewable energy resources to the country’s energy mix. Later in 2017, the MEIMR formed the Renewable Energy Project Development Office (REPDO) to operationalise and implement the National Renewable Energy Programme (NREP), a strategic initiative under Vision 30. As per the revised targets of the NREP, the country plans to install 27.3 GW of renewable energy capacity (mostly solar, followed by wind) by 2023 and 58.7 GW by 2050.

To fully reap the benefits of the upcoming capacity and increase regional power exchange via establishment of cross-border interconnections, state-owned electric company Saudi Electricity Company (SEC) is dedicatedly working towards establishing a robust grid network across the country. Hence, the ongoing and upcoming investments in the Kingdom’s transmission sector are directed towards expanding, strengthening and modernising the grid network. In addition, to ensure long-term health and sustainability of the Saudi Arabian power sector, the Ministry of Energy has introduced exhaustive reforms aimed at restructuring the state-owned SEC and transforming the sector into a competitive power market.

Industry structure and restructuring of SEC

The Ministry of Energy oversee the electricity sector in Saudi Arabia. Further, the Energy and Cogeneration Regulatory Authority (ECRA) regulates the power sector. The SEC, along with its subsidiaries and affiliates, is the Kingdom’s largest integrated electricity company, and owns and operates around 87 per cent of the total installed generation capacity in the country. It was established in 1998 as a joint stock company, in which the Saudi government and the centrally owned Saudi Aramco own 81 per cent shares.

ECRA, in 2007, prepared the Electricity Industry Restructuring Plan (EIRP) to propose a gradual transformation of the electricity industry from a vertically integrated utility structure to a more competitive electricity sector in three phases over eight years (though targets were not met). The EIRP aimed at unbundling the generation, transmission and distribution segments of SEC, and introducing competition in both supply and retail. 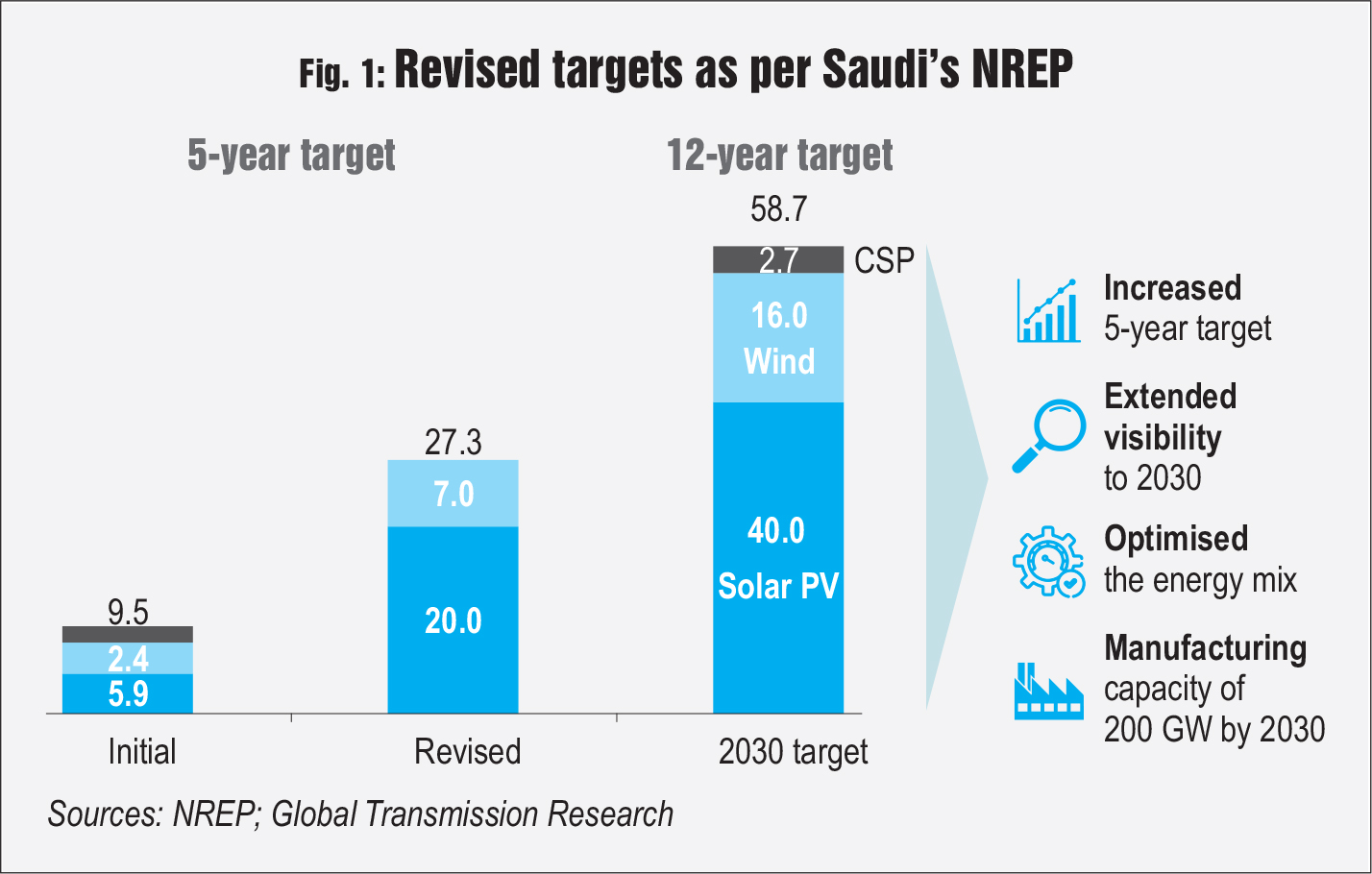 The first phase of the EIRP was implemented in 2012 by launching the National Grid SA, a wholly owned subsidiary of the SEC, to oversee and manage the transmission system, in the country. Further, in March 2020, the SEC announced plans to launch a new subsidiary focusing solely on power generation, which will operate as a stand-alone company. The plan to establish a new company was first announced in November 2018, as part of the second phase of the EIRP.

Further, all of the SEC’s electricity generation is planned to be privatised by 2025. The newly privatised power generation companies are expected to need substantial investment to increase efficiency, meet environmental standards and replace ageing power plants.

The key objective of the restructuring programme is to develop and build a competitive electricity market, which is in line with the Kingdom’s 2030 Vision and the national transformation programme (NTP). The NTP aims to develop the necessary infrastructure and create an environment that enables the public, private and non-profit sectors to achieve the vision.

By end 2020, Saudi Arabia had an installed generation capacity of 79.7 GW, of which nearly 87 per cent (69.1 GW) was owned by the SEC and the remaining 13 per cent by independent power producers (IPPs). The SEC’s capacity includes 15.9 GW of capacity that is jointly owned in partnership with other companies. The majority of the country’s capacity is based on thermal sources comprising natural gas, crude oil, diesel and heavy fuel oil.

Saudi Arabia has four interconnections with the neighbouring countries of Kuwait, Bahrain, Qatar and the UAE through the Gulf Cooperation Council interconnection project. As of 2020, Saudi Arabia’s transmission network comprised about 89,100 ckt. km of line length and 1,150 substations at 110 kV to 380 kV. Around half the network comprises of 110-132 kV transmission lines, while the SEC also owns 80,900 ckt. km of fibre optic lines and about 702,100 circuit-km of distribution lines.

In 2020, Saudi Arabia’s Ministry of Energy announced comprehensive reforms in the electricity sector aimed at ensuring a sustainable power industry in the long term in line with the goals of Vision 2030.

The reforms include – transitioning to an optimal energy mix for electricity production, with a shift to renewables and efficient natural gas sources; increasing system efficiency and reducing the use of liquid fuels for energy production; increasing the sector’s T&D network security and reliability to enable effective integration of RE; interconnecting the grid with neighbouring countries; and greater environmental compliance to reduce the power sector’s carbon footprint.

To achieve the above-mentioned goals, the SEC needs to establish a revenue requirement mechanism, which will ensure that the power utility can cover its costs of providing services, along with achieving a fair return on invested capital. The reforms thus lay critical foundations by helping to create a more solid and financially viable sector to attract the required investments.

Saudi Arabia’s NREP, being implemented by REPDO, a government agency at the Ministry of Energy, was set up to support all RE-related initiatives in the Kingdom and review all pertinent legal and regulatory frameworks.

By diversifying Saudi Arabia’s energy mix, the NREP will not only reduce the country’s dependence on oil and its greenhouse gas emissions (which is also part of the Paris Agreement), but also create jobs and promote economic development across the Kingdom.

The NREP will lead to the creation of new RE technologies and support the build-up of the sector through harnessing private sector investment and encouraging public-private partnerships.

Future transmission investments will be largely directed towards developing grid infrastructure to evacuate power from the upcoming renewable energy plants. Investments will also be envisaged for grid refurbishment and modernisation. To this end, about 5,400 ckt. km of transmission lines and 86 transformer substations will be added by the SEC between 2021 and 2023.

Over the past couple of years, the SEC has been actively tendering and awarding various transmission expansion projects (majorly to local players). The majority of the projects awarded/tendered contracts were either associated with the upcoming plants or for strengthening the existing transmission infrastructure.

As per Global Transmission Research estimates, the SEC has awarded transmission contracts worth SAR 6.8 billion for the construction of new infrastructure and expansion/extension of existing substations over the past 18 months (January 2020-July 2021). These contracts will be executed over the next two to three years and add 2,388 km of transmission line length at 132-380 kV levels.

Further, Saudi Arabia has been focusing on installing hybrid technology for its existing and upcoming substations, making it the first country in the Middle East to adopt the hybrid gas-insulated switchgear (HGIS) technology. Recently, the SEC awarded contracts for construction of a 380 kV switching HGIS substations 9098 and 9097, and installation of HGIS at the 380 kV Arar substation.

The SEC is also undertaking initiatives and programmes to establish a secure and reliable, smart and automated grid network in the country, for which it plans to accelerate its investments. During 2020, the SEC undertook a significant smart meter roll-out across the country – around 8.8 million smart meters were installed, with 100 per cent penetration planned by the end of 2021. Further, efforts are being made to create an information infrastructure, using business intelligence and integrating smart grid components.

The Egypt-Saudi Arabia grid interconnection project involves the construction of a 1,300 km long, 500 kV, multi-terminal high voltage direct current line from Badr in Egypt to El-Madinah El Munawara via Tabuk in Saudi Arabia, along with associated converter stations and switching stations in both countries. Of the total overhead line length, 820 km will be laid in Saudi Arabia and the remaining 480 km in Egypt. A 20 km submarine cable crossing the Gulf of Aqaba will also be laid to link the two countries. The project is expected to be fully commissioned by 2025.

The Jordan-Saudi Arabia interconnection project proposes to connect the power grids of Jordan and Saudi Arabia via a 164 km long line from Qurayyat (Saudi Arabia) to East Amman (Jordan). The Jordan-Saudi Arabia interconnection aims to increase network reliability for both countries and increase the use of RE resources. In August 2020, Jordan’s Ministry of Energy and Mineral Resources and Saudi Arabia’s Ministry of Energy signed a MoU on the framework for connecting the power grids of both the countries. The project is expected to be fully commissioned by 2022.

Saudi Arabia is also exploring options for establishing a grid link with Iraq, to improve the electricity situation in the latter. Saudi Arabia is also part of the Arab Common Market of Electricity, which will be an integrated electricity supply system for the power grids of the Arab countries. In mid-2020 the Arab Ministerial Council of Electricity approved two key agreements under the programme – the General Agreement and the Arab Common Market Agreement – for the functioning of the joint market. The MoU regarding the same was signed by Egypt, Kuwait, Saudi Arabia, the UAE, Bahrain, Algeria, Sudan, Iraq, Oman, Qatar, Comoros, Libya, Morocco and Yemen during the 12th session of the Arab Ministerial Council of Electricity in April 2017.

Saudi Arabia, under its Vision 2030, is implementing one of the largest renewables’ expansion plans in the region. Further, the transition towards clean energy will help greatly in decreasing its carbon footprint and positioning it as a renewable energy leader in the region. In line with the ambitious targets, the SEC is taking the necessary initiatives to create a robust and smart grid to fully evacuate power from the planned generation. Further, developing grid interconnections with Middle Eastern and African countries will not only facilitate power trade, but also boost economic growth and development in the country and the region.