Chhattisgarh’s electricity infrastructure has grown well in recent years to meet the demand of an expanding consumer base. The state’s energy supply deficit has reduced from 1.7 per cent in 2014-15 to 0.1 per cent in 2020-21, as per the Central Electricity Authority. Although the state’s peak power demand has increased from 3,817 MW to 4,682 MW in the same period, the peak power deficit has declined to zero as of March 2021 vis-à-vis 4.7 per cent in March 2015 owing to sufficient power availability. Contributing to the growth of the power sector in Chhattisgarh is the state-owned distribution company, Chhattisgarh State Power Distribution Company Limited (CSPDCL). Incorporated in January 2009, it is responsible for the distribution and retail supply of electricity to more than 5.75 million customers across the state.

CSPDCL has been taking measures to improve its performance over the years. This is reflected in the improvement of its rating from B to B+ in the Seventh Annual Integrated Rating report released by the Power Finance Corporation (October 2019). The discom’s aggregate technical and commercial (AT&C) losses have reduced significantly over the years from 22.41% to 17.3 per cent. The state has also achieved 100 per cent household electrification under the Saubhagya scheme. It has made progress under other schemes such as the Ujwal Discom Assurance Yojana (UDAY) and the Integrated Power Development Scheme (IPDS). 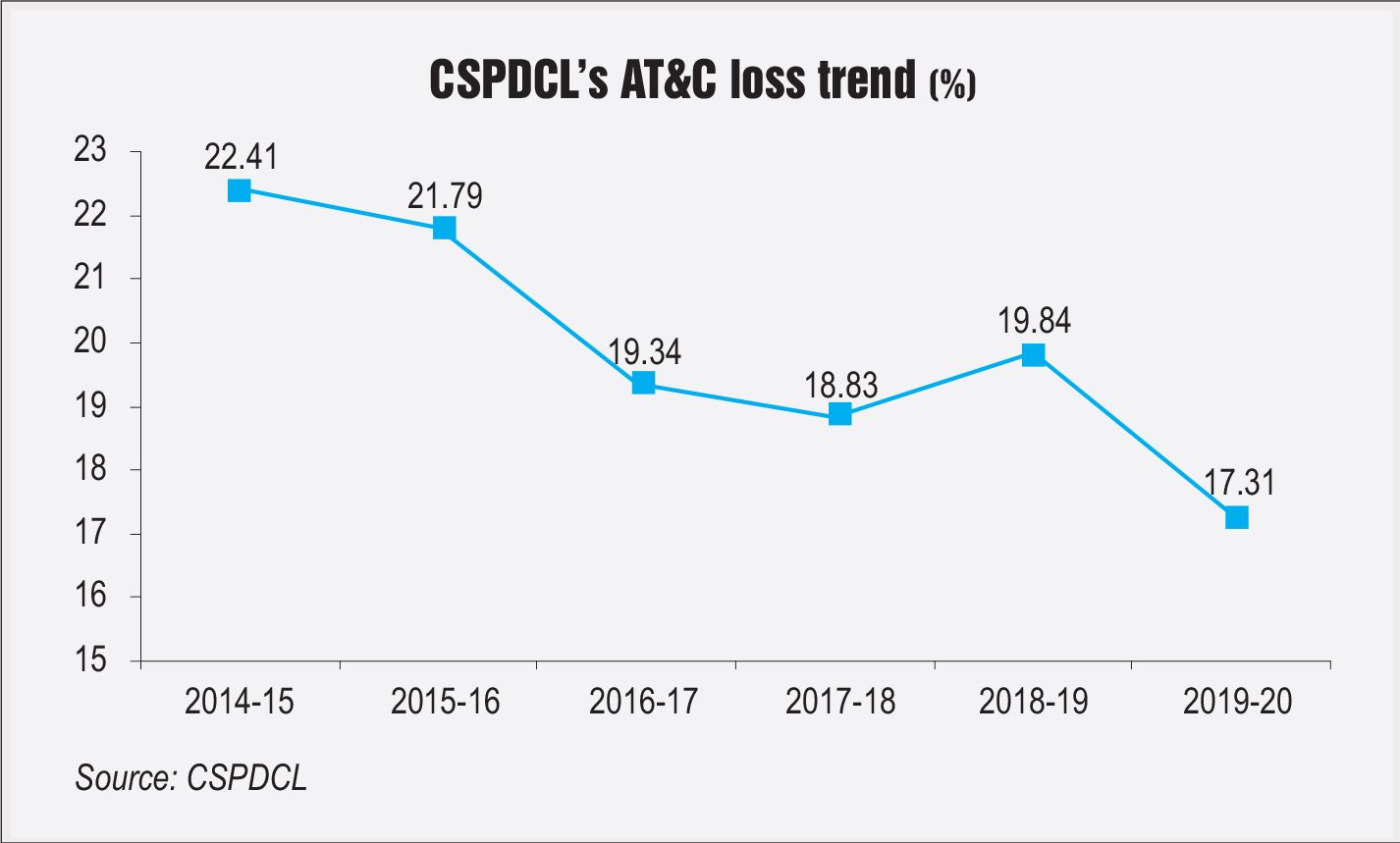 The discom has been executing several projects under central and state government schemes such as the IPDS, DDUGJY, UDAY, Mukhya Mantri Shahri Vikas Yojna (MSVY), Mukhya Mantri Majra Tola Vidyutikaran Yojana (MMMTVY), and Sub-Transmission and System Improvement [ST and SI] Scheme. As per the petition for the approval of the capital investment plan for 2021-22 (dated January 2021) filed by CSPDCL with the state regulator, the discom will meet about 83 per cent of the capex approved by the commission for 2017-21, that is, a capex of Rs 52.7 billion against Rs 63.5 billion has been/expected to be incurred during the five-year period ended March 2021. A major portion of this capex has been spent on the DDUGJY (Rs 11.65 billion), followed by pump set electrification (Rs 6.05 billion), ST and SI (Rs 5.66 billion), the MMMTVY (Rs 4.42 billion) and the IPDS (Rs 3.8 billion).

Some of the physical achievements under the IPDS are the construction of 31 33/11 kV substations, installation of 21 out of 22 planned 33/11 kV additional transformers, renovation and modernisation of 70 33/11 kV substations, and construction of new feeders. Under the DDUGJY, some of the achievements by CSPDCL are the construction of 741 km of 33 kV lines, 80 new 33/11 kV substations; and installation of 9,887 DTRs and 8,511 meters. Under the agricultural pump set energisation scheme funded by the state government, CSPDCL is extending distribution lines and installing transformers for agricultural consumers. Meanwhile, under the MSVY, the discom is strengthening the urban distribution system to meet the growing power demand through measures such as installation of aerial bunched conductors and underground cabling. 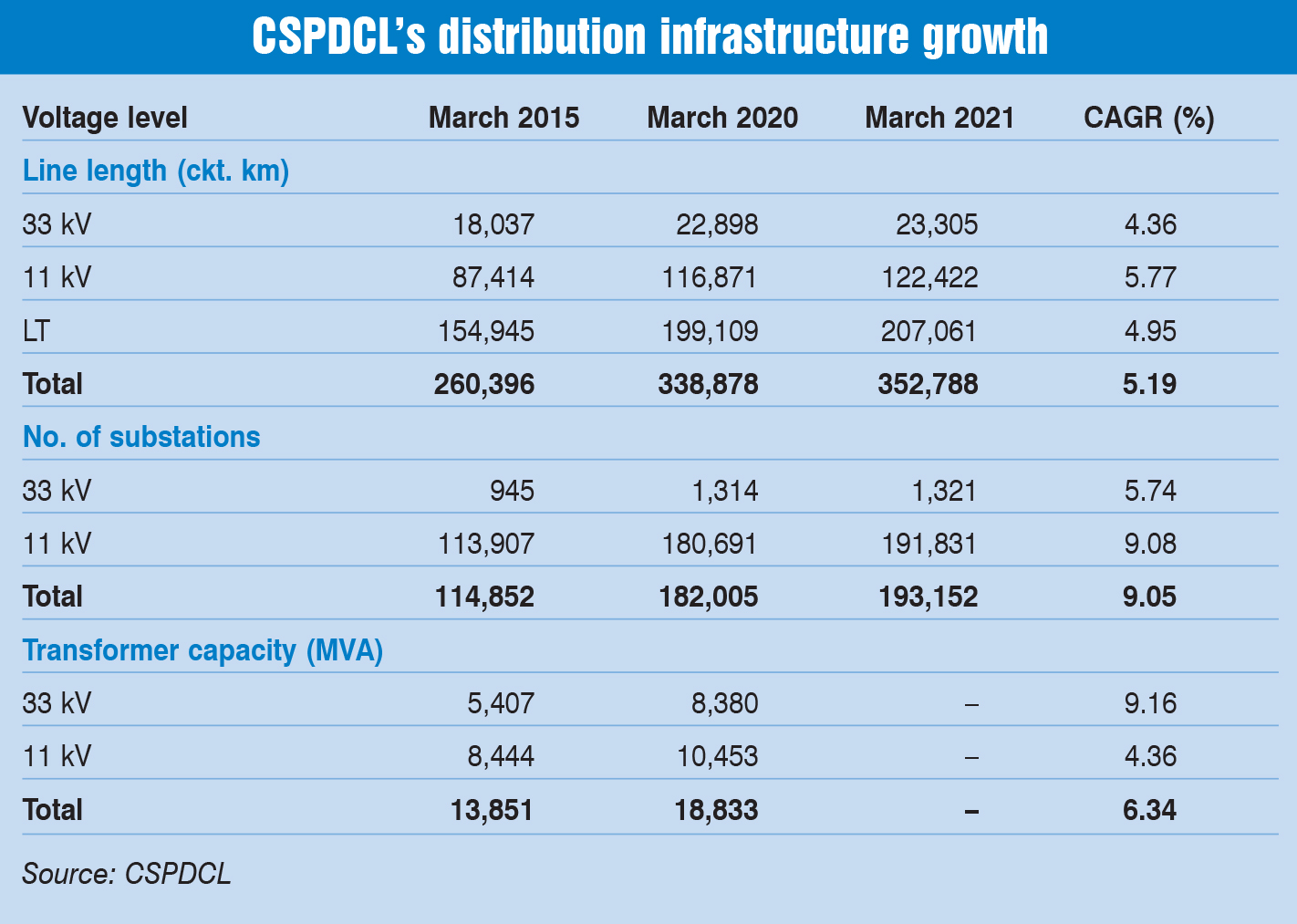 During 2019-20, the company recorded revenue (provisional) of Rs 154.54 billion, a decline of nearly 5 per cent over Rs 162 billion in the previous year. The company’s losses stood at Rs 11.03 billion in 2019-20 vis-à-vis a loss of about Rs 1.4 billion in the previous year. As of March 2020, its outstanding debt stood at Rs 38.49 billion. The total expenditure stood at Rs 164.61 billion and power purchase costs accounted for the largest proportion of expenditure at more than Rs 138 billion or 84 per cent.

For the ongoing fiscal, CSPDCL has sought CSERC’s approval to undertake a capex of Rs 21.6 billion. This includes a proposed expenditure of nearly Rs 12 billion for smart metering. CSPDCL aims to replace existing meters of 1.2 million consumers across 20 R-APDRP towns (excluding agricultural, AMR and HT connections) by smart meters. (The funding and area of supply may change in line with central government notifications with regard to smart metering.)

On the network expansion front, the company has planned an addition of 46,300 ckt. km of distribution lines, 80 ckt km of underground cables, over 48,000 substations, as well as transformer capacity of 1,880 MVA between 2020-21 and 2025-26. Net, net, the company has laid out an ambitious capacity addition plan to meet the growing electricity demand of its large consumer base.