The combustion of coal in thermal power plants (TPPs) produces finely divided particles known as fly ash as a by-product. It consists of typically spherical particles of 10-100 microns each. Its primary constituents are oxides of silicon, aluminium, iron and calcium, as well as magnesium, potassium, sodium, titanium and sulphur in a lower proportion. In India, coal/lignite-based power plants are the backbone of power generation, and hence the generation of large amounts of fly ash is a common phenomenon. Further, Indian coal is of a lower grade with higher ash content (30-55 per cent) than imported coal, which has 3-15 per cent ash content. The fly ash generated is a source of both air and water pollution.

A Central Electricity Authority (CEA) report on fly ash generation and utilisation at coal/lignite-based TPPs for the first half of 2020-21 (April-September 2020) reveals that 106 million tonnes (mt) of fly ash was generated in the given period. Of this, about 84 mt, or 79.2 per cent, was utilised, a slight improvement over the 78.2 per cent utilisation during the same period in the previous year. Over the years, the utilisation rate of fly ash in TPPs has improved. It is still below the level stipulated by the environment ministry in its latest draft fly ash utilisation notification: 100 per cent fly ash utilisation within three to five years. TPPs often face challenges in fly ash utilisation due to issues like demand-supply mismatch and limited infrastructural development.

The CEA study of 199 TPPs (104 power utilities) reveals that 84 TPPs, or 42.21 per cent of the TPPs, achieved 100 per cent or more utilisation; 24 or 12.06 per cent achieved 90-100 per cent utilisation; and 10 utilities reported no generation. There were only 32 utilities or 16.08 per cent that achieved less than 50 per cent utilisation. Of the 18 states under study, four states – Chhattisgarh, Madhya Pradesh, Odisha, and Uttar Pradesh – generated more than 10 mt of fly ash between April  and September 2020. The highest generation was by Chhattisgarh at 20 mt. Meanwhile, Gujarat, Haryana, Jharkhand, Karnataka, Rajasthan and Tamil Nadu achieved a fly ash utilisation level of more than 100 per cent, with Karnataka reporting the highest utilisation at 231 per cent. Madhya Pradesh, Uttar Pradesh and Assam achieved the least percentage of utilisation at 43.3 per cent, 56.6 per cent and 56.8 per cent res-pectively. Delhi did not generate any fly ash during the period.

There are a large number of sectors and industries that can gainfully utilise fly ash. 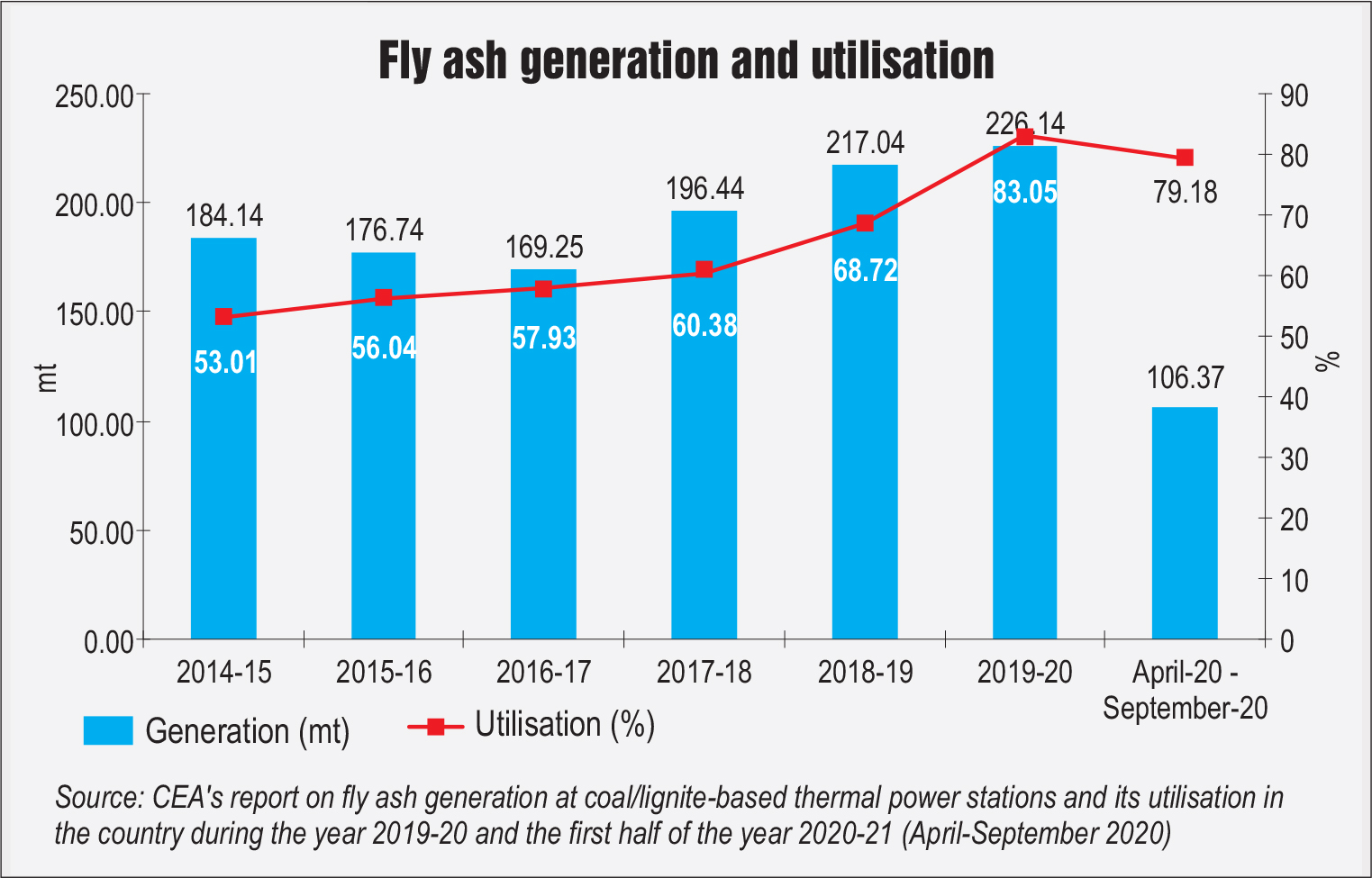 TPPs face several challenges with respect to 100 per cent fly ash utilisation. While regulations that mandate such utilisation have been in place since 2003, a substantial quantity of generated fly ash still remains unutilised, and there is a huge inventory of fly ash from previous years stored in ash ponds. This can be attributed to the demand-supply mismatch across locations due to limited infrastructure development in the region. Further, owing to Covid-induced lockdowns, the demand for fly ash from cement plants, brick manufacturing units and road construction agencies has declined significantly since March 2020. As a result, the Association of Power Producers has requested the environment ministry to not impose financial penalties on gencos for inadequate ash utilisation as per the latest draft notification by the ministry. The long distances between TPPs and cement plants as well as manufacturing units of other construction materials increase the cost of transportation (which is to be borne by the genco). Further, there are currently no facilitating platforms or mechanisms to coordinate the collection, distribution and management of fly ash. 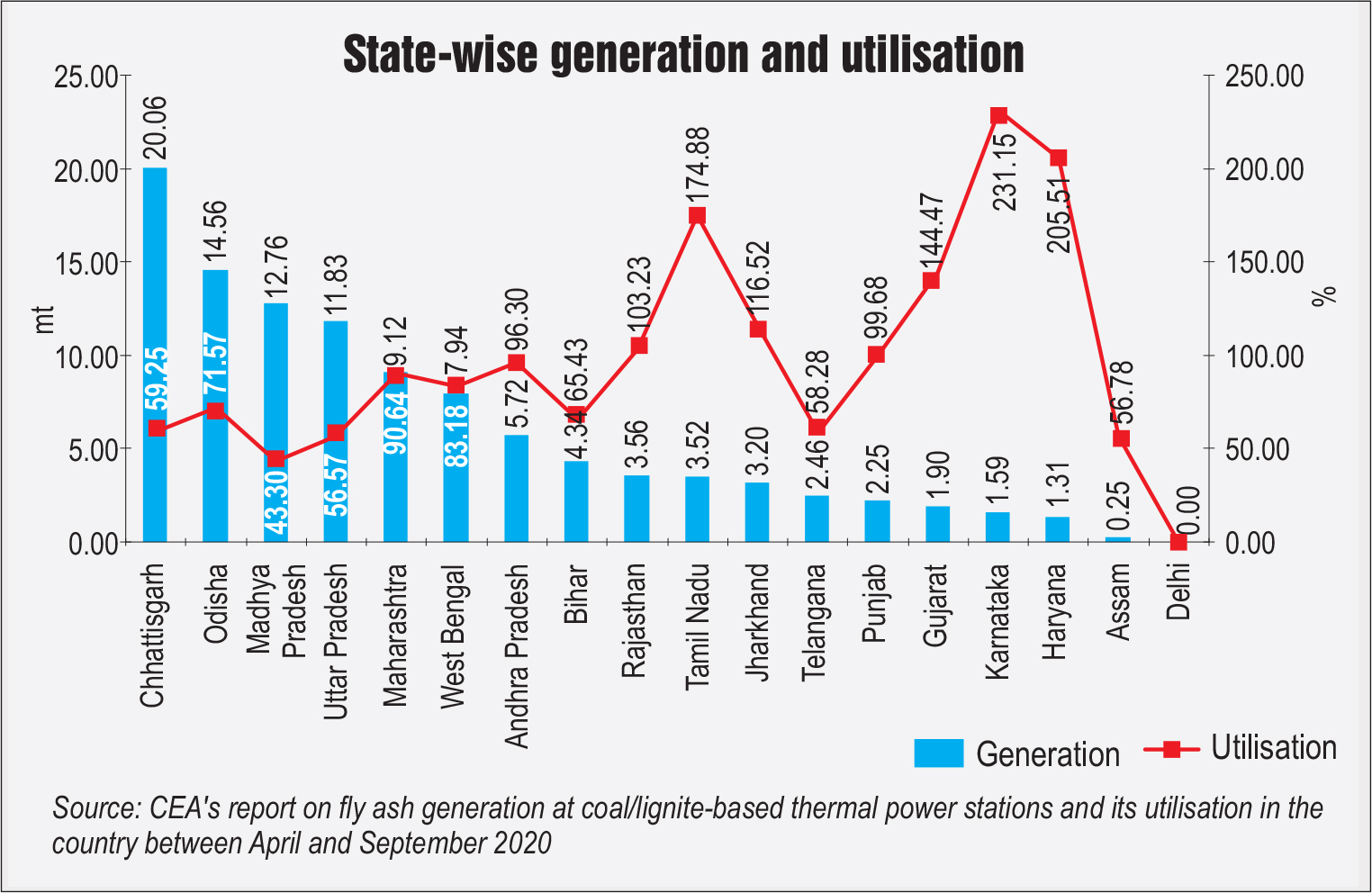 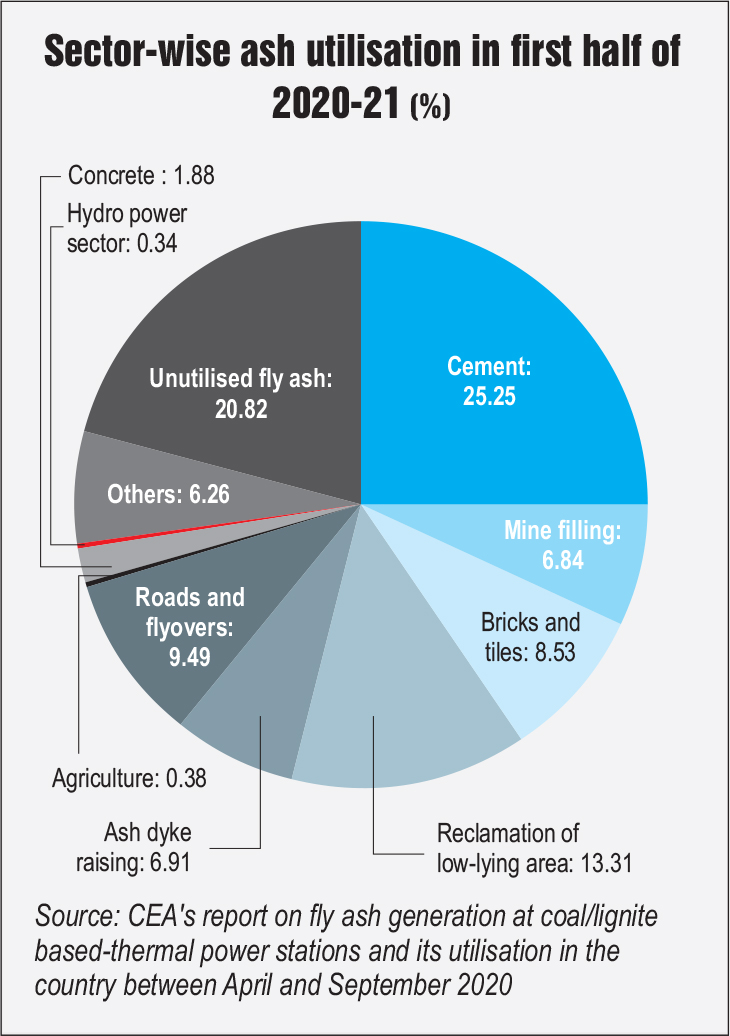 Other strategies that need to be adopted to make fly ash management and utilisation more efficient include the renovation and modernisation of TPPs with the inclusion of technological advancements for the development of dry fly ash collection, storage and disposal facilities; sensitisation of states and districts where TPPs are located to ensure the use of fly ash in the construction of buildings, roads, highways, embankments for laying railway lines, reclamation of low-lying areas, etc.; and promotion of fly ash in backfilling or stowing of closed, abandoned or running open cast and underground mines. The CEA suggests that the proper implementation of policies and encouragement in “Industry Institute Interactions” for entrepreneur development and awareness will help take fly ash utilisation to the desired level.