Coal-based power is the mainstay of the Indian electricity sector, accounting for 55 per cent of the installed power capacity. However, Indian coal has a high ash content of 30-45 per cent, resulting in huge quantities of ash generation from these power plants. In 2019-20, about 226 million tonnes (mt) of ash was generated by 197 coal-based power plants aggregating 200.7 GW of capacity. About 83 per cent of this ash was utilised for purposes such as cement and brick manufacturing, road construction, and reclamation of low-lying areas. However, the remaining unutilised ash likely ended up as slurry in ash ponds in wet form, and as an environment pollutant in dry form.

In order to contain the health hazards posed by ash, gencos need to adopt reliable ash handling solutions. They also need to comply with the stringent norms of the environment ministry, which recently issued a comprehensive draft notification on ash utilisation under the Environment (Protection) Act, 1986, stating the polluter pays principle. The draft notification has, for the first time, introduced a provision of imposing fines on plants that do not comply with the new timelines. It has also extended the deadline for thermal power plants (TPPs) to ensure 100 per cent ash utilisation by three to five years. In addition, the draft has given 10 years to TPPs to utilise the legacy ash that has been accumulated by gencos over the years.

Power Line takes a look at the latest policy developments, the current status of ash utilisation and management by gencos, the key challenges and the way forward…

The Ministry of Environment, Forest and Climate Change (MoEFCC) came out with a draft notification on ash utilisation under the Environment (Protection) Act, 1986 on April 22, 2021. The draft explains in detail the responsibilities of TPPs (including captive and co-generation plants) to dispose of fly ash and bottom ash, the methods of ash utilisation, fines for non-compliance, as well as reporting and audit requirements.

Legacy ash utilisation: The draft notification also lays down guidelines for the utilisation of legacy ash (unutilised accumulated ash), an issue that was not addressed by policymakers earlier. The legacy ash is to be utilised progressively by TPPs within 10 years from the date of publication of the notification. This would be over and above the utilisation targets prescribed for a particular year. The minimum quantity of legacy ash in percentages as mentioned in Table 2 should be utilised during the corresponding year. Legacy ash utilisation is not required where the ash pond/dyke has stabilised and the reclamation has taken place with the green belt/plantation. The concerned state pollution control board will have to certify this.

Fines for non-compliance: In the first two years of a three-year cycle, if a coal/lignite-based TPP has not achieved at least 80 per cent ash (fly ash and bottom ash) utilisation, then a fine of

Rs 1,000 per tonne of unutilised ash will be levied on non-compliant TPPs at the end of the financial year based on the annual reports submitted. Further, if it is unable to utilise 100 per cent of ash in the third year of the three-year cycle, it would be liable to pay a fine of Rs 1,000 per tonne of the unutilised quantity on which fine has not been imposed earlier. The fine will be estimated and imposed at the end of the last year of the first compliance cycle.

Utilisation modes: Regarding ash utilisation, the draft notification lists various ways such as manufacture of bricks, cement, and sintered/cold bonded ash aggregate; construction of roads, embankments and dams; filling up of low-lying areas and mine voids; establishment of shoreline protection structures in coastal districts; use in agriculture in a controlled manner based on soil testing; and export to other countries. All road/embankment construction agencies, mines and building construction agencies located within 300 km of TPPs shall mandatorily utilise ash or ash-based products in their activities, provided it is delivered at the project site free of cost and the transportation cost is borne by the TPPs.

Ashy dykes and silos: Any new TPP may be permitted an emergency/temporary ash pond with an area of 0.1 hectare per MW. Technical specifications of ash ponds/dykes will be as per the guidelines of the Central Pollution Control Board made in consultation with the Central Electricity Authority (CEA). These guidelines will also prescribe a procedure for annual certification of the ash pond/dyke based on safety, environmental pollution, available volume, mode of disposal, water consumption/conservation in disposal, ash water recycling, green belt, etc. Further, TPPs need to ensure that loading, unloading, transport, storage and disposal of ash is done in an environmentally safe manner and that all precautions to prevent air and water pollution are taken. Also, TPPs need to install dedicated dry fly ash silos for the storage of at least 16 hours of ash based on installed capacity. Each silo should have separate access roads to ease the delivery of ash. 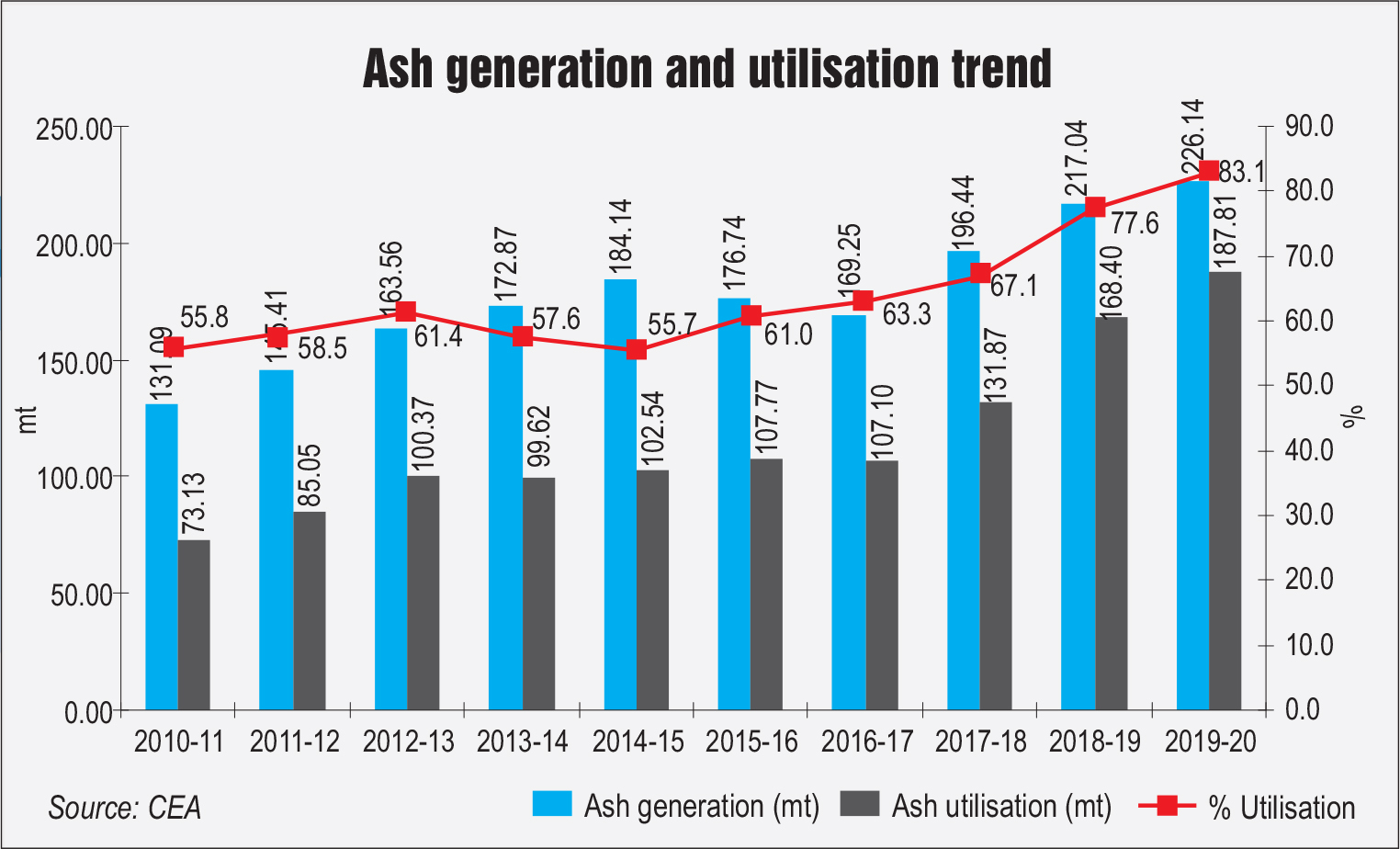 In terms of states, Gujarat, Haryana, Jharkhand, Karnataka, Rajasthan and Tamil Nadu achieved a fly ash utilisation level of more than 100 per cent, with Karnataka reporting the highest at 231.15 per cent. Madhya Pradesh, Uttar Pradesh and Assam achieved the least percentage utilisation at 43.3 per cent, 56.57 per cent and 56.78 per cent respectively.

Gencos have conventionally relied on wet ash disposal systems, but new technologies in ash disposal and conveying are now focusing on minimising water usage and eliminating wastewater generation, which augurs well for the environment. Pneumatic conveying systems are emerging as the preferred choice for handling ash in dry form. For end users, too, fly ash in dry form is preferred, especially for manufacturing cement and bricks. In addition, gencos are deploying online ash analysers that use gamma rays to measure the ash content and calorific value of coal. These analysers measure the total ash content in coal on a belt conveyor and report the results to the plant operator in real time, where it is used for informed decision-making and process control.

Further, with the use of alternative fuels like biomass and refuse-derived fuel (RDF), new equipment like flue gas treatment systems may be required to maintain ash quality. It has been observed that the ash from thermal units co-firing RDF and coal has a higher concentration of mercury and therefore a change in ash management strategies will be needed by gencos.

While the ash utilisation level of TPPs has increased over the years, it varies widely across plants and states, from 4 per cent to over 100 per cent. Since the cement industry is by far the largest consumer of ash, states like Haryana, Karnataka, Punjab, Rajasthan and Tamil Nadu, which have ample cement manufacturing capacity, are the ones with highest ash utilisation levels. Meanwhile, TPPs in regions without many cement or brick manufacturing facilities and low construction demand have poor ash utilisation records.

Overall, ash demand-supply dynamics considerably affect the utilisation efforts by TPPs. With Covid-19 affecting the economy and industrial sectors over the past year, the demand for ash and ash-based products has witnessed a decline and TPPs are struggling to find buyers. In view of this, the Association of Power Producers has requested the environment ministry to waive the proposed penalties on inadequate ash utilisation by TPPs during 2020-21 and 2021-22. In order to hedge the demand-supply variations risks, there is a need for TPPs to enter into medium- and long-term contracts with cement producers and other consumers to ensure sustained utilisation of ash.

Further, the mandatory requirement for TPPs to provide free fly ash to construction agencies, cement and brick units (within a 300 km radius of the plant) augurs well for end users, but disincentivises gencos from ensuring its quality by installing systems for dry ash collection or disposal. In many applications, ash quality in terms of fineness and level of unburnt carbon plays an important role. The government may consider mandating dry ash collection systems for TPPs and providing a transport subsidy to plants located in regions with limited demand for ash.

Another potential area of ash utilisation is backfilling of mines, particularly for gencos with captive coal/lignite mines and pithead power stations. Also, there is a need to develop mechanisms to coordinate collection, distribution and management of fly ash.

Going forward, it is imperative for gencos and consumers to ensure maximum utilisation of ash in the interest of the environment. The government’s draft notification for ash utilisation is indeed a step forward in this direction. The draft, which will be finalised after considering comments and suggestions from stakeholders, is expected to help achieve 100 per cent ash utilisation in the coming years.